We’re more than half-way through the summer and you’ve probably hit a least one beach. We scouted the sandy spots you can get to via the subway; now it’s time for go further afield, via ZipCar, the LIRR, New Jersey Transit or your own set of wheels. Most of our picks can be reached in about two hours, so make a day trip out of it, or stick around for a spell. We’ve also got recs on what else you can do in the area, from Nature Centers and aquariums to walking the boardwalk and dining at top notch restaurants. These spots are beachy keen!

Jones Beach, Long Island
The word “beach” in Jones Beach is a bit of a misnomer, because Jones Beach is actually two beaches, a pool, and so much more. Park in Parking Field 5 to visit beaches on both the ocean side and the decidedly calmer bay side. You’ll find a pool between Parking Fields 3 and 4, and you can launch a kayak at the pier near Parking Field 10. In case these swimming options aren’t enough, there are two playgrounds—one near Zach’s Bay and a bigger one near the main Art Deco pavilion. (The pavilion itself is a work of art to behold.)

For more fun: Visit the Theodore Roosevelt Nature Center on the west end of Ocean Parkway. It features a quarter-mile-long boardwalk that takes you through a dune and teaches you about area wildlife, birds, and vegetation along the way. There is also a set of whale bones on display where you can see how you and your kids measure up to a giant rib! Inside the center, various exhibits dive deeper into the local ecology.

Getting there: Jones Beach is about 45 minutes from midtown and there are two public transportation options: the LIRR to Freeport Station, then catch the N88 NICE Bus to the beach for $20.50 round trip. Or starting June 21, take the new NYC Beach Bus from Union Square or Barclays Center for $30 round trip. 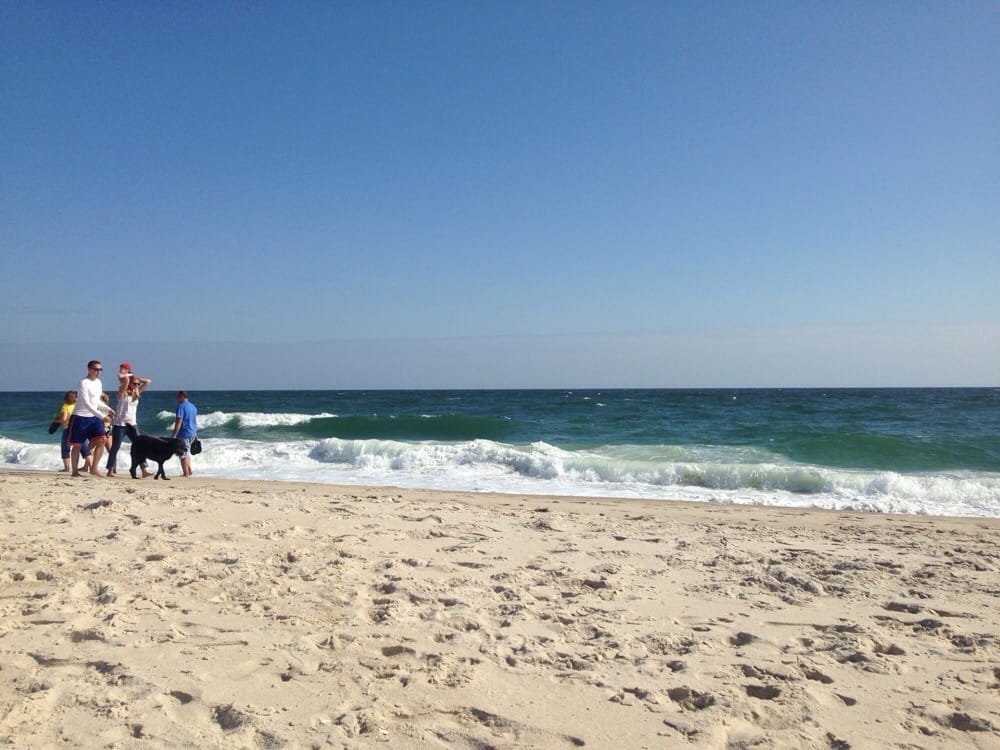 photo: via Brendan M. on Yelp

Fire Island, Long Island
Before heading to Fire Island, be sure to leave your preconceived notions of a boardwalk at home: you won’t find any rides or arcades lining these planks. The boardwalk here serves as the main artery throughout this barrier island, where walking is the main mode of transportation. No cars are allowed, and even bikes can be frowned upon—and certainly difficult to ride on the island’s many sandy paths. The island is nearly 10 square miles, but most of that is in length. You can walk between the bay and ocean beaches in about 15 minutes!

For more fun: There are plenty of restaurants, surf shops, and convenience stores around so plan to relax over a late lunch or early supper. If you want plan a longer trip but have trouble finding accommodations at the island’s B&Bs and rental homes (highly likely by this time of year), the National Park Service maintains a camp ground at Watch Hill, on the western edge.

Getting there: You can drive to any of seven ferry launch points along Long Island’s south shore. From there, you will need to park your car and hop onto a ferry for a short but spectacular ride to the beach. You can also take LIRR to Sayreville and get a shuttle to the ferry, or starting June 21, NYC Beach Bus will be making the one-hour drive to a ferry landing. 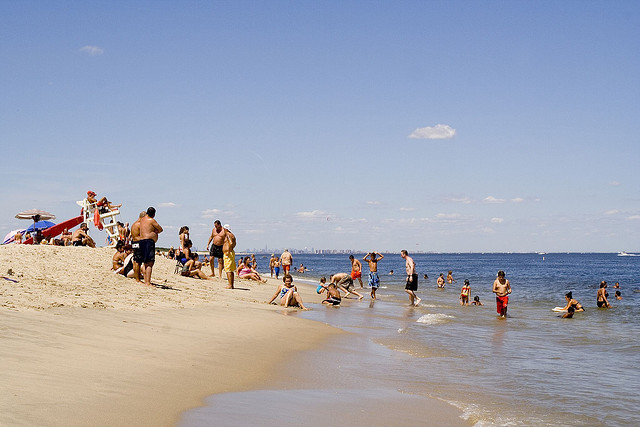 Sandy Hook, New Jersey
You can almost feel your heart rate slow as the Seastreak ferry makes the 40-minute journey through New York Harbor en route to Sandy Hook, a seven-mile-long peninsula that is part of the Gateway National Recreation Area. As Manhattan’s iconic skyline grows smaller in the distance, the unique view of the Verranzano Narrows Bridge looms large above you. It’s a thrill to pass under such an awesome span, every time. Best of all, you can take in this awesome sight from the vantage of your beach towel laid out next to your cooler on deck. The family-friendly party starts as soon as the ferry pulls away from the dock!

For more fun: With getting there being so much fun, the beach itself is the cherry on top! The ferry docks near the Fort Hancock Historic District where you can take in some colonial history or visit the historic Sandy Hook Lighthouse. Or you can catch a shuttle to five different beaches, all dotted with gourmet food carts.

Getting there: A commuter ferry year round, the Seastreak transforms into a tourist vessel in summer, making several $45 round-trip tours from East River docks at East 35th Street and Pier 11 near Wall Street. (The shuttle is included in the ferry cost.)  Kids ride free Monday through Friday, making this the perfect excuse to take a day off work!

Point Pleasant Beach, New Jersey
Further down the Jersey Shore, you will find the more quintessential beach and boardwalk scene. Point Pleasant Beach strives for a family atmosphere in a way that its counterparts further south don’t (think Snooki at Seaside Heights). The central part of the mile-long boardwalk has rides for children of all ages—some of which have been there for generations. Concessions abound, and a number of restaurants, such as Martell’s Tiki Bar, where the fare has improved and diversified over time.

For more fun: Beyond the obvious rides, there is the less-conventional attraction as you head north up the boardwalk. Jenkinson’s Aquarium is a surprisingly large and thoughtfully curated exhibit of the aquatic world, including penguins.

Getting there: Take New Jersey Transit about two hours to the Point Pleasant Beach stop ($15.50 one way for adults and $7 for children). Most trains transfer in Long Branch, but a few transfer in Newark so be sure to check with the conductor. Hop off the train, cross over the tracks, and follow the sound of seagulls due east about three-quarters of a mile “till your hat floats”—as locals will say if you ask for directions! Beach entry is between $6 and $9 for adults, and about $2 for kids under age 12. 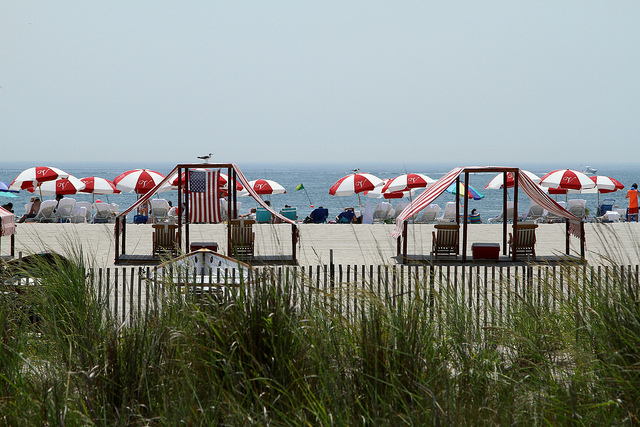 Cape May, New Jersey
Cape May and New York City couldn’t be less alike, though they share one defining fact: Both locales were first documented by Henry Hudson bobbing around the east coast in his ship the Half Moon. Today the hip-yet-quaint and very walkable Victorian town is a National Historic City and calls itself “the nation’s first beach resort.” There are too many excellent restaurants to try in a single visit, or even multiple ones, but do your best to get to the Blue Pig Tavern at the Congress Hall Inn and the Lobster House on the outskirts of town.  If you visit the latter, be sure to stock up on the preserved crab claws.

For more fun: There are no rides or arcades to be had, but history galore to be learned. Climb up the Cape May Lighthouse for more than just the stunning view. Along the way learn about the area’s geographic and human evolution, including dramatic storms and fires.

Getting there: You should plan for at least one overnight in Cape May (reserve ahead!), and doing so would help offset the five-hour ride if you take the New Jersey Transit bus.  The 140-mile drive can be done in as few as 3.5 hours, but can be many more depending on traffic. Your call—and comfort level!

What’s your NYC beach escape? Tell us in the comments below!