The New York Historical Society might not be the first place you’d think would stage an exhibit dedicated to the career and work of award-winning, bestselling children’s book author — and former Brooklynite — Mo Willems. (Although yes, his books do feature a city bus-obsessed pigeon, a Park Slope laundromat and some might say, characters with a distinct NYC sensibility.) But who really cares? The books are gems, and anyone who’s a fan of that cranky pigeon, Trixie and Knuffle Bunny, Elephant and Piggie (or any of Willems’ other charming creations) should hightail it to this new show faster than you can say “Aggle flaggle klabble!” 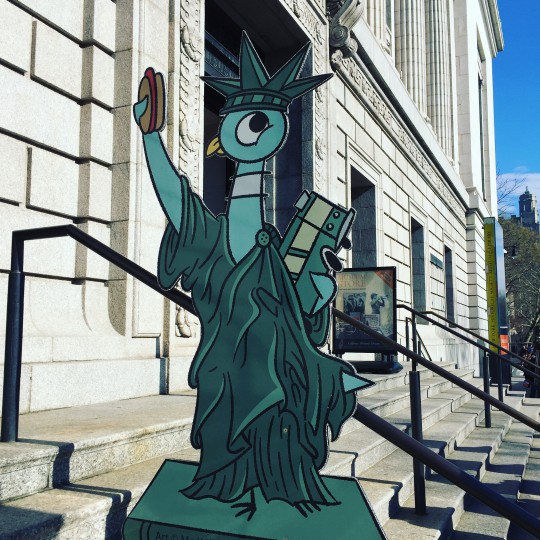 Only in New York
Originally mounted by The Eric Carle Museum of Picture Book Art in Amherst, Massachusetts (near Willems’ new hometown of Northampton) and recently on view at the High Museum of Art in Atlanta, “The Art and Whimsy of Mo Willems” at the New York Historical Society features, appropriately, a new and Big Apple-centric staging custom-designed by the museum. It’s a kid- and family-friendly exhibit for sure (if you’re a fan of the books the experience is a little bit like being surrounded by old friends) but the show is also an interesting and informative look at the creative process of one artist. The upshot: both you and the kids will love it.

On hand to open the exhibit (and appearing at signings and readings throughout the run of the show) Willems noted that he felt that his work “should not be looked at, but played” and that he hoped seeing his process would encourage kids to draw, sketch and tell their own stories. (There’s also a lesson in perseverance for young artists here: Willems’ first book, The Caldecott Award-winning Don’t Let the Pigeon Drive The Bus was rejected repeatedly by publishers with the consistent feedback, “It’s unusual.” That’s also the reason editors at its eventual publisher Hyperion, chose to buy it.)

Mo Info: In the early days, Willems inserted an illustration of himself in his books, a la Alfred Hitchcock or Martin  Scorsese cameos. Now, The Pigeon is his stand-in, and you’ll find that bird (like an “Easter Egg”) somewhere in every book. 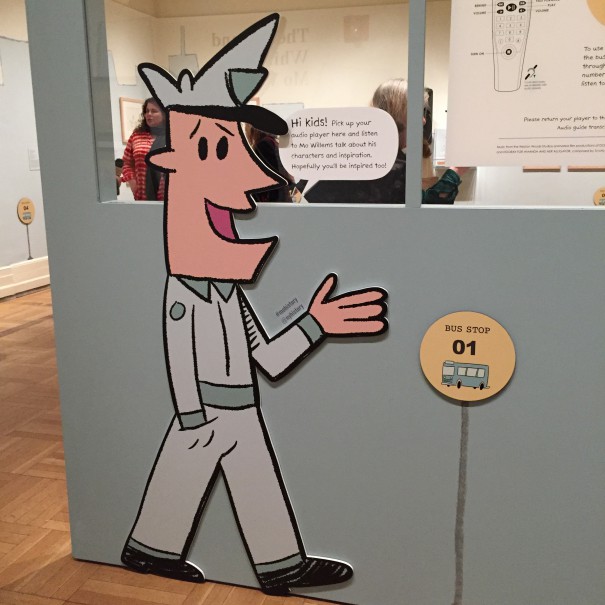 From The Street to the Slope
Upon entering the exhibit, visitors are immediately greeted by “The Bus Driver”, who encourages them to pick up the kid-friendly audio tour; it’s narrated by Willems himself, and includes lots of fun insights into his work throughout the three galleries.

The show begins with some animation cells from Willems’ work as a student at NYU’s Tisch School of the Arts and Sesame Street, and touches upon other early work such as the Cartoon Network animated series Sheep in the Big City and the 9/11-themed graphic short story he did for DC Comics, “Walking the Williamsburg Bridge to Work”. From there, the beloved cast of characters is rolled out against a mural of the skyline of NYC, with dozens of works that show the many drafts, sketches, mockups and more that go into creating Willems’ whimsical world and its inhabitants.

Mo Info: When reviewing the original story for Knuffle Bunny: A Cautionary Tale, editors expressed concern that kids outside of NYC would not be familiar with the concept of “the laundromat.” Willems’ response was, “Well they will be after they read this book.” And for interested Slope residents: as far as Willems knows, the Knuffle Bunny statue at the 6th Ave. library branch is still happening. 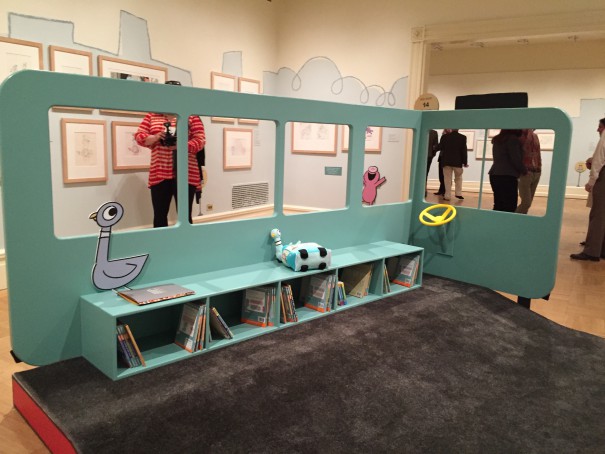 Hop On the Bus
In an exhibit dedicated to the work of a children’s book author, it makes sense that there would be a place to sit down for a read. A reading bench stocked with Willems’ work can be found in the first gallery, but the show-stopper is in the center of the second: a giant bus illustration outfitted with seats, “windows” and yes, the Pigeon. (But he is still not driving! Poor pigeon.)

Lest you fear that it’s all-Pigeon-all-the-time here, it’s not. Nearly all of Willems’ books and characters are featured in various forms, stages and mediums — from wire sculpture to video to final illustrations — including Amanda and her Alligator, Leonardo the Terrible Monster and Naked Mole Rat.

Mo Info: Willems tells that he wrote a fan letter to one of his idols, Peanuts creator Charles Schultz, expressing his admiration as well as the request to “have the cartoonist’s job when he was dead.” Schultz never answered — because Willems’ parents never sent the letter. However, you can see pages of Naked Mole Rat in this exhibit that are drawn with a pen nib of Schultz’s, gifted to Willems by the Schultz family. 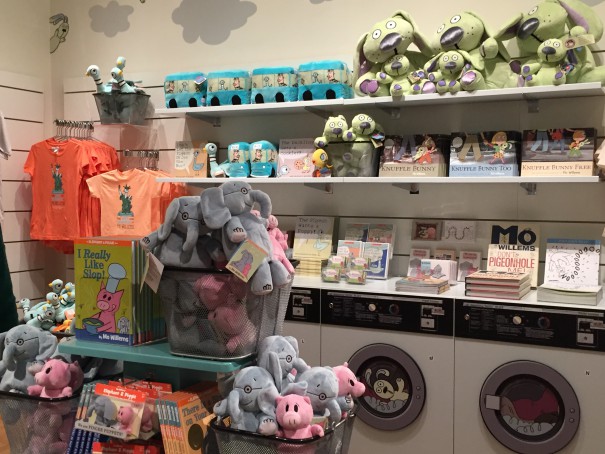 Don’t Forget Your Wallet
Other highlights include art from the forthcoming — and final! — installment in the Elephant & Piggie book series, The Thank you Book, which Willems sees as an expression of gratitude to his readers, and the pop-up “Moseum,” where every imaginable piece of Mo Willems merchandise, including a special edition T-shirt is for sale, much of it arranged atop of “washing machines” taking Knuffle Bunny for a spin. (Hey, Trixie — who’s now a teenager and is screening her doc “Team Mo” at the Society during the show’s run — has to go to college, right?)

Mo Info: Re: “Knuffle Bunny.” Is that really what his daughter called her rabbit? Unlikely. And its original incarnation in the book?: A bear. (You can see that draft illustration in this show as well.)

What’s your family’s favorite Mo Willems book? Tell us in the comments below!