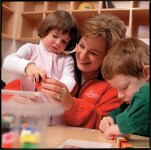 Living in NYC, we’re surrounded by choices, and when it comes to picking a summer camp for the kid, things are no different. It can be tough: Sports? Overnight? STEM? Theater? What if you (or more to the point, the camper in the family) didn’t have to choose? What if they could do it all, or just one, just the way they wanted? That’s essentially the promise of Steve & Kate’s Camp, a West Coast-bred day camp chain debuting in the East Village this summer. Read on to get the scoop on the outfit that’s disrupting the summer camp space.

Launched in the Bay Area 34 years ago (and now counting cities such as Chicago, L.A. and Portland home as well)  the cornerstone of Steve & Kate’s Camp is the philosophy of self-directed play. That is, kids are presented with a wide range of activities each day, and can choose which ones to engage in, and how much — which, of course, can change from one day to the next. Counselors are on hand to guide, facilitate and support kids’ activities, but not direct or judge them. (Underlying all that freedom is the idea that when a child is truly engaged in and enjoying an activity, they are also in the optimal state to be creative and learn.)

Wait. So My Kid Could Play Kickball One Day and Spend the Next Working on a Short Film? And Then Sew and Code?

Actually, yes. Steve & Kate’s Camp offers kids six “creative studios” to explore according to a child’s preference each day: animation, coding, music, knitting and style, dance and breadmaking. In addition to these studios (which are stocked with supplies and top-notch equipment), the camp provides space to both run around and play (in the East Village facility’s gymnasium or on the roof deck) or chill out in a lounge space with a graphic novel, strategy game or some other more subdued activity.

The camp also brings in “Show Specials” at least once a week, which often feature other young people doing potentially inspiring things. Examples include a stage combat workshop led by child actors, a performance by a young dance troupe, a violin prodigy, or a reptile show. The NYC Steve & Kate’s plans on tapping the rich creative community of the city and surrounding area and making the most of it, for both performers and the camp’s staff.

Other features: a filmmaker-in-residence, who collaborates with kids to write, shoot and edit movies to be shown at a Camper Showcase at all 39 Steve & Kate’s Camps nationwide; a daily opportunity to share one’s work (a drawing, a video game, a fashion design) and a barcode which tracks every camper’s projects and is used to send digital projects home (welcome to camp in the 21st century).

Steve & Kate’s choose-your-own-adventure ethos extends to mealtime, too, and campers can sample a variety of daily dishes or just eat one. (Both breakfast and lunch are available.) A menu designed by Google’s former Executive Chef Nate Keller features both popular kids’ fare like mac ‘n’ cheese and quesadillas as well as more adventurous options such as coq au vin and eggplant parm. Whenever possible, Steve & Kate’s uses local and organic ingredients, and campers can expect to sample dishes inspired by Italian, Mexican, Japanese and French cuisines, with vegetarian and gluten-free options as well.

Steve & Kate’s Camp is open to kids ages four to 12, and will touch down on the Lower East Side at the World Class Learning Academy at 44 E. 2nd Street this year; the camp plans to open a second location near Columbus Circle in 2016. The camp is open from 7:30 a.m. to 6 p.m.

Both “Day Pass” and summer “Membership” rates are available, with day rates starting at $95/day (buy in multiples and you get a discount), and the summer costing $2,625. Parents will probably be pleased to know that the camp’s philosophy of flexibility extends to them, too: if you overbuy and don’t use all your day passes (or if you don’t use at least 35 days of a membership plan) the camp will refund the cost of the unused days.

Do you know someone who’s tried Steve & Kate’s? Tell us about it in the comments below!