Whether you were a club kid back in the day (like, way back) or your child is a budding dance floor king or queen, listen up: the pumping cool kid’s dance party CirKiz is back for its second season, and it’s in new digs to accommodate even more petite partiers. Read on to get the scoop on this disco ball-filled and glowing kid-friendly rave, and details on the next time you and the kids can get down. 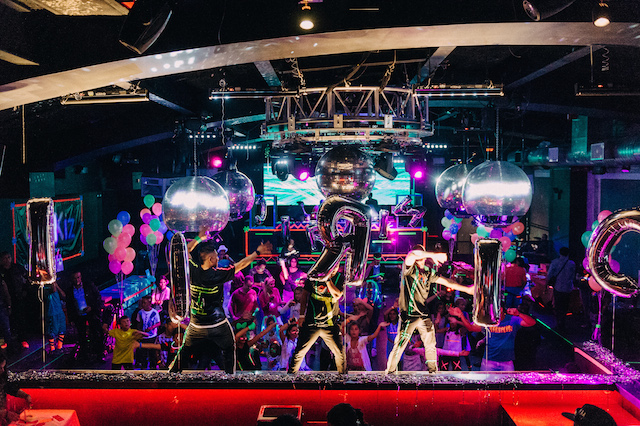 CirKiz
Created by New York nightclub veterans (and parents) Jesse Sprague and Jenny Song, CirKiz is a dance party for kids that seeks to create a cutting edge NYC dance club environment that’s also family-friendly, safe and controlled. After a successful inaugural season last year, CirKiz is back this fall, moving to the larger West side club Space Ibiza NY to make room for more revelers. (This is one of the places where big club kids dance ’til dawn.) Held on weekend afternoons, the dance parties, designed for kids ages six to 12 years old, include not only lots of getting down to electronic dance music (EDM), current club music and mixes, but plenty of extra activities and diversions.

Beyond Dancing
In addition to dancing like mad fools under over-sized disco balls and flashing lights, CirKiz features guest DJs (such as 9 year-old DJ Alden, who mixes with chaperone dad at his side); a squad of dancers that perform hip-hop routines and give dance lessons; DJ lessons, and a “glow station”, where kids can cover themselves with as much florescent glow tape as they wish. Additionally, an LED-laden “robot” dubbed “The Dream Lab”, dances with kids, shoots “smoke” and generally acts as a sort of high-tech Pied Piper (the kids love this guy). Towards the end of the party, a good-natured dance contest recognizes kids with the best moves.

DJ Alden in the booth photo by Filip Wolak

Extras
Food ranging from pizza, cupcakes and cookies and drinks including fruity mocktails and soda are for sale; mini bottles of water are free of charge. If you know your kid would flip for this, birthday party packages are also available, with separate “VIP” areas for seating a celebration.

And FYI, if you do find yourself at CirKiz, there’s no way you’re getting out of there without buying some sort of glowing, blinking device, conveniently on sale at a table right outside the doors to the dance floor. (Crazy hair headpieces will set you back $10, but kids will find plenty of other cool stuff for $5 or less.)

The Vibe
If you aren’t a club-going type yourself, first contact with CirKiz can be kind of intense. (This is not a “crazy” dance party featuring the Jackson Five’s “ABC” at mid-volume in a sunlit room.) It’s thumping club music in a pretty dark space lit by colored lights and disco balls — with kids (and parents) dancing with various glowing and blinking things on them. Note: earplugs are available!

That said, you get used to it pretty quickly, and we didn’t see a single kid — or person, really — having a bad time. While the event is geared towards kids ages six and up, all ages are welcome and do attend. We brought a three year old, who ended up rocking out big time, and even finding a similarly-aged dance partner; they had a blast. (For the record, all adults must be accompanied by kids.)

When you Can Go
The next CirKiz event will take place on October 25 and will feature a Halloween theme, with a costume contest and more. Another dance party will be held on November 15. Tickets can be purchased for $20 per person at CirKiz.com.

Has your family attended CirKiz? Tell us what you thought of it in the comments below!