Ready to head back to the theater? There are lots of live kids shows in NYC ready to entertain with family-friendly fare. Broadway favorites like Wicked and The Lion King are going strong, puppet shows are playing, and new takes on kid classics are taking to the stage. Plus: The Story Pirates, Dogman and so many bubbles. (A gazillion, in fact.) For more spring fun, check out our Must-Do in NYC for the season, the new free and fun events around town and where to head out on a spring day trip when it’s time for an adventure. (And if you’re headed to a show, don’t forget to check the theater’s vaccine and mask requirements, as policies vary.)

Goldilocks and the Three Bears

For a new take on a children’s classic, check out this show at 92Y. The setup: It’s the first day at Camp Yomi and Goldilocks finds herself in quite a porridge with three of the nicest tap-dancing bears you could ever hope to meet. It’s part of the Theater for Young Audiences series, which features modern shows for families with kids ages 2-11. Masks must be worn by all 2 ages and older and proof of vaccination is required.

The Barber of Seville

New York City Opera presents a family-friendly version of The Barber of Seville. Gioachino Rossini’s sparkling music animates the hijinks of Figaro, opera’s most famous barber. The performance is 75 minutes, sung in Italian, and is appropriate for all ages. New York City Opera’s Opera for Kids! program is a popular series of hour-long, family-friendly adaptations of classic operas narrated by General Director Michael Capasso. These performances, followed by a Q&A with the cast, have given thousands of elementary and preschool-aged children their first taste of live opera.

One of the premier producers of children’s theater in New York City, the New Victory Theater is currently offering Stono from Step Afrika! on demand for $15 through May 22. A story of resistance, resilience and reclamation, Stono fills the screen with music and dance to honor the artistry and activism borne out of the body as a percussive instrument. From traditions of the ring shout to contemporary stepping, Step Afrika! reveals the hidden histories and resounding rhythms that transformed America.

From June 4-26 the theater will present Leonardo! A Wonderful Show About a Terrible Monster, featuring a story by children’s author Mo Willems. Leonardo tries so hard to be scary. But… he just isn’t. When he searches far and wide for a friend to frighten, he discovers Sam, who is scared of anything and everything! With puppets, projections and live music, this performance will surprise you with its cinema-sized story about fright, feelings and friendship. It’s recommended for kids ages 4-7. Tickets are $25. 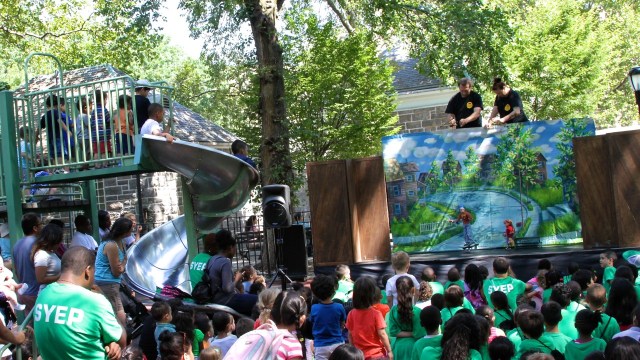 The CityParks PuppetMobile is the oldest continually operating company of its kind in the country and you can enjoy its shows for free. From May to October, you can catch an updated version of Little Red Riding Hood, “Little Red’s Hood.” (She’s a city dweller who is obsessed with her smartphone.) Performances are held in parks in every borough, in English, Spanish and Mandarin.

See when the Puppetmobile will be in a park near you!

The Omnium Circus is part of the Forward Festival of the Arts, the Queens Theatre’s national festival highlighting the artistry of Deaf/Disabled performers. Its diverse cast from all over the globe is multitalented, multi-racial and multi-abled. The show “I’Mpossible,” tells the story of a young boy who dreams of joining the circus. Join Johny as he enters a world of beautiful aerial artistry, flying hula hoops, the daring art of free-standing ladder, Cyr wheel, contortion, and more. Along the way, he encounters the antics of the King Charles Unicycle basketball troupe and the hilarious comedy of Rob and Miss Jane.

Full Radius Dance, a professional physically integrated modern dance company based in Atlanta, GA, is also performing as part of the Queens Theatre’s Forward Festival of the Arts. During Alice, Peter, and Dorothy, the company examines the fantasy novels Alice in Wonderland, Peter and Wendy, and The Wizard of Oz through a disability-centric lens, asking, “How does disability inform the authors’ work? What rhetoric in the novels minimalizes and/or normalizes the visual or invisible mark of disability?” In Undercurrents, dancers flow on and off the stage in currents of movement, pulling the dance in unexpected directions. Partnerships are created and washed away, subtle shifts create dramatic effects, and hidden feelings and impulses run below the surface. 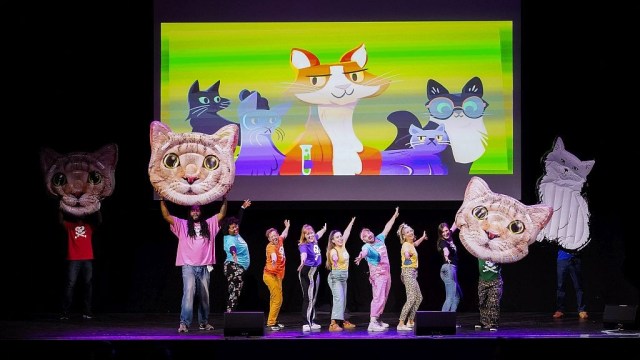 The Story Pirates: Cats Sit On You

Love The Story Pirates? (Who doesn’t?) Now’s your chance to see The Story Pirates live on stage, featuring Lee and Peter from the popular Story Pirates Podcast. If you’ve never seen them live, you’ll be amazed (and very entertained) as the Pirates bring ideas suggested by kids in the audience to life on the spot with inspired improvisation. Plus: fun and silly songs. This performance is a benefit for Story Pirates Changemakers, The Story Pirates’ non-profit arm that is committed to making Story Pirates programs accessible to under-resourced kids and families. It’s a win-win all around.

If you missed the Sesame Street gang at MSG this spring, take heart. Those who need to see Elmo and crew can head to the UBS Area in Belmont Park, NY. This is an all-new, interactive show that unfolds on one of the world’s most famous streets at the funniest, furriest party in the neighborhood. Learn new songs and sing along to familiar favorites with Oscar and Cookie Monster; build a snowman with Elmo; flap your wings with Big Bird; marvel at Abby’s magic; be amazed when Super Grover flies, and move to the rhythm with Rosita. You can see it a few times throughout the day, with doors opening at 9:30 a.m. for the earliest! 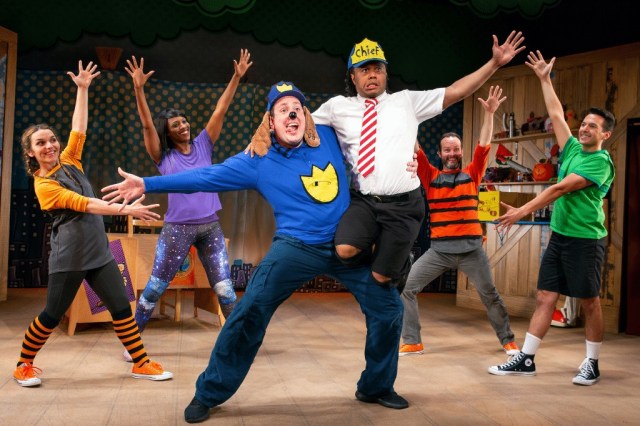 Dog Man: The Musical, based on the popular book series by Dav Pilkey (who also created the beloved character Captain Underpants) is a new production that follows the chronicles of Dog Man, who with the head of a dog and the body of a policeman, loves to fight crime and chew on the furniture. But while trying his best to be a good boy, he must save the city from Flippy the cyborg fish and his army of Beasty Buildings. It’s an epic musical adventure with lots of laughs and lots of heart. Recommended for ages 6-10. 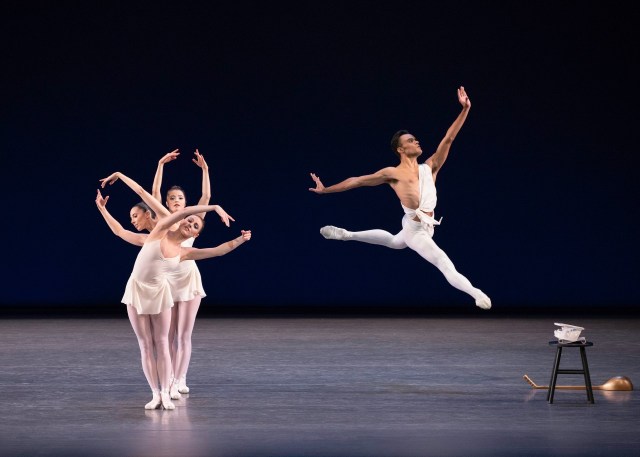 The George Balanchine ballet that opened the New York City Ballet’s first season in 1964 returns to close the 2022 season. Shakespeare’s tale of love and romance, forest fairies, intrigue and mischief is set to Felix Mendelssohn’s score. The final performance of A Midsummer Night’s Dream on Sunday, May 29 at 3 p.m. will also be the farewell performance for Principal Dancer Amar Ramasar, who joined he ballet in 2001. 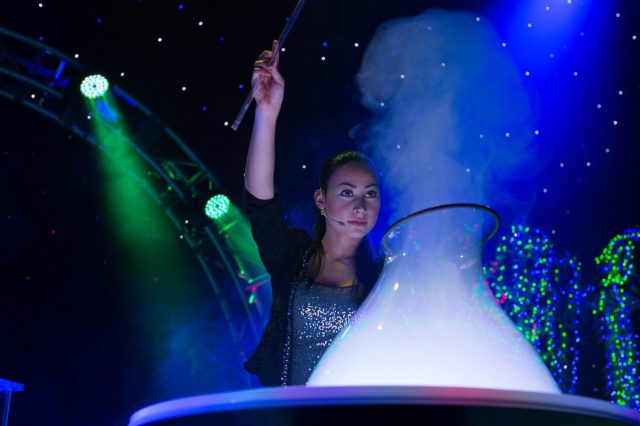 The Gazillion Bubble Show is back at New World Stages. The hour-long bubble spectacle features bubble magic, bubble sculptures, lasers, lighting effects and more. You may even find yourself in a giant bubble (if you’re lucky). 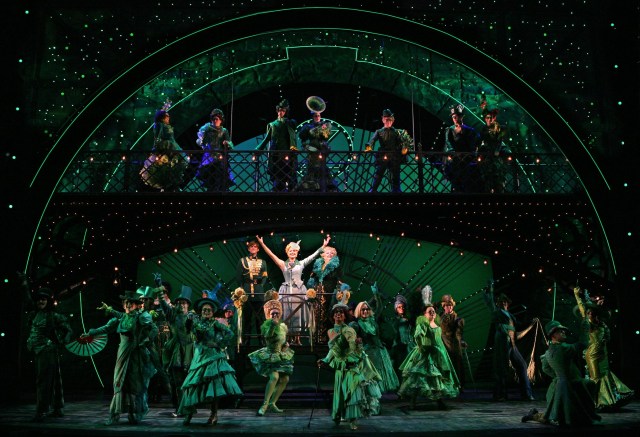 Wicked has been rocking it at the Gershwin Theatre since 2003, and you can still drop into Oz today. The musical tells the tale of what happened before Dorothy Gale arrived, when Glinda the “good” witch and Elphaba (AKA the green-skinned Wicked Witch of the West) were first rivals, and then friends. You get big show-stopping numbers, incredible costumes and sets, and a story about how relationships, romantic and otherwise, are often complicated. (Plus, for fans of the original movie, some cool “origin stories.”) The show is recommended for ages eight and up, and no one under five is admitted. It runs two hours and 45 minutes with a 15-minute intermission. (Added bonus: the Gershwin Theatre is filled with Broadway memorabilia and photos of the many, many stage legends who have performed there over the decades.)

Based on the 1994 Disney movie, The Lion King is another longtime Broadway favorite. (It opened in 1997 and more than 100 million people have seen the show.) There’s a reason: between Julie Taymor’s incredible vision, transforming performers into the animals of Africa’s grassy plains and Elton John’s stirring music, it’s a one-of-a-kind spectacle. Insider tip: for maximum “wow” factor, grab an aisle seat to get close-up views of performers entering the theater in all their glory. The Lion King is recommended for kids ages six and up; no children under two are admitted and all audience members must have a ticket. It runs two hours and 30 minutes.

Your May To-Do List: Free & Fun Things To Do With Kids in NYC
Fresh Air Fun: The Best Spring Day Trips from NYC for Kids
Culture Club: NYC Museum Shows for Kids