25 Natural Swimming Holes to Put on Your Bucket List

12 Airbnbs Near the Beach to Get the Summer Vibes Going

7 Reasons to Travel with Kids, No Matter How Young They Are

Muggles, rejoice! The Wizarding World of Harry Potter at Universal Studios Hollywood conjures up a portkey in Hollywood that lands you directly in Hogsmeade. Snack on chocolate frogs, sip Butterbeer, peruse magic wands, and brave an in-the-dark, 3D journey through Hogwarts castle. While you can read about the new world everywhere, only Red Tricycle is giving you all the deets parents really need. Read on for everything you need to know to make a visit to Harry’s world simply, well, magical. 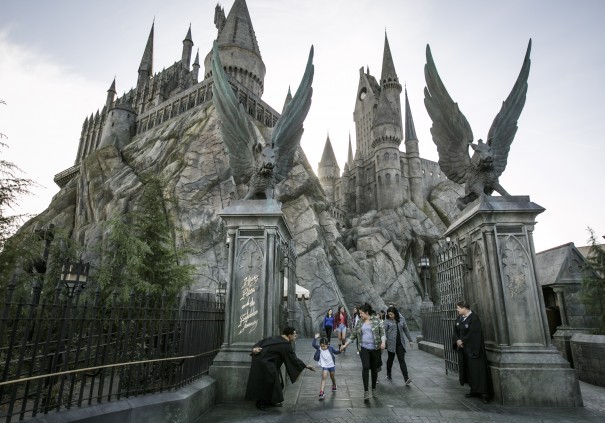 Hop On Your Broomstick, Or Hold Off?
You might be ready to get the magic started, but before you drop a bundle on tickets, you should probably figure out whether the trip will be a blast or a bust for your little wand waver. If your kiddo likes Harry Potter—or just the idea of swishing a wand around and making things happen—she’ll love almost everything about this place. Aside from the Forbidden Journey (which is best for older kids), there’s not much here that is scary or offensive to the under-7 set. Younger kids will certainly be happy to troll the candy aisles at Honeydukes and check out the wands inside Ollivanders. That said, Wizarding World (like most of the rides at Universal Studios) is probably best suited for kids 7 & up.

Kids who are already well-versed in all-things-Potter will have the best time, since every nook and cranny is inspired by J.K. Rowling’s sprawling imagination. Don’t worry though: If you’re new to Hogwarts, the immersive magic will still thrill. And, if you still don’t know how Harry’s story ends, don’t fret; there aren’t any spoilers. 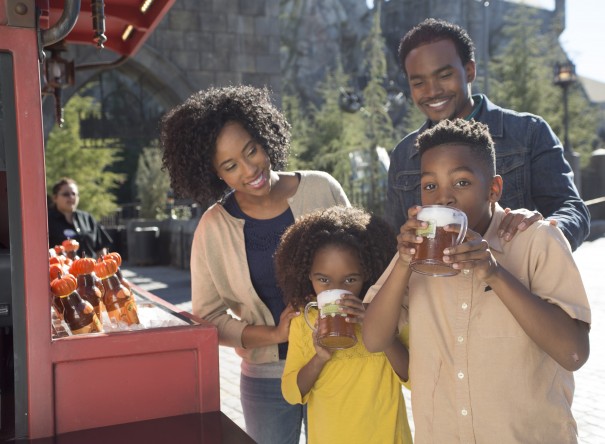 Spectacular Scale (And We Don’t Mean From A Hungarian Horntail)
The first thing you’ll probably notice (and the first place you should go) as you walk through the gates of Wizarding World is Hogwarts Castle. Designers wanted the towering replica of Harry’s beloved school to look as if it were 1,000 feet tall (in reality it’s just a quarter of that). The castle looms at the far end of the land; to get there, visitors must cross Hogsmeade Village, meandering past dusty-looking shops, a cappella frog choirs, and numerous beverage carts selling yummy, cream-topped, nonalcoholic Butterbeer (hint: get it frozen). 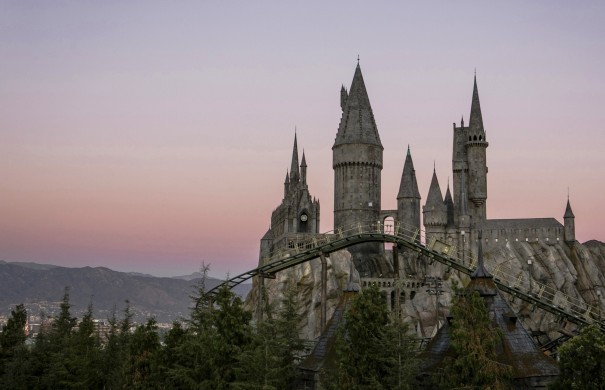 The Forbidden Journey: Fabulous, But Forbidden to Wee Wizards
Potter fans will love every minute, but younger kids will be seriously disturbed by this well-crafted 3D motion thrill ride, which launches riders smack dab into Harry’s magical and dark world. You’ll whip past monstrously large spiders, get a little too close to sinister-looking dementors, and feel the heat of fire-breathing dragons as you follow Harry and his friends out of harm’s way. It’s intense and extremely dizzying (hint: don’t eat first), but worth the wait if your tummy can take it.  If you’re on the fence, we say try it; since it’s not an acutal roller coaster, kids can always close their eyes to make most of the motion stop.  Recommended age: 8 & up (and kids must be at least 48″ to ride, even if they’re immune to the motion).

Speaking of that wait, there’s plenty to discover while zigzagging your way through the line inside the castle. Check out the wall of talking portraits (listen closely: they might be talking about you, Muggles!); get a peek inside Dumbledore’s office; check out the animatronic sorting hat; and stand inside the Defense Against the Dark Arts classroom while Hermione, Harry, and Weasley tell you a little bit about the ride.

Timid Riders tip: The line is almost more fun than the ride, so don’t skip it no matter what! For kids who are too young (or too scared) to ride, ask a line attendant for a tour of the castle. Tours are given freely upon request, so even non-riders can marvel at the interior of Hogwarts. There is also a child switch area so parents can take turns riding the ride while their little one waits. 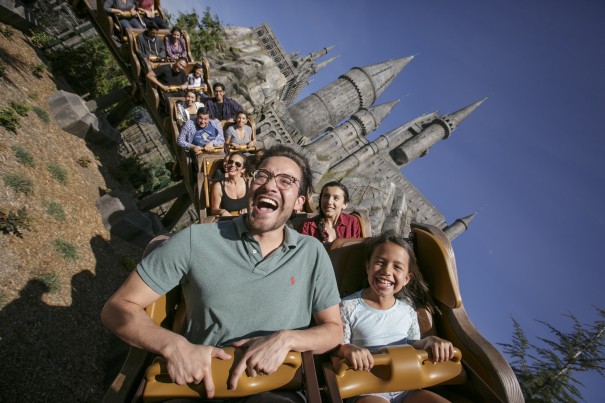 Flight of the Hippogriff: Perfect for Even Coaster Newbies
Kids who aren’t up for the Forbidden Journey will happily hop into this family-friendly ride. Located across from Hogwarts, this beginner coaster takes riders on a series of smooth turns (no big hills), zipping around at speeds up to 40 mph for a mere 40 seconds. While it’s meager thrill for coaster fanatics, newbies to the big kid rides will have a blast, and the Potter-ness of the experience entertains even those that love giant drops. While in line, keep an eye out for props and characters from the movies, including the moss-covered home of Hagrid, his flying motorcycle, and a giant animatronic hippogriff that nods to riders as they zoom out of the station. 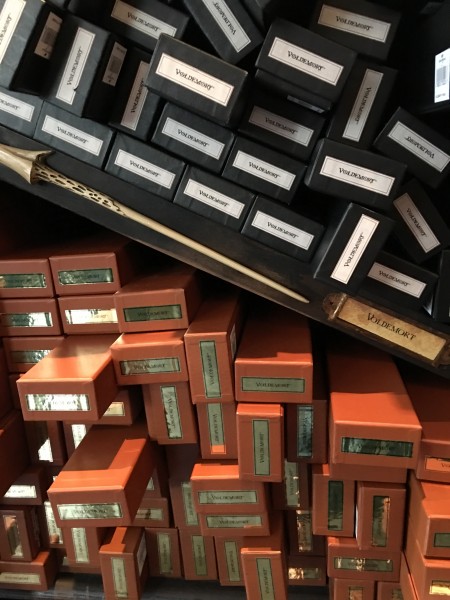 Fun-neus Maximus!
You simply can’t leave Hogmeades without stopping inside of the famous Ollivander’s Wand shop. Be sure to get there by way of the wand-fitting demonstration (there’s an added line for this, but it’s worth the wait). Here is where—inside of a dark and dusty-looking room — a persnickety old wizard will choose one lucky muggle to be “fitted” for a wand. Of course, once they’re fitted for said wand, they’ll be encouraged to conjure up the $20-50 needed to actually buy it. Presto! Your wallet is lighter. That’s magic.

Once inside the wand shop, you’ll be faced with a dazzling array of wand choices. Do you want Hermione’s wand with the dragon heartstring core? You got it. Seeking Lord Voldemort’s eerie, bone-headed weapon? Test it out!  Test them all; after all, it’s the wand that chooses the wizard. 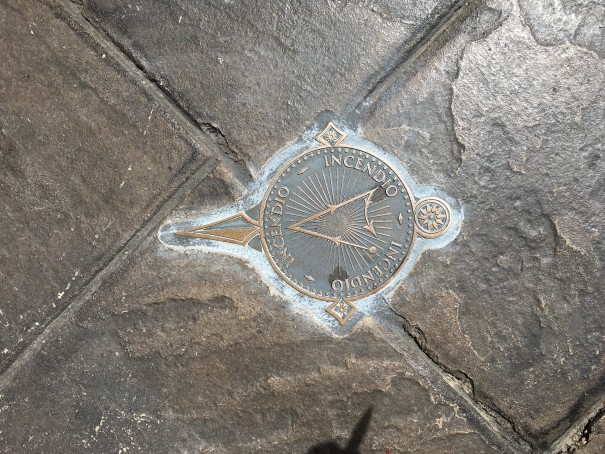 Probably the coolest wand sold at the store is any one of the 27 “interactive” wands. These wands are programmed to interact with specific areas throughout the land and come with a map to help budding wand masters find their way. Stand in the right spot (see above), give your want a swish and a flick; then, wait for it: You might see the lights of a storefront turn on or off.  Or maybe the cupcakes display in the sweet shop stop rotating. We won’t give away all the secrets, but it’s all pretty neat. Even for squibs, muggles and grown-ups.

Got a toddling wizard? Go for the “toy wands.” These aren’t interactive, but they have tips that light up and they’re priced reasonably at $21.95. 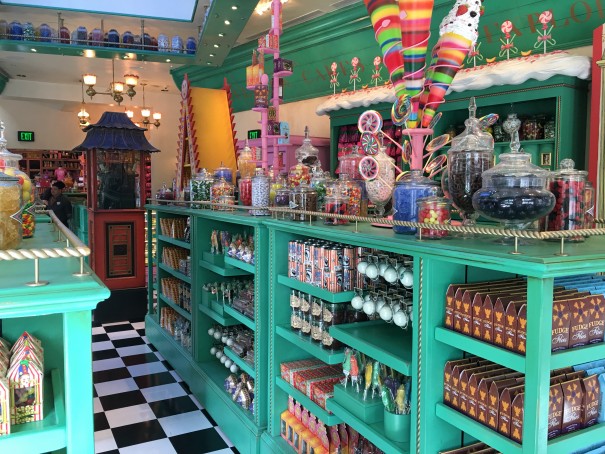 Shop ‘Til Your Galleons Are Gone
Of course, wands aren’t the only Potter-phernalia for sale. All of Hogsmeade is filled with opportunities to take home a piece of the magic. There are eight stores in all, but if you’re pressed for time (or money) we recommend you don’t miss these spots:

Honeydukes: Will it be the fudge flies or the chocolate frogs? The Every Flavour Beans or the Exploding Bon Bons? If your kids have any say in the matter, you’ll leave here with enough candy to feed all of Gryffindor. And by the way, the vomit-flavored beans really do taste like vomit—but your kids will love them.

Dervish and Banges: Here is where you can purchase your very own Monster Book of Monsters. Be careful — it’s alive! The furry fanged book snaps at you when you try to touch it and calms down when you stroke its spine. Another, more vicious and snarling, Monster Book sits in a cage at the front of the store.

The Owl Post: Want to send a letter (old-style!) to your friends back home? Here you can buy and send Hogwarts stationary as well as “Howler” letters which have recordable chips so that you can scream remotely at whomever opens your note. What’s even cooler? Send your mail from here and it will arrive at its destination postmarked from Hogsmeade. 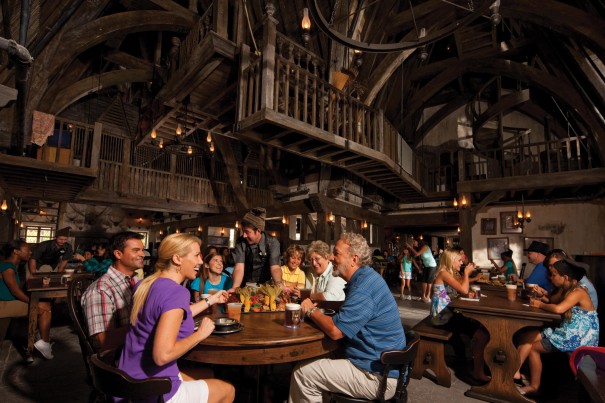 Magical Eats
The 6-acre Wizarding World has one restaurant, one snack cart, and two freestanding Butterbeer carts. If you’re hungry for a hearty meal, step inside the rustic-looking Three Broomsticks Pub. Dine on fish ‘n chips, macaroni and cheese, spare ribs, turkey legs and bangers and mash. While you’re there, be sure to look around for magical touches. You’ll notice, for instance, that the hog head on the wall above the bar actually breathes and moves.

If you’ve got special dietary needs—or constantly-snacking kiddos—you can bring your own food. Check here for specific restrictions. Formula and other baby food is always allowed.

Expect Monster Crowds
If Universal Orlando’s attendance is any indication, visitors can expect uber-long lines for at least a year (when Wizarding World opened at Universal Orlando in 2010, lines reportedly stretched for hours and attendance for the park jumped 30 percent). Our recommendation is to go on a weekday in May or early June before school is out. Or wait until September when school is back in session and the crowds die down. If you gotta go NOW, consider splurging for Front of the Line passes, which begin at $179 and let you literally cut in line one time for every attraction. Think you’re as important as the Minister of Magic? Get the VIP Experience, which starts at $299 and offers unlimited rides, a private tour guide, and access to areas off-limits to most visitors. 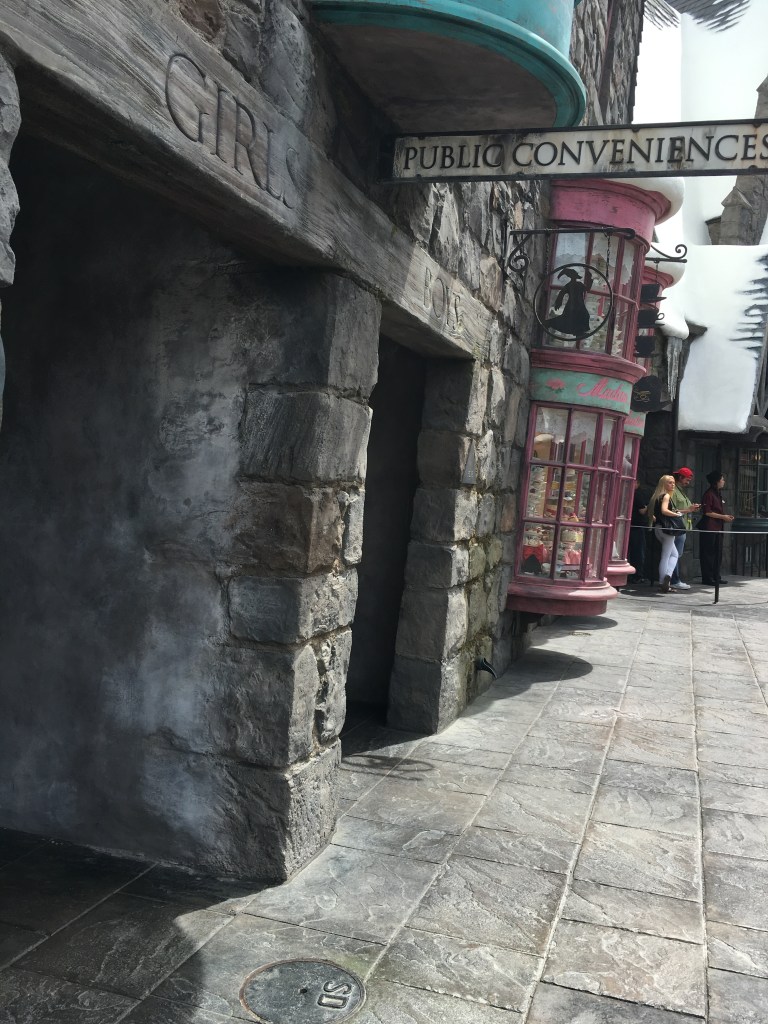 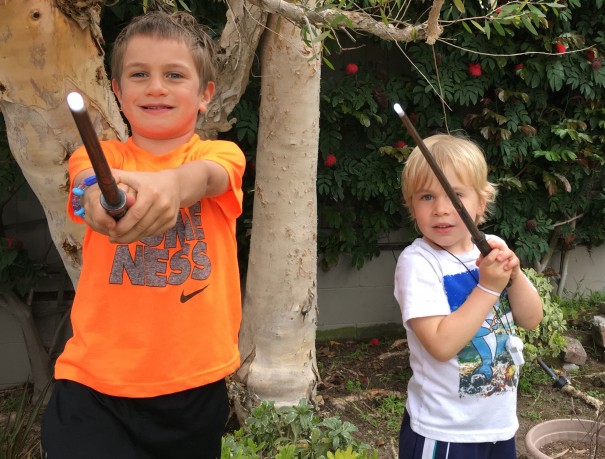 Other Boring (But Necessary) Stuff 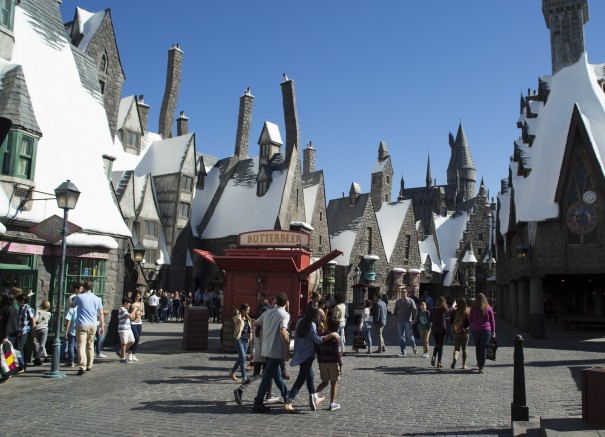 Have we covered everything eager parents and kids need to know?  If you have other questions, or tips from your own visit, please let us know in the comment section. 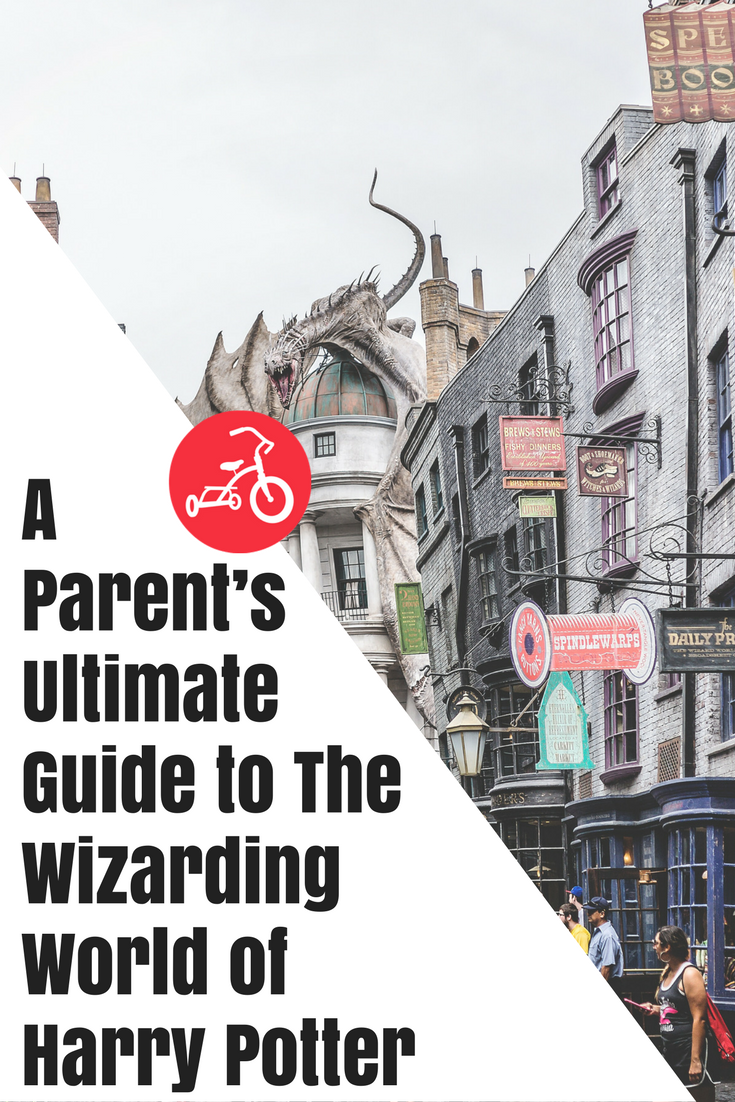