Portland is known for being “weird,” but let’s be honest…the whole great state of Oregon has some interesting oddities about it. With COVID-19 restrictions limiting travel and outdoor options, families are looking for innovative ways to kick cabin fever. Fortunately, road trip season upon us so why not hop in the car for a treasure hunt-like adventure? These neat road-side attractions will clear away COVID duldrums and give your kids unique quests to look forward to. Scroll down to find out where you can witness these strange attractions. 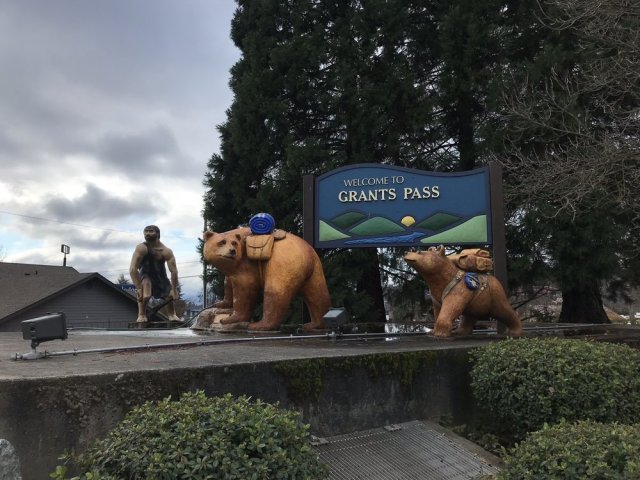 Since 1971, a 17-ft. caveman statue has been guarding the entrance to Grant’s Pass. The Neanderthal was constructed by International Fiberglass to celebrate both the Oregon Caves National Monument and a unique local men's group called the Oregon Cavemen. Members of this club, which officially formed in 1922, would ceremoniously march down Main Street sporting wigs, fake teeth, animal furs, and spiked clubs--all in the name of promoting the nearby caverns. While this wild procession is long gone, kids can still get a kick out of the giant statue and its lingering influence. (The local high school football team? The Cavemen, of course.) 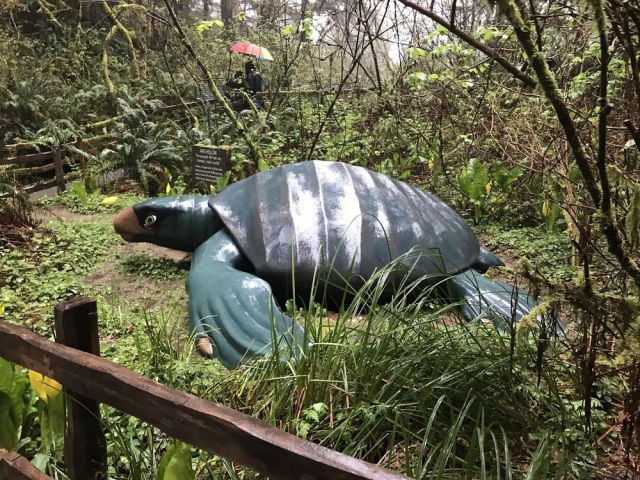 Prehistoric Gardens opened in 1955 and was created by E.V. “Ernie” Nelson, an artist, sculptor, entrepreneur, and dinosaur fan. He put in three years of research (including a trip to NYC’s Smithsonian) before making each of the 23 life-size creatures—including the 86 feet long and 46 feet tall Brachiosaurs. The park is located in the middle of the Oregon rainforest and while it may not have the flash of the blockbuster Jurassic Park, it does have a nice stroller-accessible path and a lot of dino-charm. Admission varies but tykes 2 & under are free. 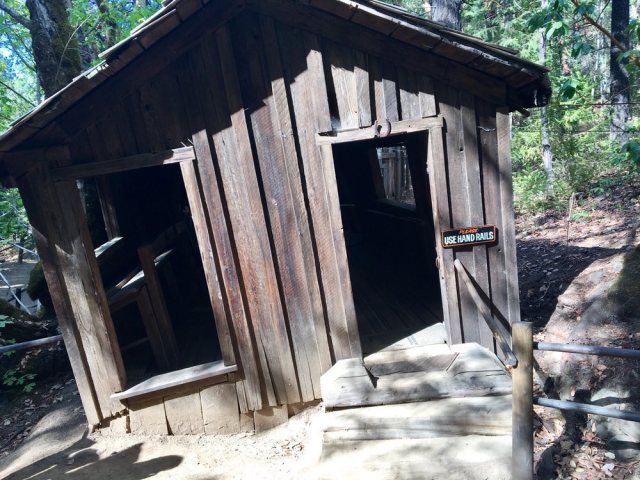 Oregon Vortex and House of Mystery

Open from March-October, the Oregon Vortex is a spherical field of force (half above the ground and half below) that causes a lot of wackiness: balls roll uphill, brooms stand on end, and people appear to shrink. Located on the same property, The House of Mystery was built in 1904, slid off its foundation at an angle in 1911, and has been at a tilt ever since. Thanks to the late John Lister, a geologist, mining engineer and physicist, both sites are open to the public. Skeptics are welcome but prepare for a lot of kid curiosity! 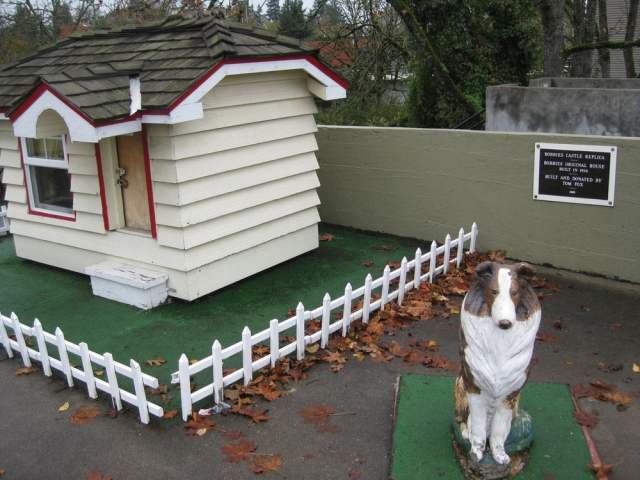 Dogs have always been a favorite family pet. In 1923 when the Braizer family lost Bobbie the family collie during a cross-country summer road trip they were Broken-hearted. The family headed home to Silverton, OR certain they would never see him again. Six months later, on February 15, 1924, a tired and bedraggled Bobbie arrived on their doorstep. He traveled 2,551 miles on foot, across mountains and rivers to return to his clan and instantly became a celebrity. He even received the keys to the city, a jewel studded collar, and a feature in Ripley’s Believe It or Not. His statue, replica dog house and 70-ft. mural can be found in downtown Silverton. 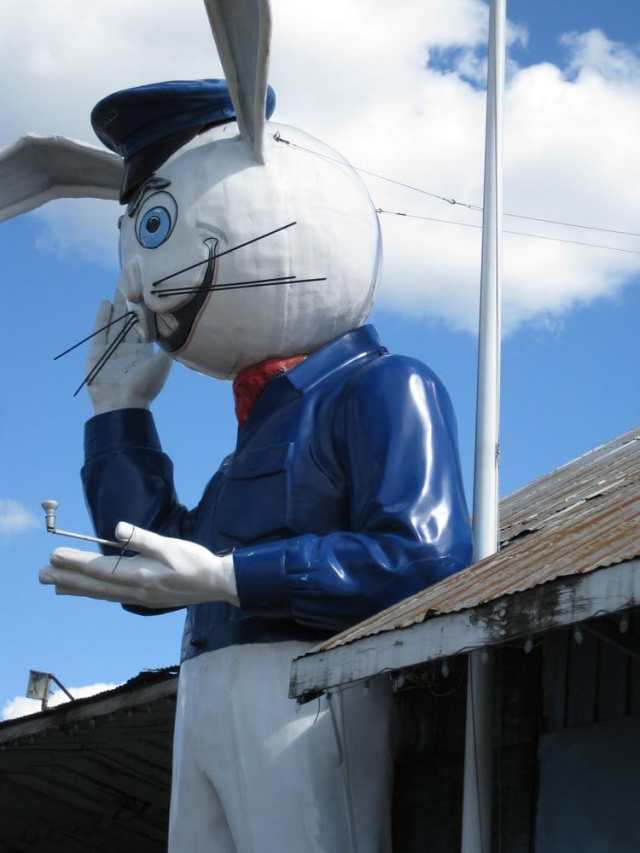 In October of 1962 a storm blew through the Pacific Northwest and toppled and damaged a fiberglass Texaco Big Friend statue in Aloha. The owner brought it to a man named Ed Harvey who was skilled at fiberglass repair. The owner never returned for it and after years of laying abandoned Harvey had an idea. One of his favorite Jimmy Stewart films had a giant invisible rabbit named Harvey in it and rabbits bring good luck, so he decided to put a rabbit head on Big Friend's body and installed it in front of his shop. It's been drawing attention ever since! 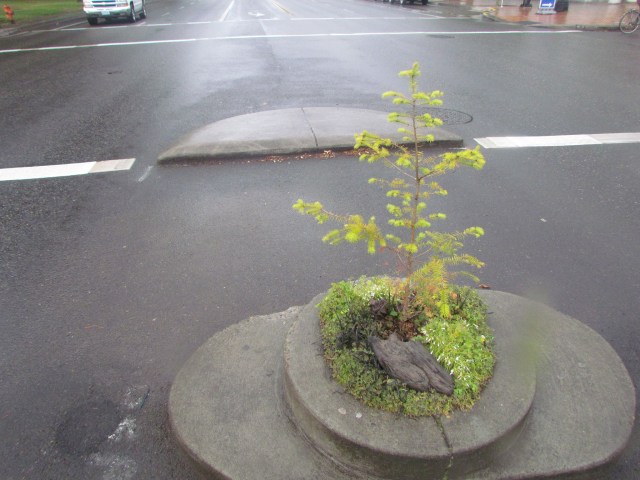 This tiny park was created in 1946 by WWII vet Dick Fagan. The weed-riddled hole in the ground was  initially intended  it to hold a light pole, but when the pole never showed up Fagan, who was a columnist for the Oregon Journal, planted flowers it and named it Mills Ends: the name of his column in the paper. It is located in the median strip of SW Naito Parkway and is two feet wide and takes up 452 square inches. In 1971 the Guiness Book of Records granted it the grand status of "the smallest park in the world." In 1948 Mill Ends Park was dedicated as a park for leprechauns on St. Patrick’s Day. Fagan wrote stories about the events that supposedly took take place at the park until his death in 1969. 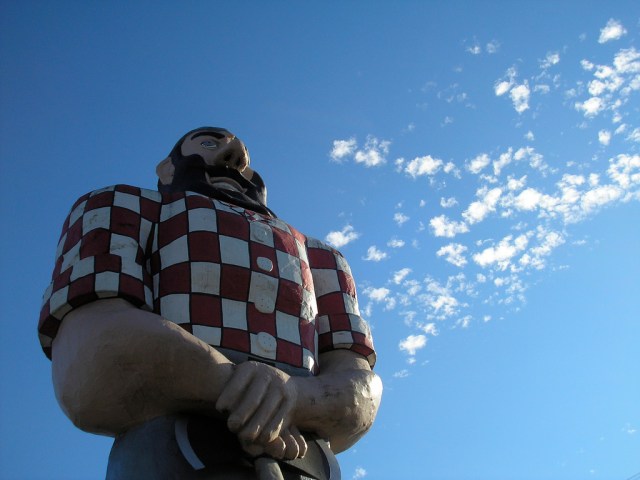 This 31-foot tall man is made of concrete, plaster and steel and evokes squeals of excitement from tiny tots who need to crane their necks to take the whole wonder in. The statue is listed on the national Register of Historic Places and is a fine tribute to the storybook logger, Paul Bunyan. Built by father and sun team Victor R. and Victor A. Nelson in in 1959 for Oregon's Centennial Exposition and International Trade Fair, this creation is almost as infamous to locals as the legend it represents. While some may wonder how the story of Paul Bunyan, which originated in Minnesota, fits into the story of Oregon, locals agree that the monstrous lumberjack was a clear tip-of-the-hat to the timber industry and it's influence in Oregon.