Looking for a new adventure? Westmoreland Park Nature Play Area may just be what the sherpa ordered. Scale massive logs, cross wooden bridges and scramble over real boulders at this newer play space that opened at the end of last year in the Sellwood-Moreland neighborhood, inviting kids to make up their own games and races using things found in nature. Here are six reasons why your family should go check it out now.

1. You won’t find any monkey bars.
Yep, you read that right. This is Stumptown’s first permanent nature-based play area. (Excuse us while we wipe away a few tears of pride.) Instead of typical twisty slides and tire swings, your little ones can climb on boulders, traverse logs, dig in sand and use cut pine branches to make forts and caves. (Okay, there is one slide, but it’s pretty simple.) It’s all part of the Portland Parks and Recreation’s Nature Play Initiative, encouraging imaginative kids’ play, based on interactions with natural objects.

2. You won’t miss the traditional playground experience. And trust us, neither will your kids.
Here’s the deal. Kids like to play. And they don’t need to be told how to do it. Go to any park with a jungle gym and we guarantee you’ll still see kids engineering some wacky game you’ve never heard of before. (“Lava Monster,” anyone?) Westmoreland’s Park makes kids’ imagination — not a fancypants slide — the main focus. Its unofficial motto is, “Here’s nature. Go wild.”

3. You won’t see any parents on smartphones.
On two recent trips, we saw dozens of parents — and zero phone usage. The reason? Nearly every parent was playing with their little ones, be it chasing after them, helping them dig a moat in the sand, or dragging logs to help construct a fort. Ironically, the fort was to keep parents out. This park doesn’t just entice kids to play, but parents, too. 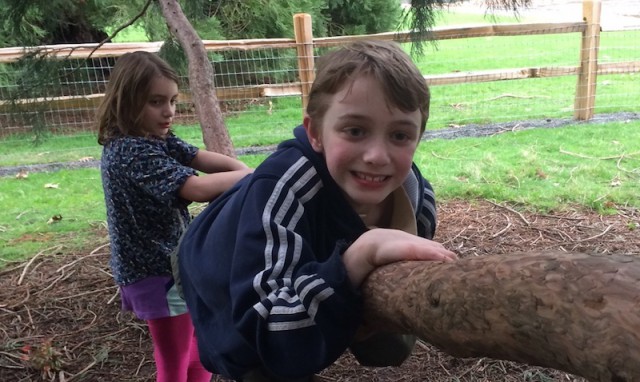 4. “Playing” has never been so important.
Think of this as the “Waldorf School” of parks. Kids are learning a love of nature, feeding their imaginations, solving problems, assessing risks, and best of all, figuring out how to entertain themselves. And (gasp!) all without a screen.

5.  You should bring a picnic — and your own water.
File this park away for a perfect picnic destination, thanks to plenty of tables and a shady grove of giant sequoia trees. Carry in your own water, though; at least for now. They’re shut down for the winter, like all of the other parks. They’ll be back on somewhere around mid-to-late March. True, the dull roar of traffic from nearby 99 can be a tad distracting, but at least fresh scent of pine and mulch overpower any exhaust.

6. No dogs in the play area.
Dogs like to, sniff, dig and (ahem) mark their territory, so they’re not allowed in the new play area. We get it. They can, however, be walked on the little bridges and trails just outside the fenced-in nature play area. And if your furry family member needs to sit and stay for a while, at least there are plenty of ducks in the restored Crystal Springs Creek to keep him entertained.

Have you visited this park yet?  Let us know in the Comments below!