What? You didn’t know that National Lighthouse day is August 7th? Well, break out those iPhones and update your calendars, because summer’s hottest holiday is right around the corner. Well… OK, so maybe it’s not the most-anticipated day of the year, but as residents of the Puget Sound, we do have lighthouses aplenty, and whether they’re still hard at work or just for show, lighthouses hold a certain mystery to visitors young and old. Our lighthouses are some of the state’s oldest buildings, and many have surprising histories that will add a little extra spark to the beach-combing trip that’s already on the books. Check out our list of the top five lighthouses within a stone’s throw of Seattle (and the fun facts we’ve gathered for you to use as bait to get your kiddos in the car), as well as a three “best of” favorites that are farther afield. 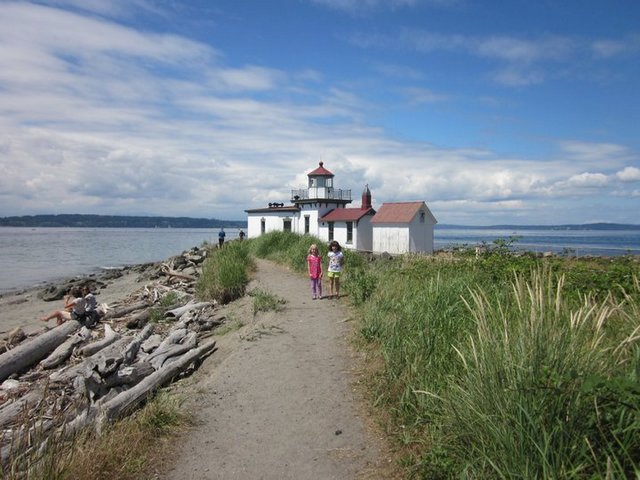 Admiralty Head Lighthouse at Fort Casey
Along the majestic western coast of Whidbey Island, you’ll find Fort Casey and the equally majestic Admiralty Head Lighthouse. (This is a super easy side-trip if you’re ever taking the Port Townsend – Keystone Ferry). Although a bit of a tongue-twister to say, Admiralty Head is lighthouse that is well worth the visit. Set on miles of rocky beaches, you’ll get amazing views of the Puget Sound, and there isn’t a better place to fly a kite. If you have little ones who like to play pirate or who fancy themselves history buffs, they’ll love checking out the maps in the museum (inside the lighthouse) that show how Fort Casey, along with Fort Flagler and Fort Warden (which also has a lighthouse) on the Peninsula, make up the “triangle of fire.” The three forts were placed in such a way that no “bad guys” could ever get through to our weapons and ships housed in Bremerton, Tacoma and Seattle harbors. Four historic guns/canons are on display, as well as the original (and super fancy) Fresnel lens for the Alki Lighthouse. 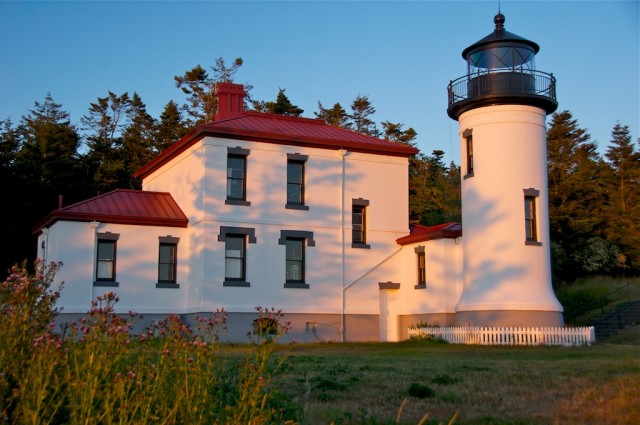 Bonus Fun Fact for Kids: Starting in 1866, a seventeen year old girl named Flora Pearson served as Assistant Lighthouse Keeper at Admiralty. She stayed on for more than ten years, being one of the first and only young women to serve in such a post.

Mukilteo Lighthouse
One of the most charming and well-kept lighthouses in Washington is the Mukilteo Light Station right in downtown Mukilteo. Brimming with old-time romance, this working lighthouse offers visitors the opportunity to climb to the top of the tower and look out to sea, just like lighthouse keepers one hundred years ago. The Mukilteo Historical Society has also put together an informative exhibit about the days of yore, including pictures from the olden days and the lighthouse keeper’s uniform. Insider Tip: For a fun-loving, pirate-filled, lighthouse adventure, complete with hot dog eating contest, musical “petting zoo” and fireworks, hit the free Mukilteo Lighthouse Festival, September 6-8. 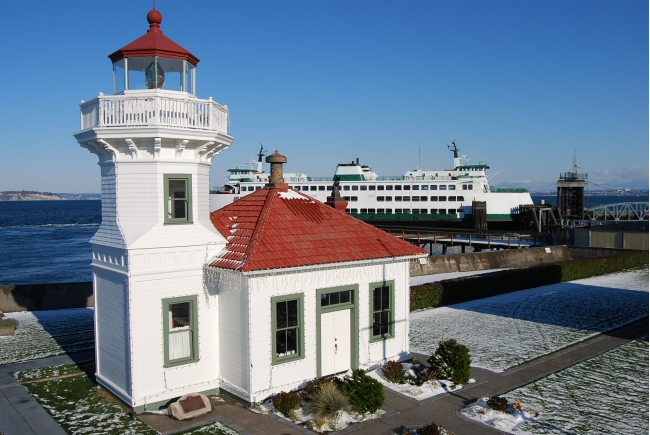 Fun Fact for Kids: Mukilteo is a local Indian word for “good place for camping.”

Bonus Fun Fact for Kids: Mukilteo’s light can be seen more than 12 nautical miles out at see and flashes once every five seconds, day and night, all year long.

Alki Lighthouse
If you’re a long-time Seattle-ite perhaps you already know the special place that Alki has played in our history. If not, or if you’ve got kiddos studying Washington State history or who want to know just how our Seattle forefathers and mothers got here, take a quick trip to West Seattle and the tip of Alki Beach where you’ll find the Alki Lighthouse. Originally inhabited by the Duwamish Indians, this little point of land marks the spot where, in 1851, the first settlers landed and formed a colony, which later led to the development of Seattle. The Alki Lighthouse is celebrating its 100th birthday this year and is a great spot for a picnic and to view the Seattle skyline. For more fun Seattle history nearby, check out the Log House Museum just a block off the beach. 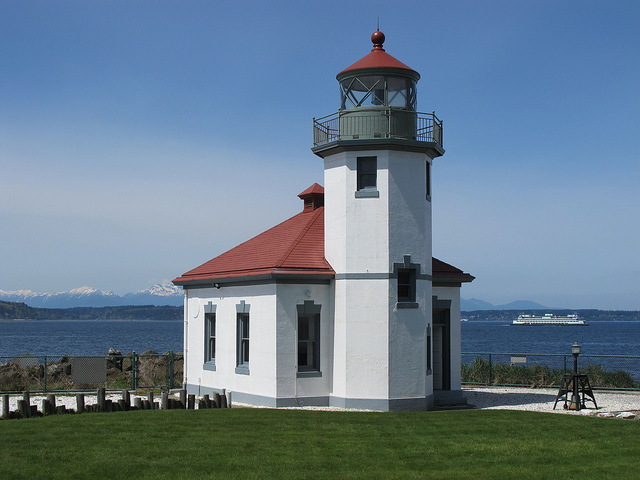 Fun Fact for Kids: Alki is the Washington State motto; it means “by and by.” Alki was first named New York, but when it had a much slower start than its boom town namesake back east, colonists changed it to New York-Alki (New York, By and By), and eventually they just dropped the “New York” altogether.

West Point Lighthouse (in Discovery Park)
Discovery Park is one of the all time favorite park destinations in Seattle. It’s got a little bit of everything: lovely trails through the forest, nice paved paths for walks with strollers or bikes, wide open meadows for picnicking, amazing vistas of the Olympics from the bluffs of Magnolia… and a driftwood strewn beach with a working lighthouse! It’s an easy park to love and the perfect place to start your love-affair with lighthouses. Insider Tip: Pack the Ergo! The walk down to the beach is beautiful, but super steep and not stroller friendly (lots of stairs). If you have very small children unable to make the hike or a disabled parking pass, you can nab one of the few parking spots down right by the beach. 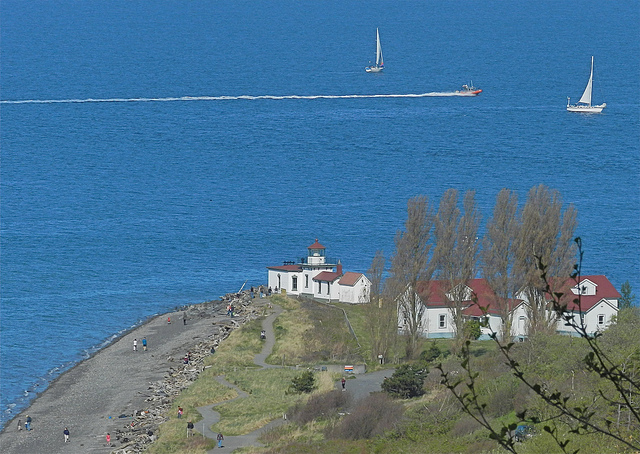 (Gross but) Fun Fact for Kids: The beach at the lighthouse wasn’t always so pretty. Or at least it didn’t always smell so pretty. For its first 80 years (until the 1960’s when the sewage plant was built), the lighthouse sat directly next to the spot where Seattle would dump its raw sewage. One lighthouse keeper in the 1920’s wrote that there was often 4-6 inches of poo on the shores at low tide. Peeee-yew!!

(Weird but) Bonus Fun Fact for Kids: If you think your parents are strict about telephone manners, dig this: one of the kooky lighthouse keepers was so in love with the West Point Lighthouse and fog horn that he trained himself to mimic the fog horn’s cadence while he was on the phone: he’d speak for 27 seconds and then have three seconds of silence. Weird but true! 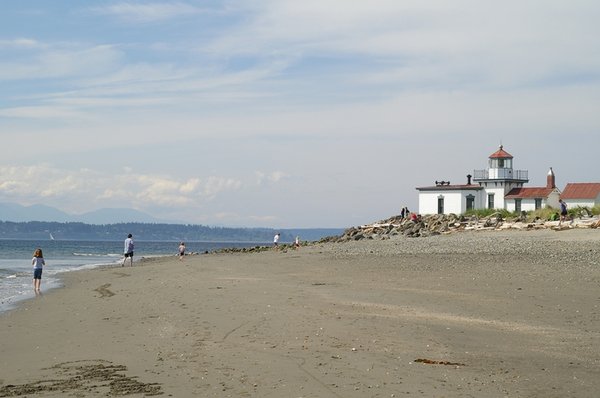 Point Robinson Lighthouse
A lighthouse on a lonely island is the perfect setting for a kid to get into some mischief. In the humorous Christmas tale, The Red Ranger Came Calling, the author Berkeley Breathed uses the Point Robinson Lighthouse on Vashon Island as its muse. In addition to its literary glory, this dainty lighthouse halfway between Seattle and Tacoma, boasts stunning views of Mount Rainier and the Sound. And if you just can’t get enough beach time and want to experience lighthouse living 24-7, you can rent the Keeper’s Quarters ($225/night, 3 bedrooms) and watch the ships pass in the night from the comfort of your very own little front porch. Insider Tip: Park in the lower parking lot if you have toddlers or family members with special needs. The hike down from the upper lot isn’t long, but it is steep! 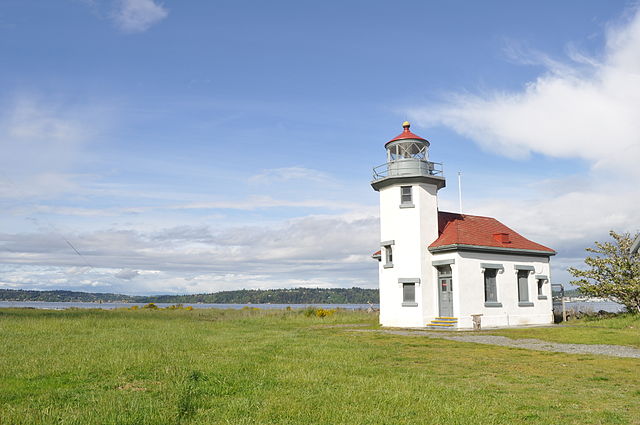 Fun Fact for Kids: There’s a rather special bicycle that makes an appearance in the Red Ranger book, and you can see the real one when you visit the lighthouse. It’s in the woods just behind the local Sound Food Café.

And a few more highlights not to miss…

Best Lighthouse for an Overnight: Point No Point Lighthouse
North of Kingston on the Olympic Peninsula, this uber-picturesque spot is a lighthouse lovers’ dream come true. Sandy beaches, madrona-treed bluffs, and quiet starry nights: a true escape for the family, where you will put away the iPads and play some good old-fashioned Parcheesi. 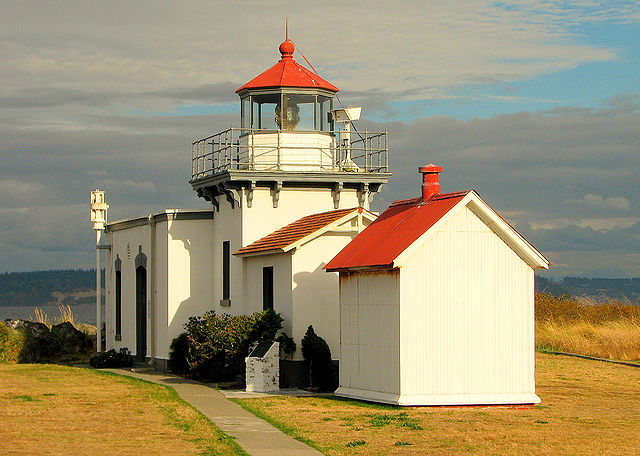 Runners up: Browns Point Lighthouse in Dash Point, and Cape Disappointment (which will not disappoint) on the south of the Long Beach Peninsula.

Best Lighthouse for Whale Watching: Lime Kiln Lighthouse
Lime Kiln Point State Park on San Juan Island is known to be one of the premier spots worldwide to watch whales from dry land. May through September are peak whale sighting times, with June and July being the absolute best times to go. 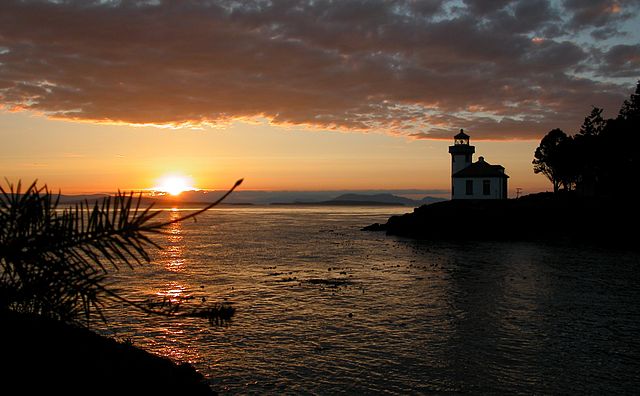 Best Hike to a Lighthouse: New Dungeness Lighthouse
This little lighthouse near Sequim is at the very, very tip of one of the world’s longest natural sand spits, and it has quite a history. It’s been burning bright for more than 150 years and seen battles, forest fires and shipwrecks in that time. The hike to the lighthouse is 5 miles each way, along a drift-wood strewn sandy wildlife refuge home to hundreds of different types of birds. As you walk, you might catch a glimpse of an eagle soaring or a sea lion rolling in the surf. Even if you never make it to the lighthouse (plan at least 5 hours for the entire round trip), this beach has the best fort-building supplies your kids have ever seen! And if you’re feeling really adventurous, take the family here for spring break to serve as volunteer lighthouse keepers; one of the only light stations where this is possible. 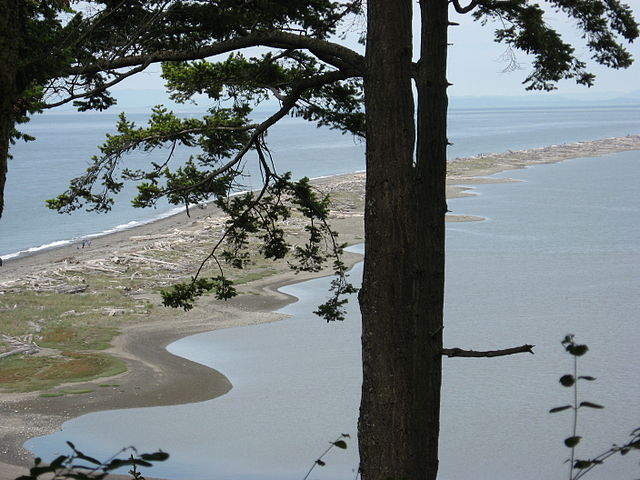 Got a favorite lighthouse or lighthouse story? Do tell! Leave us a comment below.