When was the last time you and the kids played tourist in the Emerald City? If it’s been a while, now is a great time to reintroduce your family to the Seattle Waterfront. With the removal of the old viaduct and the promise of a new city park, the waterfront is looking better than ever. On a sunny day, you can’t beat it. And if we’re being honest, it’s just as fun (and maybe less crowded) on a rainy day. From the Great Wheel to Ye Olde Curiosity Shop, there’s a treasure trove of things to do for families of all ages. Just mix and match any of our favorite spots to plan the ultimate Seattle Waterfront outing. 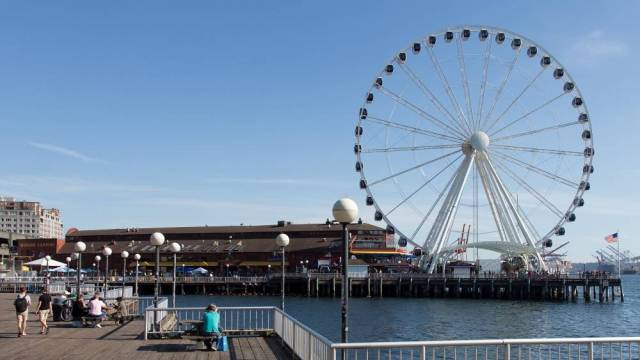 What to Do on Land

For our guide, we found places that are within walking distance of each other along the Seattle Waterfront, but parents with toddlers know that’s not always a standard measure. Don’t sweat it; you don’t have to do it all in one trip. Pick one or two attractions that fit your family and you’ll have a great time without feeling pressured to “do it all.” 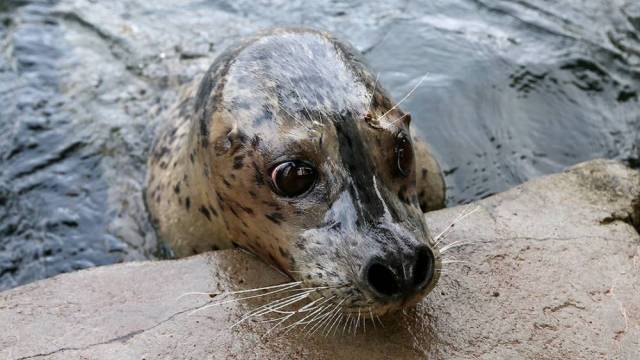 Swim with the Fishes
The Seattle Aquarium is home to all kinds of colorful tropical fish, shorebirds, jellyfish, otters and a giant Pacific Octopus that kids can’t seem to resist. Its newest residents include Casey, a harbor seal who is friends with two others, Barney and Hogan; and Chiidax, a male northern fur seal and is friends with Flaherty. (We are not making this up.) The most impressive exhibit here is the Underwater Dome, where you’re surrounded by all kinds of sea life. Other exhibits include the Family Activity Center and the ever-popular tide pool where kids are encouraged to reach in and touch sea urchins, anemones and other underwater wonders. 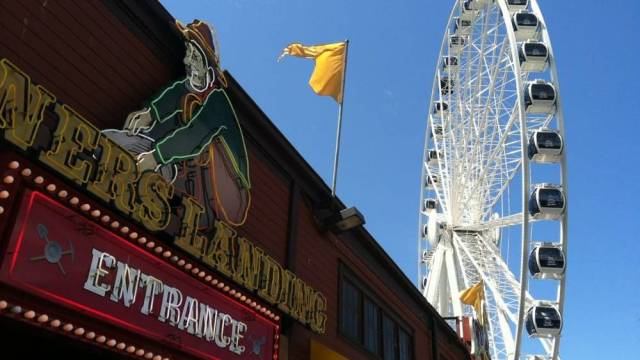 Become a Miner for the Day
Pier 57 is home to Miner’s Landing, a mini Disneyland, if you will. This is the home of the Seattle Great Wheel, Wings Over Washington, an indoor carousel featuring 30 hand-painted horses, shops and restaurants.

Take a Spin Over the City
Standing at 175 feet tall and reaching 40 feet over Elliott Bay, the Seattle Great Wheel is the largest Ferris wheel on the west coast. Each of the 42 climate-controlled gondolas can carry up to eight people, making for a perfect ride whether rain or shine. While on the ride, you will see views of Century Link Field, Mt. Rainier, T-Mobile Park, Pike Place Market and the Space Needle. At it’s just as spectacular at night when it is covered with over 500,000 LED lights making for a free walk by light show. 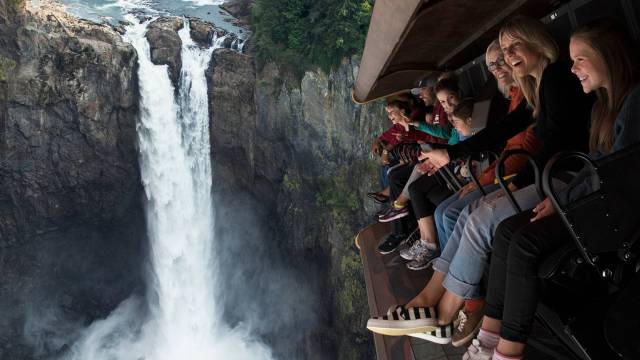 Take an Indoor Flight
Patterned after Disney’s Epcot’s “Soar’n” attraction, the Wings Over Washington “flying theater” will transport your whole family to locations all over the state. Your journey begins in a “ranger station” where you’ll get a short briefing on what to expect. From there, you’ll exit into a “forest” and climb into your theater seat, and you’ll be on your way experiencing the sights, sounds and even smells of the PNW as you “fly” over the Olympic National Forest, Mt. Rainier, San Juan Islands, the Tieton River, Husky Stadium and even become part of the Walla Walla Valley Balloon Stampede.

Become Curious
Located on Pier 54, the Ye Olde Curiosity Shop is a hybrid museum and gift shop that has been entertaining families since 1899. It prides itself of being home to the “weird, freaky and curious.” Among the tourist t-shirts and coffee mugs, you’ll find displays of shrunken heads, mummies, natural oddities, “taxidermy treasures” and an assortment of human-made wonders. You’ll see jewelry made from real insects, hand-blown ornaments, Northwest Native American hand-carved totem poles and a lot more. 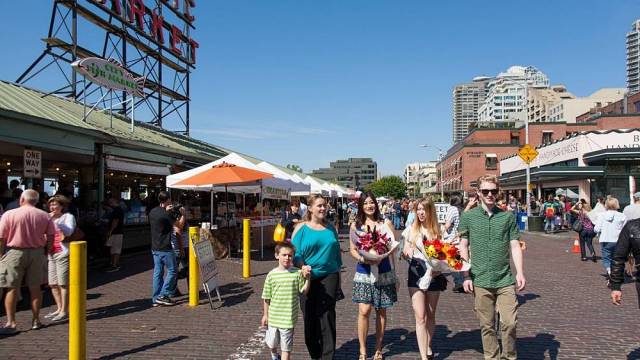 Go to the Market
While not technically one of the Seattle Waterfront attractions, it’s hard to resist a trip to the Pike Place Market when you’re so close. A family could almost spend a whole day just at the Market! Hint: it’s also a great place to park. The market is filled with 500 or so small businesses, so there is a lot of ground to cover. The best places to take the fam? Watch the fish fly by at the fish stands, check out the comics at Golden Age Collectables, take a (quick) stroll through the Old Fashioned Candy Store, say hi to Billie the brass pig and be fascinated with the iconic gum wall. If you’re good, the kids might even let you stop at the original Starbucks. 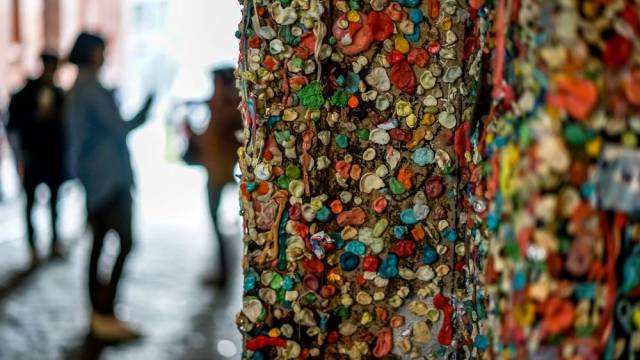 Where to Go on the Sea

The water is pretty to look at, but it’s even better to experience. Hop aboard one of these ships for incredible views and memory-making.

Argosy Cruises
Argosy Cruises have been doing their thing for 70 years. Known as “Seattle’s Original Harbor Cruise,” Argosy offers one-hour long narrated cruises. “From the skyline to the shipping port, there’s views and history everyone will enjoy,” they say. Each cruise offers a live narration about Seattle’s present and mini history lessons about its past while taking in the panoramic views of the Olympic Mountains and Puget Sound. A full-service bar is on board with cocktails, wine, beer, non-alcoholic beverages and snacks.

Seattle’s Tall Ship
For a change of pace, check out Seattle’s Tall Ship, a classic schooner departing from Pier 66 Bell Harbor Marina. The 85-foot traditional gaff-rigged schooner is a family-friendly ship. Yes, the twin-masted ship offers a similar tour with fantastic views, but this ride is wind-powered and is two hours long. It too offers and drink and snack bar and plenty of outdoor seating. 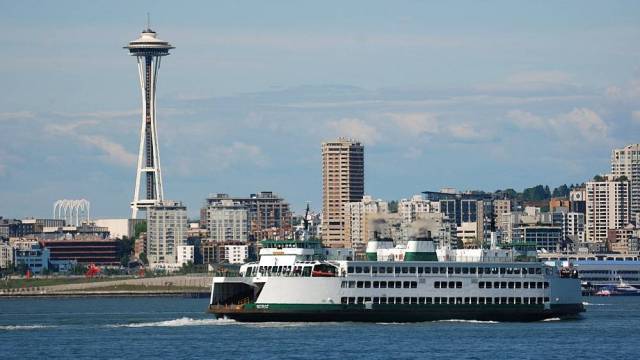 With all of that walking around and exploring, you’ll need some time to refuel. Along the waterfront, you’ll find a number of restaurants options that might fit the bill, but if you’re wanting to complete your day with an experience, check these out.

Ivar’s Acres of Clams
Ivar’s has been a Seattle institution since 1938. Ivar’s Acres of Clams is known for their “world famous” clam chowder, grilled wild salmon and true cod fish ‘n chips. The menu also includes deep-water halibut, Alaska King crab, Dungeness crab, jumbo prawns, Manila clams and weathervane scallops. The kids menu is pretty extensive with kid-sized portions of the classics plus butter noodles (with or without chicken), cheeseburgers, grilled cheese sandwich and more to chomp on. Got a picky eater? How about a fruit cup? Done!

Ivar’s Pier 54 Fish Bar
However, if the weather is cooperating, you might want to take the clan to Ivar’s Pier 54 Fish Bar right next door to the Acres of Clams. They serve up many favorites including cod, halibut and salmon fish ‘n chips, clams, prawns, oysters, scallops and even chicken. Enjoy white or red clam chowder or Alaska smoked salmon chowder in a cup or bread bowl or grab a side of French fries, cole slaw and shrimp cocktail and mix it up.

The Crab Pot
Here, you actually encouraged to play with your food. Sort of. The Crab Pot is a casual restaurant’s specialty is the Seafeast where buckets of steamed seafood is dumped directly on the table and your family can have at it. Four feasts are offered, but the most popular is The Alaskan which consists of king crab, snow crab, Dungeness crab, clams, shrimp, mussels, andouille sausage, red potatoes and corn on the cob. If that is not your thing, they also offer more traditional items including grilled seafood, barbecue ribs, chicken and vegetables, burgers and sandwiches. 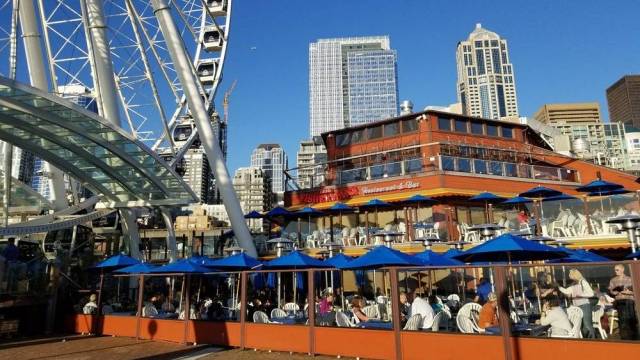 RELATED STORIES
Have You Visited These Hidden Gems?
10 Fun Facts about Seattle We Bet You Didn’t Know
8 Seattle Oddities You Gotta See to Believe
Your Ultimate Guide to Riding Seattle’s Great Wheel
Wings Over Washington: Seattle’s First (and Only) Flying Attraction