If you remember wearing stone wash jeans, a rainbow t-shirt and a scrunchie in your hair (unironically), these toys will fer sure flash you back to your Easy Baking – Fisher Price record spinning – JEM imitating – Weebil Wobbling – Strawberry Shortcake sniffing childhood. Or as we like to call it, the golden age of toys.

What was your favorite toy as a kid? Share it with us in the comments. If you need a trip down memory lane, check out some of our favorites…

Troll Dolls: So ugly they were cute. They topped our pencils, covered our lunchboxes and inspired the teasing of many a bang. Some things we miss. Not so much anything about these guys. 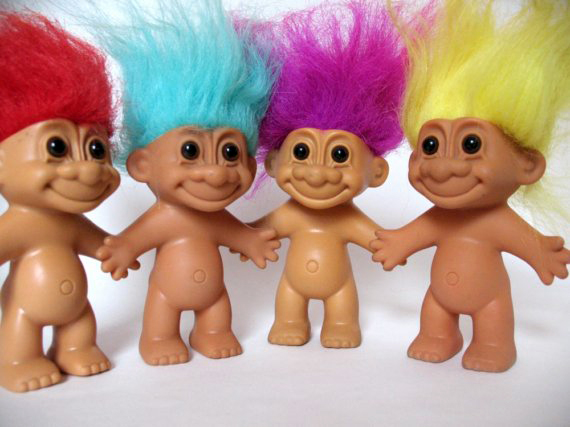 Lite-Brite: Making things with light… lightbulb not included.  Were you a “follow the dots” or a “create your own picture” kind of kid? 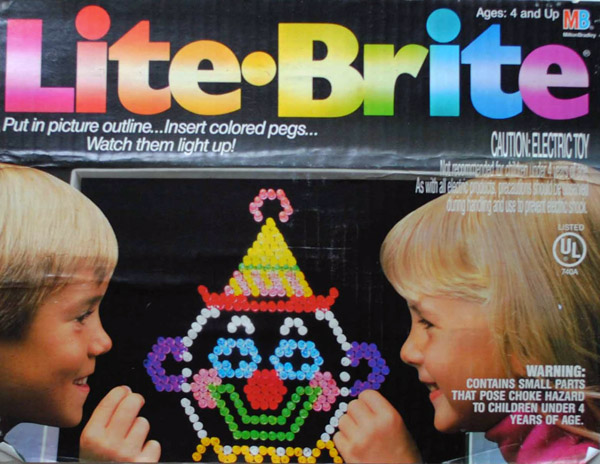 Pogo Balls: Oh yeah. Tuck those jeans into your double pair of crew socks, lace up the white Reebocks and bounce the afternoon away. 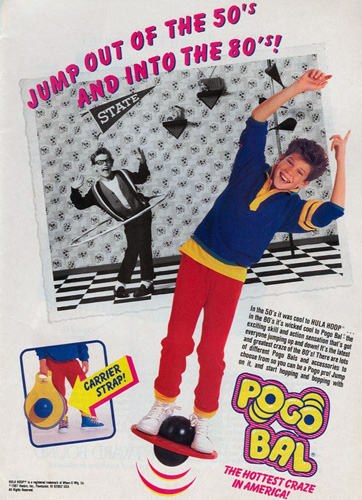 Waterfall Ring Toss : Like Pong, this simple game had the ability to mesmerize and keep us playing for hours. Behold, the power of water currents! 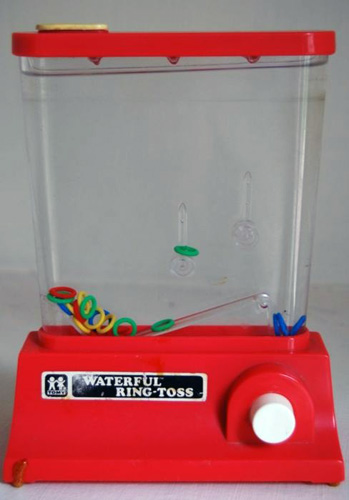 My Little Pony: How many horseshoe points did you have? 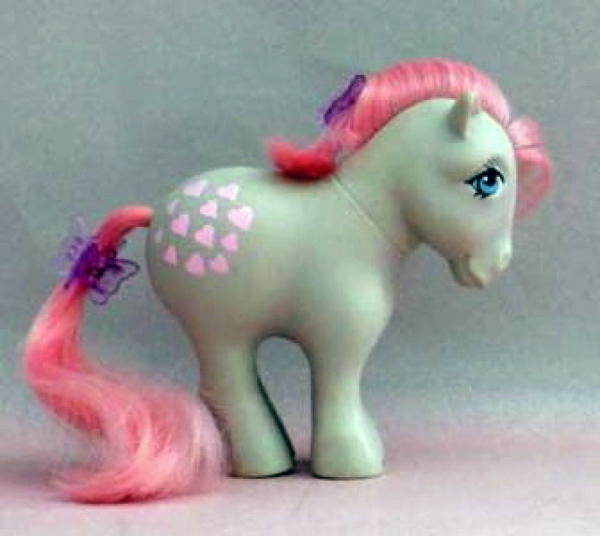 Star Wars:Before it was Episode 4, it was the one and only. Raise your hand if you were Princess Leia for Halloween (once in elementary school in the white robes, then again in college in the slave girl bikini). 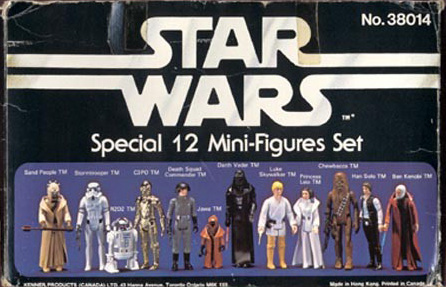 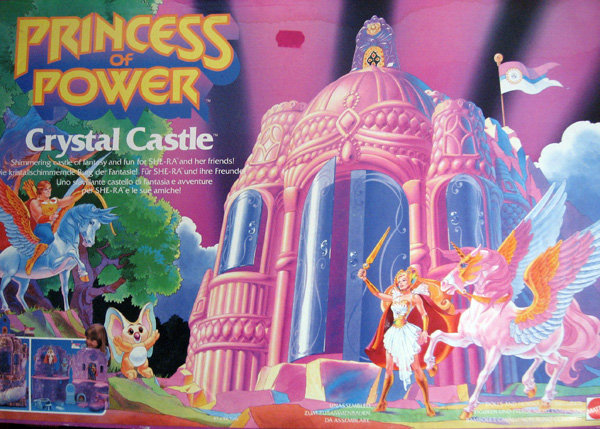 Looper Looms: The Rainbow Looms our kids have for making bracelets? Puh-leeze. In our day, we made real things, useful things, like potholders. 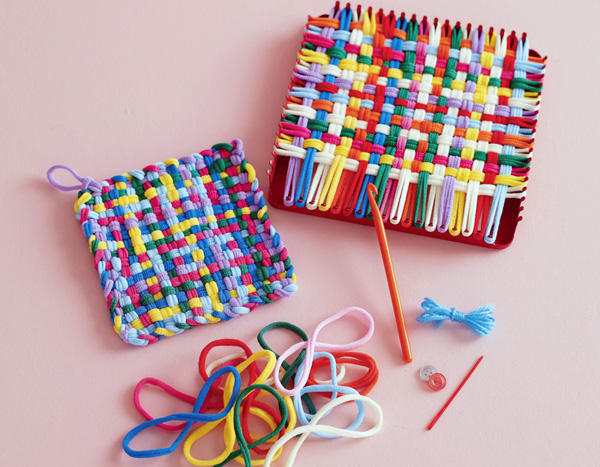 Latch Hook Rug Kits: Rainbow, unicorn, panda or smurf? What did you make? They were painstaking, but oh, the pride in finishing a rug. 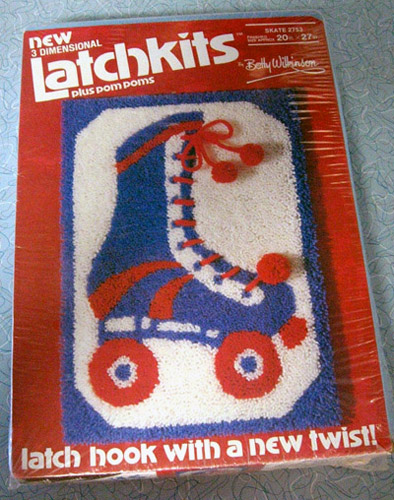 Cabbage Patch Kids: No American Girls full of historical accuracies for us. We had babies that grew in the garden. And no knock offs, please. Only authentic dolls with the Xaviar Roberts signature on the bum, that came with birth certificates and adoption papers. (Bonus points if you also collected Garbage Pail Kids cards.) 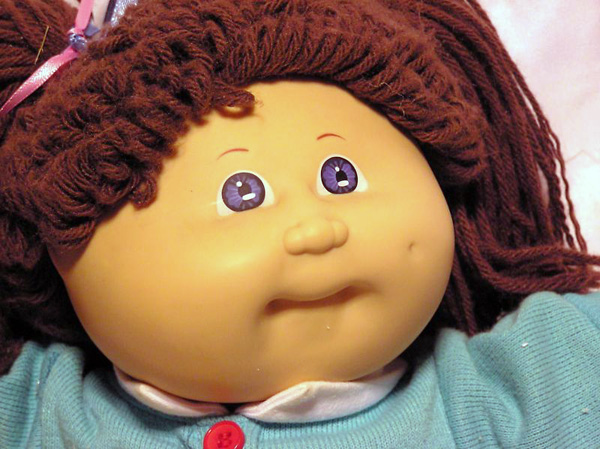 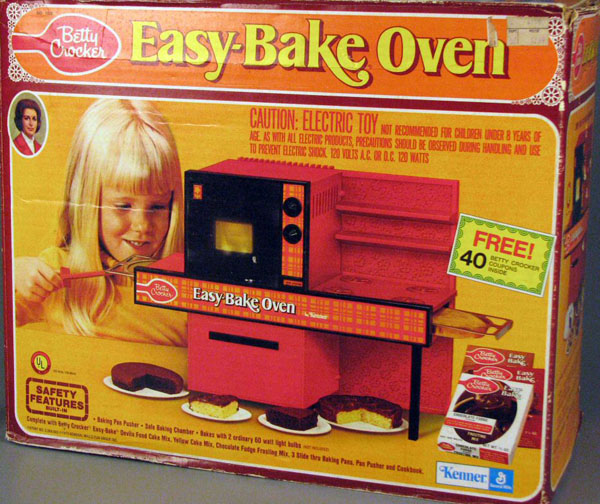 Hot Wheels Big Wheel: If someone didn’t terrorize your neighborhood with a Big Wheel (usually the punks had the CHIPS or Mr. T versions), you are not a child of the 80’s. 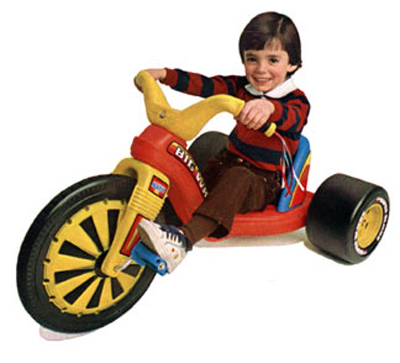 Play-Doh McDonald Happy Meal Playshop: It’s a toss up as to which was healthier – the Happy Meal you could make out of Play-Doh, or the one you’d order at the drive through. 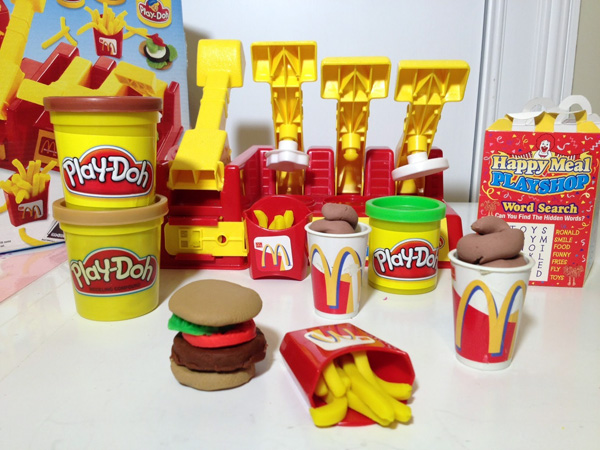 Rock’em Sock’em Robots: Parental permission to whale on your little brother, albeit via your own plastic robot. No wonder we loved them.

Fisher Price Chatter Telephone: Probably your first toy. Sadly, your kids don’t even know what it is. “Why can’t I play games on it, Mommy?” 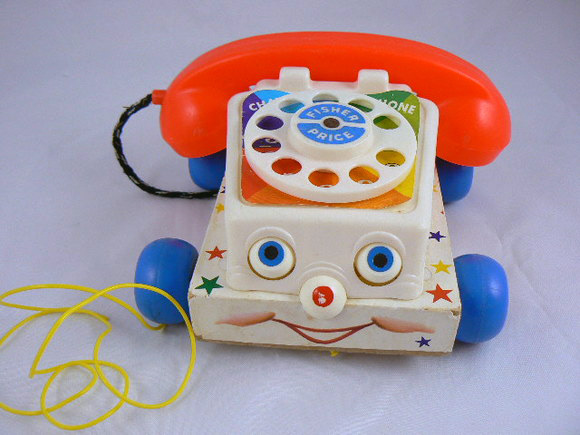 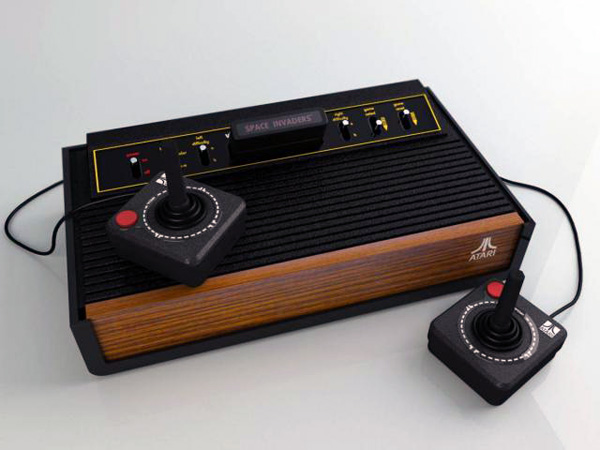 Shrinky Dinks: We were chemists! Polymers in action. Color, cut, heat, curl and shrink. Best part is that you could get sets relating to your favorite tv shows or characters. Because who didn’t want a plastic Alf?

Weeble Wobbles: They might wobble, but they never fell down. The coolest of the cool had the treehouse, which for the under 5 set was even better than a Barbie Dream House. 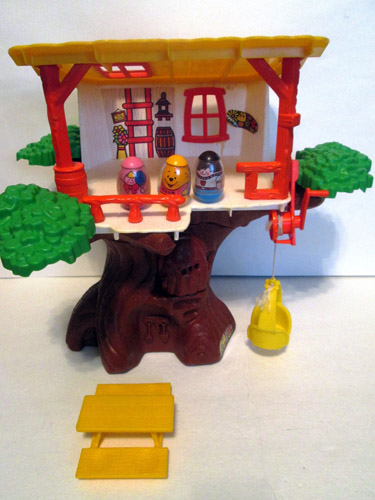 Fisher Price Record Player: Who needs an ipod when you can rock out to Twinkle, Twinkle? 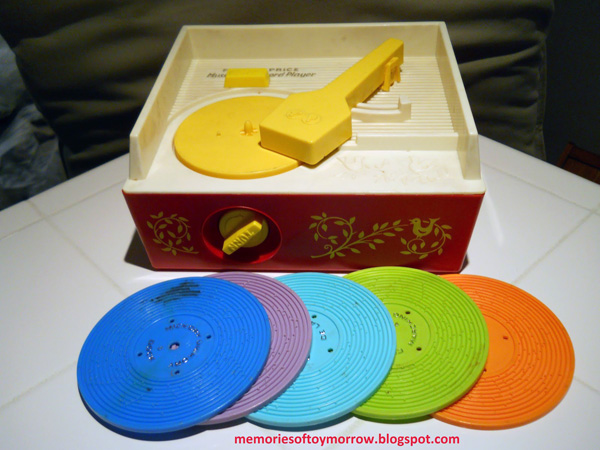 Strawberry Shortcake: Scented dolls = sheer genius! What was your favorite doll? Who had the best scent? We confess a lingering fondness for the Peculiar Purple Pieman. 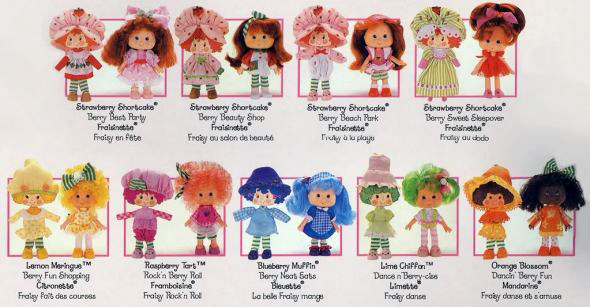 Sit ‘N Spin: Jury is still out (30 years later) on if it was more fun to spin yourself dizzy, or put action figures and matchbox cars and use the centrifugal force to launch them across the room. 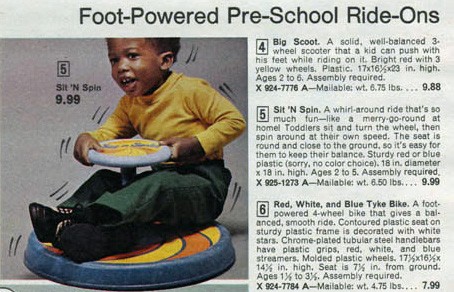 Speak and Spell: Oh, Texas Instruments, would we have passed 4th grade without you? You talked to us like an early Siri. And how can we not remember fondly the toy that helped E.T. phone home? 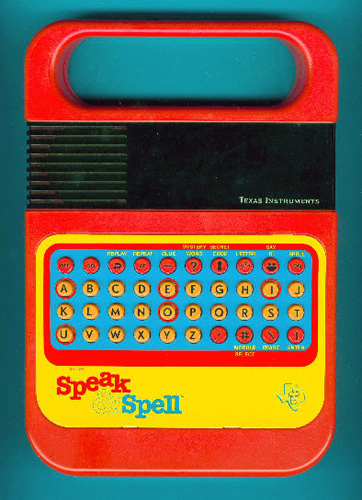 Teddy Ruxpin: Talking about talking toys… who can forget Teddy Ruxpin? “Can you and I be friends?” 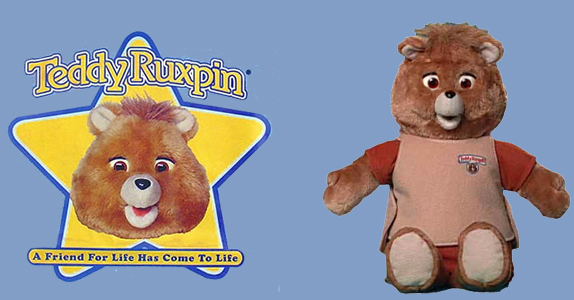 Fashion Plates: Before there was Tim Gunn, there was pink plastic. We had big dreams of designing our own collections. Most involved clothing that matched hot pink with green. 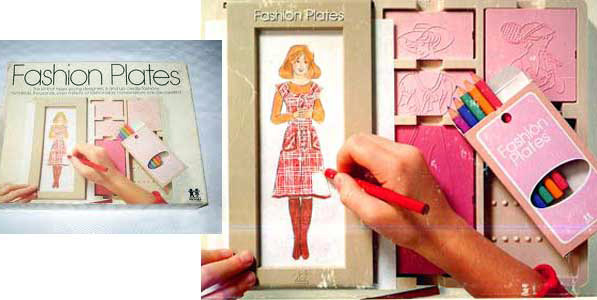 Mastermind: True confession time – we were never very good at cracking the code as kids. But today, it’s a pretty addictive app. 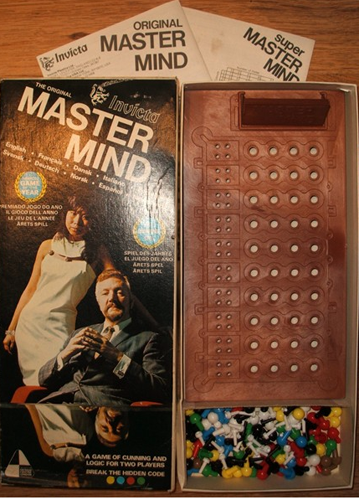 Rubik’s Cube: It is entirely possible that this puzzle was invented to drive little kids crazy. Remember the videos of the people who could solve it blindfolded? 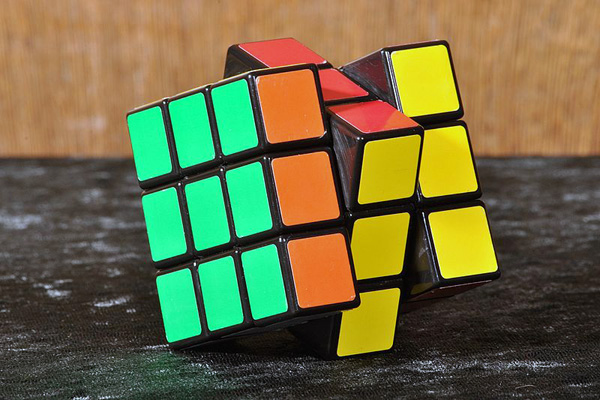 Simon Says: Holds up better for its age than Madonna – and probably had less work done to it. The game you can buy your kids today looks remarkably like the one you played as a kid. Think fast! 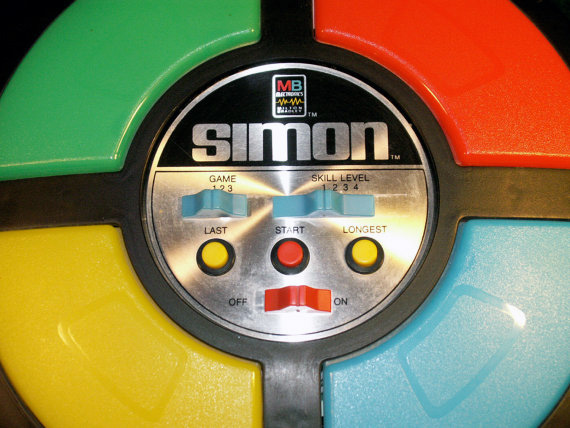 Fisher Price Little People: You could have the castle, the school, the house or the hospital, the farm or the carousel. It didn’t matter, as long as you had the dog, with his bat ears. He rocked. 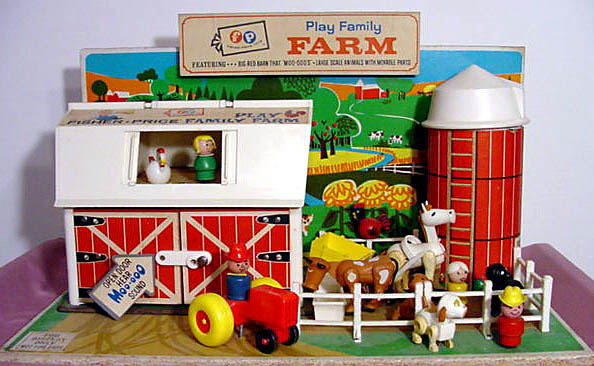 Do you have any to add to our list? Let us know by leaving a comment below!