17 New Year’s Resolutions, According to Your Toddler

Dear Laundry, My One & Only True BFF

My Truth: I’m Not a Big Fan of Babies

Sometimes you’re having a perfectly nice time watching TV when it hits you: The mom on the show you are watching is actually… a better mom than you? Sure, she’s fictional. Sure, she only has to parent in a limited 30-minute to hour-long time frame once a week, whereas you have to parent all the time, even at 2 a.m. when you’d much rather be sleeping but one of your children needs a glass of water. But that doesn’t stop the dark thoughts from creeping in while you wipe old Goldfish crumbs from your couch onto the carpet: I wish I was more like her. Here are some of the absolute best TV moms who put the rest of us to shame. 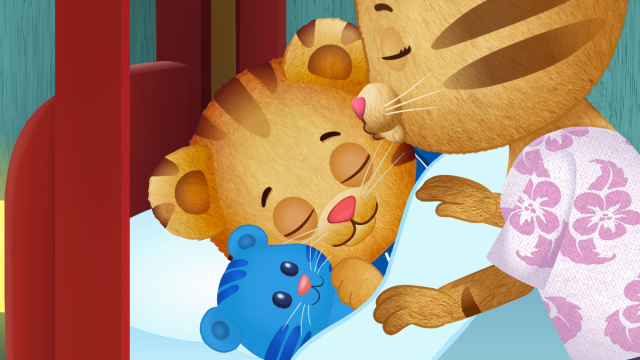 She’s calm, she’s collected, she looks great in a floral, and owns waterfront property. Daniel Tiger’s mom is the mom we wish we could be but know we will never will: She rarely loses her temper with her often petulant toddler, can make up a song on the spot to deal with any challenge, and seems to get all her household chores done despite taking care of a toddler and a baby with only occasional help from Grandpierre and Prince Tuesday as a nighttime babysitter. I’ve never seen one episode where instead of cooking a family meal she orders take-out and cries on the couch while everyone watches TV on their iPads. An icon.

She’s a complete mess, but somehow still a good mom. She only orders take-out and permits her daughter unlimited, sometimes seemingly mandatory screen time, and yet that girl wants to study hard enough to get into Harvard. The dream. She accidentally showed up to her daughter’s first day of school in cowboy boots and a crop top because she forgot to do laundry, which is wildly relatable, except for the part where she actually kind of pulled it off.

Rainbow “Bow” Johnson tries hard to be a good mom, even if sometimes her kids don’t appreciate it. She doesn’t have the cool confidence of some other TV moms, but what she lacks she makes up for in enthusiasm. As a doctor and a mother, she’s a role model to her kids and because she grew up in a commune, she can rock a kaftan, which is really what all moms should be wearing. So much breathing room.

You can’t be a better mom than Tami Taylor. Sorry, it’s just not possible. She’s wise, beautiful, has hair that looks like she bought it off a Disney princess, and on top of all that, she’s a patient and kind mom and wife. Plus, she always has a glass of white wine handy. She’s not just a mom to her daughter, but to all the kids in town. And a lot of them need a mom. It’s not easy being the coach’s wife, but she makes it look like it is.

Lois from Malcolm in the Middle

Lois only sets the bar high because if anyone else had to deal with her kids, they’d have abandoned their family for a beach in Mexico by now. Has there ever been a more relatable mom than Lois? Living on a fixed income with four boys and a very boy-like husband, Lois seems constantly 2020 levels of frazzled, despite existing in the early 2000s. Moms on TV often have to play the straight character, the calm glue that holds the family together. Lois is the glue holding the family together (if only by one glue molecule), but she’s certainly not calm. Her (completely valid) meltdowns at her constantly wild gaggle of children are one of the funniest parts of the show. Gentle parenting is not her style, but can you blame her? Her children slingshotted melons off the roof.

Clair Huxtable from The Cosby Show

You do not want to mess with Clair Huxtable. She’s a lawyer, the wife of a doctor, and the mother of five children. She’s serious and imposing but still low-key the funniest person in the room. Her famous “feminist rant,” where she tells off her daughter’s boyfriend for implying women should serve men, is still as relevant today as it was in the ’80s. Clair is bold. Clair is put-together. You will never be Clair Huxtable. Clair Huxtable would never let her child wear pajamas to daycare three days in a row because they refused to get dressed or find themselves eating applesauce pouches for dinner. Sorry to call you out, but it’s true.

Penelope Alverez from One Day at a Time

A post shared by One Day At A Time (@onedayatatimepop)

As a military veteran, a nurse, and a single mom of two teenagers, Penelope already has more on her plate than most people—even before her mom takes over half of their living room in their already small apartment. She struggles with PTSD, anxiety, and depression, but still works hard every day to care for her kids and manage her family. All while dating! Seems impossible, but OK.

Rarely do we get to see a show where the mom is the fun parent and the dad is the straight man, but Sister gave us just that in Lisa. But she’s not just the fun-loving, permissive parent—the kind of mom you want to tell all your secrets to—she’s also a strong role model who loves her kids despite living in the weirdest situation you can imagine. She adopted a baby by herself, which is already twice as much parenting as many moms do, but then when she found out her daughter had a long-lost twin (ah the ’90s, so many long-lost twins!), she gave up her entire life to move in with a new family and make sure the girls could be together. The only problem with Lisa is that she didn’t sue that adoption agency for emotional damages.

Despite constantly having to be the “responsible parent” to her husband’s “fun parent,” Chilli holds her own in games of pretend. While most TV moms stand on the sidelines when their children play, Chilli jumps right in and creates her narrative as a pirate or a shy bus rider in love with the driver. And unlike most TV moms—who are seemingly perfect—she gets visibly frustrated with her children often (see the Sticky Gecko episode), which is refreshing. A perfect blend of responsibility and fun, the kind of mom you can see yourself in. And admit it, yes, he’s a cartoon but you’d probably marry Bandit, too.

RELATED STORIES:
Hilarious Mom Memes That Are All Too Relatable
37 Netflix Shows Every Parent Should Binge-Watch
TV and Movie Moms We Wish Were in Our Tribe