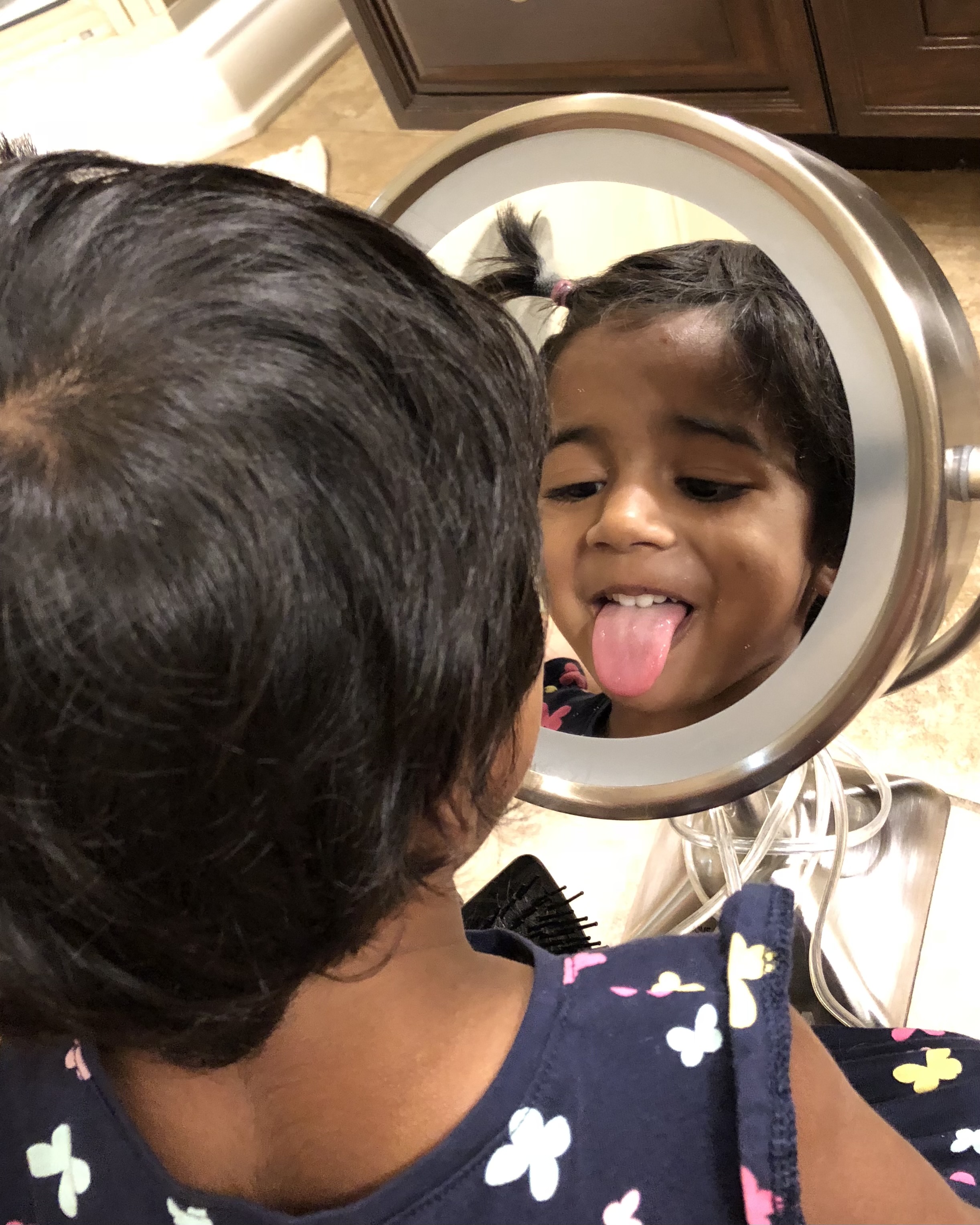 The lunch buffet at the Hyatt in New Delhi is a grandiose feast of sauces, chutneys, chapati, proteins, and more. In the center of it all is a beckoning treat stand displaying delicate chocolates and perfectly swirled gelato. No doubt my daughters, Priya and Ari, had never seen this much food in their lives. At the orphanage the girls were fed rice and occasionally a hard-boiled egg. Ari, my youngest child, weighed a mere 20 pounds at 3.5 years old having been malnourished most of her childhood.

Placing a variety of food on her plate, I curiously watched to see what she’d entertain. I gave her a glass of milk alongside a hard-boiled egg, scrambled eggs, lentils, rice, fruit, noodles, vegetable curry and carrots on her plate.She immediately downed the milk wanting more. I suspected the children only received water in the orphanage. The hard boiled egg was obviously familiar and the scrambled eggs she avoided. Fruit was well received and vegetables were naturally pushed around the plate, although Ari loved raw carrot sticks. Perhaps she liked the crunch or could sense that her body was desperately craving those nutrients? Pasta and lentils were handed over to big sister Priya who wanted all the spicy Indian cooking she could get her hands into!

After an adventurous lunch, we strolled by the treat stand. “Would you like to try some gelato, Ari?” I asked. Scared of what her taste buds may encounter she said a firm “Nah.” A friendly woman behind the gelato stand quickly recommended the coconut gelato. Maybe she could sense my girls were eager to run around the open lobby or it was her personal favorite? We thought the suggestion was a wise choice because coconut milk is a common ingredient used in Indian cooking. Familiarity is a friend during the adoption process. I ordered a coconut ice-cream cone for myself and placed a dab of that sweet goodness onto my daughter’s lips. Her eyes glowed as I handed over the dripping treat. Watching her tiny stomach grow into the shape of a basketball, I knew we both felt content.

Excitement and anxiety are at the root of many discoveries for an adopted child. I recall experiencing the world through my biological children’s infant eyes and those were monumental indeed, but the firsts experienced by my adopted daughters felt extraordinary compounded by their unfortunate beginnings. Our entire family began relishing in seeing the world from their perspective.

Our daughters, Priya and Ari, were brought home from India under the age of 5. Understandably, their environments were flipped figuratively and geographically. Most changes were embraced but some cultural differences were met with obstinance. Even then, I gained empathy for their experience and praised their willingness to explore their unpredictable new surroundings.

While visiting India we spent a great deal of time in the car but there are no laws requiring safety seats and often you see children riding on the front of motor bikes racing down a freeway. This made car rides stressful since our daughters were constantly moving around the backseat trying to get a better view of the outside world. Once we returned home, we enthusiastically introduced Priya and Ari to the high back, harnessed car seat. That didn’t go over very well! We coaxed them into the seat and fastened it securely but then they realized there was no going back. My errands were met with a chorus of wailing and screaming for a week that no lollipop could cure.

The simple pleasure of a warm bath in a bathtub was heaven for Priya and Ari. They’d spend 45 minutes scrubbing their bodies feverishly and giggling through the bubbles. Seeing the sky so blue was something Priya never thought possible due to the air pollution in her village. My daughters had a way of acknowledging each day in quiet appreciation, something I’d seldom observed in a child. At dinner, they fed each other morsels from their respective plates, reminding one another that they would continue to take care of each other. These moments caused me to pause and ponder the unspoken emotion in the room.

I wrote “Finding Family in a Far-Away Land” to capture my daughter’s memories but also to help them remember. Mental memories are important, but their beginnings are engrained in their souls and reflected in their behavior, something that reminds me to see each day with an increased awareness. There is beauty in new beginnings and the joy of overcoming adversity. I hope through reading our family’s story your child enjoys exploring the world through Priya and Ari’s eyes too.

This post originally appeared on The Adventures of a Traveler’s Wife.

Finding Family in a Far Away Land: An Adoption Story

8 Things You Can Do to Support Adoptive Moms

Amanda Wall is an author, illustrator and mother of four with a heart towards adoption. Her debut illustrated children's book, Finding Family in a Far-Away Land: An Adoption Story was published in 2021. She lives in Denver with her family.