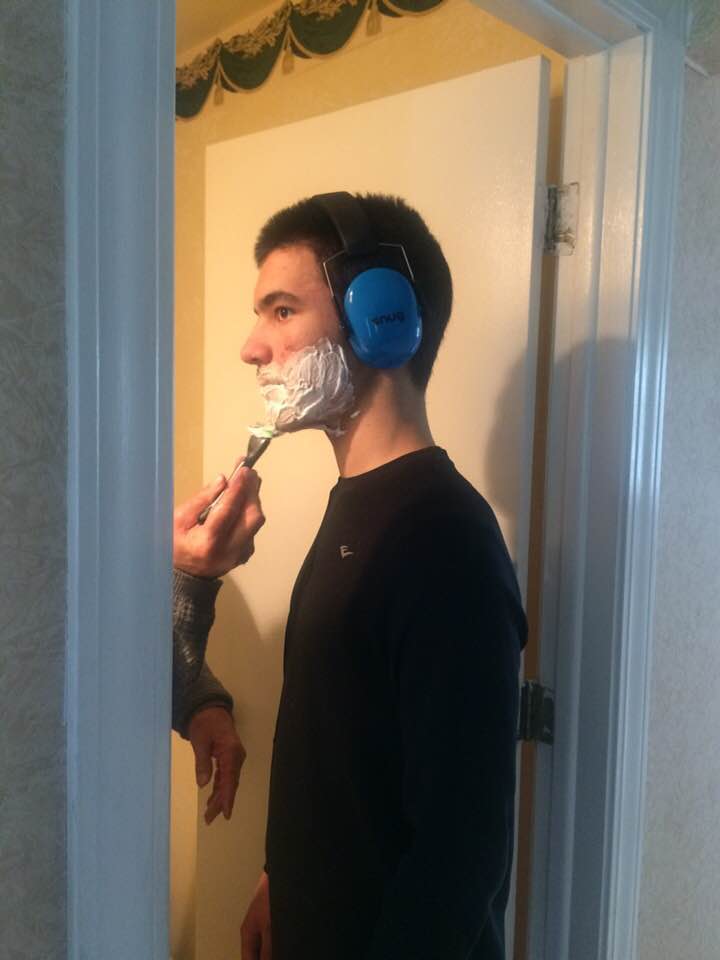 This August, it will be five years that Dominic has been going to Vince. That in itself is a huge milestone as anyone with a child or adult with sensory sensitivities knows. Anyway, earlier in the week my hubby, Lauren, and I had all noticed that Dominic’s facial hair definitely needed some assistance. I mentioned to Lauren that I needed to find a “social story” about getting a shave. Before I had a chance to find one, she took it upon herself to find one and print it out, it had both an electric shaver, shaving cream and razor stories!That meant so much to me, because she didn’t have to do that, she wanted to!

I showed the social story to Dominic and said with tons of enthusiasm, “We are going to shave!” He responded with a resounding “no.” I just kind of casually left the social story out on the kitchen table and more than once, I caught him taking a look at it. Since he showed some level of interest, the hubby and I discussed it last night and decided that today would be the day!! I wasn’t sure what time the big shaving session would be but after we did a family walk (a new quarantine activity) and the frozen pizza in the oven for lunch was almost done, I heard my husband say something like, “Daddy is going to shave and then it’s going to be your turn!”

When I rounded the corner to the bathroom, my husband was making his best effort to shave Dominic’s facial hair. It didn’t appear to be working because either Dominic has too much facial hair or the electric razor, which I am guessing is at least 50 years old, just couldn’t handle it. The noise was really starting to bother Dominic too and he put on his headphones. When my husband went upstairs to get the shaving cream and a razor, I told Dominic what we were going to try next. My husband put some shaving cream on Dominic’s face and he actually laughed!!

The hubby also got some shaving cream on Dominic’s lips which I wiped off. It took longer with the shaving cream and razor, but Dominic handled it like a pro!!! Lauren, the hubby, and I kept telling Dominic how great he looked and Lauren made the comment that it was a “group” effort to get Dominic shaved.

Either way, I don’t know if we would have had the same fabulous results if it weren’t for all of us coming together as a group to achieve the ultimate goal!

I am a stepmom to one and a mom to two. I have been a stay-at-home mom for almost 24 years. Grew up in Maryland and have lived in Michigan since 2001 when my husband got a job here. My 15-year old son has special needs.