27 Beaches We Wish We Were On Right Now 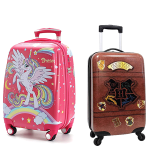 Travel’s Back! Here’s the Best Luggage for Kids on Amazon

We’ve been waiting on details for Disney California Adventure Park’s Avengers Campus for months. The land, which will bring together all the Marvel characters in the universe is slated to open this summer and will finally provide a home to the galaxy’s best and brightest heroes.

On Mar. 6, Red Tricycle was invited to attend a special event at the Disneyland Resort to get a sneak peak at how the newest land is coming along. Representatives met with Disney Imagineers, sampled all the tasty treats, had hands-on interaction with new merchandise and even got to see our fave superheroes in action. Keep reading to get the first inside look at the brand new Avengers Campus!

Avengers Campus is an all-new land where “Earth’s Mightiest Heroes” will unite and seek new recruits. Perfect for fans of all ages, guests will have the opportunity to not just see a hero, but become one and find the hero within.

This living, breathing campus will embrace three core themes of heroism, optimism and empowerment. If you’re wondering about the name, C.A.M.P.U.S. actually stands for Centralized Assembly Mobilized to Prepare, Unite and Safeguard.

The story behind the new campus starts with Tony Stark, who donated the complex which was previously one of his father's former Stark Industries sites. The land stands as a place to train the next generation of heroes, and is packed with authentic details.

To the right of the image above, guests will be able to enjoy an outdoor seating area at Pym Test Kitchen, the on-campus eatery. Park goers will have a prime viewing area to watch for their fave characters at the nearby Avengers Headquarters.

The center of the land, Avengers Headquarters will be a place for heroes to showcase their talents. Atop the building sits a Quinjet, an iconic aircraft often used by Avengers. There will be daily shows on and around the HQ as well as never-before-seen heroes and villains in the area, like General Okoye and the Dora Milage and the villainous Taskmaster and even Loki. Guests will also catch a peek at Iron Man in his new Disney-exclusive suit, the Mark 80.

Training superheroes will need to stay hydrated and fueled and they can head to Pym Test Kitchen, a "food innovation science lab." Taking their cue from Ant-Man's Hank Pym, the restaurant also uses Pym Particles to grow and shrink their food. Don't be surprised to receive a giant soft pretzel alongside an oversized chicken sandwich with a teeny, tiny bun. 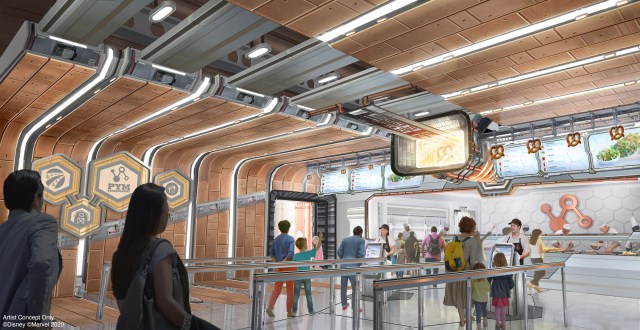 Pym Test Kitchen will also be home to Pingo Doce, the iconic soda from the Hulk franchise. In collaboration with Coca-Cola, Pym's Test Kitchen will be the only place to grab this "sweet drop" beverage. Get ready to see oversized soda cans hanging from the ceiling, and innovative ways to serve up ketchup and mustard.

Next door, adults will enjoy the Pym Tasting Lab with eight draft beers (four of which will be served via reverse draft) as well as wine and cocktails.

Doctor Strange at The Sanctum

The outdoor Sanctum will be home to Doctor Strange, a collection of overgrown ruins. Kids and adults alike can learn the secrets of the mystic arts as well as find magical artifacts.

The Sanctum at Night

Unlike traditional meet and greets with characters, Doctor Strange will help train guests in the mystic arts with powerful spells. The Sanctum will be a sight to behold come evening, with beautiful lights that pulsate with energy. 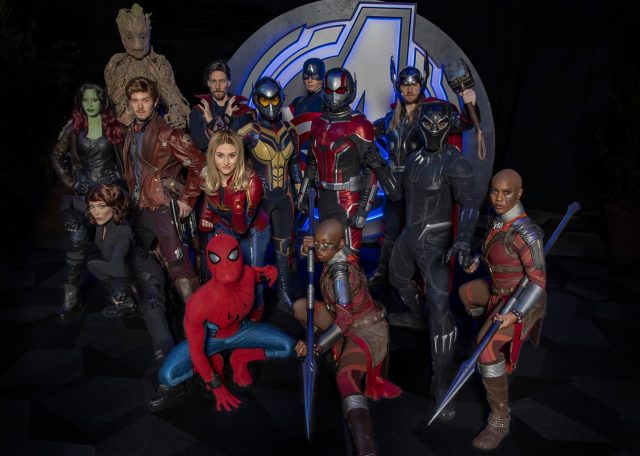 Any fan of Marvel Comics will note that some of our beloved characters are no longer with us. However, "We know now that there’s a vast multiverse with an infinite number of timelines and dimensions; we live in one where the Super Heroes have assembled from across time and space to meet with us at Avengers Campus."

In addition to Guardians of the Galaxy: Mission Breakout, Avengers Campus will bring another attraction to the Marvel Universe. Red Tricycle was among the first to learn about the newly named ride, WEB Slingers: A Spider-Man Adventure.

Avengers Campus prized new address is the Worldwide Engineering Brigade, known as WEB. It's here that young recruits with innovative minds like Peter Parker come to share their knowledge so that everyday people can become heroes. WEB is also the sight for the newest attraction, WEB SLINGERS: A Spider-Man Attraction.

The students at WEB are bright, but a little eclectic, too. Their newest invention, Spider-Bots are designed as "robotic sidekicks" and can build anything you might need to take on evil. When guests enter the attraction, they will get to watch Peter Parker's demonstration about WEB's robots––but something goes amiss! The Spider-Bots become stuck in a replication loop and begin running all over the new campus.

On Mar. 11 it was announced that Tom Holland will reprise his role as Spider-Man in the new attraction!

Hop on a Web Slinger vehicle wearing 3D classes to help the WEB students capture all the Spider-Bots! This innovative attraction uses specially-designed technology that scans body movements 60 times per second, and simulates webs slinging from guests hands. Just reach out your hands like Spider-Man and use the webs to catch the bots and reveal hidden Easter eggs as the vehicles twist and spin. Throughout the ride, guests will virtually pass through the Campus, and at the end will be able to see how many Spider-Bots they caught. Do your best, and you could just make it on the marquee for the entire campus to see!

This ride has no height requirement, so park goers of any size can ride.

The Avengers Campus will remain authentic to the Marvel Universe, even down to the robust collection of menu items. Be prepared to feast on inspired cuisine, sit back with a reverse draft beverage and dine at the Avenger’s favorite hangout, the Shawarma Palace Cart.

Red Tricycle had the opportunity to taste test many of the items you’ll see below, and we have to say the Avengers outdid themselves! You will be pleasantly surprised at the kid-friendly appeal, protein and plant-based options and the family-friendly portions. 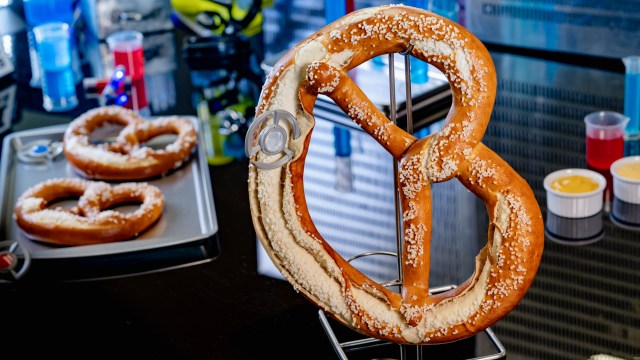 Stop by the Pym Test Kitchen and pick up Experiment No. IP42: Quantum Pretzel, a snack that that has been enlarged by a quantum tunnel. The carby treat is big enough for the whole family and comes with mustard and beer cheese dipping sauce. 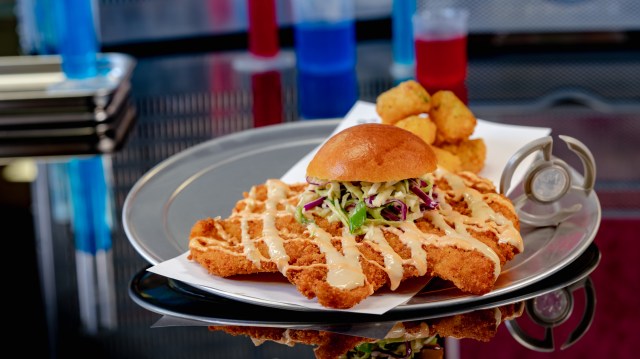 Experiment No. EE90: Not So Little Chicken Sandwich

Looking for a full meal? Order the Experiment No. EE90: Not So Little Chicken Sandwich which features fried chicken breast with teriyaki and red chili sauces, pickled cabbage slaw and crispy potato tots. 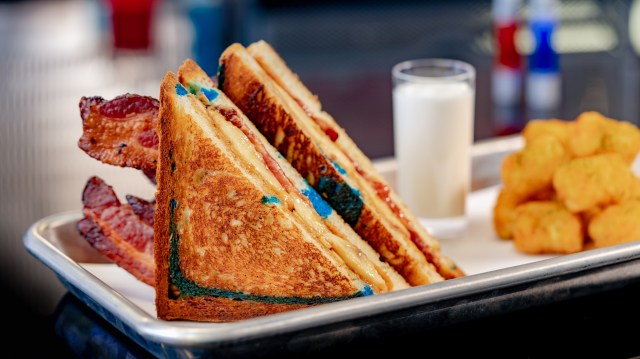 The one of a kind PB³ Superb Sandwich is a feast for the senses. It features peanut butter, banana, smoked bacon and strawberry jelly with a banana smoothie shot and crispy potato tots.

Sandwich lovers will enjoy Experiment No. EE10: PYM-ini, a panini on toasted focaccia with salami, rosemary ham, provolone, sun-dried tomato mayonnaise and arugula with marinara dipping sauce. Purchase as an individual serving or as a long, multi-portion sandwich. 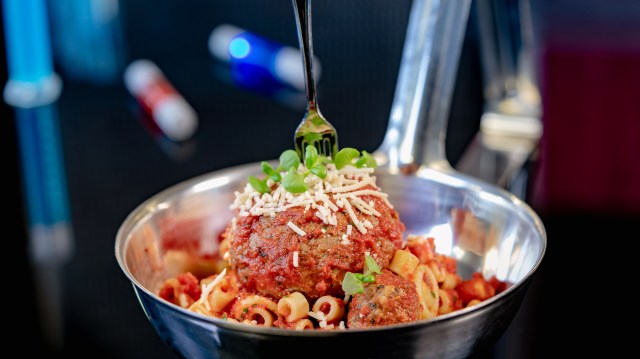 Vegans will enjoy sinking their teeth into Experiment No. EE45: ImpossibleTM Spoonful. This pasta dish is made with plant-based Impossible™ large and micro meat-balls, served in a super-sized spoon with a tiny fork. 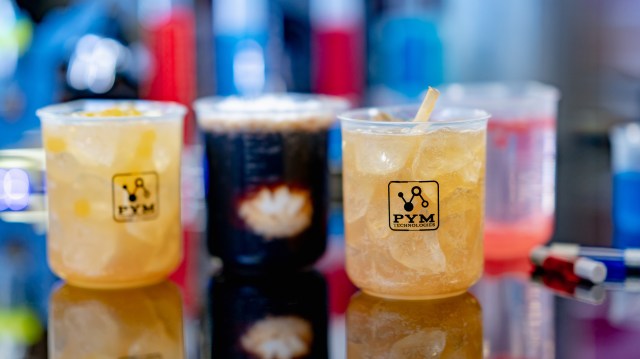 Get refreshed with a craft beer like theblood orange hefeweizen to an amber lager and more. Enjoy flavors like habanero and mango syrup, vanilla ice cream, lemon juice or cherry flavored pearls with an alcohol base of tequila, stout, gin or hard seltzer. 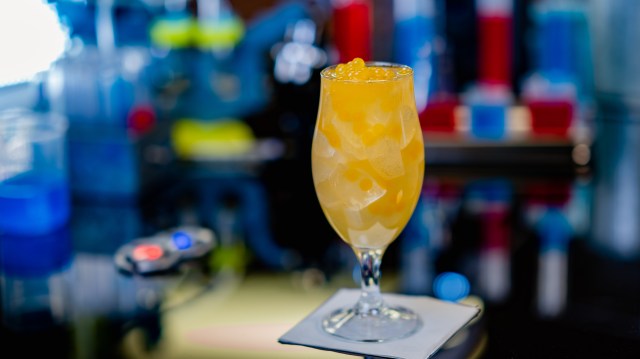 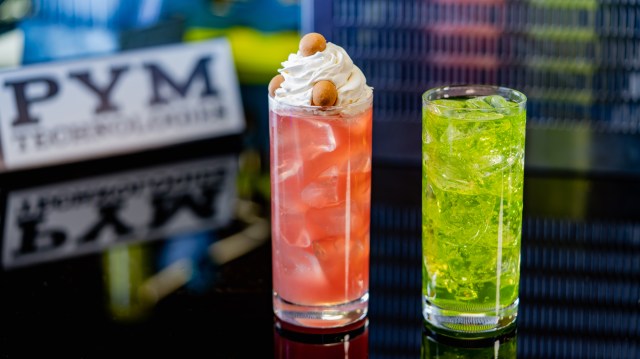 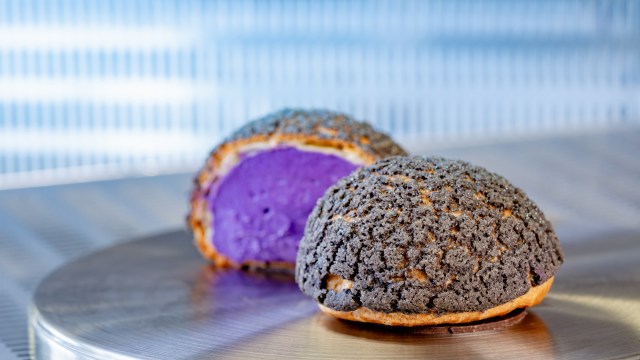 Terran Treats is a brand new cart that will be located near Guardians of the Galaxy: Mission Breakout! Created by Taneleer Tivan and his love for collectables, this cart will feature a creative intergalactic menu. Featured above is the Cosmic Cream Orb, a crispy cream puff with whipped raspberry cheesecake mousse. 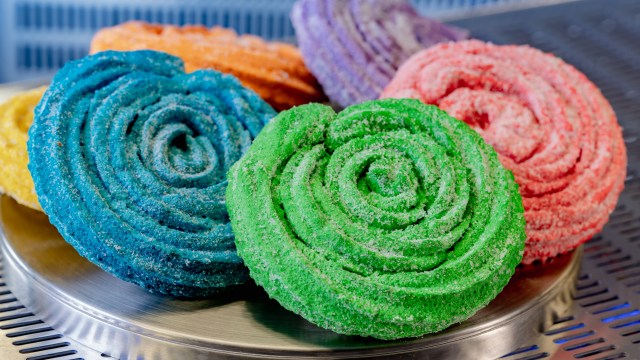 Disney has developed over 100 new products, including park exclusives that will outfit your Avenger with everything they need to join the next generation of superhero recruits.

WEB Suppliers and the Campus Supply Pod will be the destinations Avengers Campus gear and supplies. A short walk from WEB SLINGERS, park goers can expect to find performance-based apparel, robotics and STEM-based activities. 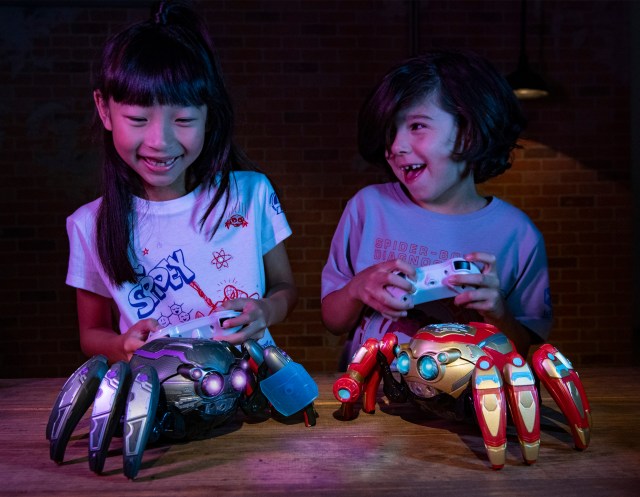 Grab your own Spider-Bot as seen in WEB SLINGERS: A Spider-Man Adventure. These buildable Spider-Bots can battle each other, have eight legs, light and sound effects, 360 degree remove functionality, and will help your little hero on the journey to saving the universe. 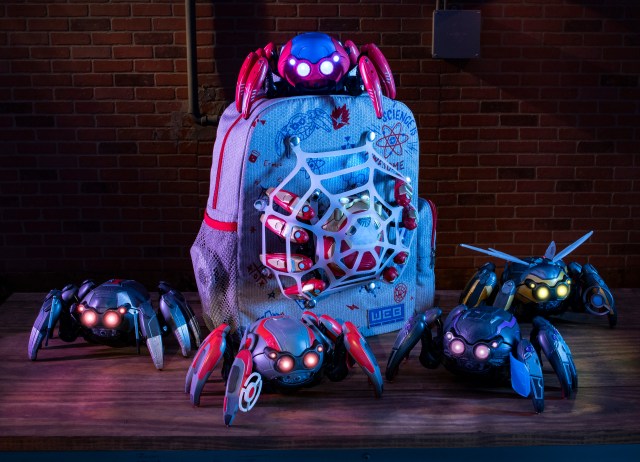 Heroes can use several tactical upgrades inspired by faves Black Panther, Iron Man, Black Widow, Ant-Man and The Wasp. Each upgrade not only looks different but brings a whole new set of battle options.

Carry your Spider-Bot in style with the Spider-Man backpack which offers the perfect spot to load your sidekick. 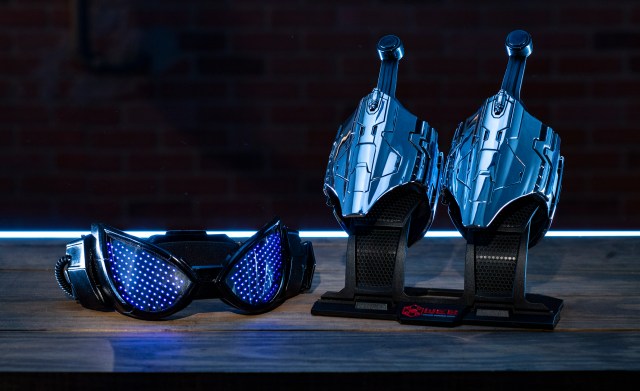 Sure to be a big seller, Spider-Man light goggles and Web Shooters will be sold at WEB Suppliers. The light-up goggles feature 17 expressions, while the Web-Shooters are worn as cuffs and will have authentic lights and sounds.

The hype continues with Disneyland Resort-exclusive Funko Pop! vinyl figurines. Guest will be able to initially shop the Spider-Man with Spider-Bots and Iron Man, with the potential for more to be added in the future. 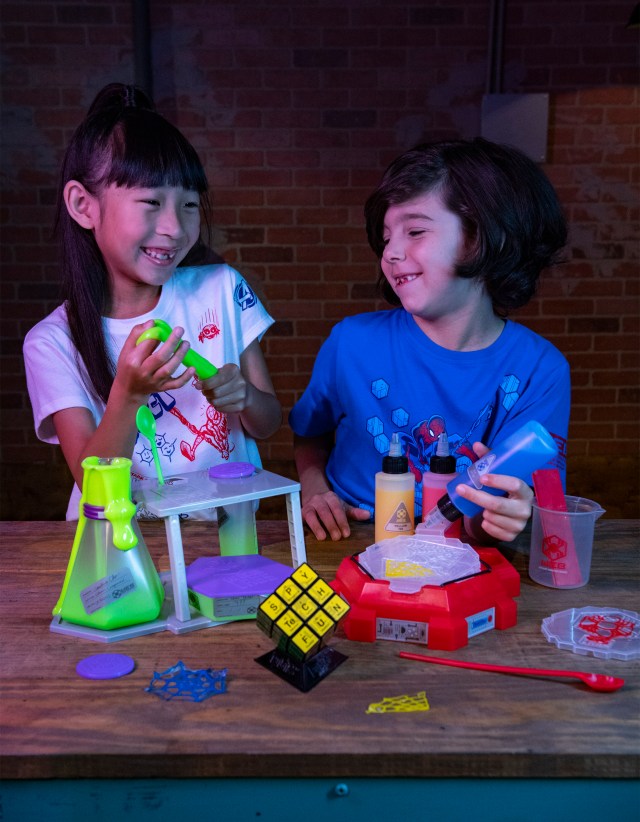 WEB Recruits will be excited to get their hands on S.T.E.M. Compound Kits from WEB Suppliers. Little learners can create webs or Gamma Glow Goo, and learn about the science behind their fave heroes like the Incredible Hulk and Spider-Man. 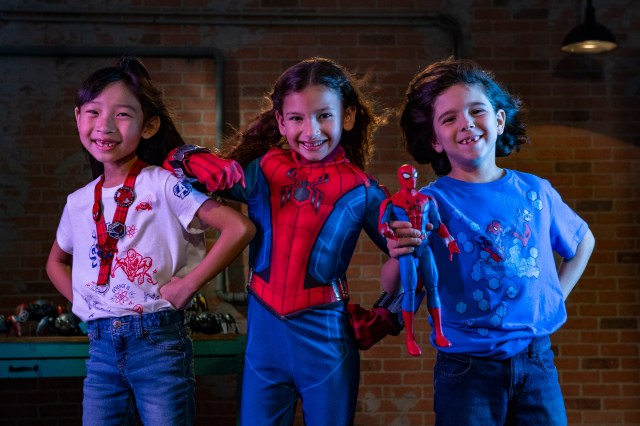 Lots of apparel items await at WEB Suppliers. Amongst the everyday wear, superheroes can also snatch the park exclusive Spider-Man costume. featured above.

Are you excited yet? Avengers Campus at the Disneyland Resort, inside Disney California Adventure Park opens July 18, 2020!

All photos: Courtesy of Disneyland Resort

Disneyland’s New Marvel-Themed Land Is Closer Than You Think