Inspired by a certain trick-or-treating dancing bear who once jetéd her way up and down the block, this collection of combo costume ideas will surely get your kid an extra piece of candy from impressed neighbors. Out-of-the-bag Halloween costumes are so last year. Give these a go this fright night and be the talk of the playground.

1. Ballerina Bear – The costume that started this story is adorable from top to bottom in combining girly childhood favorites teddy bears, tutus, and tiaras.

2. Vampire Bunny – The well read among your neighbors may get the James Howe Bunnicula reference, but most will likely just laugh-in-terror at the fangs, floppy ears, and bloodied carrots. 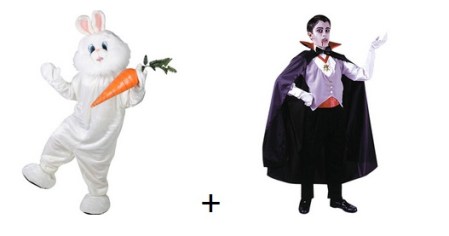 3. Sir Princess-A-Lot – Girls too often get pigeonholed into dainty medieval roles, but not this year! Raid your little boy’s toy chest, then mash-up the traditional pastel-clad princess garb with a shield, sword, and cape.

4. French Mer-Maid – The mythical creature from the sea meets 20th-century servant girl in this curiously odd costume. When a feather duster and white doily apron is paired with a classic mermaid costume, many laughs will follow!  Helpful tip: don’t Google “French Maid Costume” with your kids around, trust us! 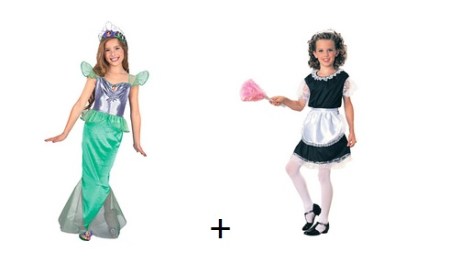 5. Piglets in a Blanket – A delicious costume idea for twin babies. A pair of Piglet suits and a comfy tan blanket is more than appetizing this Halloween. Pass the mustard!

6. Steampunk Rocker – A mohawk and a monocle, and a tattered Ramones tee and a top hat — there are countless possibilities with this hip combination costume. 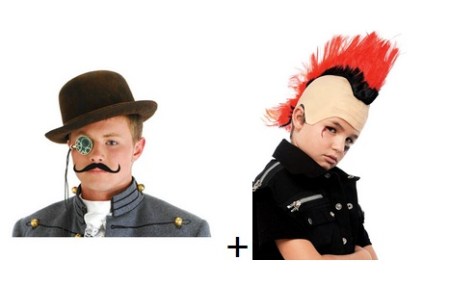 8. Zombie Potter – How could Harry Potter ever get cooler? Make him join the legion of the walking dead! Traditional Potter garb combines with classic zombie accents to frighten and delight. 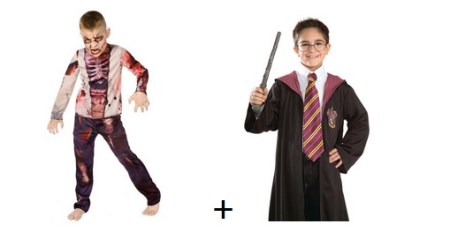 9. Harry the Friendly Ghost – White sheet, round glasses, lightening bolt and a scarf make this the easiest combo costume ever, and a clever take on the traditional Harry Potter look!

What’s the wildest combo costume you’ve ever seen? Share your clever costume ideas in a comment below.