Spring break vacations were grounded in the name of social distancing, but that doesn’t have to stop you from experiencing the world! Head out on the virtual highway, see what’s happening outside your 4 walls and gather ideas for planning your next family vacay when we’re free to roam. From squeal-worthy kittens to town squares in ancient cities, we promise we have a cam for you! 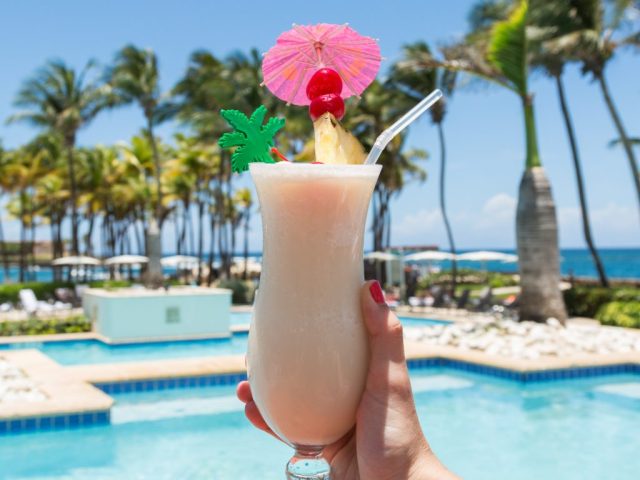 Channel tropical island vibes with 1950s inspo from Caribe Hilton — an iconic resort in San Juan, Puerto Rico that coined the original Piña Colada recipe. Caribe bartender Ramón “Monchito” Marrero created the drink in 1954 while mixing tropical fruits to come up with a refreshing welcome drink for hotel guests. The first Piña Coladas were non-alcoholic and made in a shaker (blenders didn’t yet exist). It wasn’t until years later that Monchito added local rum to his concoction and created what’s known as the world’s most popular vacation cocktail.
After serving the Piña Colada for 35 years, Monchito’s signature beverage was declared the official drink of Puerto Rico. Using the recipe below, families can recreate the original Piña Colada (hold the rum!) for the ultimate ‘mocktail’ that’ll have everyone in your house day-dreaming of sunshine, sand, and palm trees.
Caribe Hilton’s Original Piña Colada (Virgin!)
1 oz. coconut cream
1 oz. heavy cream
6 oz. pineapple juice
½ cup crushed ice
Directions
Mix cream of coconut, heavy cream and pineapple juice in a blender. Add ice and mix for 15 seconds. Serve in a 12 oz. glass and garnish with fresh pineapple and a cherry. Parents can add 2 oz. of rum to create the signature libation. 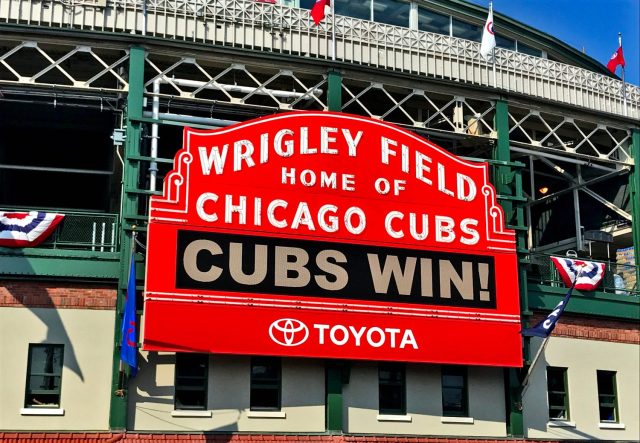 MLB is on a hiatus for now, but check in on the iconic Wrigley Field, home of the Chicago Cubs, via the webcam with views of the famous sign. Wave to the runners you'll see periodically move across the screen and dream of warm summer days getting a sunburn in the bleacher seats, heckling anyone putting ketchup on their hot dog. 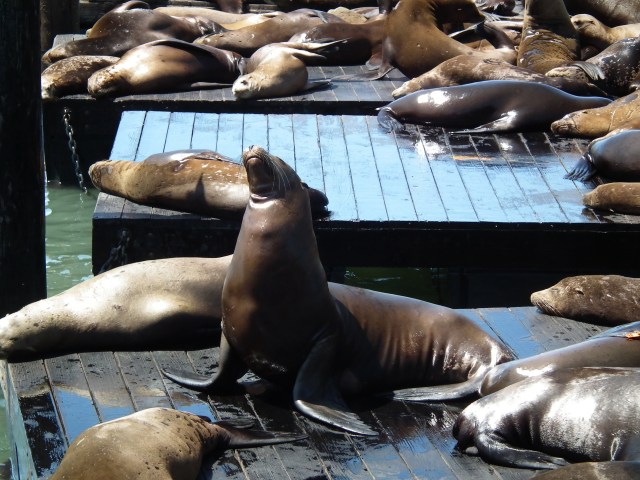 Watch the adorable wild California sea lions bask in the sun at Pier 39 via a live webcam and learn the fascinating history of how they came to call this urban locale, with views of Alcatraz and the Golden Gate Bridge, home.

For other ideas on how to see San Fran from home, read our story here. 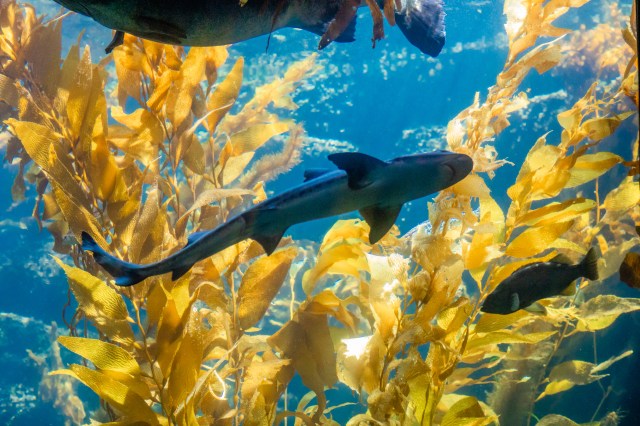 Birch Aquarium's two-story, 70,000-gallon Giant Kelp Tank houses Leopard Sharks, Moray Eels, an endangered Giant Black Sea Bass and much more! You can take in the peaceful views of these magnificent underwater creatures 24/7 via their Live Kelp Cam. Just be advised the tank is naturally lit by sunlight during the day, so it goes dark at night. 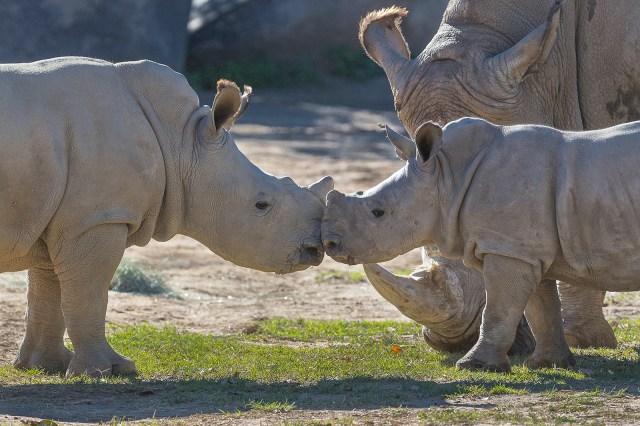 Slip into your favorite khakis and pretend you're on an African safari. San Diego Zoo Safari Park offers a giraffe cam to see giraffes and rhinos roaming the African Plains habitat, a tiger cam that shows majestic tigers sleeping and prowling and a view of gentle tusked giants on the elephant cam. San Diego Zoo also has a brand new baboon cam where you can watch primates foraging, grooming, exploring, relaxing and just being outright adorable!

For other ideas on exploring San Diego from a safe distance, read our story here. 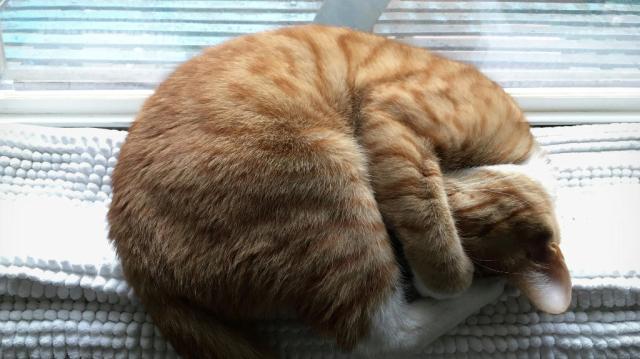 Brooklyn Cat Cafe was one of the first cat cafes in the US and the only one in New York City run by a non-profit animal rescue organization, Brooklyn Bridge Animal Welfare Coalition (BBAWC). The cafe's mission is to save the city's cats while offering a hip and inviting destination where cat lovers of all ages can interact with adoptable animals. Their live kitten cam offers views of their kitten terrarium which houses a rotating cast of kitten families not yet ready to interact with people or other cats.

Fun fact: members of the SNL set design crew helped in the design and creation of the space. 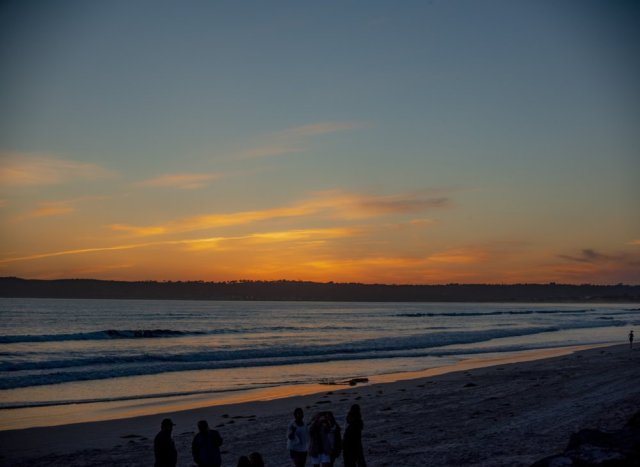 Keith A. via Yelp

The sound of waves crashing, the smell of salt in the air, and the sea breeze tangling your toddler's hair into a bird's-nest-like style may not be in your future, but Hotel del Coronado's live beach cam offers a glimpse at the calming ocean waves. 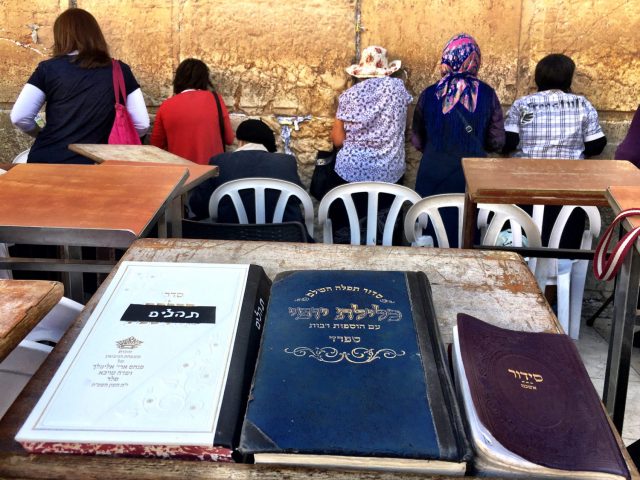 Traditional Easter plans may be going out to pasture, but how about a visit to Jerusalem's Western Wall? Some believe this wall is a direct line to the big guy and visitors come to pray and write prayers on bits of paper they place in cracks of the wall. Twice a year, these written prayers are collected and buried in the cemetery at Mount of Olives, a mountain ridge adjacent to the Old City that's been used as a Jewish cemetery for over 3,000 years. You can view the site via the Western Wall live cam. Interesting fact: You'll see a dividing line down the middle. The left side is for men and the right women. They cannot pray together. 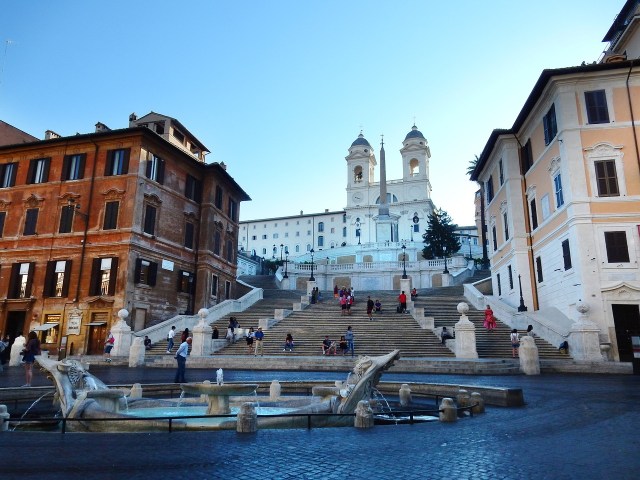 Be introduced via live webcam one of the most popular attractions in Rome, the Piazza di Spagna with views of the Spanish Steps and Bernini’s Fountain of the Ugly Boat. You can even hear the soothing sounds of the fountain flowing with the square emptied. At the right-hand corner of the Spanish Steps is the home of British Poet John Keats, who gave us the quote, "Do you not see how necessary a world of pains and troubles is to school an intelligence and make it a soul?" Seems fitting for these times. 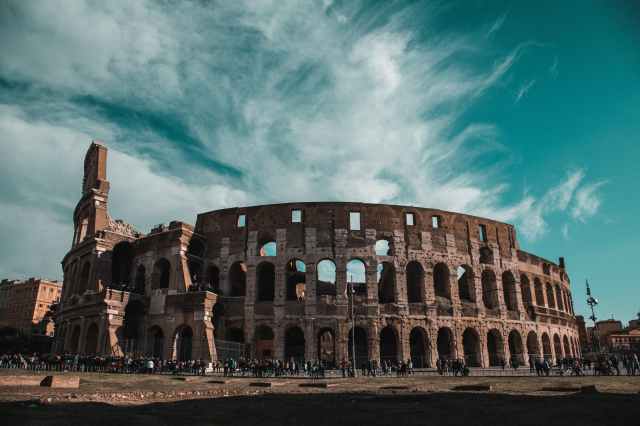 With over 2,000 years of history, the Roman Colosseum has over 6 million visitors per year. After it's completion in the year 80, it allowed more than 50,000 people to view exotic animals, executions of prisoners, recreations of battles and gladiator fights. You won't see any of that now, but via the Colosseum live webcam you can visit this wonder of the world and the ruins of the gladiator gymnasium. 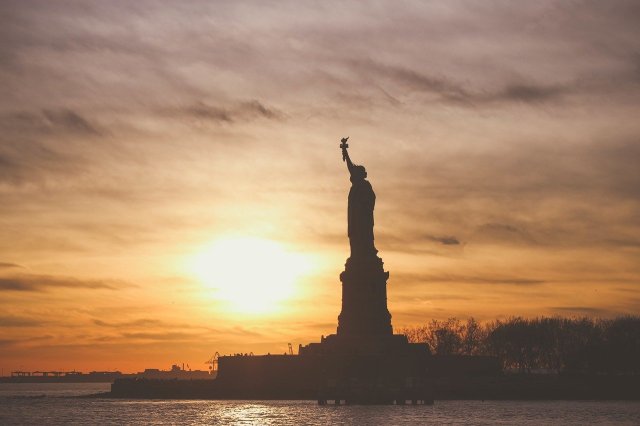 Take in views of Verrazzano Bridge, Freedom Tower and the Statue of Liberty from a live webcam at The Liberty Warehouse, the only spot in NY where Lady Liberty's face is front as she looks to France, who gifted us this symbol of hope as a symbol of friendship.

For other webcam views of the Statue of Liberty, click here. 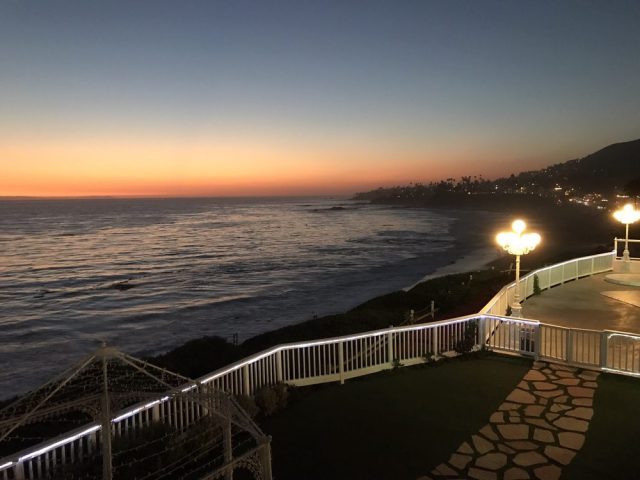 Sit hand-in-hand and take a virtual stroll along the beach to enjoy California coastal views via The Cliff Restaurant's live webcam. The beaches are emptied and quiet with everyone socially distancing, but you can see the seagulls diving for their snacks. 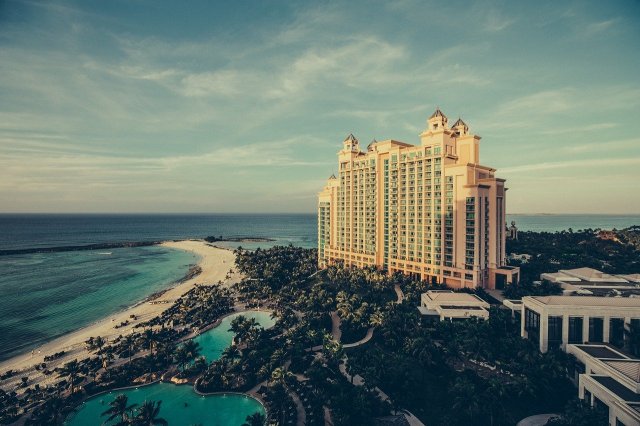 You'll want your Piña Colada poured and on the ready for this one. Paradise Island is best known as the home of the sprawling Atlantis with its 141-acre water park filled with 20 million gallons of water. The stunning blues of the Caribbean are within your reach via the Paradise Island webcam. You can even turn on the music feature to add a little local ambiance. 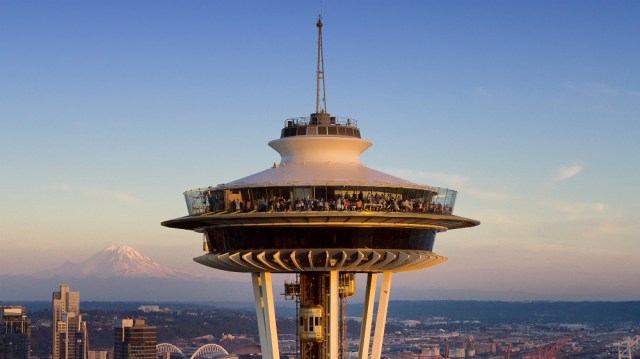 Scratch that cabin fever itch with the Space Needle Webcam. The 360-degree views show the ocean, ferries coming in from Bainbridge, Seattle's museums and the mountain.

For other ideas on exploring Seattle virtually, read our story here. 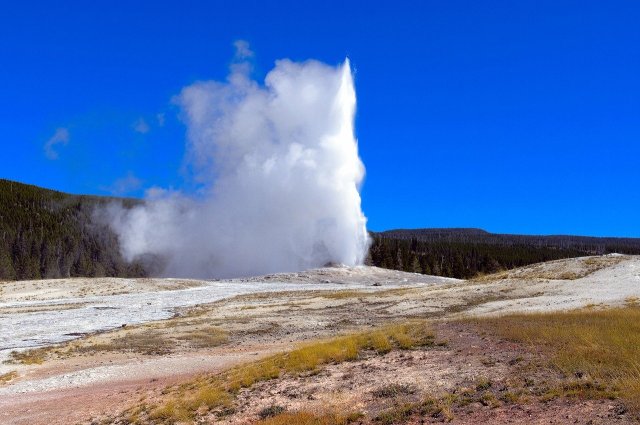 And there she blows! A family visit to Yellowstone National Park, the country's numero uno national park, tops many travel bucket lists. Mostly due to the legendary Old Faithful geyser. It erupts every 35 to 120 minutes for 1 1/2 to 5 minutes at a time and reaches max height ranges from 90 to 184 feet. While your road trip will have to wait, get excited watching its show via the live webcam. 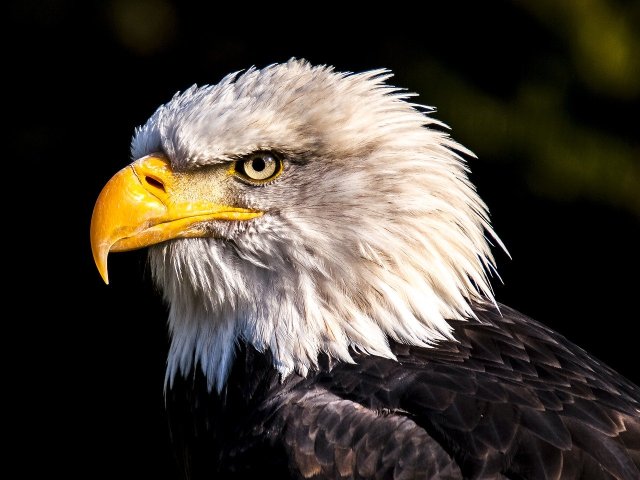 Check in on the symbol of our nation, the bald eagle. The Raptor Resource Project team constructed a nest near a trout hatchery in Decorah, Iowa, in the hopes that two recently evicted eagles would take it over and build upon it. Their dreams were realized and now you can watch as the eagles come back each year to raise another brood via the webcam. 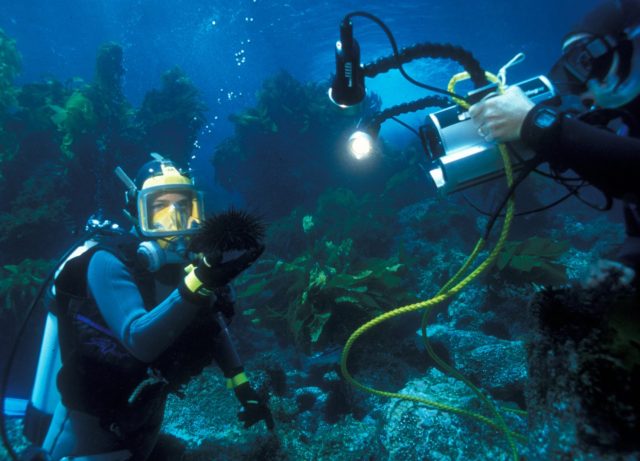 Enjoy the calming effects of Channel Islands Kelp Forest, which sits in the landing cove of Anacapa Island, one of five islands in Channel Islands National Park off the coast of Southern California. The kelp's movements in the water are almost hypnotic, which will be useful for toddlers in need of a 'lil catnap. It's home to one thousand marine species, so keep your eyes peeled for one of them to visit your screen. 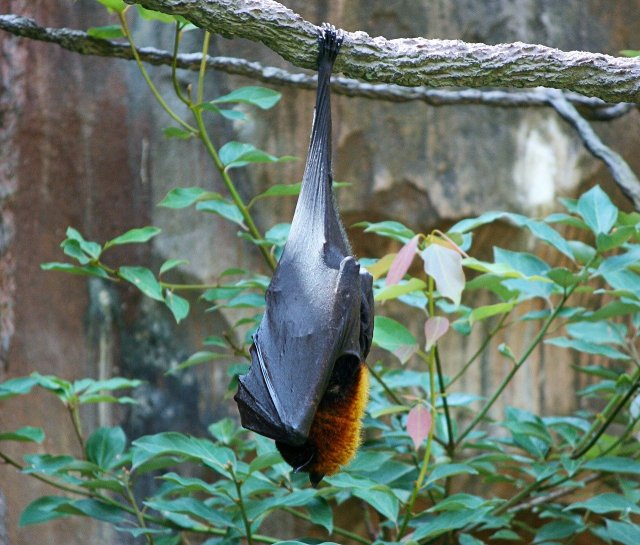 Do NOT be fooled. Giant flying foxes are NOT actually foxes. They are bats. The giant flying fox cam lets you observe the largest species of bat in the world, the Malayan flying fox, which can have a wingspan of 6'. Not 6". 6'. Like the size of a human male. 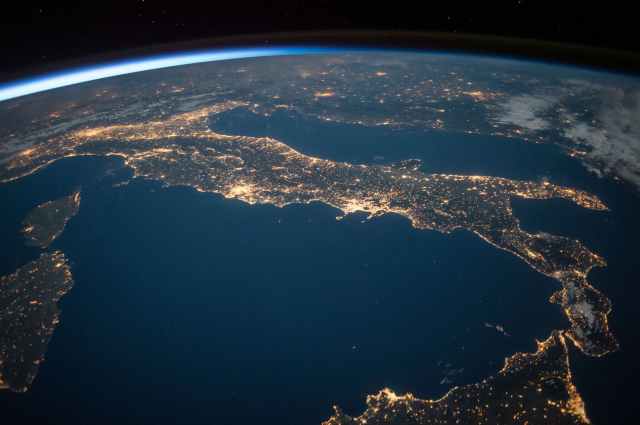 Space fans will love checking on the International Space Station live cam that includes internal views when the crew is on-duty and Earth views when they're having downtime. The video feed includes audio of conversations between the crew and Mission Control. With the Space Station orbiting Earth every 90 minutes, you'll see a sunrise or sunset about every 45 minutes. Even when the external camera appears black you can sometimes catch a lightning show or city lights from below. 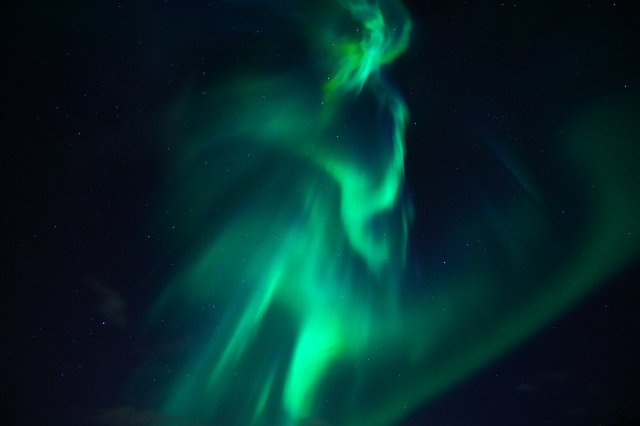 The webcam at Churchill Northern Studies Center is located directly underneath the aurora oval, making it one of the best places in the world to watch the aurora borealis, a.ka. the Northern Lights. Best views of the show are during the months of February and March.

If you get sucked into watching these live feeds and want to fall down a rabbit hole of webcams, check out an impressively diverse collection on Explore.com.

How to Explore Your Favorite Seattle Spots From Home