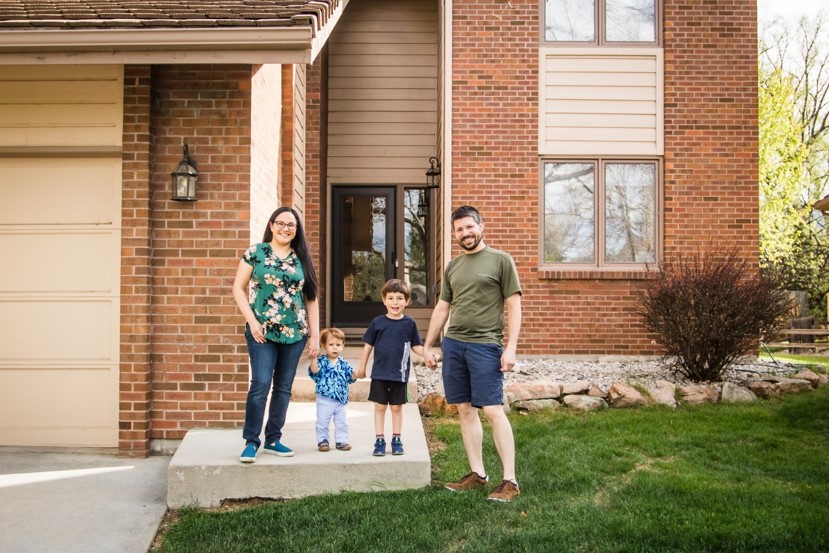 Thinking of introducing a second (or third) language at home? Valicia Saucedo Trowbridge describes her approach to multilingualism, centering around respect for language and culture … and her love of books!

We interviewed Valicia to get the scoop on her method. Check out her answers below!

What’s your background?
I’m a mom, first and foremost, of N and F (5 and 1.5 years old). For languages, I’m a native Spanish speaker and learned English when I was in elementary school. I am proficient in Japanese and can understand some Korean. I’m an Associate Attorney at an immigration law firm in Boulder, Colorado (and by night, the voice artist for Habbi Habbi Spanish Books!). I studied Political Science and Japanese in college, so my interests in the law and in culture and language started young!

Tell us how young your interest in (the three!) languages started! Some parents are curious about what the right “age” is.
Well, learning Spanish comes from my family and heritage—so that started before I can remember. My grandparents were immigrants, and my parents placed great value on the Spanish language. They raised my brother and me as monolingual Spanish speakers until we started school in order to preserve the language.

My interest in Japanese started when I was about 7 years old. There was a sister-city program we had between my hometown in California and Ono City in Japan’s Hyogo Prefecture. My family had exchange visitors stay with us, and this was my first exposure to Japanese. I remembered I loved the bright vowels —because they were the same as Spanish vowels, which made Japanese feel accessible, and I took a personal interest in it. I started learning it, spent six weeks in Japan during high school, and minored in Japanese in college.

I learned Korean after college actually—my friend recruited me to teach in Korea after college. I was fascinated by Korean because it is a scientifically created written language. Linguists created Hangul—so when you look at written Korean, you can pronounce it correctly (vs. character memorization).

What do languages mean for you? Why do you value multilingualism?
For me, language has always about connecting with people. Spanish meant connecting deeply with my grandparents and my community. With Japanese, I wanted to be able to talk to people in the exchange program and folks when I visited. It makes such a difference to be able to talk to someone in their native language. It opens up a whole new level of connection, empathy, and understanding. Also, Spanish, for example, is spoken natively on three continents, so language opens up a substantial part of the world!

How do you think about the role of language and learning for your kids?
It’s deeply important to me. But my approach has to be different from my parents’ approach for me because my husband does not speak Spanish fluently. When I was at Stanford, I did a ton of research on dual immersion schools, and my big takeaway was that the *respect* that the “instructor” has for the different languages makes all the difference. So that’s how I treat language learning at home—I try to show respect and value to both English and Spanish, so my boys know that both are important.

What about other languages with your kids? Do you think it’s “too much” to bring in other language exposure at a young age?
My philosophy (and each parent’s may be different!) is that the more the better because kids’ brains are such good sponges at such a young age. That’s why even though we are a Spanish-English household, I have the Habbi Habbi Chinese books as well. That’s why we also carry Japanese and Korean books too.

One fun story—early on, N learned the word “bilingual” and now identifies himself as a “bilingual” person—knowing Spanish and English. One day, we went to our favorite neighborhood Japanese restaurant, and I started speaking to the owner in Japanese. N turned to me and said, “Mommy, you’re not bilingual. You speak more than two languages.” And I told him, “Yes, I’m multilingual.” And he said “I want to try.” And I think that’s wonderful.

How do you support their interest in language learning?
Like so many parents, it is books! That’s why I am so tickled that my “other” job is as a voice artist for Habbi Habbi, because I am in love with the mission. I also love that we have the Chinese set here at home—so N and F can get exposure with the Wand, even though I don’t speak Chinese. It’s fun though because my husband took online Mandarin classes in college. So now that N has picked up a few words, it’s a secret language only N and my husband know, and N is really enjoying that.

I also have tons of books collected over the years. I pick up books whenever I am in a new country. My friends gift books to me because they know how much I love them. It might sound crazy, but I started collecting books when I was in Japan at 17 years old, so you can see how long I have thought about this!

What does success in language learning look like for you?
So much of it depends on the kids! So, it’s not so much the number of languages and fluency in them but more the things that language exposure brings. I so badly want my kids to be global citizens, to have the world open to them through language, and to have real friendships with people across the world. So if they take any interest in any language, I’m on it. I want to nurture that interest and I’m confident it will open a whole new set of doors and life experiences!

Habbi Habbi Reading Wand & Bilingual Books is the easiest way to start kids on Chinese & Spanish. Just turn on and tap. Every inch is tappable, and our books are as intentional in content as they are beautiful - topics like kindness, emotions, and more. @BeHabbi | habbihabbi.com.