Hosting a Super Bowl party this year? Score serious MVP (Most Valuable Parent) points during your football fete with spirited games and crafts your tiny teammates will love. They play while parents catch those important game-making moments. Sounds like a win to us. Go team! 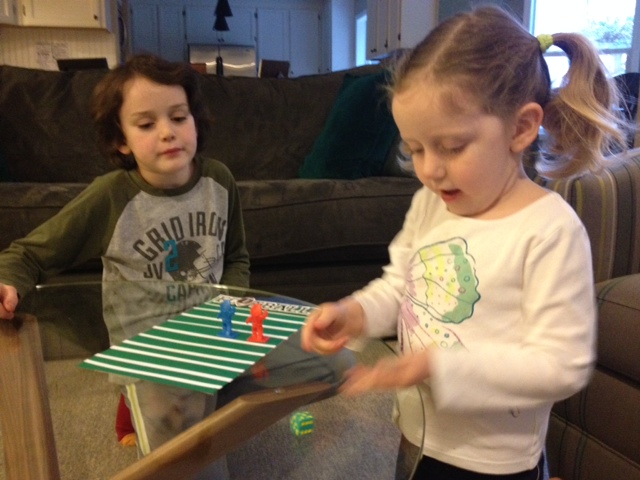 Roll the dice. Recycled cereal boxes turned football fields make a quick and simple game for kiddos to play during the half. Once the playing space is crafted, grab dice and players from board games around the house and get rolling. Assign yardage gains and penalties for each number on the die (think: 1=20 yard gain, 2=10 yard penalty). Then set your players in one end zone before racing to score on the other side. Touchdown!

Play Hut, Hut, Hike! Sit the petit posse down for a game of hut, hut, hike! It’s like duck, duck, goose, but football style. Leave lots of playing space for this preschool fave.

Set up a coloring station. Got crayons? Set out cups of your team’s favorite colors alongside free football themed printables, and you’ve scored an easy craft station for the tot lot. Add in a coloring contest to sweeten the deal; one winner for each quarter does the trick! 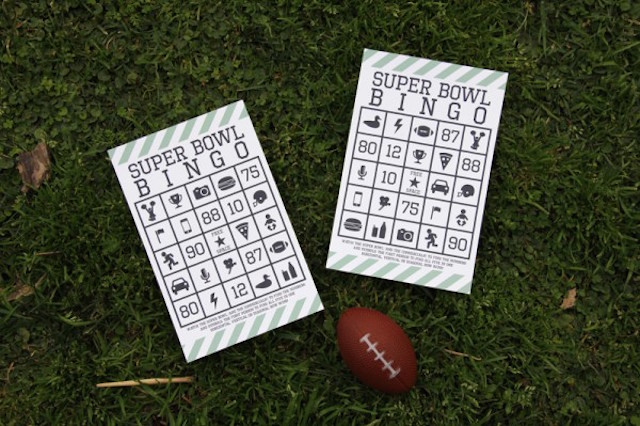 Play Bingo! When your tiny teammates slow down enough to sit through a quarter or two, hand out football Bingo cards from Studio DIY. Goldfish crackers or M ‘n’ M’s in your team’s colors make great markers for little hands. Plus, they double as munchies while you watch. Don’t forget the prizes for this one!

Get moving. Add a little giddy-up to your game watching routine when you turn common football calls into a game akin to Simon Says. Here’s how it works. Come up with a list of plays, calls or words often heard during a game (think: quarterback, penalty, first down). Then assign an action for each word, like jump three times or touch your toes. Whenever the kids hear a “buzz” word, they do the action. The best part? Join in to get a workout in while you watch. Two birds, one stone is how to truly rock the Super Bowl!

Show your spirit. Face paints and team tattoos go a long way to entertain the tot lot. Set some out at a spirit station so the littlest fans can show their support. Go team! 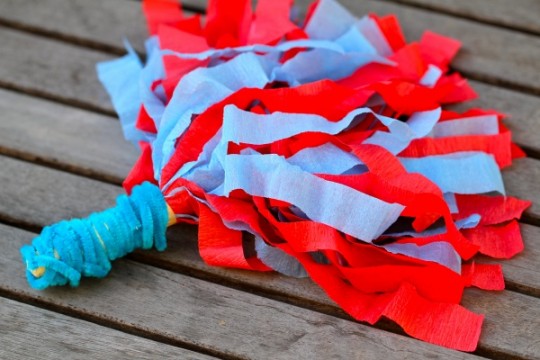 photo: Cooking with my Kids

Cheer for your team. Two, four, six, eight! We super appreciate this simple pom pom tutorial from Cooking with my Kids. Have little players each make one so they can cheer on their Super Bowl heroes from the sidelines.

Pass the helmet. We love this game-winning idea from About Parenting. All it takes is a football helmet and a few goody giveaways. Fill up the helmet with candy and football themed trinkets (think: stickers, pencils, tattoos). Then crank the tunes and start the helmet around the circle. When the music stops, the player holding the helmet gets to pick a prize from the loot, before starting the helmet around again. Sweet! 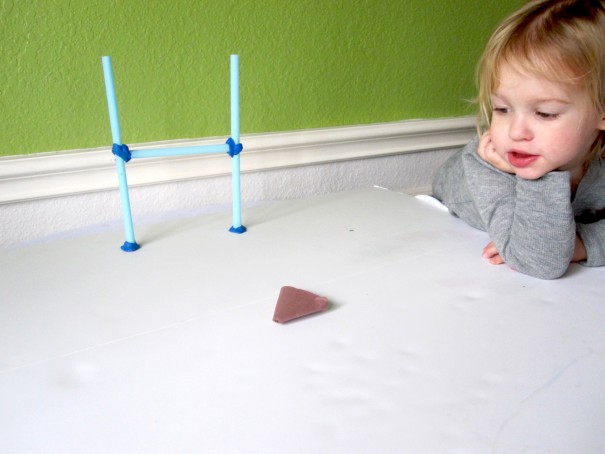 Play flick football. Pick your teams then get ready to rumble… on the paper football field. We’ve got everything you need to know to set up and play this old school fave. Grab the play-by-play here.

Find the football. Set up a simple scavenger hunt to keep the littlest sports fans active during lulls in the Big Game. Hide mini footballs or helmets around the house, and print out a simple key so everyone knows what to look for. Then send them on their way, seeking hidden game day treasures. 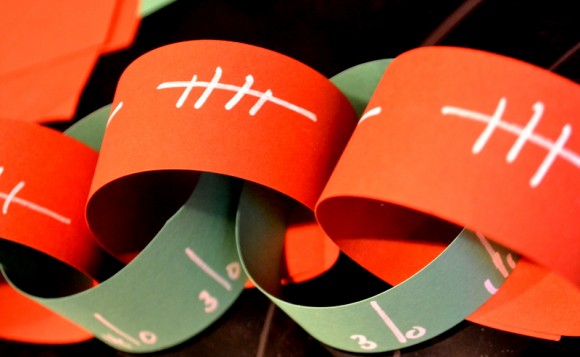 Deck the halls. Think holiday paper chains for football’s biggest fans. Cut out colored strips of paper before the kickoff. Then let your cute crafting crew make chains in their team’s favorite colors, with brown ball laces and green field yardage mixed in. Thanks to Catch My Party for sharing this easy game-time craft!

Spy something good. Pass out these sweet counting I Spy cards from Pleasantest Thing when the wee ones need a distraction. How many things can they find, and how quickly can they do it are two ways to play this tot-friendly game.

Do you have a favorite football craft or activity to add? Tell others about it in a comment.