8 Maternity Subscription Boxes & Rentals You & Your Bump Will Love 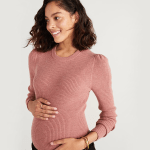 Work It Out in These Maternity Athletic Leggings You’ll Love

Joanna Griffiths, then-pregnant founder and CEO of direct-to-consumer underwear brand Knix, was told by potential investors that they were concerned that she might not be able to run a business while also raising children. So she raised $53 million in funding for her business, birthed twins, launched a brand—oh, and partnered with supermodel Ashley Graham (also pregnant with twins at the time) to create and release a 90-second video celebrating female strength called “Big. Strong. Woman.” Mike. Dropped.

“I had this ‘aha!’ moment where it really dawned on me that the narrative has been all wrong—that the world has traditionally been focused on big strong boys, but, actually, it was women who need to be big and strong to really overcome the set of obstacles and barriers that are put in our way from a very young age and through almost every single stage of life,” Griffiths told Adweek.

The concept for the “Big. Strong. Woman.” ad was born when Griffiths and Graham were each pregnant with twins and “navigating a world of expectations that are placed on female identities and bodies,” Griffiths said.

The ad features content from fans and celebrities, scenes from the women’s suffrage movement and the 2017 Women’s March on Washington, and even the women’s beach handball team from Norway that was fined for wearing shorts instead of bikini bottoms during the Euro 2021 tournament. The ad addresses “the common female experience of a world that does not create space for women to be big and strong.”

Graham has been an official brand ambassador since August 2021. She is both narrator and creative director of the video. “We have to be big and strong. Strong enough to love ourselves when the world is telling us not to… to raise your voice that wasn’t designed for you in the first place.”

This CEO isn’t letting gender bias get in her way 🙌 While pregnant with twins, Joanna Griffiths turned away every investor who questioned her ability to lead her company, @knixwear, during and after her pregnancy. pic.twitter.com/4lxblff4TZ

On her Instagram post where she shared the ad for the first time, she writes, “calling all big strong women 💪🏼 we are our biggest and strongest when we take up space, make noise, love, heal and do it all over again. I’m so excited to share this beautiful project i worked on with @knix to show the world what it really means to be a #bigstrongwoman.”

Poll Shows Tooth Fairy Is Dishing Out More Cash Than Ever