Don’t like what’s going on around you? Look up! With clear skies and an earlier setting sun, now’s as good a time as any to gather blankets and take the kids outside for a good night of stargazing and mastering astronomy. Don’t know where to start? Read on! 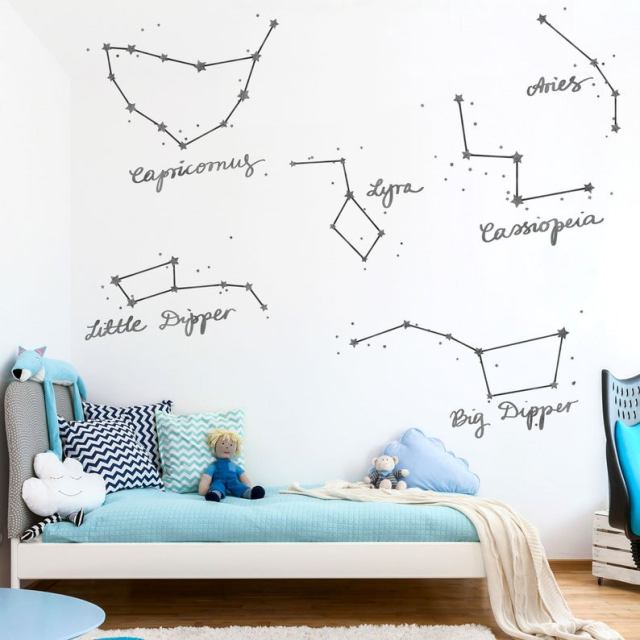 Sure, any kid will jump at the chance to stay up past bedtime with the family, but it's best to get your kids interested—or at least familiar with—the stars before heading out for a night of skywatching. Luckily, there are tons of books, games and gadgets out there to get them excited:

Bring the Stars Inside - Stick constellation stickers on your child’s ceiling to get her used to looking up and seeing those familiar shapes.

Make a Star Wheel - This activity works best for older kids (8 and up), but once they make it, kids will love being able to use this homemade tool to more easily navigate the night sky.

Read All about It - From A Hundred Trillion Billion Stars to A Little Kid's First Book of Space, there are plenty of books out there to get your kid primed for a night with the stars. Check out these great suggestions from Space.com.

Make Crafts - If you're the crafty type, your kids can get some planetary know-how with this cute space mobile from Honeybear Lane.

Play Space-Themed Games - Planet-themed Bingo, anyone? Play Dough to Plato has free BINGO cards that even preschoolers can enjoy. (Note: You'll have to submit your e-mail address, but the download appears immediately).

Watch Storytime From Space - This may be the coolest thing ever: Astronauts read stories from the International Space Station. Sure, your kiddo may be too preoccupied with watching the astronaut's hair floating in the no-gravity environment, but that's OK; They'll be space-crazed by story's end. 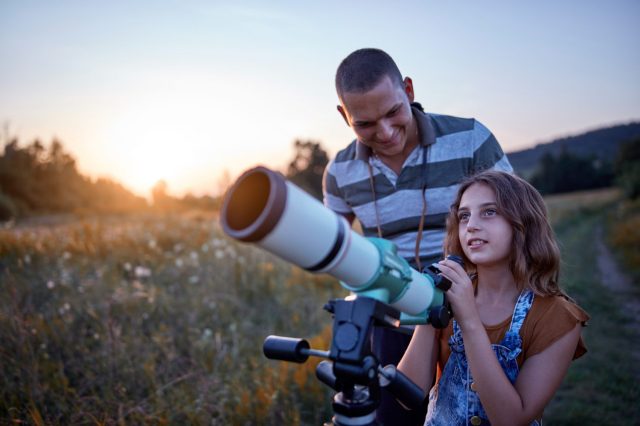 It might seem like plopping down on the grass and simply looking up would be enough—and it is if all you want is a few minutes of stargazing—but rounding up the right supplies for a night of sky-watching is essential to making your evening easy and fun. Little stargazers can get hungry, antsy and uncomfortable, so it's best to be prepared! Here what you'll need:

A large (preferably waterproof) blanket - Sitting directly on the ground may be scratchy and uncomfortable (not to mention you're exposing yourself to any creepy-crawlies that might be lingering below), so make sure to bring a comfy surface for the littles to lay on. Waterproof blankets help, in case the grass is wet.

Folding chairs - If you'd rather lounge than lay on a blanket, folding chairs make for comfy outdoor digs. Try to find chairs that recline, so you're not left with a stiff neck afterward.

Pillows - Laying down is, after all, the best way to get a full view of the sky, so bring along pillows to make things extra cozy!

Snacks - Little bellies need constant attention! Bring finger foods and snacks that the kids (and you!) can munch on while gazing skyward. It's best to stick to dry snacks so you won't get sticky fingers on that brand new set of binoculars.

A Flashlight - If you're in a particularly dark spot (which is better for seeing stars), you should bring a flashlight in case you need to read a sky map, find the snacks or get your bearings. Of course, a phone works just fine, too.

Bug Spray - When the sun goes down, the bugs come out—so be prepared. For bug protection that will last the longest, the American Academy of Pediatrics recommends that kids over age two use an insect repellent containing (a maximum of 10%) Deet. For younger children and babies, use products containing Picardin, an odorless chemical safe for babies as young as two months; or natural products containing citronella, lemongrass, peppermint, and cedarwood (note: these usually need to be applied more frequently to be effective).

Star Apps - Easy apps like Night Sky or Skyview are great for finding the constellations, even when the sky conditions aren't ideal. Just hold your phone up and you'll get an AR, up-close look the constellations, satellites and planets in real-time.

S'mores - A strong recommendation from our writer's eight-year-old. Here's where you can find our favorite s'mores recipes. 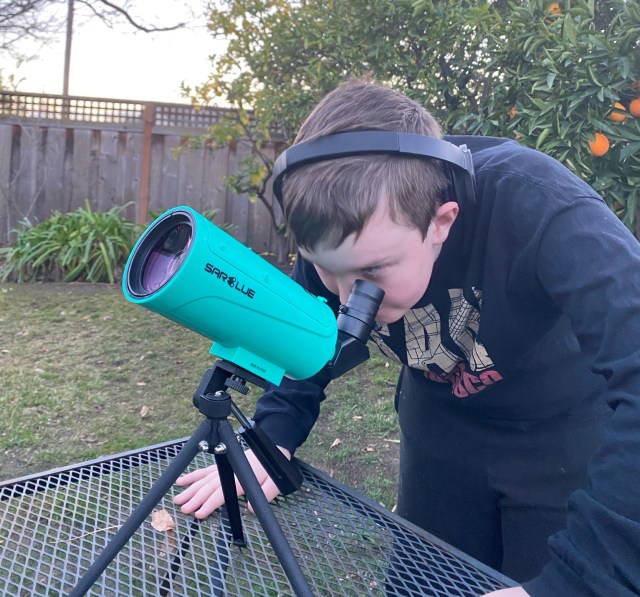 Get Set Up with an Easy-to-Use Telescope or Binoculars

Seeing the constellations with the naked eye is fun—but it's always cooler if your kids can get a closer look. Telescopes (and binoculars, which can surprisingly offer just as good a view) are a perfect accessory to any stargazing outing.

Telescopes: There's nothing that dampens the excitement of a stargazing night than an overly complicated telescope that you're worried about the kids destroying. For stargazing with kids, we like the Maksutov-Cassegrain Telescope for it's ease of assembly, ease of use and integration with your cellphone. Bonus, it's $109 price tag is not too shabby. This video shows all the steps needed to get your telescope set up. When we tried it out, we found that older kids could set it up easily including focusing and attaching their cellphones so they could take photos. The telescope can also be used in the daytime for birdwatching and other activities.

Binoculars: For binoculars, look for a pair that's 7x50 (the most popular size for skywatching). Both of these tools will not only get you a view of the moon's craters but may also snag you a glimpse of Saturn's rings and Jupiter's belts. 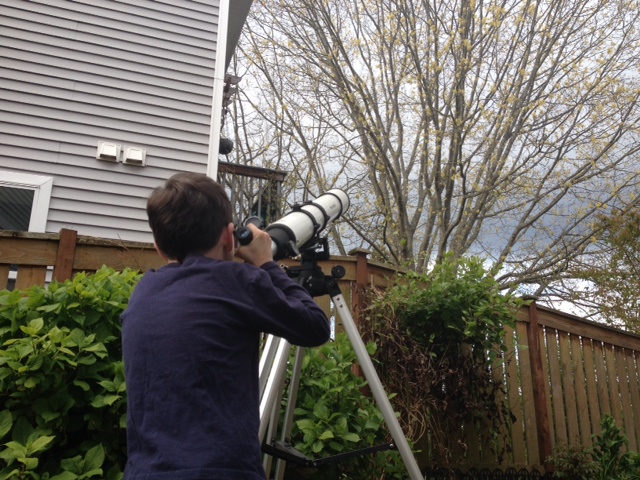 Figure Out Where You'll Go

The darker the sky, the more you'll see—so it's best to get out of busy towns and cities if possible. Consider yourself lucky if you live near one of Fodor's 10 Best Stargazing Sites in the United States, but really, any spot away from light pollution will work. State parks are usually good, safe spots to visit. Believe it or not, there's an interactive online map of "dark sky places" to help you find the best spot to stargaze.

Of course, if you can't get out of your back yard, that's fine; you can usually see a scattering of stars (and the moon)—and that's a start.

Note: Wherever you go, make sure to give it time. Stargazing experts say it takes your eyes 20-30 minutes to completely adjust to the dark. 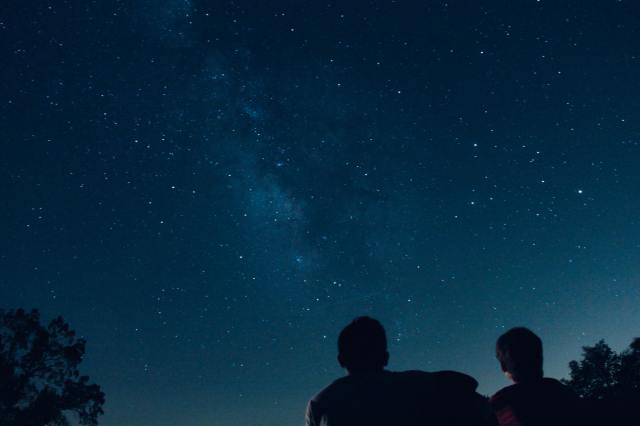 Check the Sky Forecast - While most kids are keen to get outside on any given night, not all evenings are ideal for stargazing. Check your local forecast to see when the skies will be clear. If you want to be uber-informed, you can check out Cleardarksky.com, which publishes "astronomers forecasts" to help people find the clearest, darkest sky reports for locations all around the country (It's a bit tough to read, but once you get the hang of it, you'll be able to find the best location near you to go, plus the best time to do it.).

Pick Your Night - To find specific space events in the Southern and Northern Hemisphere, check out SpaceWeather.com, which has up-to-date forecasts. Heavens-above.com will tell you when you'll be able to spot the International Space Station—as well as other bright satellites—at your location. You can download a super-cool free map of this month's night sky at Skymaps.com (Even if your kids don't understand it, the fact that it's an actual MAP OF SPACE should make it extra-cool.).

If You Can ... Look for a Meteor Shower - There's something about those sudden streaks of light ... they make you feel lucky just for seeing them. So try to schedule your stargazing outing for a night when shooting stars are in the forecast. The Perseids Meteor Shower, which takes place every year from Jul. 24 - Aug. 24, is the best night show of the year, with up to 100 shooting stars per hour during the shower's peak, Aug. 11-13.  Be sure to explain to your little astronomers that meteors aren't really "stars" at all—they're big chunks of space debris (bits of broken comets and asteroids) colliding with our Earth's atmosphere. For a list of other notable meteor showers, check out Space.com. 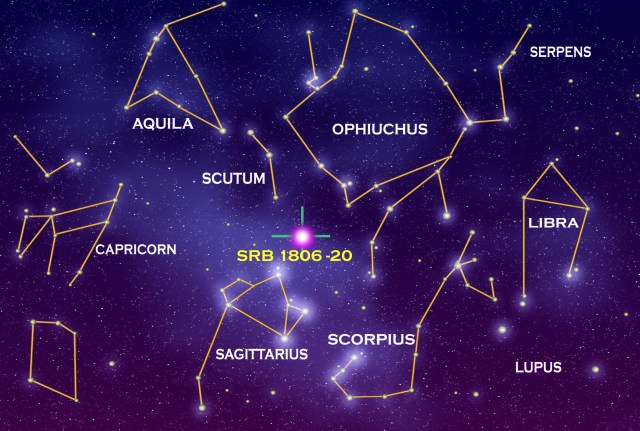 So, you're outside. It's dark. You're looking up. Now what?

The first thing to explore is the moon. After all, it's Earth's best celestial buddy, and it's big enough to see without binoculars. Ask your kids if they can see the lighter splotches on the moon—then explain to them that those are the moon's mountain ranges and highlands, which are filled with humongous, city-sized craters.

Then, find the visible planets: Mercury, Venus, Mars, Jupiter, and Saturn. To tell them apart, look at the colors: Jupiter is the brightest, Saturn is usually golden-yellow; and Mars is light orange-red. For a more detailed guide on finding what's visible in the sky week-to-week (because it changes!), check out Skyandtelescope.org.

After that, start looking for the constellations, which can vary in visibility depending on the season. For help finding these, NPR published an easy, animated how-to guide. The simplest ones to find are:

Keep an eye out for man-made space inhabitants like the International Space Station and large satellites, both of which appear as small, moving stars. 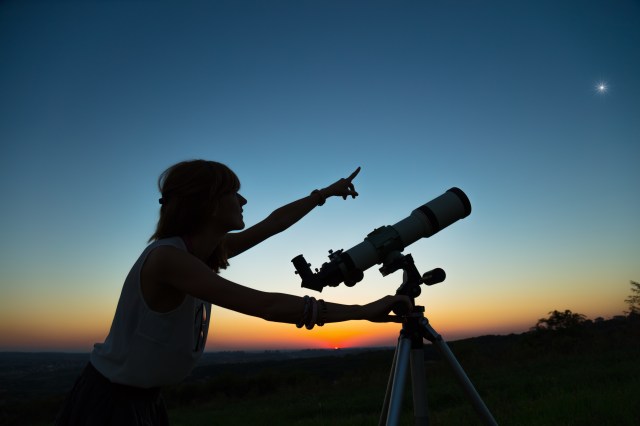 Tell Your Kids These Amazing Facts about the Sky!

Don't know what to talk about with your kids while you're watching the stars? How about some of these amazing facts about space?

- There are approximately 200-400 billion stars in our Milky Way Galaxy alone.

- Stars do not actually "twinkle." The twinkling appearance is only the Earth's atmosphere deflecting the light that reaches our eyes.

- When you're looking at a star, you're seeing something that's about 20 quadrillion miles away.

- There is no sound in space.

- Venus rotates so slowly that one day there is about a year on Earth time.

- There may be a planet made out of diamonds. According to research from Yale University, a rocky planet about 40 light-years away from us may have a surface made of graphite and diamond.

- Some scientists believe the moon may once have been a piece of Earth that tore off when an object smashed into our planet long, long ago.

Take a Virtual Field Trip from Your Living Room

Here’s How Your Kid Can Get An Astronaut Pen Pal 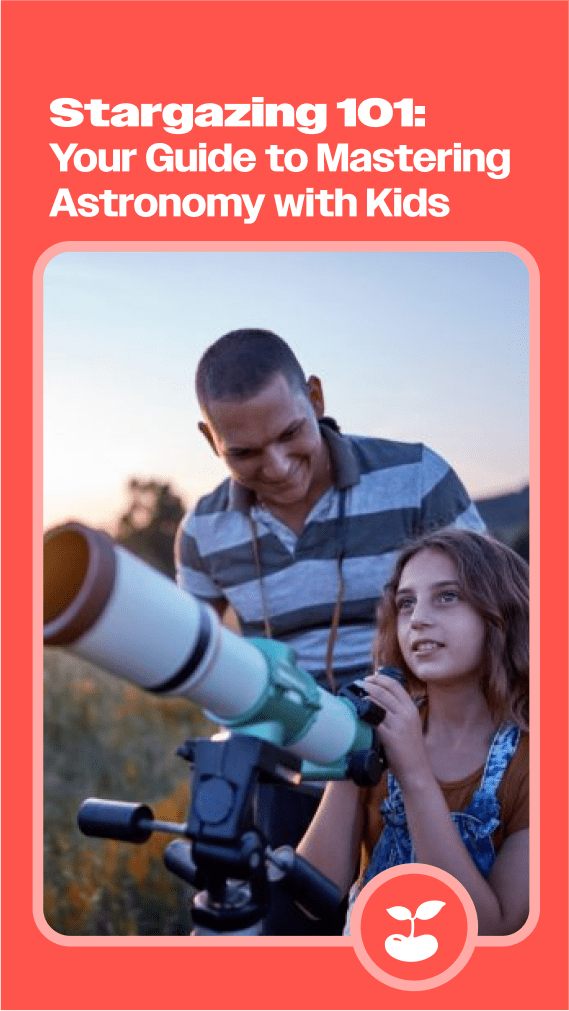