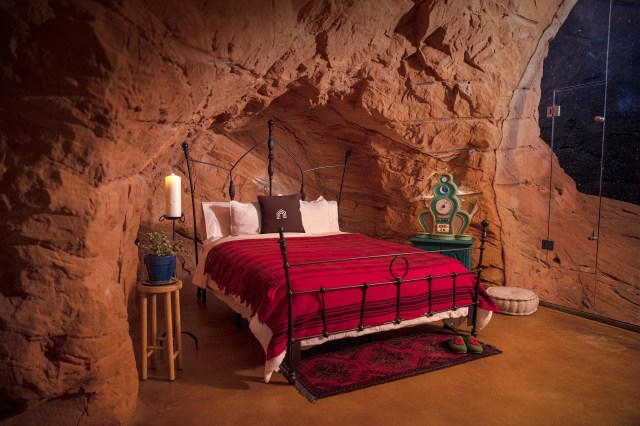 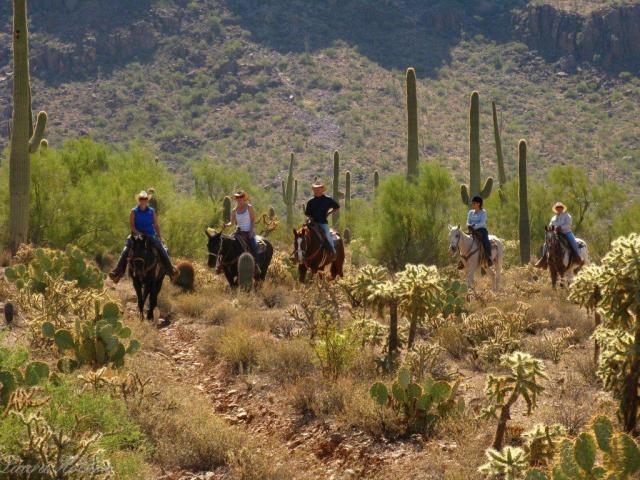 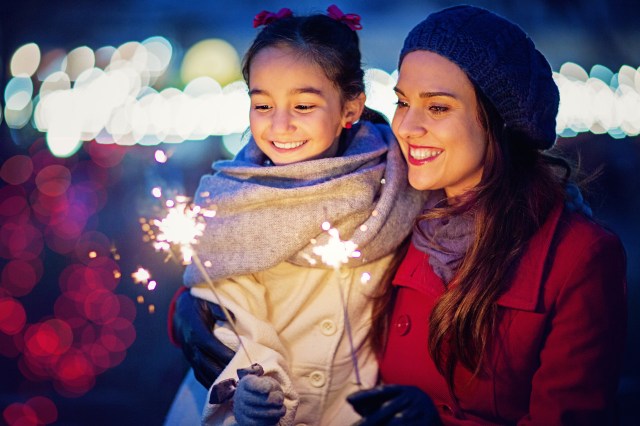 As you may have heard, the Museum of Ice Cream, which stormed Manhattan’s Meatpacking District (and Instagram) in the summer of 2016, has returned to New York City! This time, it’s to stay, at a three-story building in SoHo. The creation of CEO Maryelis Bunn and co-founder Manish Vora, The new Museum of Ice Cream features 13 new installations across 25,000 square feet, as well as a cafe serving up original ice cream creations and a MOIC gift shop. It’s bigger this time around, and we think, even more of a kid crowdpleaser. Scroll down to see the pics from our recent visit (warning: spoilers ahead). 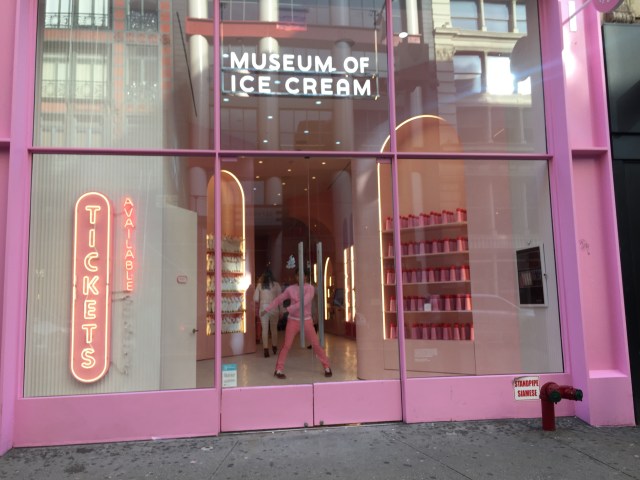 We All Scream for Ice Cream

The Museum of Ice Cream has returned, occupying a storefront at 558 Broadway. Unlike it's previous incarnation in the Meatpacking District, this one is here to stay. (It's right up the street from the slime-inspired Sloomoo Institute if you want to make a day of colorful interactive pop-up experiences.) It is, of course, a celebration of ice cream, but the themes of imagination, cooperation and just plain fun are woven throughout the colorful immersive rooms. 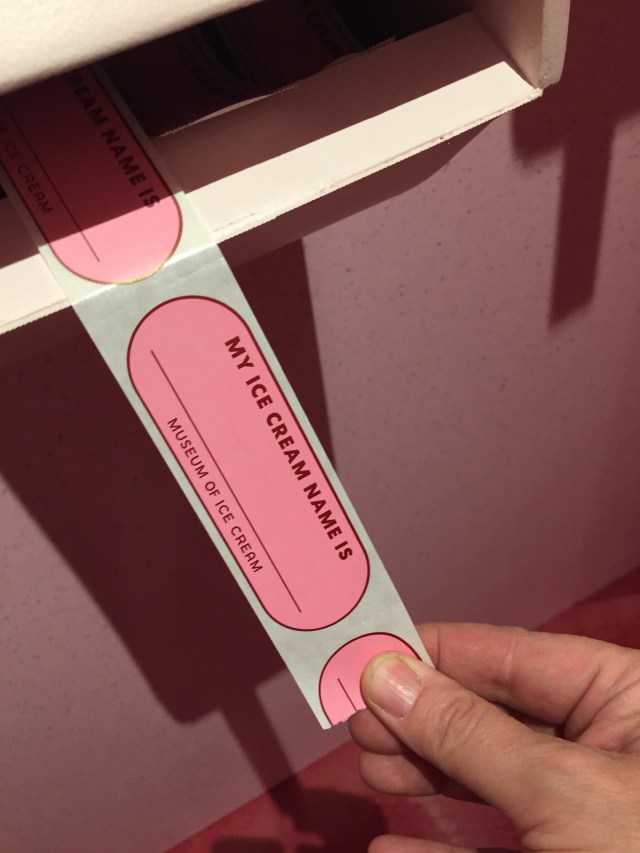 The first step of the experience is to pick an "ice cream name" and make a name tag. There are suggestions to get your creative juices flowing: "Demi Gelato", "Taylor Split", "Justin Freezer" etc. 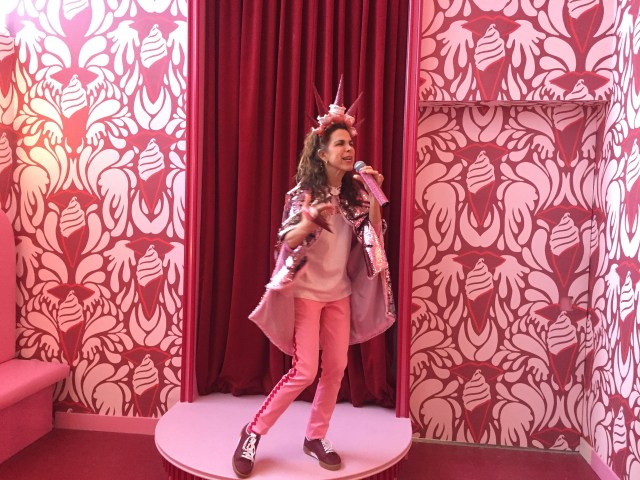 Friends Along the Way

Next up a wacky ice cream parlor of sorts, where ice cream baristas serve up a bowl with a sweet treat to get you started. Throughout the museum, you'll encounter assorted MOIC characters, like this lady, who did a bit of singing from her mini stage. (Thumbs up to the wallpaper here.) 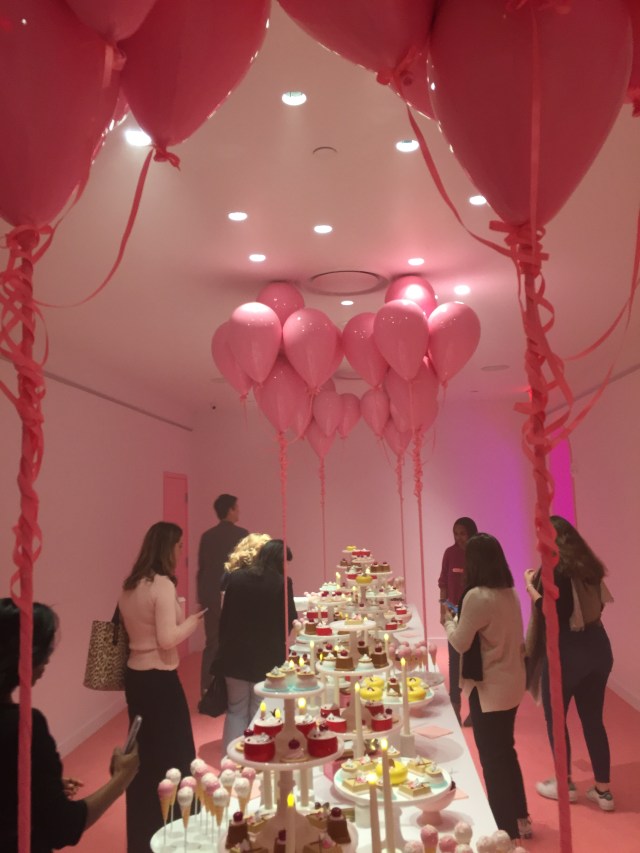 Dubbed "Oh Yah", this room is inspired by Alice in Wonderland. The table "floats" with the aid of pink balloons, and features a spread of delectable treats—only some of which you can eat. (But you are encouraged to do so!) 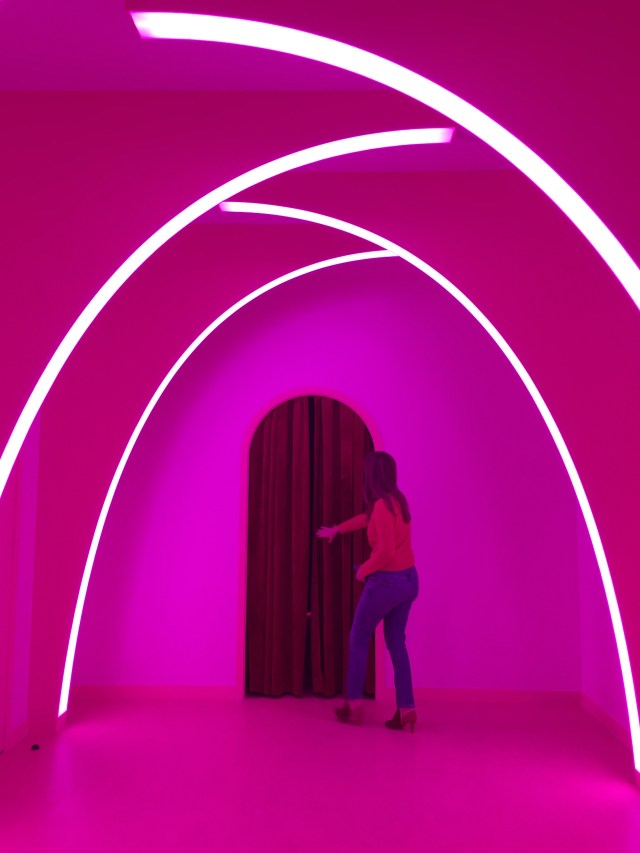 Next is the "Room of Rooms", with little surprises behind curtains and doors (including a very tiny little disco party!) 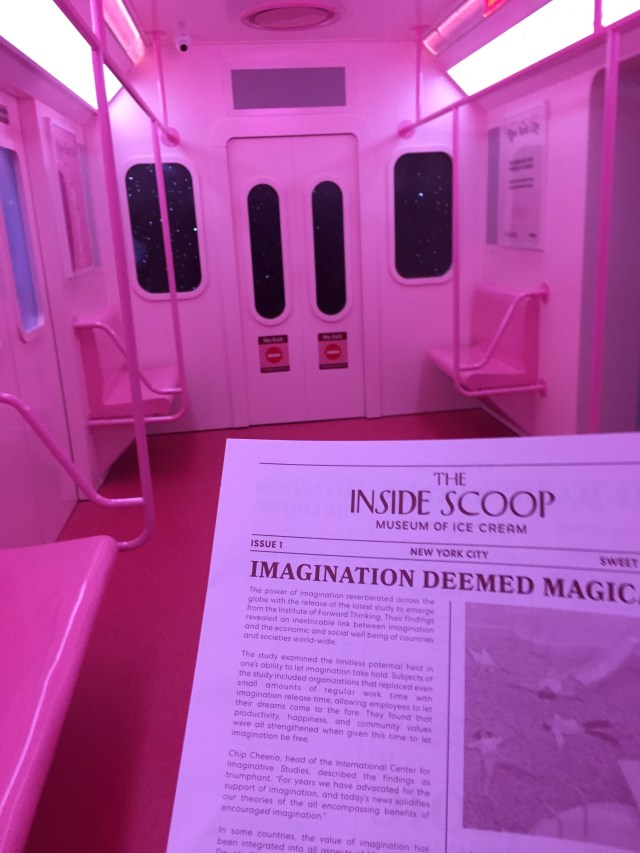 Then hop the train to "Starlem" on an interstellar "subway." (Be sure to grab "The Inside Scoop" newspaper from a box before you  board. The paper has some fun puzzles, recipes, an "ice cream scopes.") 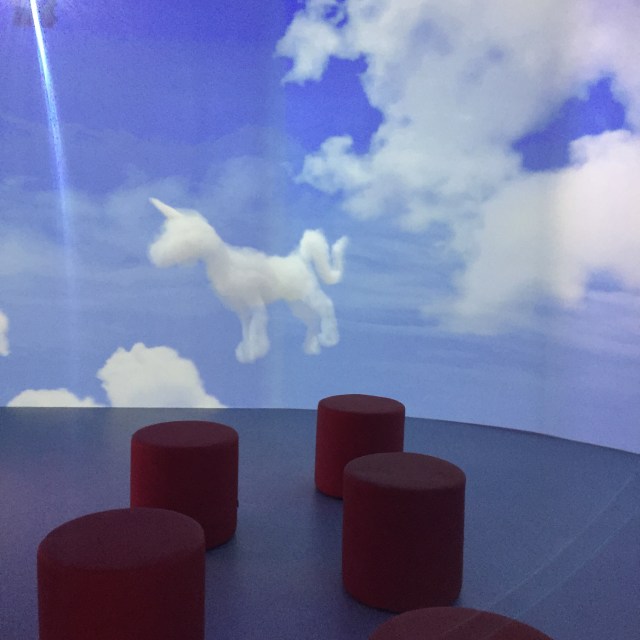 Exit the train and enter a soothing space with swirling clouds to gaze at. 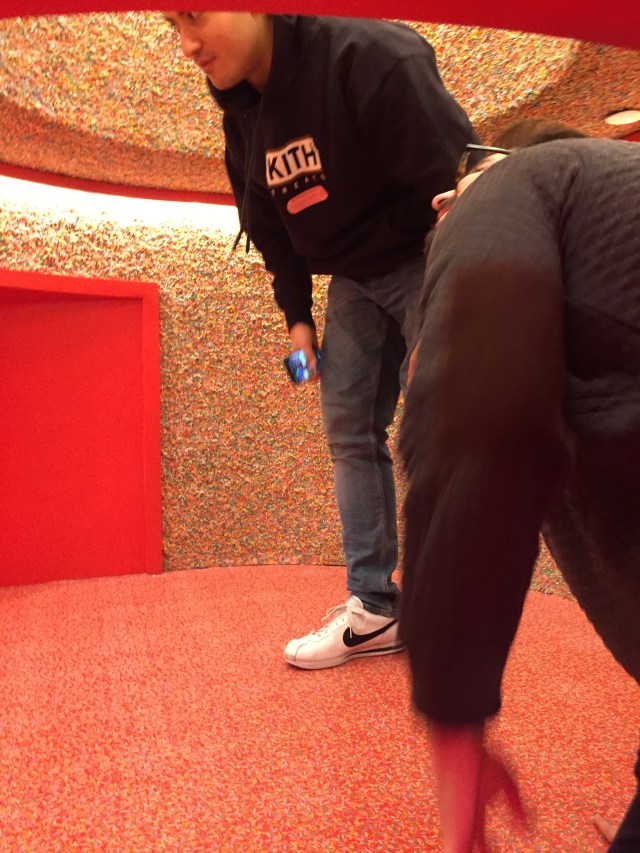 Pass an ombre banana installation (photos don't do it justice) and make your way to a "sprinkle cake" you can step inside of (kids will find this much easier than adults) and a mini pink bouncy house—also a real kid pleaser. 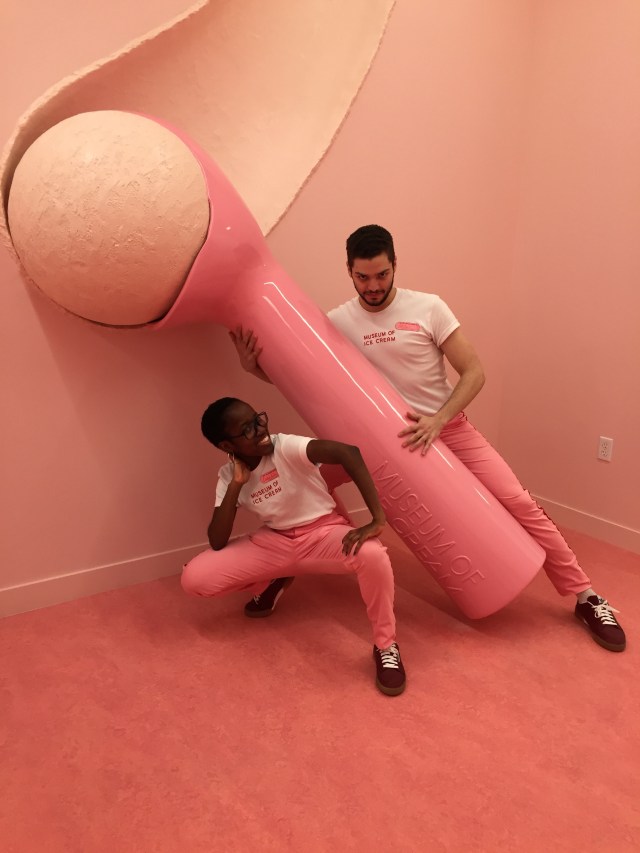 Stop for a Stretch

Pass through a room where you can spell out what you're grateful for (as well as other positive sentiments) on magnetized walls, and then stop for a taste of stretchy ice cream. 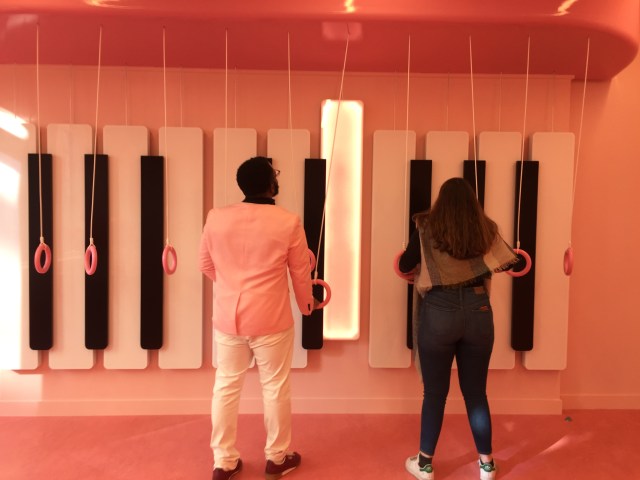 A music-themed room features huge keyboards that you can play by pulling ropes attached to the keys, as well as turntables for trying your hand at mixing some tunes. 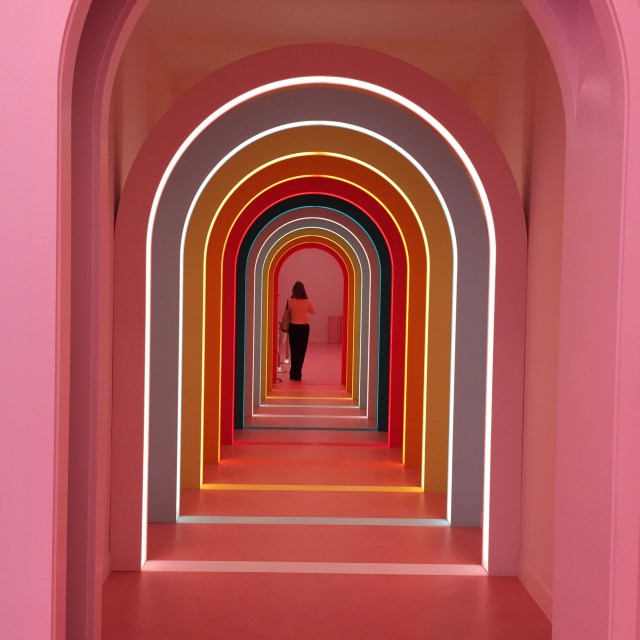 This rainbow hallway is incredible in person (and also makes for a nice photo op/selfie.) 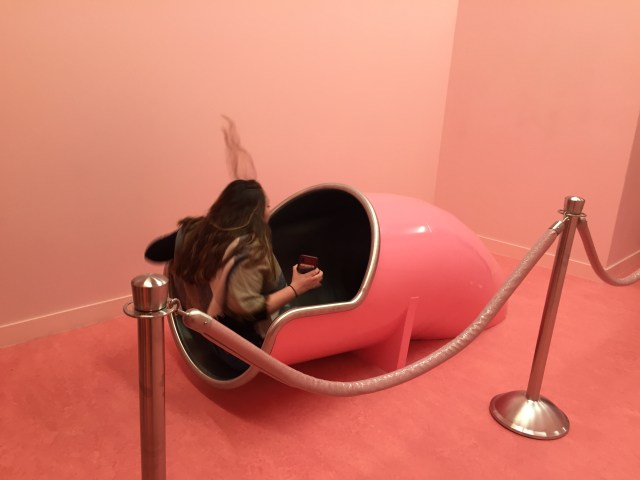 You can grab a sliding sack to get maximum speed down the spiral ice cream slide. (We went without and it was plenty fast!) You can also take an elevator to the next room if you're not feeling up for it. 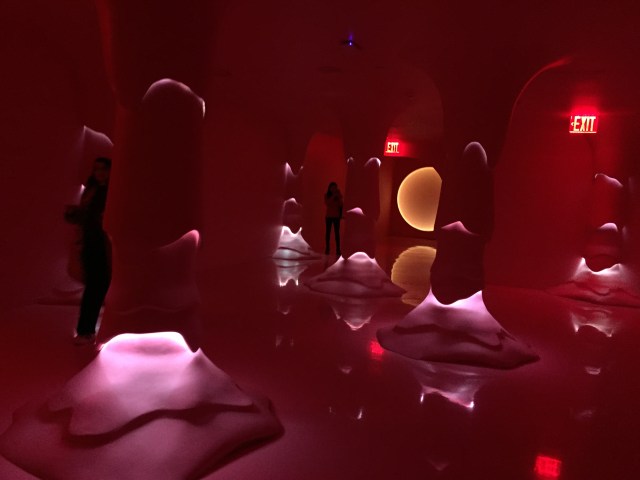 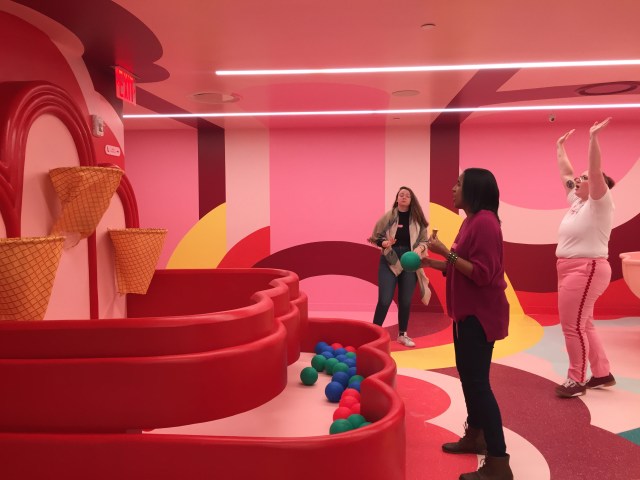 There's another original ice cream flavor to sample just off the dimly-lit cave, and then you head to a massive, colorful ice cream-themed playground. Swings, jungle gym structures, basketball with "ice cream cone" baskets and a sort of sandbox filled with faux ice cream cones. 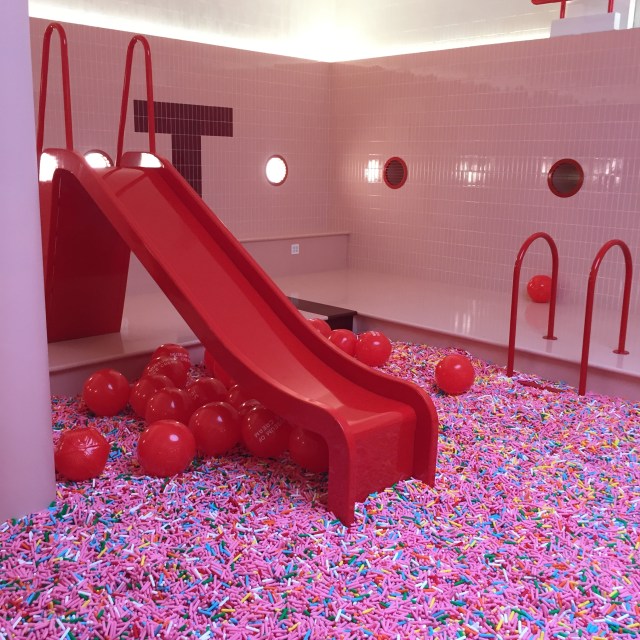 The grand finale, the Sprinkle Pool, is bigger, and is filled with larger sprinkles this time around. "Maraschino cherries" are cast about for extra sprinkle pool highjinks. 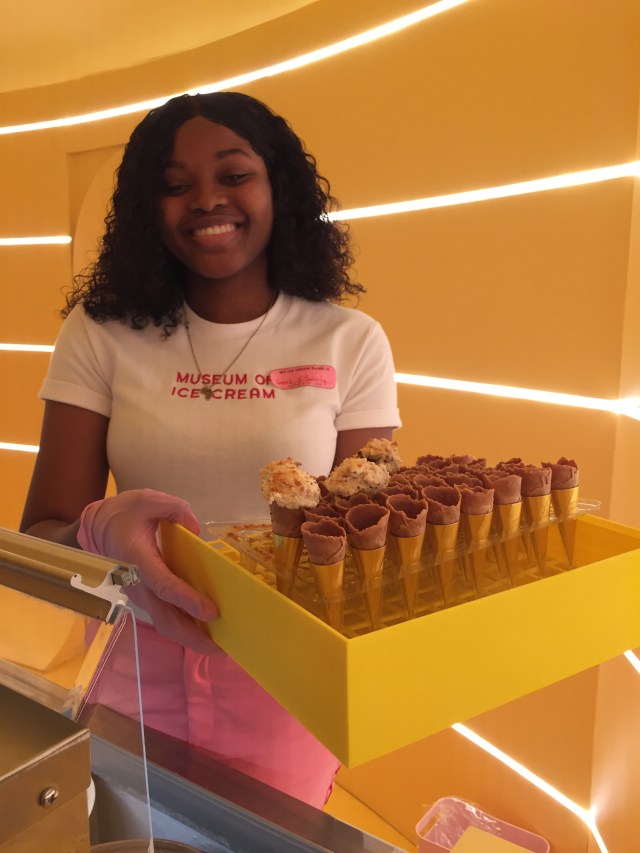 Tickets are $39 per person, and kids under two are free. You can get tickets at the door if they're available, but it's a good idea to buy your ticket online ahead of time. (They are sold in half-hour increments.) Estimate an hour to 90 minutes to navigate the whole thing.

Of course, there are plenty of Museum of Ice Cream-related products and gifts to snap up here, from branded water bottles and ice cream scoops to earrings, stuffed unicorns and glam accessories. (You can also buy pints of the custom-created flavors, which include Churro Churro, Pinata, and Queen Bee, the last of which, a honey-flavored treat being served here, is no doubt a nod to what is the inaugural MOIC's most famous visitors, Beyoncé—with Blue Ivy, of course.)

Boredom Busters: How To Keep the Kids Busy Over Winter Break

The Top Museum Exhibits for Kids This Winter