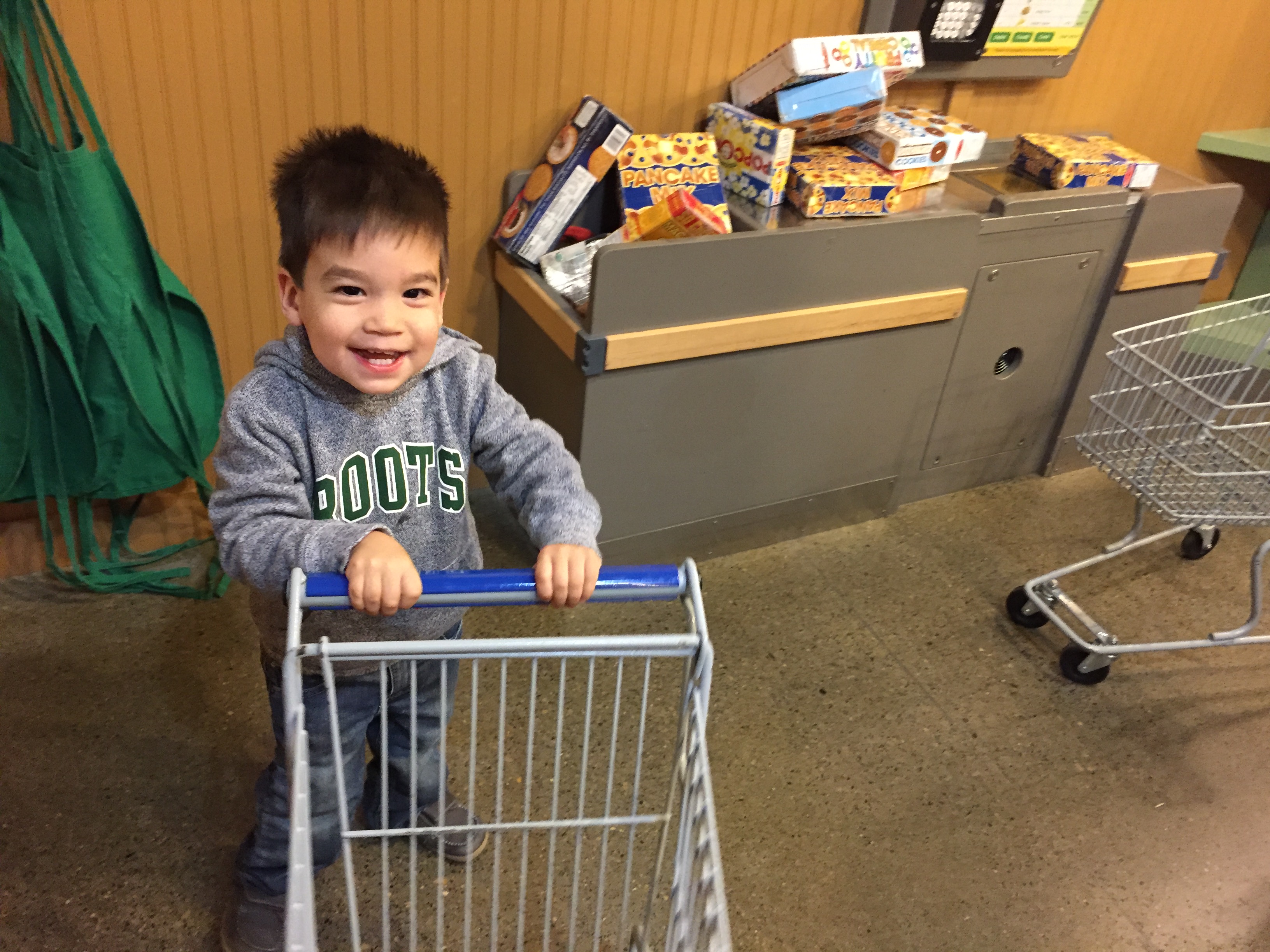 We really enjoy traveling with friends. After first discussing going on a whirlwind trip to New York City, we pared down to a road trip to Portland because there are a lot of fun things to do with toddlers. After much exploring online, we decided to book a suite through the Inn at Northrup Station. The photos online showed a very vibrant, boutique hotel and that’s what we got when we arrived. We also like that we got free tickets for the nearby streetcar, which our transportation-obsessed toddlers loved! They also had quite an extensive breakfast set-up and we had a kitchen in our room.

We left the Seattle-area (Renton) right at Owen’s nap time. This gave him a bit of time to look out the window, sing, and talk to us before he settled down and crashed. As he was winding down, my husband turned on the audiobook of Brooklyn which kept our interest, but helped soothe Owen into a deep sleep that lasted until we arrived in Portland.

The first meal we had was dinner at Apizza Scholls. Our friend from New York told us it’s the closest thing he’s found to New York pizza in the Pacific Northwest. It was absolutely delicious and the restaurant was very kid friendly. Our pizzas came out pretty quickly and they came by often to refill our water. They also take reservations, which is great for families! We will definitely be adding this place to our Portland food circuit.

Our friends arrived a few hours before us, so they grabbed donuts from Blue Star so we’d have them for dessert. They got one of everything, so we just cut them all in half. They were delicious and they still tasted great the next morning. I should know, I ate most of them for breakfast. The only strange one was Peanut Butter and Jelly, only because the jelly seemed to have hot peppers in it. My 2-year-old was not pleased.

We decided to let the toddlers dictate most of our activities for the weekend. We pared down our usual schedules to make sure the kids had lots of time to nap and take breaks. We had planned on going to the Oregon Zoo, but the weather report had said it was going to rain, so we opted to check out the Portland Children’s Museum, located in the same area.

​The Portland Children’s Museum was different than I expected. For starters, it wasn’t very colorful inside. I’m used to brightly colored walls and large artwork in children’s museums. The Portland Children’s Museum looks like a converted business, with stark walls and simple flooring. The vehicle room had a large table for trains (the tracks were loose, instead of screwed to the table), a ramp for cars and a simulated bus. It felt very bare and it was kind of confusing to find. But, the kids had fun playing with the cars and trains. They really enjoyed the grocery store area where they could put pretend food in baskets and check out at the cashier. Owen also really enjoyed the water table area and I was impressed that they and lots of tall hand dryers there to dry off wet kids. We didn’t get a chance to explore the outside area. From the website, I thought it would be similar to the Children’s Discovery Museum of San Jose, but it was completely different. The kids had fun, but at around $10/person, I’m not sure we got $30 worth of fun out of it. However, I did like the fact that you could bring your coffee into the museum.

After that, we headed to Shigezo. This Japanese restaurant was a good fit for our toddlers because they love noodles, edamame, and fried chicken. They offered half portions of their curry dishes, which would be the perfect size for children.

Then, the Dads stayed with the boys in the hotel for nap time while the Moms walked around Nob Hill to do some shopping. I ended up getting chocolates at Moonstruck and cake and macarons at Papa Haydn. We also stopped in Child’s Play toy store, which had an excellent assortment of toys and activities for babies, toddlers, and children.

When the kids woke up, we checked out the monthly Portland Night Market in the Industrial District. They have an entrance just for 21+ and they had a lot of bars. Most of the shops are indoors, which was nice on that chilly, rainy night. We found a cool Portland shirt for Owen and a fun sign that read “Readers are Leaders” for his book nook in his play room. Outside, they had lots of food vendors. Owen devoured half a plate of yakisoba noodles, several dumplings, and lots of strawberry ice cream. I had some fried chicken steamed buns that were tasty. It was nice that we could get several things to share, especially when our toddler changes his mind about food frequently. The only downside was a lack of seating, so it was kind of tricky to feed Owen while eating ourselves and huddled under a tent to avoid the rain. But, it was a fun place for dinner! This would be a fun date night while packing a baby in a carrier.

​Since we had promised the kids that we would ride a train, the next day my friend and I grabbed the boys and rode the Streetcar to Powell’s books. The ride was definitely a highlight for the boys and they wanted to keep riding it. We will definitely use the streetcar next time we’re in Portland, even just to ride around. Powell’s has a nice selection of books celebrating different cultures. I found a couple of books about Chinese folk stories and plenty of books about construction vehicles. The boys were a bit antsy, so we made it a quick trip.

Next, we hit up the Oregon Museum of Science and Industry (OMSI.) This is a legit museum! It reminded me a lot of Science World up in Vancouver, B.C. We weren’t sure how long the boys would last, so we decided to quickly look at a few of the exhibits and then head to their Science Playground children’s play area. The play area was fantastic! They had a large, enclosed sand pit with lots of activities for kids. They also had a nice water table area, infant area, musical instruments, books, a discovery lab and more . Owen spent the majority of time in the sand pit and then moved onto the vehicles and blocks. It would be easy to spend the whole day here. I love that they not only had 2 bathrooms inside the Science Playground, but they also had a nursing room.

After a couple of hours at OMSI, the boys were starting to fade, so we grabbed a quick lunch and hit the road. Owen told us his highlights of the weekend were eating pizza, playing with his friend and riding the street car. We will definitely be back to Portland soon and plan on doing the Oregon Zoo when their train is up and running this sumer!