Spring is winding down and summer is on its way. There’s no time like the present to get out and about and see great art. Did you know you can enjoy family-friendly art without spending a single cent all while enjoying fresh air? Portland is known for its next-level street art so we put together a list of murals and walls throughout the city that has some of the most inspiring art to be found. Read on for where to go on your Portland street art tour. 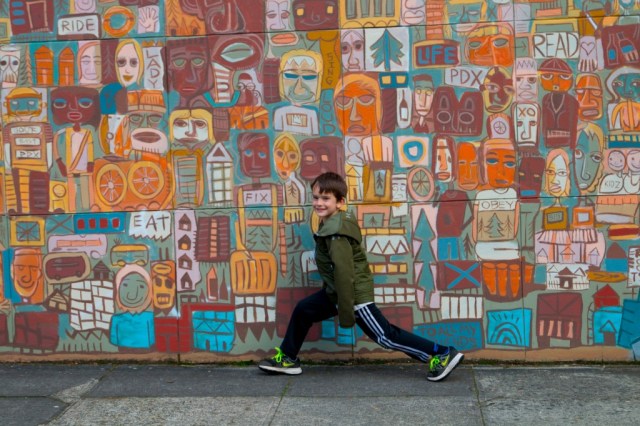 Located on the corner of SE Hawthorne and SE 49th on the Eagles Lodge, this beautiful mural represents the best of the area and is a dedication to the neighborhood and community. It includes representations of historical figures and mythical figures that are said to have shaped SE Portland. Look closely and you will catch a glimpse of the individuals you see roaming the neighborhood. Artist, Chris Haberman painted this piece in 2012/2013 and your littles will love standing among the neighborhood folk while you capture an image of them hanging out in this vibrant depiction of their beloved hometown. 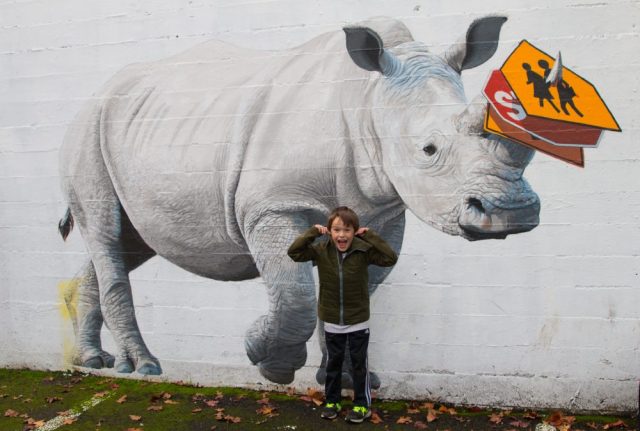 Located on SE Morrison street just east of SE 12 outside of There Be Monsters, this life-like mural is a community favorite. It was painted in August of 2015 by artists Josh Keys for the annual Forest For The Trees mural event. Your little animal lovers will love leaning on this friendly looking beast and the resulting photos will be unforgettable. 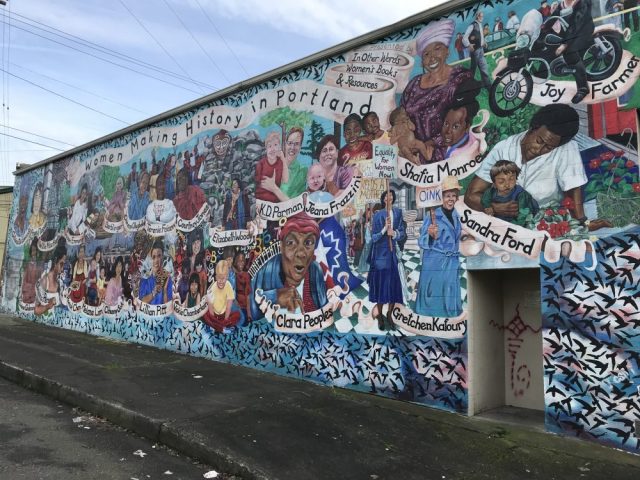 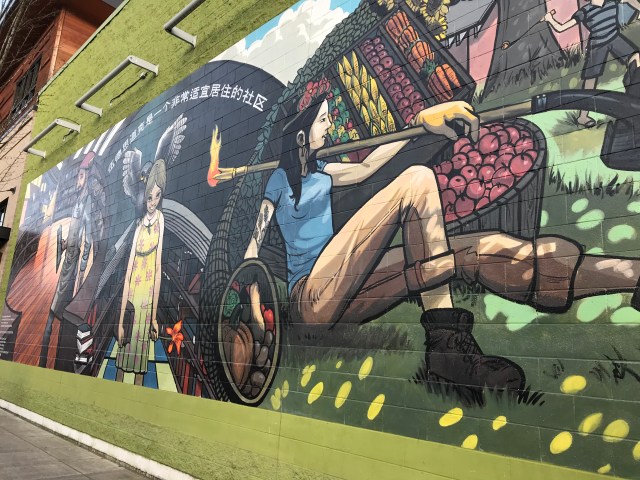 Commerce, education and the outdoors dominate this mural, which was relocated to the western wall of New Seasons in 2015. Look closely and you’ll also see various mythological symbols scattered throughout, including a winged hat, an olive branch necklace and a lotus staff. Behind the young student is the Woodstock motto translated into Mandarin, in honor of the elementary school’s immersion program. 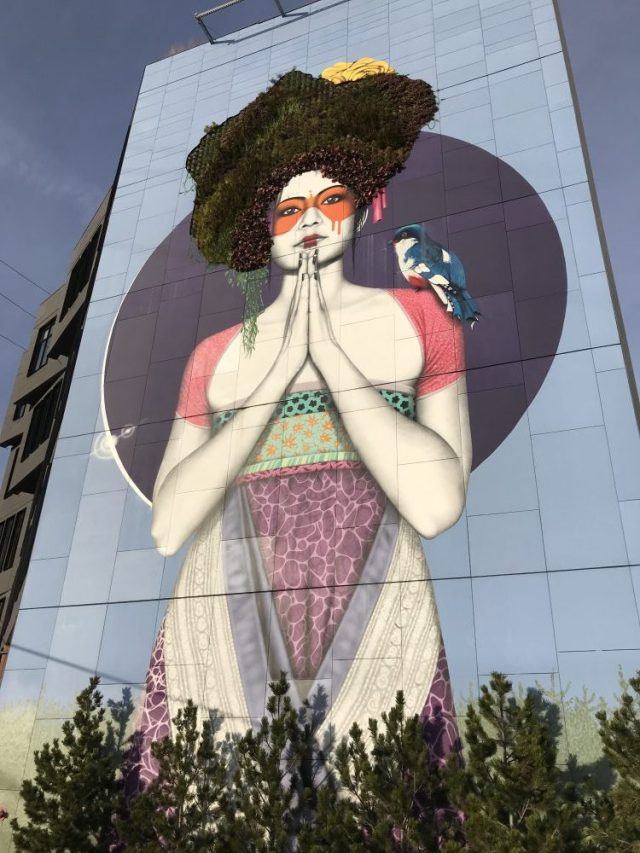 You’ll be hard pressed to find a more dynamic mural than the one SolTerra’s headquarters: a 70-foot tall woman, hands clasped in gratitude, with over one thousand living plants for her hair. Check back to see it flourish and change each season. 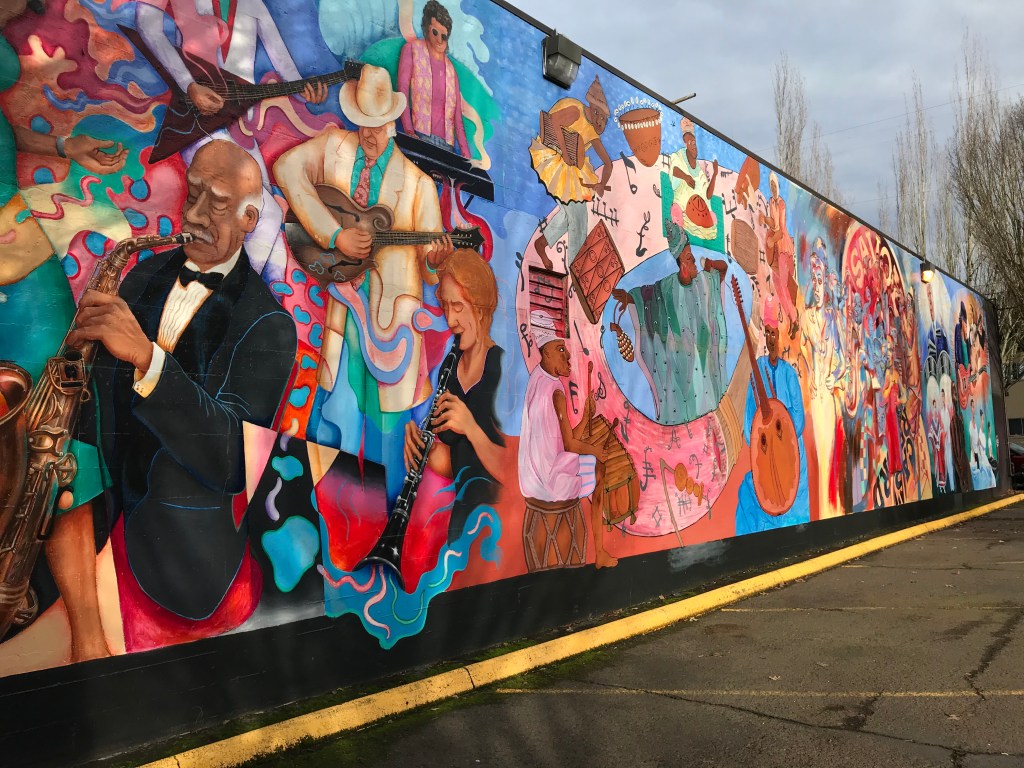 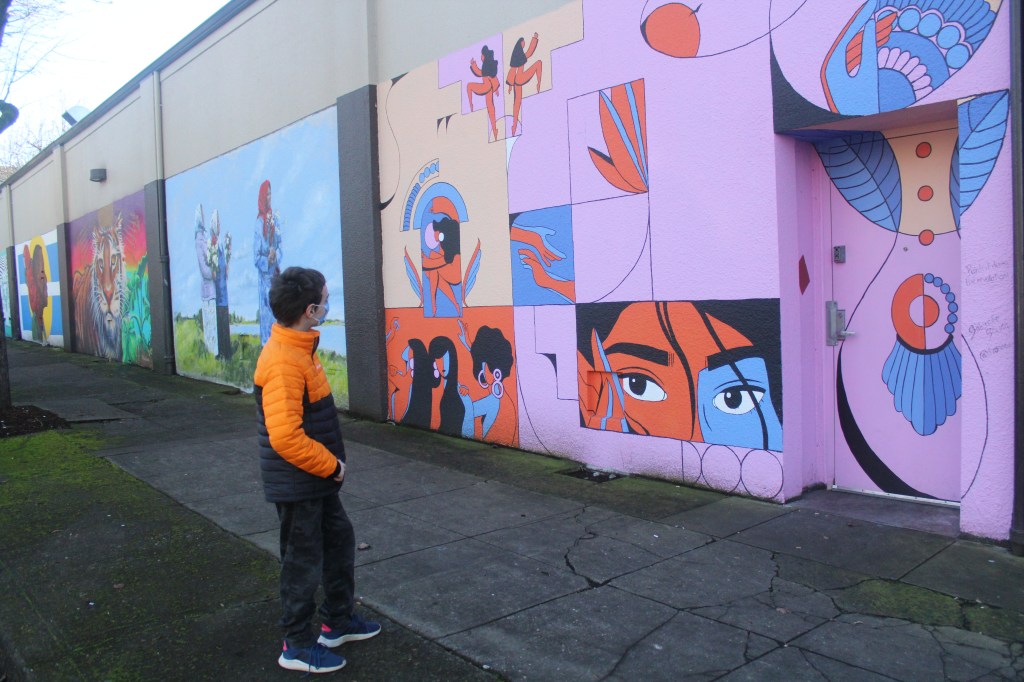 Morrison Place’s retail center is home to seven murals and counting. This ongoing, multi-artist project (also in collaboration with PSAA) only features works by local female-identifying artists and artists of color. Images range from a bold tiger to messages of unity. Look for the murals along S.E. Alder St. 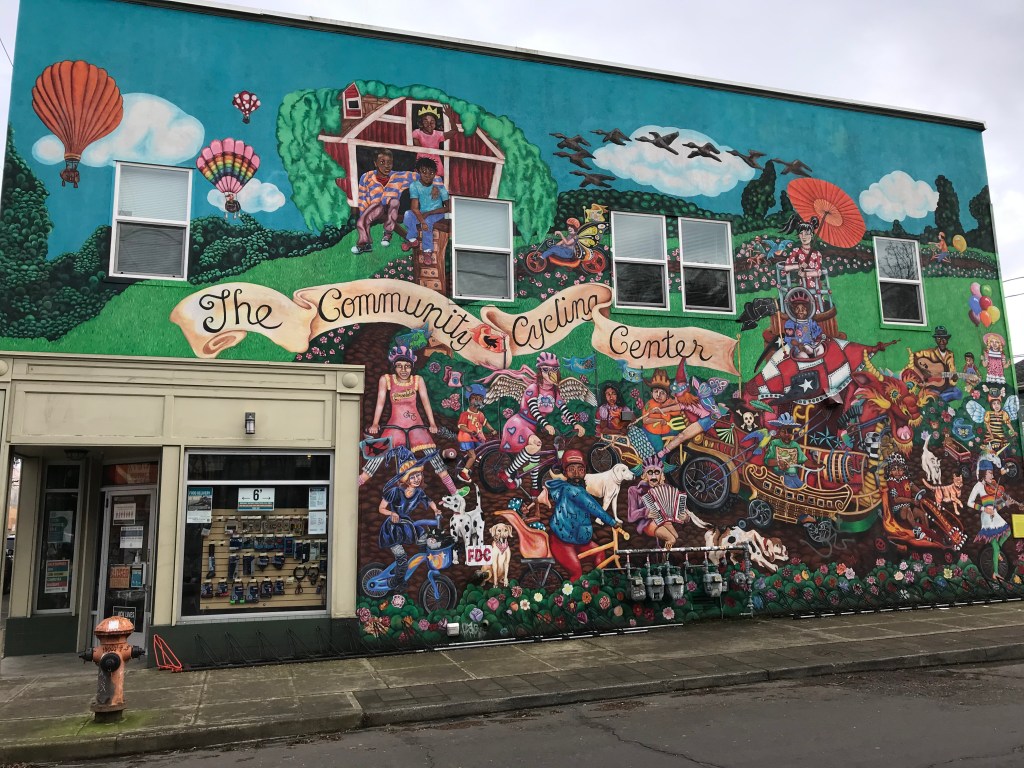 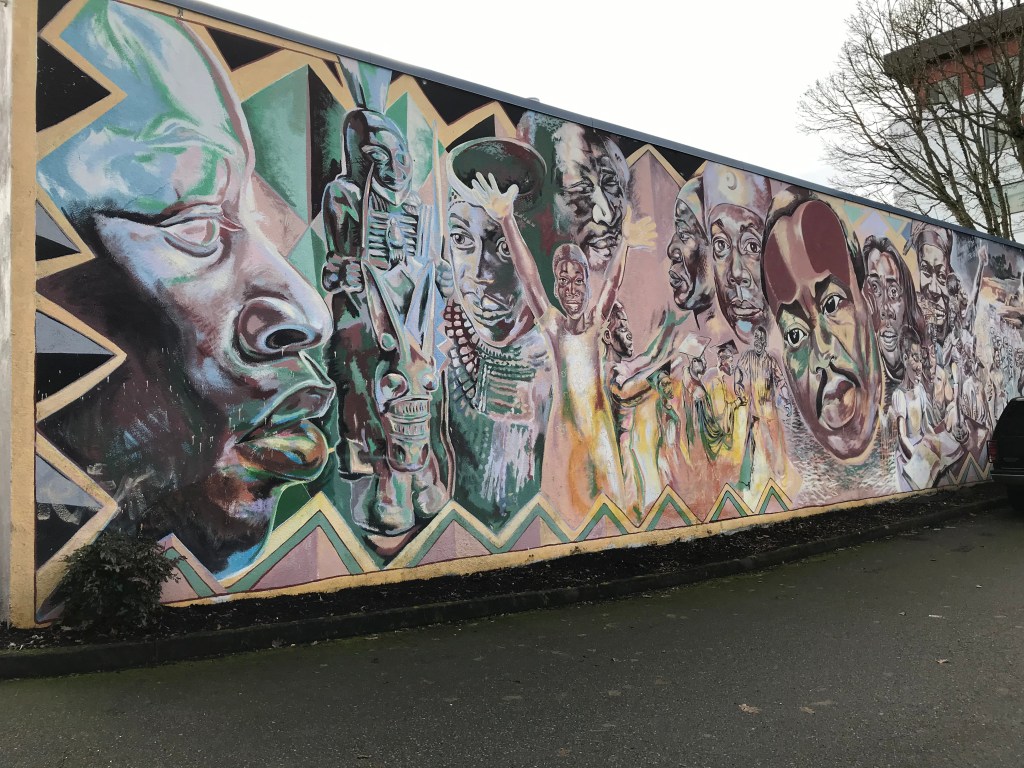 One of Portland’s oldest murals, its message of Black pride and empowerment is as important today as when it was painted in 1989. On the north wall of the Portland Covenant Church, Martin Luther King Jr. is surrounded by other notable faces, including Nelson and Winnie Mandela, South African playwright Selaelo Maredi and Muslim leader Elijah Muhammad. 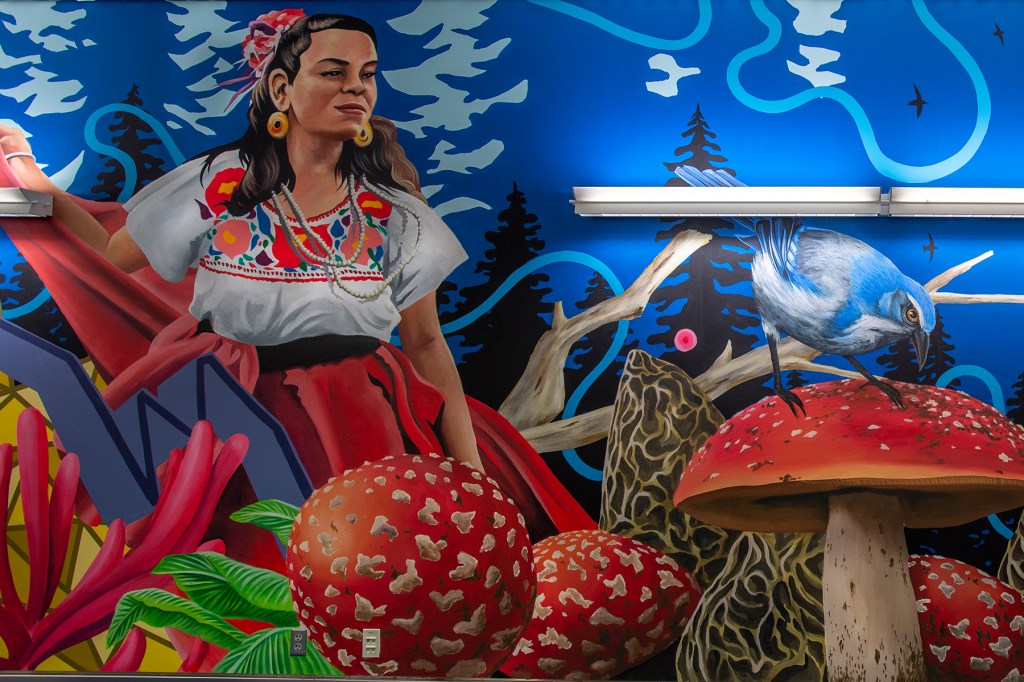 When airport travel is safe again, you won’t want to miss this sweeping 150-foot mural, located in Portland International Airport’s north pedestrian tunnel. All of what makes the Pacific Northwest great is on display here, from native peoples and natural wonders to farmers markets and local musicians.

Where to Eat Healthy with Kids in Portland