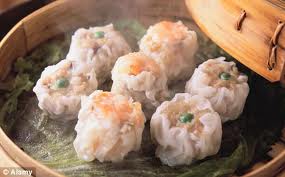 mysterious bamboo baskets, steamy or fried bites filled with tasteful meats or vegetables – dim sum are the epitome of fun kids food and kids just love to experiment with the seemingly endless possibilities coming out of dim sum restaurants’ kitchens. Because of the food’s inherent ethnic origin, dim sum navigating can be tricky – authentic hangouts trusted by the Bay Area Chinese community have menus in Cantonese, are real holes in the wall, or feature specials only the locals know about. Follow our guidance and trust your eyes and nose so you can discover the top dim sum restaurants in San Francisco and the Bay Area.

Koi Palace in Daly City has long been considered one of the best Chinese restaurants in the Bay Area for dim sum and seafood and the restaurant is always packed with families. On weekends, lines already form at 10:00 am so get there early to grab a line number. Kids can marvel at the live fish and seafood tanks or go visit the nearby PetCo while a parent stays in line.

In San Mateo, the Champagne Seafood Restaurant offers a relaxed dim sum experience in a clean environment and is a block away from Central Park, a San Mateo landmark home to a miniature train and Japanese garden.

For a solid higher-end first experience, Yank Sing offers delicious dim sum at both a sit-down restaurant and a to-go counter downtown, the latter a blessing before you hit the green lawns of Yerba Buena Gardens on a sunny day. Try the snow pea shoot dumplings or har gau dumplings (shrimp and bamboo shoots).

What about Chinatown? Seems obvious for Chinese food but finding a non-tourist trap is a real challenge. That’s why you can get the whole Chinese experience and good food if you head to City View Restaurant, a large family restaurant that locals swear by. The upside for families is that it’s just two blocks away from Portsmouth Square, a two-level square where grandparents watch kids play at the two playgrounds and chess players with their magnetic chess boards play the day away.

If you want to stray from the traditional Cantonese dim sum (and rolling carts), try the soup dumplings (xiao long bao) made to order at Bund Shanghai Restaurant, another reliable Chinatown address. The place is family-owned, clean and easy on the wallet.

Unless you speak Cantonese, you might find yourself a little lost at many Oakland Chinatown dim sum establishments—there are plenty to choose from, but not many that cater to families with tots querying, “what IS that?” We hear good things about Restaurant Peony (thanks for the reminder, Danielle), and Legendary Palace is a standby (as well as a Chinatown landmark). And for some of the best dim sum you’ll ever try, order from takeout-only, hole-in-the-wall Tao Yuen (816 Franklin St.) and head to the shores of Lake Merritt for a little picnic.

Now, Marin is not exactly the Hong Kong of the Bay Area but if you’re craving some dim sum and freshly made Chinese food, the House of Lee in San Rafael is where it’s at. Try the pork buns, they’re a staple. Harmony restaurant in Mill Valley takes it a step further with a focus on locally grown, organic, and free range, something you don’t typically think of when you’re craving dim sum, but once you’ve experienced it, there’s no going back.

Happy dim sum to you and before you head out, grab Amy Wilson Sanger’s Yum Yum Dim Sum at the closest book store or library to get familiar with the menu!