Spaghetti on Monday. Tacos on Tuesday. Stir fry on Wednesday. Every week. It’s easy (and, as any busy parent will tell you, completely excusable) to get caught in an uninspired dinner routine as predictable as the primetime TV schedule. Sometimes, it takes a little help from friends to pluck yourself out of regularly scheduled eating and change things up. While cooking with friends isn’t a new idea, it’s one that’s been gaining steam, thanks in part to the success of the Seattle-based Make-Ahead Mamas. 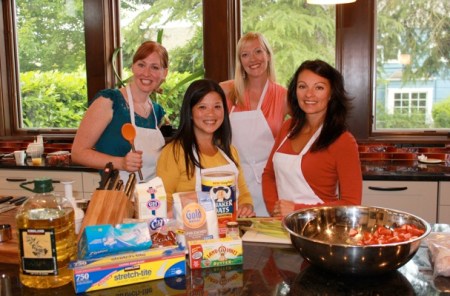 If your kitchen is either a setting for retro fantasies set to Def Leppard’s “Pour Some Sugar on Me” or a glorified utility room that churns out a predictable rotation of boxed mac and cheese, frozen pizza, and mom’s dreaded turkey casserole, it’s time to arrange an intervention. Enter the Seattle-based Make-Ahead Mamas.

What’s the deal with Make-Ahead Mamas?
The group of eight women (parenting a total of 18 kids) started meeting together five years ago in order to prepare fresh, freeze-ahead meals for the wallet-friendly price tag of $10 per dish. The moms were introduced while their children were enrolled in Wedgwood co-op preschool. They shared the desire to create healthier meal options to replace nights when overpriced takeout or pizza inevitably ended up on the table. After trying a meal preparation franchise that required using set ingredients and predetermined portion sizes, the moms decided to branch out on their own.

Soon, other parents started to take notes and ask questions. The Make-Ahead Mamas began to organize, creating a how-to guide and speaking at area venues. The moms also appeared on a web show produced by Allrecipes.com. Connecting via Facebook, groups of mothers have formed across the US, in states as far away as Florida and New York and countries including Saudi Arabia and the United Arab Emirates. A few dads are considering starting their own groups, too. 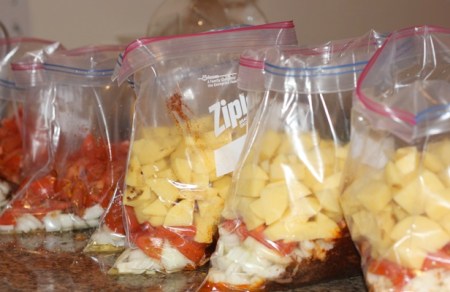 So…how does it work?
Once a group is formed, individual jobs (think grocery shopper, recipe selector, party planner) are decided and a meal plan is set. Members are encouraged to choose seasonal recipes that allow for grilling in the summer and crock pot or casserole meals in the winter. Shopping at farmers markets and sharing produce from backyard gardens is also common. Meal preparation lasts an average of four to six hours, from prep to clean-up.

A recent cooking party arranged by the original group of eight kicked off with snacks, including good cheese and crusty bread, a huge apple pie, and plenty of wine. Recipes were divided up among the group, and the women got cooking. The moms started measuring spices, labeling freezer bags, and chopping ginger. While some recipes are unanimous favorites (miso black cod and beef bulgogi top the list) the original group has also had a few misses over the years. For example, a recipe for tandoori prawns was went awry when shrimp were prepped and frozen in a marinade that, when reheated, turned them to mush. Luckily, problematic recipes have been few and far between. 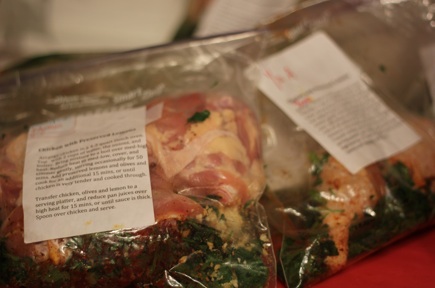 And, dare we admit, making dinner can be fun…
In addition to the tangible benefits of bringing home a freezer full of tasty meals, Make-Ahead Mama members talk about the advantages of cooking in a social setting. Instead of playdates that often only leave time to catch up, cooking parties allow for camaraderie and depthful conversations. A space to share meal preparation ideas and tips is also created, not to mention a chance to ask parenting questions and offer tips. One mom cited the benefits of introducing recipes to the group that were passed down from her mother and grandmother. She also talked about how good it is for her and her family to try foods that don’t normally make the dinner table rotation.

Interested in learning more about starting your own group? The Make-Ahead Mamas are scheduled to speak at the Mamacon conference at the Bellevue Hilton the weekend of May 18, 2012.