Snoop Dogg is delving into a brand new kind of entertainment: kids programming! Together with Claude Brooks and October London, the trio has announced the launch of a new animated kids series, Doggyland- Kids Songs & Nursery Rhymes.

The show combines award-winning creators whipping up original songs focusing on positive social and emotional development for kids from toddler age up to eight years old. Themes will cover everything from letters and numbers to diversity and inclusion with bright colors and lovable characters.

But let’s be honest––we’re all here for the Snoop.

“As a father, grandfather and longtime youth football coach, it’s always been important to me to build positive and educational environments for all children. We wanted to bring our show to YouTube and YouTube Kids which provides free access to everyone, so all the kids can enjoy it,” said Snoop Dogg, Co-Creator, Doggyland – Kids Songs & Nursery Rhymes. “I’ve always wanted to create a kid friendly series that lets kids be kids and is truly representative of the Culture with everything from the music to the characters. When I started to build my team, it was only right to partner with Claude, who created the iconic series, Hip Hop Harry, which built the blueprint to diverse kids programming, and October London, a talented singer and writer.” 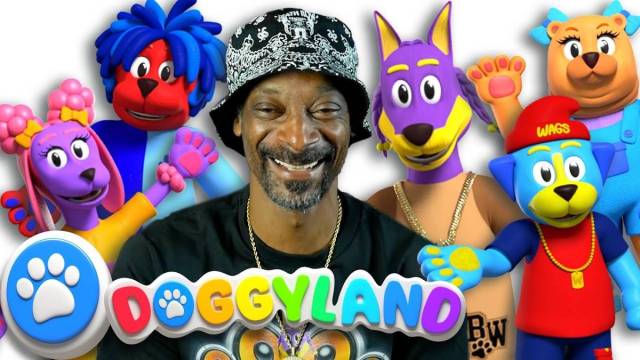 The bright cast of characters include Bow Wizzle (Snoop Dogg), a character acting as an adult mentor, Wags (October London), Yap Yap, Chow Wow, and Barks-A-Locks. There are already four episodes available to watch, with new content dropping on Tuesdays.

In addition to the show which is streaming on YouTube and YouTube Kids, fans can also grab the accompanying album! Doggyland – Kids Songs & Nursery Rhymes is streaming on multiple platforms and is completely free.

“Working with Snoop, you know our music has to be top notch and make all the kids and families get out of your seat and dance,” said October London, singer and songwriter. “While the Doggyland – Kids Songs & Nursery Rhymes show is created with kids as the priority, the whole family will want to watch it and bump it!”