Life with kids is a roller coaster anyway, so maybe that’s why we love family-friendly amusement parks and the thrills they provide. The following list includes theme parks and new rides we think every family should add to their bucket list. Scroll down to see what rides and attractions are on our own lists and the exciting sneak peek at what’s coming in 2018.

Disney unveiled its most surreal land yet in 2017, Pandora—The World of Avatar, a nature-rich world that challenges the imagination. Visitors join Alpha Centuri Expeditions (ACE) and set off through the Valley of Mo’ara, marveling at floating mountain, rhythmic drum beats and more. They find further adventures along the Na’vi River Journey when park-goers of all ages search for the Shaman of Songs in the bioluminescent rainforest. But the Avatar Flight of Passage is the real thrill because after all, it’s not every day a family gets to take a virtual 3D ride on the back of a mountain banshee.

Disney’s Tower of Terror got a major facelift in 2017 and became Guardians of the Galaxy: Mission—Breakout! just in time for Guardians of the Galaxy Vol. 2. Park visitors can experience the just-under-three-minute ride that still offers thrilling (and slightly terrifying) drops when they visit California Adventure, but now riders will wander through all kinds of Guardians artifacts as they make their way toward the gantry lift. There, they’ll find Rocket and his grand plan to recruit riders for his quest to save the Guardians. Set to the coolest soundtrack around, and boasting stellar screen appearances by your favorite characters, this ride needs to be on your must-ride list.

Volcano Bay erupted from the ocean’s depths in May of 2017 at Universal Orlando, and beach bums of all ages have been finding adventures there ever since. At the heart of Universal’s newest park is the Krakatau Volcano and Waturi Beach, which sits in its shadow, and provides families with hours of sandy beach time to beat the Florida heat. Krakatau’s Aqua Coaster is the place to start the day’s adventure, as it twists and turns canoes up through and eventually out of the gigantic volcano. Psst … don’t forget to grab a Tapu Tapu wristband to avoid long lines.

2017 brought the world of LEGO NINJAGO to Florida’s LEGOLAND resort, just in time for the movie premiere. It’s the place where ninjas-in-training go to practice their skills before taking on the Great Devourer on Ninjago, The Ride (the biggest thrill of the bunch). While honing their craft, kiddos can climb the rocks at Cole’s Rock Climb, test their reflexes at Jay’s Lighting Drill and try to stay balanced atop Kai’s Spinners. And of course, there are some awesome LEGO building opportunities, too. Ninja-go!

The County Fair area at Charlotte, North Carolina’s favorite amusement park got a hair-raising addition in 2017. Riders board the floorless gondola and get sent through a series of gravity-defying flips, turns, and spins that are as dizzying as your tot’s non-stop energy. It’s the experience fearless riders just can’t get enough of!

Valleyfair visitors have been jumping at the chance to ride the North Star since it opened this past summer. The tallest ride in the park, and the tallest ride of its kind in the upper Midwest, this towering swing ride stands 20 stories tall (that’s 230 feet!). 32 riders swing up to 40 m.p.h. suspended above the park, and boy do they get a view! Our favorite part? It becomes a glowing beacon of colorful lights once the sun goes down.

Early summer 2017 saw the arrival of the Lasso of Truth at Six Flags Discovery Kingdom.This pendulum-style ride swings back and forth at up to 70 m.p.h., while simultaneously rotating riders around Wonder Woman’s lasso loop. Its 40 riders experience the feeling of weightlessness and pay homage to their favorite star-spangled superhero each time they ride. As for height, expect to swing 15 stories high before gliding back down to earth to do it all over again.

Join 27 of your closest friends spinning 100-feet in the air on this newly installed adventure at World of Fun in Kansas City, Missouri. The two-seater gondolas swing, rock and rotate on one of six expansive arms, giving riders a thrill and a great view all at once.

Minnesotans can finally book a stay at the Great Wolf Lodge that just opened in Bloomington. This familiar water park mecca boasts dozens of wet and wild rides, like the Wolf Rider Wipeout—an indoor surf simulator—and Alberta Falls, a four-story tandem tube ride. Little cubs can chill out at the Cub Paw pool or explore Fort Makenzie’s slides, toys, and sprayers. Beyond the H2O, families will find characters, activities, and p.j. parties aplenty, all included in the booking price. It’s the perfect winter getaway for your pack!

Six Flags New England unveiled a roller coaster that’s almost as crazy as its namesake in early summer 2017. The Joker, a 4D, free-flying coaster uses magnetic tech to switch it up each time you ride. Expect free form flips and spins that go backward and forward once you make your way over the first 120-foot drop. Traveling at 38 m.p.h., it’s all over in less than a minute. Talk about a zany ride!

Make like your favorite Baywatch star and board San Antonio Sea World’s wildly fun 2017 addition, the Wave Breaker. You won’t be recusing stranded swimmers like David Hasselhoff, but instead, you and your Sea World Rescue Teammates (think: fellow riders) will set off on jet-ski roller coaster cars to save a sea animal in danger. It’s 2,600-feet of twisty-turvey track that runs over a lake and includes one seriously amazing 60-foot drop. Get on board!

Springtime at Hersheypark brought one sweet new choose-your-own-adventure ride to the park. How does it work? Riders choose from one of three G-force inducing tower drops. They can start out sweet and simple with the Hershey’s Kiss Tower (Looming 80 feet above the park, this ride is just right for younger riders.). The mama bear sized ride, Reese’s Tower, is 131 feet tall, and then there’s the papa bear ride, Hershey’s Tower, which at 189-feet overhead, it plunges riders up and down at over 45 m.p.h.

Plan a visit to Andy’s backyard at Disney’s Hollywood Studios in the summer of 2018. Fans will find beloved characters like Buzz, Woody and others wandering the park. In addition to totally tricked out shops and eateries that dwarf park patrons, there’ll be plenty of rides to enjoy. You’ll find old favorite Toy Story Mania! alongside the new Slinky Dog Dash—a riveting roller coaster—and the Alien Swirling Saucers will blast riders into outer space on a dizzying swing-style ride. Who’s with us?

Families in and around the Dallas/Fort Worth, Texas area are counting down the days until Epic Waters Indoor Waterpark opens mid-January 2018, where they’ll be able to take the plunge on one of nine waterslide or body surf waves on the outdoor wave pool. Add in a lazy river, a play area for tots and plenty of goodies all under a retractable roof and you’ve got a year-round playground no matter what Mother Nature has in store.

The Six Flags Great America in Chicago’s northern suburbs is set to break amusement park records when the world’s largest loop coaster opens in 2018. Six inversions and record hang time will push riders to the G-Force limit on the 100-foot tall roller coaster. The best part? Riders are seated facing each other so you can find out just how brave your seatmates are!

2018 will see the dawn of 360-degree thrills at Valleyfair outside Minneapolis, MN when Delirious makes it first run. It’s a seven-story, 70-foot coaster that loops the loop over and over and over again (10 revolutions!) until riders can’t quite tell what’s up and what’s down. Visitors will find it in the refurbed Route 76 area of the park.

Adding to the already amazing 11-acre water park at Hersheypark will be two new rides, set to open in 2018. Breaker’s Edge will be the park’s first hydroMAGNETIC water coaster, featuring four-person in-line rafts and hair-raising flying saucer turns. The Whitecap Racers mat-racing slides will be the longest in the world when the ride opens this summer. Expect two sets of looping tunnels and six lanes so you and your sidekick can engage in a little head-to-head competition while you’re there.

Indoor Waterparks That’ll Save Your Winter

The Best Amusement Parks for the Whole Family

Which park do you want to visit? Is there a ride you can’t wait to try? Share your picks in a comment. 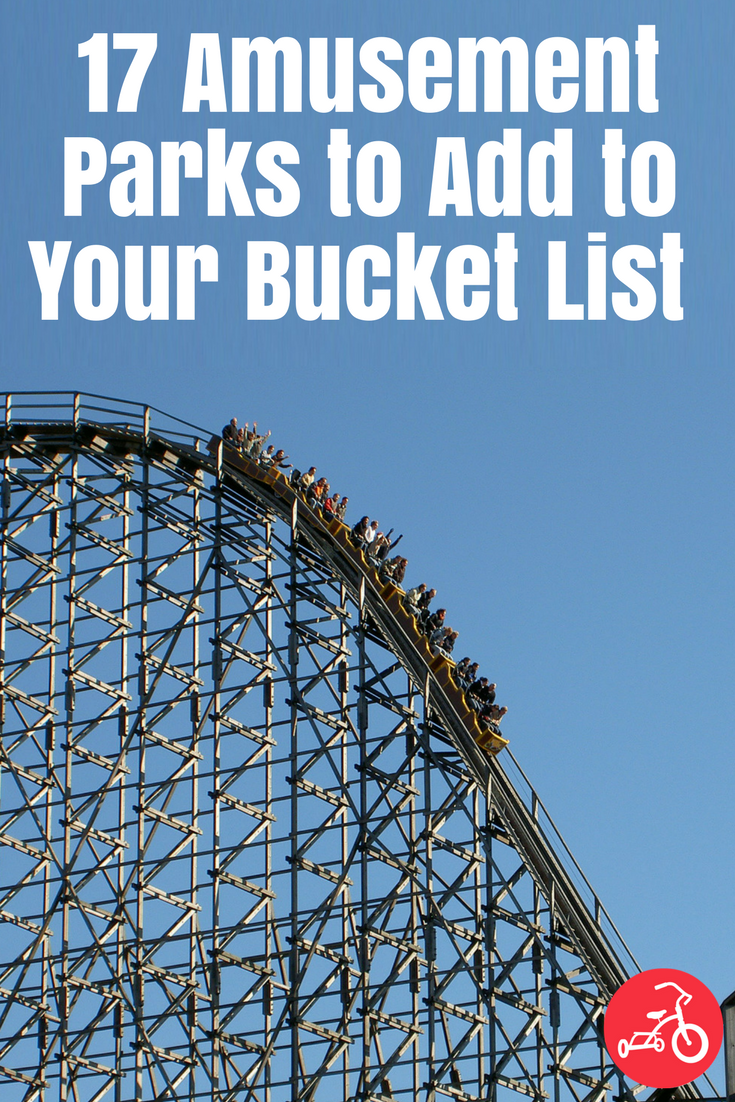