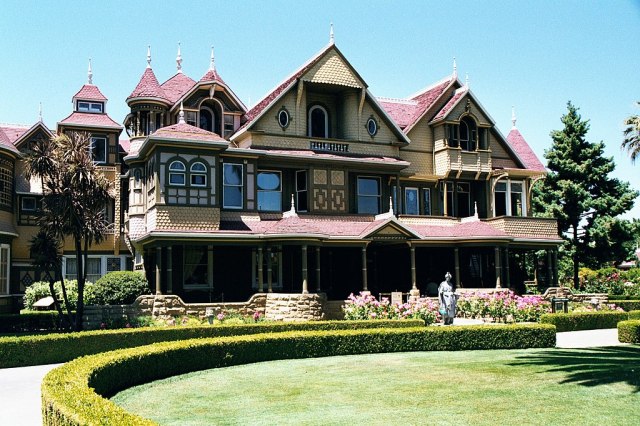 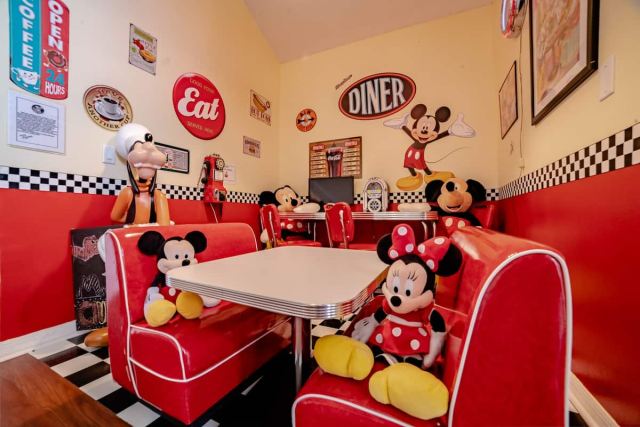 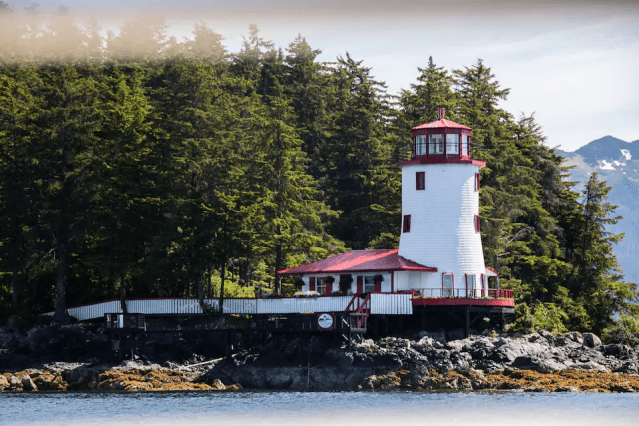 12 Gorgeous Lighthouses You Can Rent with Your Crew 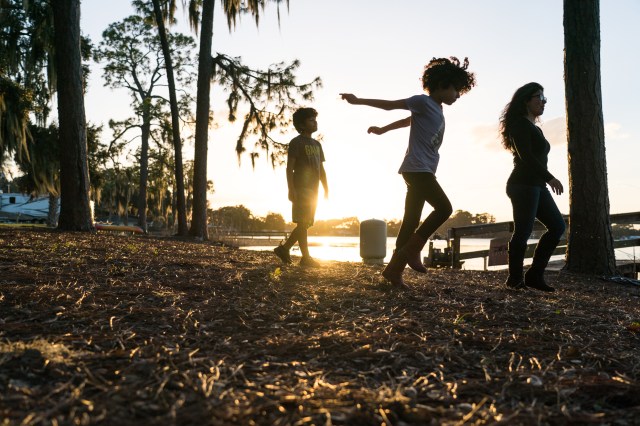 The Must-Have Packing List for a Family RV Trip 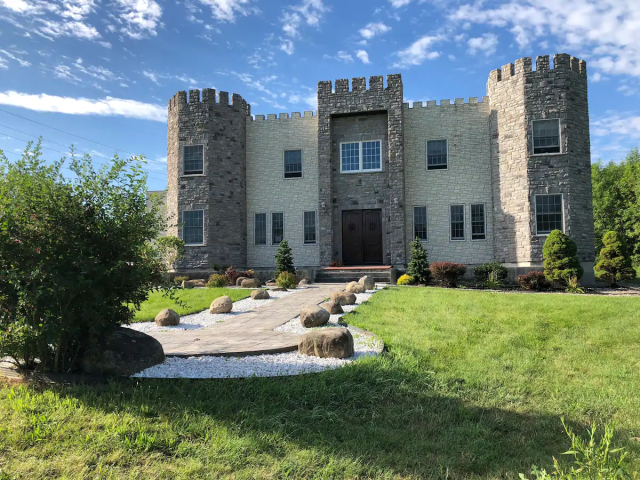 There are over 600 roller coasters operating in amusement parks across the country right now, and everyone has their own criteria on what makes one the best. Wooden or steel? Sitting or standing? Fastest or longest? We decided to do something a bit different for our list of bests. We broke down our huge list of contenders and picked something for everyone. Here you’ll find the best roller coasters for everyone from the tiniest tot to the oldest grandpa—scroll down to see them all. 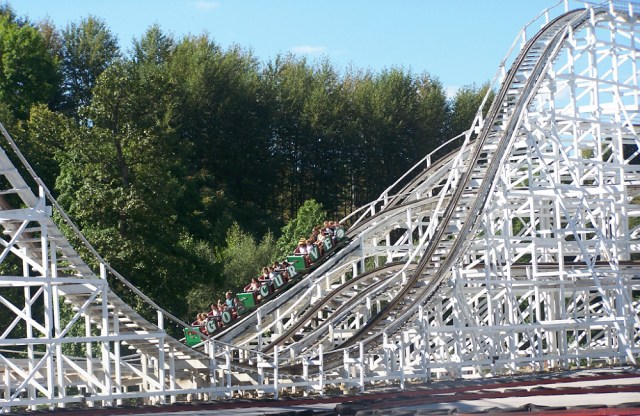 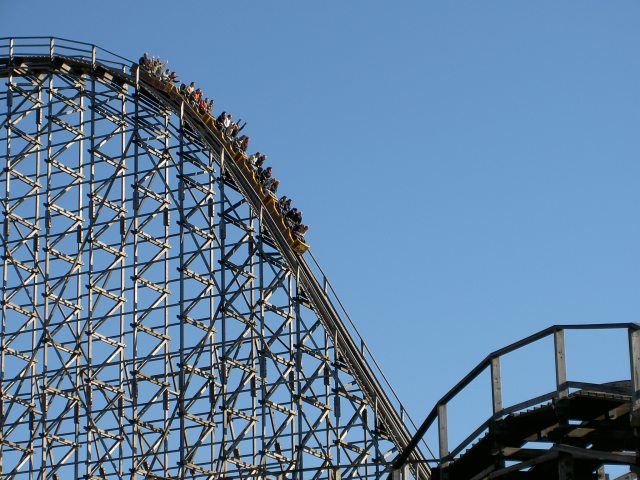 One of the best wooden roller coasters is also one of the newest. The Lightning Rod can be found at Dollywood amusement park in Pigeon Forge, TN, and is the world’s first launched wooden coaster. Based on a tricked out 1950’s hot rod, Lightning Rod launches its riders from zero to 45 mph while traveling up 20 stories in the sky. It is estimated that riders will experience 20 seconds of airtime. This ride also takes advantage of the hill upon which it rests giving the ride a whole new look as well. Note: Guests with casts above the elbow or hard casts on legs are not permitted to ride. 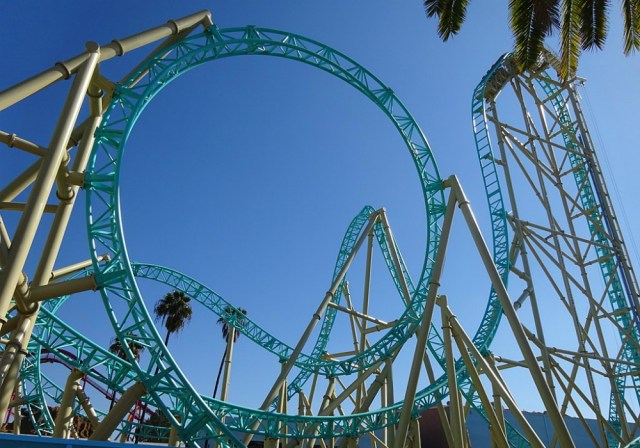 There was a time when Knott’s Berry Farm in Buena Park CA most exciting attraction was the Timber Mountain Log Ride. That was a long time ago. While that ride is still going strong, fast forward 49 years to the opening of the park’s newest adventure, Hang Time. The surfing themed coaster, which replaced the Boomerang, stops its guests at the top of the 150-foot-tall hill at a 60-degree angle for “hang time” giving the illusion that the track has disappeared before sending them down 2,189 feet of steel track. 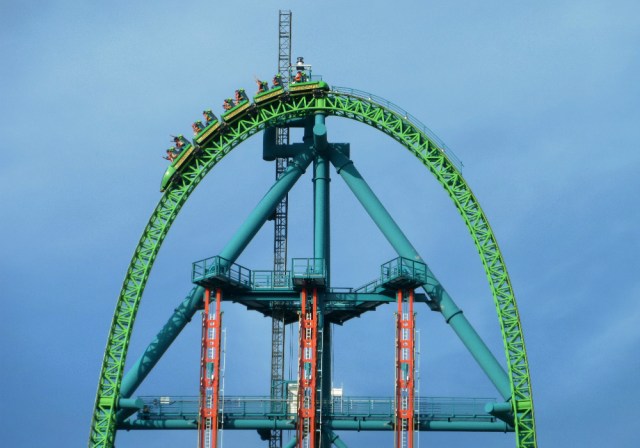 For an insane ride, hop aboard the Kingda Ka roller coaster found at Six Flags Great Adventure in Jackson, NJ. This is the fastest and tallest roller coaster in North America. The upside down u-shaped track shoots cars up 45 stories in the air, going from 0-128 mph in just 3.5 seconds. Once you arrive at the top, you’ll be shot back down in a 270-degree spiral which the theme park says “is not recommended for wimps.” At just 28 seconds, this ride is almost over before it starts! 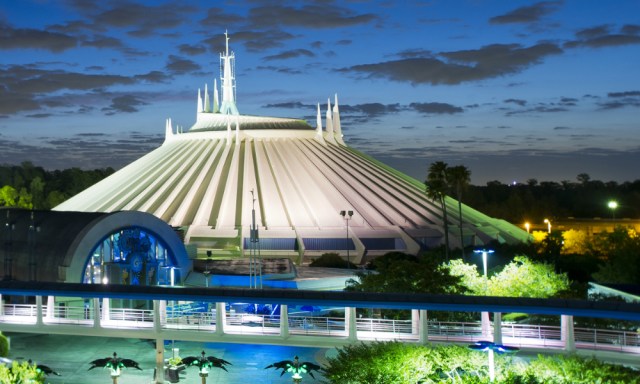 While both American versions of this ride are great, it’s the Orlando, FL version at Walt Disney World’s Magic Kingdom that gets the nod for superior ride and if it’s been awhile since you’ve visited the park, you’ll be surprised by some of its changes. While Space Mountain is one the of shortest and slowest on our list, its thrills come from the fact that riders are hurtled through “space” in almost complete darkness making the ride seem faster and scarier than it really is. What really sells this ride is its theming including interactive “training” before your flight, robot controllers and the music played in your vehicle as you ride. 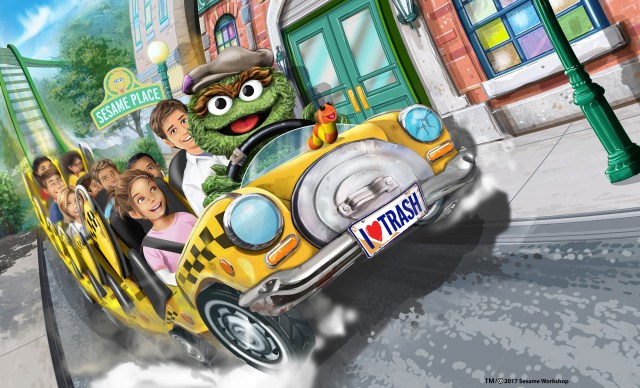 Younger kids ready for a "big kid ride" will love this family-friendly coaster just opened at Sesame Place in Langhorne, PA. Oscar's Wacky Taxi is a wooden-steel hybrid coaster driven by the green grouch himself takes riders down an exhilarating (but not too high!) 40-foot first drop then zig and zag them through bunches of twists, turns and hills. The ride was specially created for the younger set, but parents will get a kick out of it too. 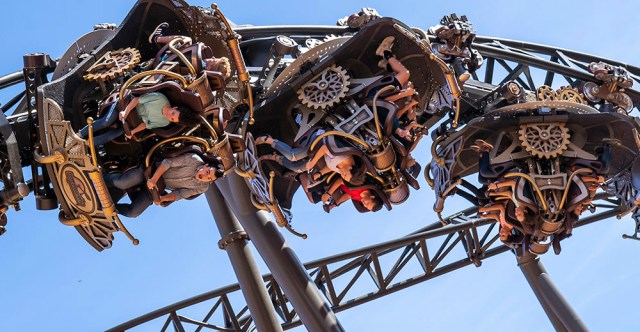 One of the newest roller coasters to open in 2018 is the Time Traveler found at Silver Dollar City in Branson, MO. The story behind this steampunk-styled ride is based on the fictional character Charles Henry, who inherited a clock-making factory and ended up making something totally unexpected. Boasting of being the world’s fastest, steepest and tallest spinning coaster, the Time Traveler shoots guests out of the factory building hurtling at speeds up to 50.3 mph. The ride features a frightening 10-story, 90-degree drop while spinning passengers as they go down. Check out the point of view video to get an even better idea on what’s in store for you. 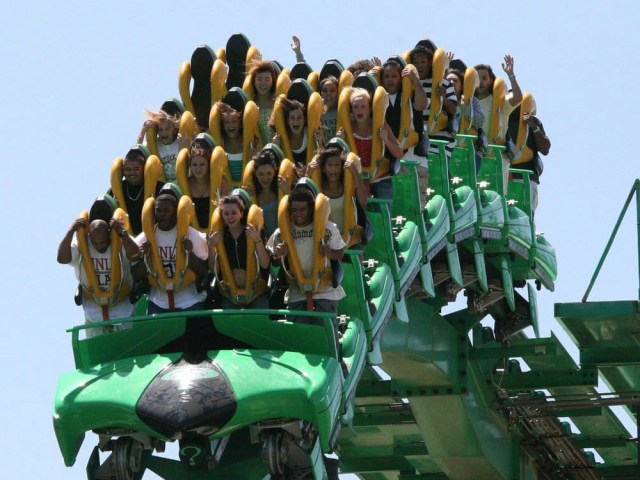 Based on one of Batman’s arch villains, the Riddler’s Revenge can be found at Six Flags Magic Mountain in Valencia, CA. You’ll get to stand up to the Riddler on this ride which is the highest, fastest, longest stand-up track in the world not to mention one that gives its guests more upside-down action on any other stand up coaster. After you get through the 4,370 feet of track, you’ll be happy to sit down for a spell afterward. 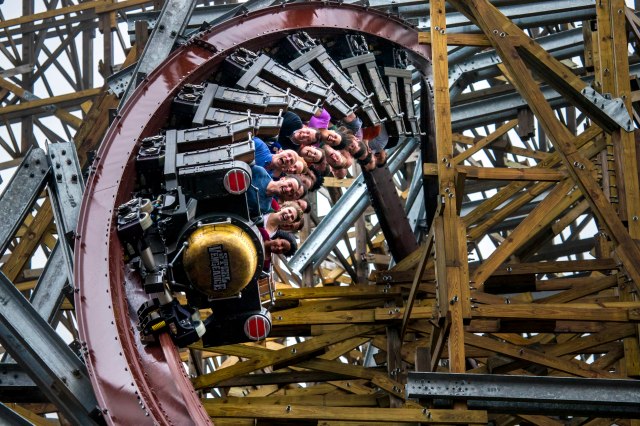 Steel Vengeance is a Wild West thrill ride found at Cedar Point in Sandusky, OH that comes with its own original storyline featuring three outcasts who have come back home to right the wrongs that were done to them in FrontierTown. And they bring with them a roller coaster? Yeah, that’ll show ‘em. At any rate, this is the world’s first steel-on-wood hybrid coaster to stand over 200 feet tall. It has a 90-degree initial drop, almost 30 seconds of airtime and four inversions. 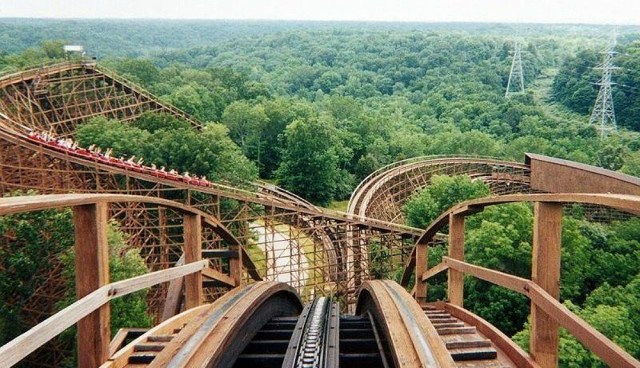 The Longest Roller Coaster: The Beast

When The Beast opened at King’s Island in Mason, OH back in 1979, it was tallest, fastest and longest wooden roller coaster in the world. As much as things have changed since then, the coaster is still the longest at 7,359 feet of track racing through more than 35 acres which takes over four minutes to complete each ride. It's the biggest bang for your buck. 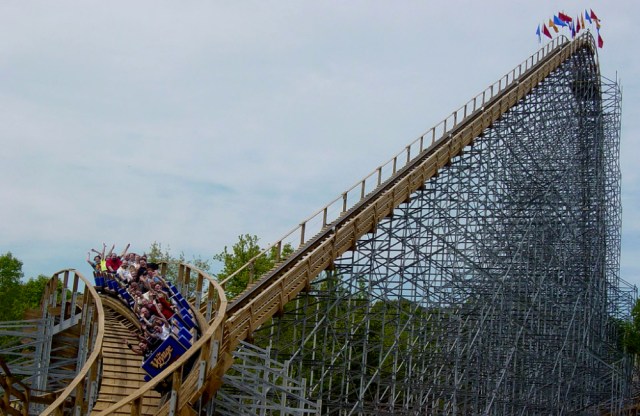 The Roller Coaster with the Most Tunnels: The Voyage

What do roller coasters and tunnels have to do with the pilgrims and The Mayflower? We don’t really know. (Just go with it.) Located within the “Thanksgiving” section of Holiday World theme park in Santa Claus, IN, The Voyage wooden coaster features five underground tunnels, three of which riders will travel through twice creating a total of eight “underground moments.” 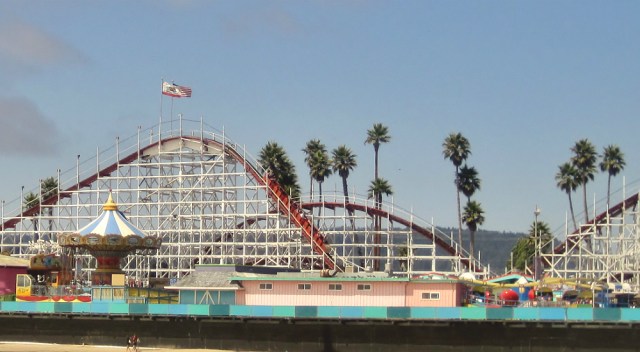 The Most Scenic Roller Coaster: The Giant Dipper

The iconic Giant Dipper roller coaster may be the most recognizable coaster in the U.S. as it has been seen in numerous TV commercials and movies over the years. Located on the Santa Cruz Boardwalk in Santa Cruz, CA, The Giant Dipper was built in 1924 and is the fifth oldest in North America. Riders aboard The Giant Dipper get the extra bonus of sweeping views of the Monterey Bay. 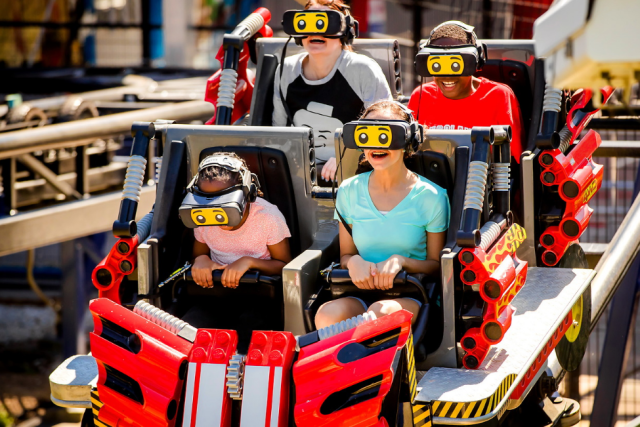 If your little LEGO fans have a need for speed, then they are going to love The Great LEGO Race, which is a new virtual reality rollercoaster found at the LEGOLAND Florida Resort in Winter Haven, FL. Decked out with a VR headset, you’ll climb aboard an actual rollercoaster and experience all the twists and turns of the animated race you’re watching simultaneously on the headset. You’ll be racing against a variety of LEGO Minifigures, from wizards to surfers, as they zig-zag around you over land, water, and air in LEGO vehicles. And of course, everything you see in the world around you is entirely made of LEGO bricks. 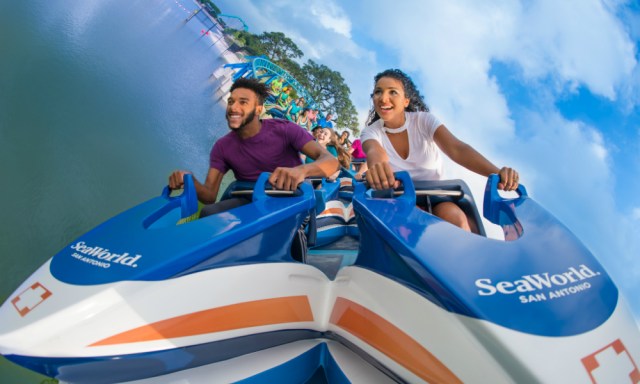 SeaWorld in San Antonio, TX has just opened Wave Breaker which is the first of its kind. The theme here is that you assume the role of a SeaWorld Rescue Team worker and race over the lake simulating a jet ski ride in order to help an animal in danger. After a brief video orientation, riders are launched up a camelback hump, glide over the lake, cross over a small island and back to the station. 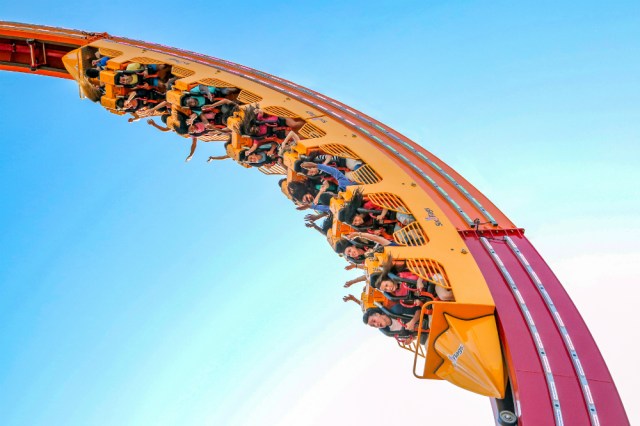 The world’s largest loop roller coaster can be found at Six Flags Great America in Chicago, IL. With the un-family-friendly-sounding name, the Margi Gras Hangover is probably the least like a traditional coaster. Similar to the Ring of Fire ride you’ll find at your local fair, this one stands 100 feet tall and gives riders a totally unique view of the theme park below: upside down! The ride feature 32 face-off seats so you can watch your family’s reactions as you spin round and round. Just don't eat a chili dog before you ride. 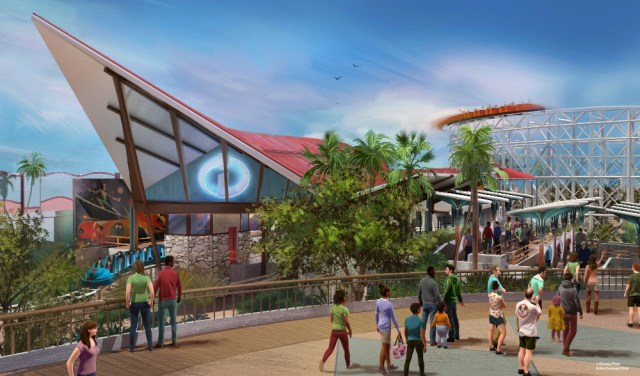 In 2001, Disney’s California Adventure opened California Screamin’ along “Paradise Pier.” This summer the pier is now known as "Pixar Pier," and the ride got a makeover as well: The Incredicoaster which is based on the Disney/Pixar Incredibles movies. According to the park, the new storyline will feature the townspeople of Metroville dedicating their beloved roller coaster to the Incredibles as a symbol of gratitude for the family’s heroic efforts. Alas, things go awry when baby Jack-Jack manifests various superpowers while teleporting from tunnel to tunnel, causing chaos along the way.

All the New Amusement Park Rides Opening This Year

Our Favorite Gondola & Tram Rides from Coast to Coast

6 Autism-Friendly Amusement Parks Everyone Will Love

17 Amusement Parks to Add to Your Bucket List (with Amazing New Attractions!) 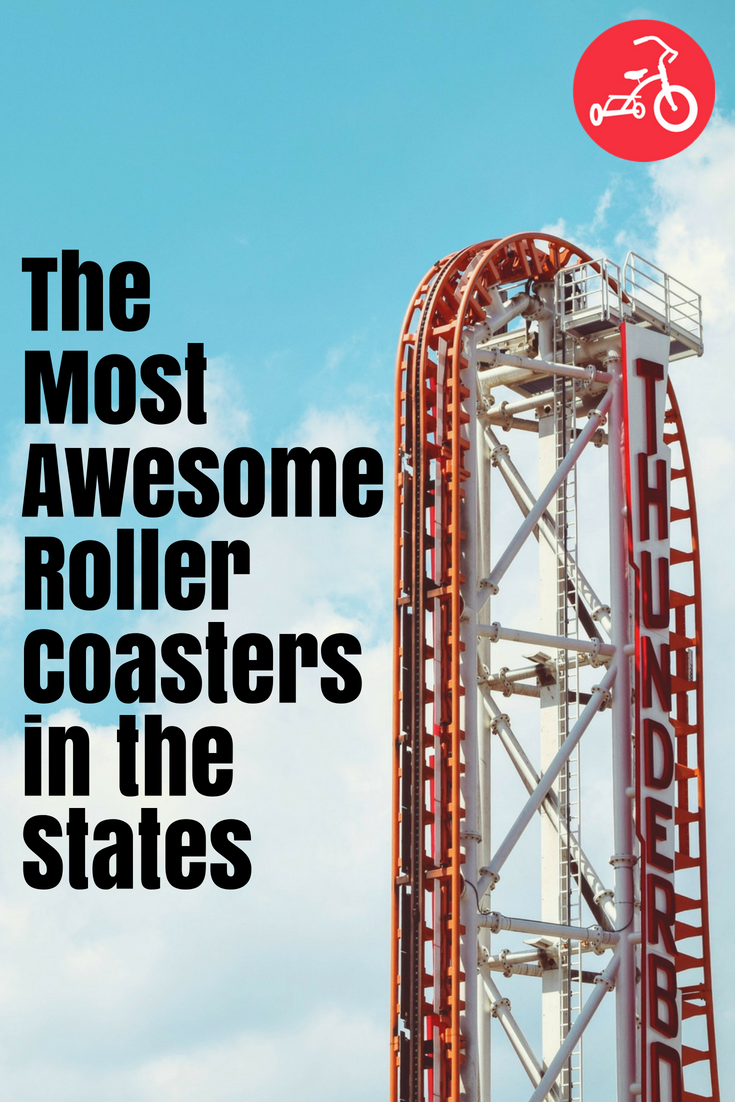