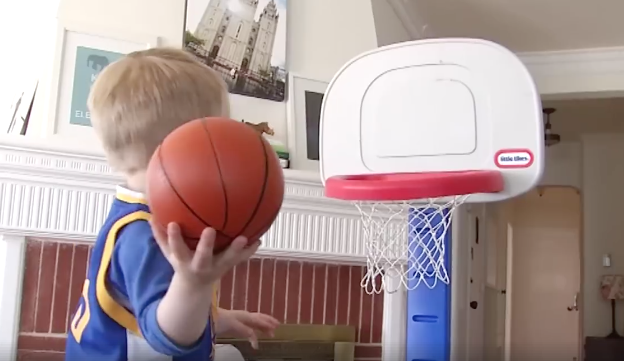 Steph Curry might have just led the Golden State Warriors to a thrilling NBA Championship victory, but a three-year-old basketball fan will be the one winning your heart after you check out the awe-inspiring video below.

Three-year-old Miles Krogue is obsessed with the Golden State Warriors, much like the rest of the country right about now. This tiny tot is no fair weather fan, however, and even has something in common with his idol, Steph Curry. He can hit a basket just like him. Granted it’s a toddler-sized hoop, but the kid’s got mad skills all the same.

As Miles parents explain in the video from ABC News, he’s such a superfan of Curry’s that he wears his jersey everywhere, which has led to some confusion in his young toddler mind and he often refers to himself as Steph Curry. Miles has been shooting baskets since he was in diapers and at this rate he’ll be giving the real NBA star a run for his money in no time.

Do you have your own little phenom on your hands? Share your tot’s talents in the comments below.