Hear ye, hear ye! Girl power has just gone medieval with the revamped performance at Medieval Times where, for the first time in its 34-year history, a female character takes the lead. A queen known to be kind, but firm, has inherited the throne from her father and is now the sole ruler of the land. Casting a matriarch isn’t the only change you’ll find. Read on and we’ll let you in on everything you need to know. 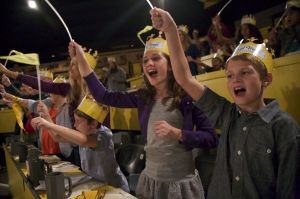 411 on the show
The basic concept of the performance remains the same. You have six knights battling it out fast and furious in jousting matches on real horses and hand-to-hand combat for two hours in an arena that seats 1400 spectators. When you arrive, you’ll be given a cardboard crown that’s color-coded to the area you’ll be seated in. The color on your crown and the section you’re seated in dictates the knight you’ll be rooting for during the evening’s competition. You’ll also have a mini flag to wave at your seat that matches your knight’s crest, which can be upgraded to a larger flag for $3 to up your cheering game. 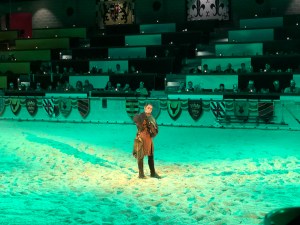 A kid-favorite of the show is when the Royal Falconer steps into the arena with his trusty falcon and puts on a show, sending the bird soaring above their heads. 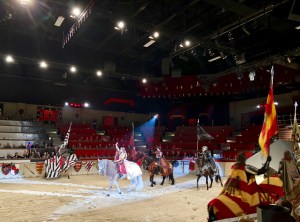 What’s new
The focal points of Medieval Times are still the live-action jousting, fighting, horsemanship, sword fights and the feast, but cast and script tweaks are just the start of significant changes to the show. If you’ve visited before, you’ll notice new costumes that were custom-designed and handmade for both human and horse, new suits of armor, shields and helmets handmade at an armory in Florida, new music by composer and jazz pianist Dr. Daniel May that’s precisely synchronized to every element in the show and newly programmed sound and light components. 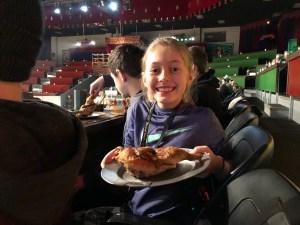 What about the grub?
Yes! A night off for mom and dad from cooking! Sit back, enjoy the show, and dream about coming home to a dish-free sink, while Medieval Times cooks up a utensil-free feast fit for royalty. First, you’ll be seated in the arena at a long table akin to King Arthur’s Court, facing the battle. A hearty tomato bisque served with tasty garlic bread will whet your appetite for the roasted chicken, sweet buttered corn and roasted potatoes that follow. Kids will get a kick out of the serving sizes . . . the chicken portion is humungous . . . and drinking from the plastic goblets. If you have a veggie-only foodie in your mix, a five bean soup served with hummus, carrots, celery, pita bread, corn and potatoes is also an option. 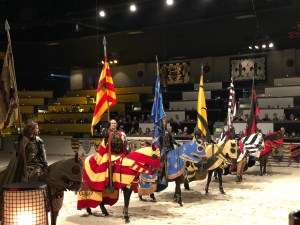 Before the show
The doors open 75-minutes prior to showtime, so give yourself a bit of time to explore because there’s lots the kids will want to check out. Just the castle itself is impressive. Before you start poking around, sidle up to the bar to grab the kids a slushie served in a souvenir cup and a glass of wine or cocktail for you. Take a minute to enjoy the scene, as you’ll see cast members walking about, little ones dressed in their finest regal duds, the horses resting in the stables and even the Royal Falconer makes an appearance. If you start feeling underdressed, purchase your own swag at the castle shops that can take you from peasant to royalty in no time. Beware: there’s lots of cool items your kids will be begging for, from light-up plastic swords and frilly princess crowns to dragons statues and legit chess sets. 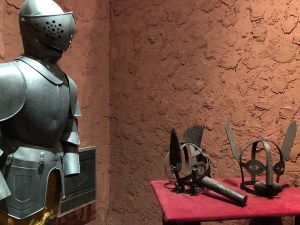 For $2 per person, you can learn everything you ever wanted to know about Medieval torture devices in the Museum of Torture, which features reproductions of torture instruments used during the Middle Ages.

Cost to dine
General admission is $61.95/adults and $36.95/ages 12 and under. Admission is free for kids under the ages of 3 who want to be lap jockeys for the evening.

Make it a party
Give your little prince or princess a birthday that’ll make them feel like the star of the castle with the birthday package. For an additional $7/person, you and your guests will receive a personalized announcement during the show, a group photo, a slice of cake, a frozen strawberry slushie in a souvenir cup and a cheering banner.

Have you taken the kids to Medieval Times? We’d love to hear about it in the Comments below!