Warm days are on the way, and there is an easy way to make sure the kids get enough fresh air and sunshine. These easy outdoor backyard games take almost no props or planning, many of them are well suited to siblings, and some even encourage parents to get in on the fun! Scroll down to see all 25 ideas.

This article is sponsored by Little Tikes®, which offers a variety of toys that’ll turn your backyard into a springtime playground. From water and outdoor kids’ toys to playhouses, ride-on cars and so much more, children two to six years old will be entertained for hours. To learn more about Little Tikes®’ products, visit littletikes.com.

1. Ice Pool Challenge
Chill out with this easy to play, simple-to-stage backyard game that kids of (almost) any age can play. To set it up, fill your kiddie pool with water and dump it in a bag of party ice. Yep, it’s that easy. Then divide the Littles into two teams, each with a bucket. Their goal is to fill the bucket with as many of the submerged ice cubes as they can, using only their feet to move those little rascals from one place to the next. Brrr-ing it!

2. Ninja Attack
In this game, ninjas-in-training test their skills by quietly sneaking up on a ninja master. Intrigued? Start by setting up a ninja course (think: paintball course) using oversized moving boxes, play tunnels, and other objects kids can quickly duck behind (or into). This is where the little ninjas will try to hide as the ninja master scans the yard for tiny foes. Then, have the master stand at one end of the yard, opposite her ninja attackers. When you say go, the ninja master turns her back on her opponents, while they stealthily make their way toward her. When you say stop, little ninjas duck behind whatever’s closest in the hopes the master ninja won’t spy them. If she does, they’re out. But if you’ve got the skill, and can reach her first, you become the master!

3. Balloon Relay
Fill up a few water balloons and get ready to giggle. Line up the tot lot Madeline-style (that’s two straight lines), before handing each line leader a balloon and having them place it securely between their knees. Then it’s time to start the game! Players pass the balloon, knees-to-knees, down the row until it reaches the finish. It doesn’t get easier than that!

4. Play with Hula-Hoops
Who says you have to have moves like Jagger to have fun with a hula hoop? Check out Learn Play Imagine‘s awesome hula hoop games—you’ll be amazed at the different and new ways you can play with one of the oldest toys imaginable.

5. Water Balloon Piñata
Bye-bye piñata loaded with sugary sweets and playful trinkets; hello suspended deluge! String up an array of colorful water balloons in the yard (over a tree, from the swing set) to serve as the party piñata. Line up the Littles, bursting with excitement to try this creative alternative, and let each one take a swing in turn, with a plastic bat, or even a wrapping paper tube, in the hopes of hitting the delicate target, and letting loose the wild waterfall. Blindfolded or not, this is one guaranteed way to get wet!

6. Monkey Around.
Building on the “tag, you’re it!” theme, Monkey Tails is a silly variation that gets the whole crew involved in the chase. Simply tuck tails (socks or even dad’s ties make great ones) into the monkeys’ waistbands, then send everyone off, ducking, dodging and running wild, to keep their tails from being nabbed by another player. The last player with a tail wins.

7. Bandana Tag
Transform the typical game of tag into a free-for-all (this one works best with older kiddos). The twist? They’re all “it.” To play, hand out bandanas to your crew to tuck in along their waistline, and let the great chase begin! Players tag each other by snagging bandanas, while simultaneously guarding their own until one player is left standing. It’s a wild romp they’ll want to play over and over again.

8. Bucket Toss
You can’t go wrong with carnival games, and the bucket toss is an all-time favorite. Line up the prize-filled buckets in a row. Each kid who power-slings a ball into a bucket is the proud owner of the goodie waiting to be plucked up. Opt for three turns each, otherwise, there could be a lot of standing (or wiggling) happening!

9. Squirt Gun Soccer
You should probably start stockpiling super soakers for this one. Little athletes will have a blast with this no-kick version of soccer that trades feet for squirt guns and traditional soccer balls for a lighter-than-air beach ball. To start this backyard game, break the party group into two teams, and arm each player with a fully loaded squirt gun. They’ll use the stream to move the ball around the field as they try to score (or block) a goal. Set up sports cones at either end of the field so they know where to aim, and then it’s time to play. Go, team!

10. Green Light, Go!
We love Red Light/Green Light because it’s a simple and quick backyard game to play. Plus, it gives parents the option to take it easy as the caller or join in the game (hello daily workout!). Stop and go until they’re tuckered out from all that running.

11. Marco Polo (with a twist)
Modify a classic pool game with a few tweaks, and you’ve got a backyard game that’ll tire out your kids. Play a few rounds of Marco-Polo outside—all that ducking, dodging and blind searching is more tiring than you’d expect, which makes it a great way to wear out wee ones pre-bedtime.

12. Have a Sponge Ball War
Better than a water balloon fight (sayonara, plastic balloons all over the yard!), DIY sponge balls (find them at It’s Overflowing) are reusable, versatile and a total blast.

13. Give Up the Charade
Have your little monkey stay in character when you play a quick game of animal charades. No prep is necessary for this easy guessing game. Just pick your favorite animal and go for it! With each successful guess, trade places and start again. Ee-i-ee-i-o!

14. Make and Play Giant Pick-Up Sticks
Instead of playing pick up sticks with the chopstick-sized sticks of our youth, why not spray paint the sticks in your yard and play with those, instead? Bonus: Guess who helps you gather the sticks out of your yard? And they say they’re too young for yard work. You can thank I Heart Naptime for the great idea.

15. Let’s Race!
On your mark, get set, GO! Whether you’re staging a relay race or a full-tilt foot race, all you need for a memorable obstacle course is whatever you’ve got in your garage (think big wheels, basketballs and jump ropes) and a little creativity. Want to up the ante? Add a stopwatch, and you’ll have them competing against their own PRs all afternoon long. Nothing gets the giggles going more than an obstacle that involves improv dancing!

16. Play Blind-Man’s Bluff
This classic game is like thinking-man’s tag. All you need is a blindfold and a few players to start. Put the blindfold on the Seeker; then spin them around a few times while the other players scatter. Now it’s time to seek. Using their keen other senses, the Skeeker tries to tag the scattered players who are rooted in place. Sure, players can duck and dodge their outstretched arms, but they can’t move their feet. It’s a giggle-worthy backyard game everyone can play!

17. Food Truck
From the brilliant mind behind Tinker Lab comes another great way to pretend play outdoors. If you’ve got a big cardboard box, then you’ve got a restaurant, a vehicle and a store! Yup, it’s a pretend food truck and it’s rolling right into your living room. They’ll be serving breakfast, lunch, dinner and dessert— all in one afternoon.

18. Statue & Tourist
Perfect for when the light is fading (or in a dark room). One player is the “tourist” who is viewing the amazing statue garden. They get a flashlight.  All the other players must stay as still as a statue: they are allowed to move when the light is off, but as soon as the tourist turns the flashlight on they must stay still. When the flashlight is on the statue, the tourist tries to make the statue giggle or wiggle. If they do, they join the tourist’s team and go tour for the next statue.

19. Run Through the Sprinkler
Turn your pool noodle into the best kiddie pool accessory in town, by converting it into an overhead sprinkler. Mommy’s Block Party can walk you through the process. It’s like a trip to the splash pad, without leaving the house. That sounds like the perfect summer pace to us! Check out these other amazing things you can do with a pool noodle (that don’t involve a pool).

20. Rock, Paper, Scissors
Get your game hands on and “shoot!” Want to know how to be a Rock Paper Scissors star? Watch this fun video from Buzzfeed on “How to Win at Rock Paper Scissors.” Or try the Japanese version, called Janken. Start by saying “saisho wa guu.” Then “janken pon” as you pump, before throwing on “pon.” The winning combos are still the same in this timeless, quick backyard game you can play at home or on the go.

21. Simon Says
Simon says to try this backyard game with your kids instead of handing them your phone the next time you’re waiting for anything (i.e. at the doctor’s office, outside the classroom, etc.). If you didn’t grow up on Planet Earth and don’t know how to play, here are the rules.

22. Superhero Showdown
Organize a meeting of the superheroes and watch the afternoon fly by. You might be ducking to avoid Batman’s (imaginary) gadgets and Spidey’s web all afternoon but the non-stop giggle-fest will be worth the effort.

23. 21 Questions, or “Who Am I?”
One person comes up with a person or thing; the other person has to ask “Yes” or “No” questions to try to figure out what or who it is. For younger kids, nix the Yes or No and just let any question do.

25. Look for Pictures in the Clouds
After all of these fun activities, the last, and best one on your bucket list is to lay back in the grass and hunt for pictures floating by in the clouds. See who can be the first to spot an animal, an imaginary being, a building, a car and whatever other fun shapes you can think of. 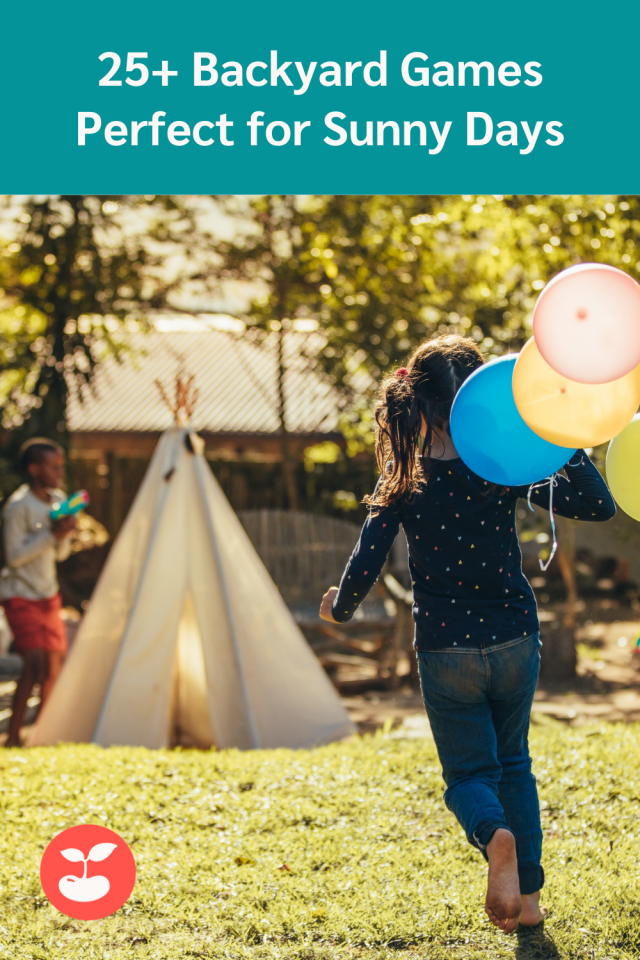