We all know those summer days that are too hot and all you want is to jump through a sprinkler.  With these water games for kids, your family will get that cool down you all need while having a blast! Scroll on to find our favorite water games that will keep your family in cool-down mode. A note about water balloons: they are fun as can be, but please be sure to clean up your little pieces: they can be choking hazards for little birds. Have a few prizes as an incentive to get kids in on a quick clean-up.

1. Water Balloon Basketball
This easy water game for kids is a slam dunk for any age, because all kiddos need to do is point and shoot a squishy water balloon into a larger-than-regulation-sized hoop. To get the game started, have them hold a hula-hoop tummy level, the way you carry a laundry basket. Then line up kids for a turn to score two points. After each tiny baller sinks a splat-worthy shot, trade out the positions so everyone gets a turn. They shoot, they score on this one!

2. Water Balloon Towel Toss
Bust out beach towels for this easy-to-run toss game that’s a little like tennis, but without the net or the racquets. Kiddos play in teams of four, where each pair holds a beach towel gently between them, with a little bit of slack. The goal? To toss the balloon back and forth between two blankets without letting it drop… as many times as you can. The team with the most consecutive bounces (we’re betting they’ll be the driest of the bunch too!) wins!

3. Water Balloon Pop!
The kids will clock plenty of giggle mileage when they play this fast-paced game. Break your group into two teams, each with a heaping bucket of fully-loaded water balloons. When you say go, one member from each team grabs a balloon, races down the yard and tries to pop it with his or her body (think stomping, sitting, or even laying on it!). Guarantee a dousing by having the kids break balloons on a chair, or, let the ground take the brunt of the splash. Once the balloon is popped, it’s back to the start to tag the next kiddo. On your mark, get set, go!

4. Water Balloon Piñata
String up an array of colorful water balloons in the yard (over a tree, from the swing set) to serve as the piñata. Line up the Littles, and let each one take a swing in turn, with a plastic bat, or even a wrapping paper tube, in the hopes of hitting the delicate target, and letting loose the wild waterfall. Blindfolded or not, this is one guaranteed way to get wet!

5. Sponge Ball Relay
Get the energy out of your kiddos with a simple sponge ball relay race. Divide your group into two teams, then set up two empty buckets on one end of the yard, one for each team. Place another two buckets, full of water and sopping wet sponge balls, on the opposite end. When the whistle blows, one player from each team grabs a soaked sponge, runs it lickety-split to the empty bucket and wrings out as much water as he or she can before running back to tag the next player. It’s easy to play this one with a time limit—the team with the fullest bucket wins! Or, until one team’s bucket spills over in victory.

6. Keep Your Eye on the Balloon
For this water game for kids, think carnival shooting range—floating balloons being used as target practice. For the set up you’ll need lots of helium balloons, and weights that are strong enough to hold the balloons in place when they take direct hits. Spread the targets out on the playing field. Three rows—each a different height and different distance from the shooting line—works well. Then, have kidlets step right up and take their best shot; each time they get a hit, they get a prize. Bullseye!

7. Squirt Gun Soccer
You should probably start stockpiling super soakers for this one. Little athletes will get a kic…er… have a blast with this no-kick version of soccer that trades feet for squirt guns, and traditional soccer balls for a lighter-than-air beach ball. To start this wannabe match, break the group into two teams, and arm each player with a fully loaded squirt gun. They’ll use the stream to move the ball around the field as they try to score (or block) a goal. Set up sports cones at either end of the field so they know where to aim, and then it’s time to play. Go team!

8. DIY Soakers
Just say no to broken water balloon bits littering the yard; use sponge balls instead! Just as throwable, just as drenchable, this soft alternative won’t leave behind a colorful mess for you to pick up. Aimee at It’s Overflowing has the DIY know-how you need in order to make your own colorful soakers.

9. Cup Races
Think NCAA tourney when you whip out cup races at the party. All the tiny kddos will get a chance to work their way through the Sweet Sixteen and Elite Eight for a shot at the big time—the Final Four—as they compete head-to-head, racing plastic cups down a string, using squirt guns. Allison spells out the set up and racing deets at her blog, All for the Boys so you can run the races like a pro.

10. Sponge Ball Toss
Got buckets? Then you’ve got all you need for some sponge ball toss. Line the kidlets up facing each other a couple feet apart, in two straight lines, Madeline style. One holds a bucket, the other a sopping wet sponge ball. The object? To toss the sponge ball into the bucket. The catch? With each successful toss, the bucket holder takes a step back. It’s a toss till you miss kind of game, then you know it’s time to switch places. The prize? Soaking in the fun of it all.

Related Stories:
Slip Into Summer with These Inflatable Backyard Water Slides
The Best Waterparks In America
15 Water Slides You Have to See to Believe 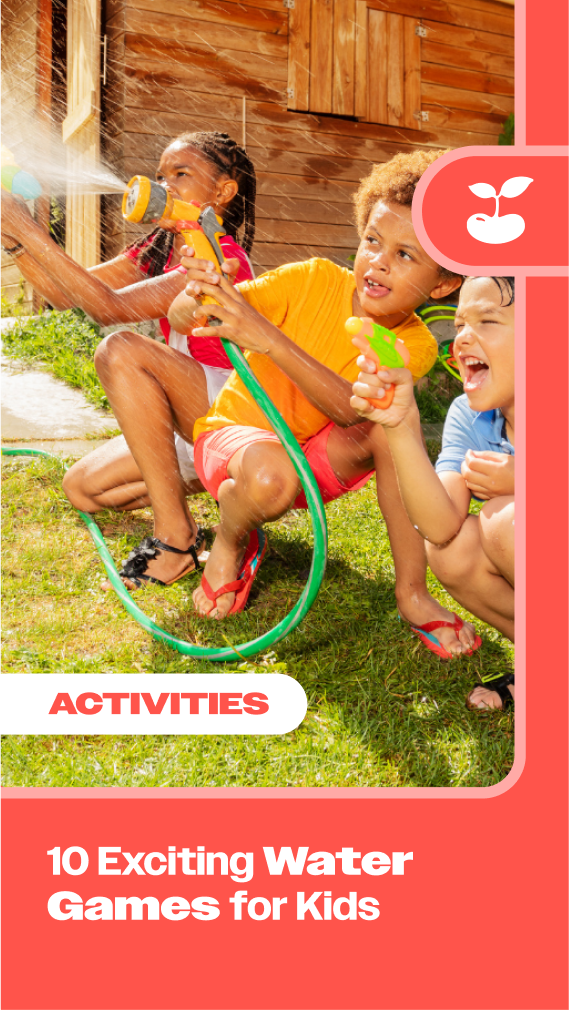