June, July and August babies will be rightly jealous when you break out exciting DIY games that take the chill out of winter birthdays. That’s right, we’ve got tons of birthday game ideas for every age and stage to help make your indoor birthday party memorable.

Simplicity is best with this sweet set, which makes for easy-peasy prep. 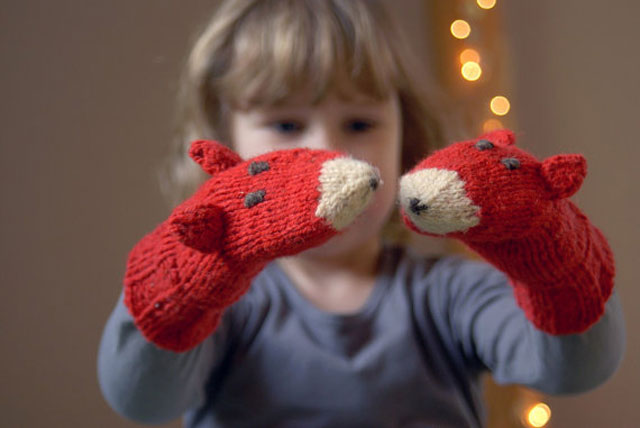 Mitten Match
if your closet isn’t packed full of cast-off mittens from years past, a trip to the dollar store might be necessary to play this sweet matching game found on Tales of a Ranting Ginger. Once you’ve assembled enough wooly pairs to outfit party guests, hide one half from each mitten pair in plain sight around the house. Pass the other half out to little hunters, then let them loose to find its match. It’s Game Over once all the pairs have been reunited. Extra-smart parent points if they get to keep the matched pair as part of their dollar store party loot!

Hot Snowball
This winter variation on hot potato is sure to please any crowd of petite partiers waiting to be entertained. It all starts with a trip to your local craft store to grab a Styrofoam ball or puffy white pom-pom. Dress it up with a little glitter, and you’ve got one sparkly snowball that’s ready to pass around. To play, circle up the kids, turn on the tunes and pass the snowy ball around the group until the music stops. If you’re caught holding the ball, it’s sideline time for you, baby. Last one left wins! 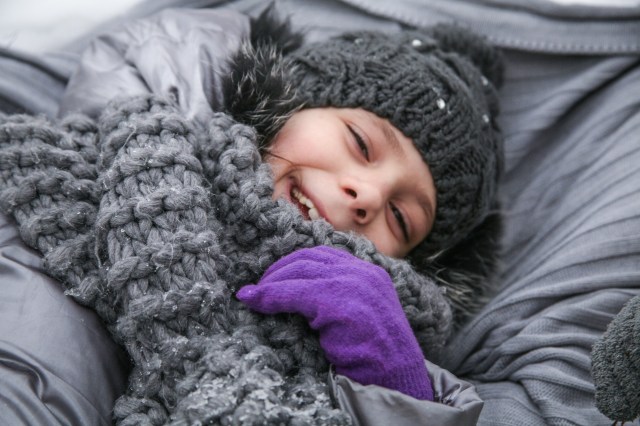 Bundle Up, Baby
If this game had an inspiration it would have to be poor Randy in A Christmas Story, bundled tightly in his winter digs. For this game, you’ll need plenty of blustery day clothes—hats, scarves, mittens, earmuffs, snow pants, heavy coats, etc.—if it keeps you warm, use it. Then, gather the tots together and have each one take turns putting on all the winter gear, as fast as they can, while you keep time (or not). Turn this into a big kid game by dividing the kids into two teams that race against each other, as they bundle up a willing teammate.

Ski Ball Jump
Turn an everyday play idea designed by Susie at busytoddler.com into a party-ready game for tots when you see just how many balls each party goer can launch into the waiting basket below. All it takes is a little DIY know-how, a soft landing for the balls, and of course, toddlers ready to show off their counting prowess during this party game. 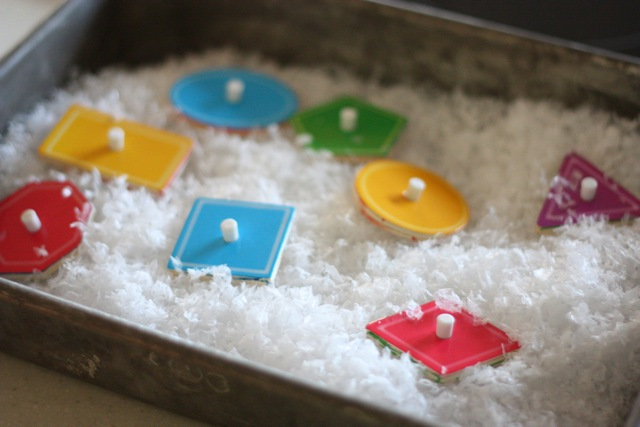 photo: I Can Teach My Child

Snowy Search and Rescue
This classic sensory activity seamlessly transitions into a full-on toddler game as kids race to dig hidden objects out of the “snow.” Bury tiny objects like puzzle pieces, Duplo bricks or seasonal doodads under layers of cotton balls or fake snow (a great idea thanks to I Can Teach My Child) in a baking dish or large container. Then have little seekers dig them out using hands, sand shovels or even spoons. They’ll be delighted with their finds. You’ll be delighted at how easy this game is to run.

Preschoolers are just coming into their own, which makes gaming with them all the more exciting. A little competition and a few wonderfully wintery twists, and you’ve got the makings for perfect preschool party games! 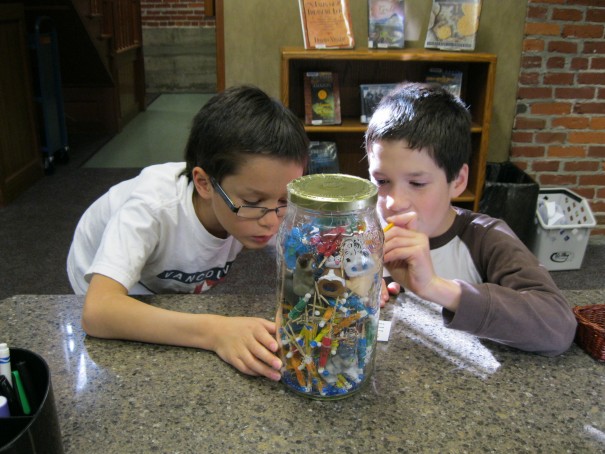 Winter Guessing Jar
Keep the wiggles at bay by putting out a guessing jar with paper and pencils. Fill it with snowflake buttons, blue and white LEGO, blue and white M&M’s or any other snowy day combo you can think up. Then invite guests to make their best how-many guess at some point during the party. The coolest part? The jar and its contents can be given away as a prize. It’s easy, times two!

Snowman Relay
Got snow? No worries if you don’t. This no-snow snowman relay is perfect for an indoor bash. You’ll need two large felt snowmen and stylish felt accessories to match: a carrot nose, colorful buttons, coal-colored eyes, and even a warm scarf. Hang the snowmen on the wall, and line your little guests up next to the accessories before the race begins. After it does, each player takes a turn putting one accessory onto this frosty friend. The first snowman who’s ready to lead the parade through the town wins! Psst … construction paper is a great alternative to felt for this sweet game. 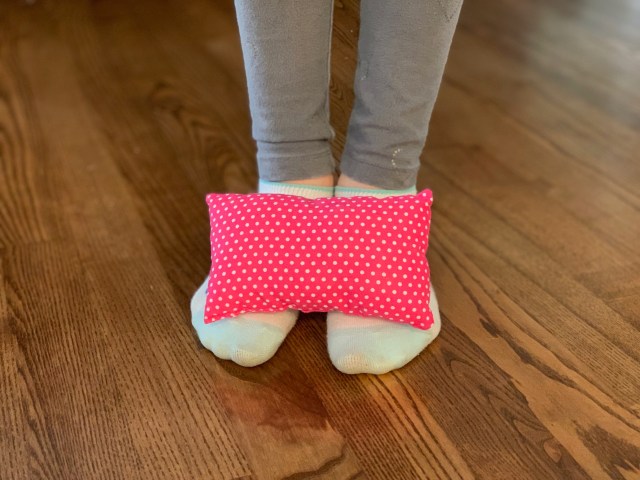 Penguin Relay
Consider this relay game the winterized version of an egg spoon race. Divide your little partiers into two teams. Then put half of each team at one end of the playing field and half at the other. Kids then place a beanbag on top of their feet, papa penguin style. When you say go, each team sends a member shuffling down to the other end, carefully balancing their “egg” on their feet, until they reach a teammate on the other side. Transfer the egg to the next player to keep the relay going.

Candy Ball Game
Collecting goodie bag favors as a game? Yes, please! Hide winter birthday trinkets like rings, mini blowing bubbles wrapped candy and more in a plastic wrap ball (Thanks, Guru to the Outdoors for this great explanation on how to make it!). Then, pass the ball around the circle, letting curious kids unwind and find the hidden treasures within. A few choice finds for each kid, and you’re halfway there on the party favor front! Or, kick it up a notch, and add in the dice-rolling element (explained here) for older kids—which is just as fun to watch as it is to play!

They’re big kids now, so they should play big kid games. Check out these three games that will keep them laughing and give them a challenge or two. 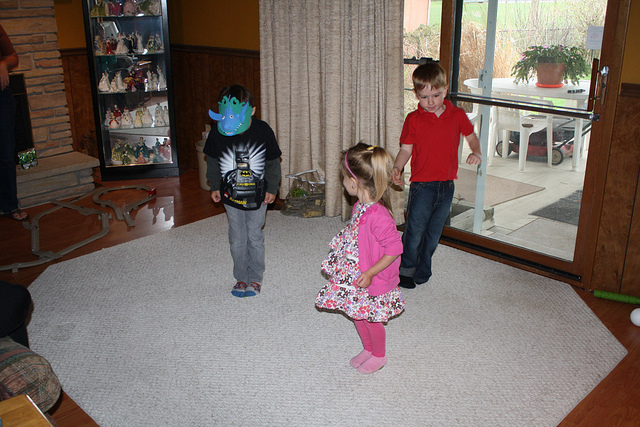 Musical Snowflakes
Musical chairs get a winter makeover with this game. Instead of setting up chairs, use paper snowflakes on the ground in a circle for kiddos to stand on. Then, crank the tunes and have the kids walk the line. Whoever is left without a snowflake when the music stops takes a seat; the last kid left standing wins. Rock a twofer on this game by first having tiny guests decorate pre-cut paper snowflakes at a craft table to use in the game.

Snow Shooters
These adorable snow shooters from Growing a Jeweled Rose are the perfect inspiration for snowy party games. Arm each player with a snow shooter and mini marshmallows, and then have them take aim one by one at a long-distance target. Closest ‘mallow wins the sharpshooter award of the day! 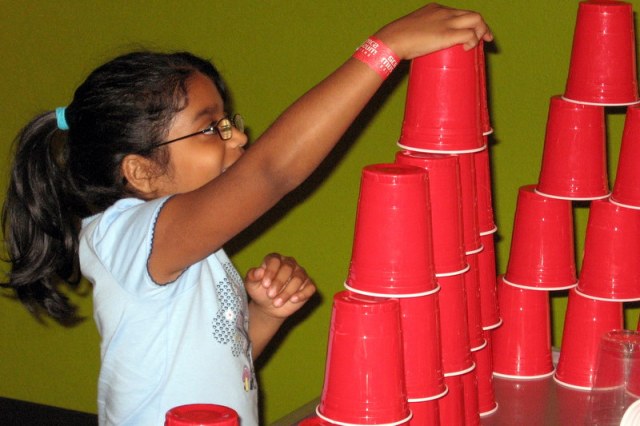 Ice Castle Construction
The race is on to build the highest ice castle on the block with this Bob the Builder meets Elsa cup stacking game. Little partiers can work in teams on this one, or individual players can go head-to-head. The goal? To stack a tower that outshines your opponent’s in the shortest amount of time. The building materials? Blue Solo cups, of course.

Winter-Themed Charades
Who doesn’t love a good game of charades? This no-prep party favorite can easily be tailored to fit a winter party theme. Write out favorite snowy activities like skiing, sledding and snowball fights, then put them in the jar. Break party guests into groups, then have them act out the scenes for their team. Remember, if the guessers can’t quite figure it out, the other team has a chance to steal.

Snowball targets
Put a wintery twist on an old school carnival game with target practice. All it takes is plastic water bottles, a few squirt guns and small Styrofoam craft balls. Balance the balls on top of the water bottles, and line them up in a row, or use empty overturned boxes to make a few different levels to change up the difficulty. Then it’s as simple as ready, aim and firing the squirt guns at the precariously balanced balls to see how many each player can get down. Points based on difficulty or overall balls down make this an easy game to score so kids can claim a prize.

Give grade-schooler kids the chance to flex their muscles and their brains with these games that take speed, concentration and maybe even a bit of skill. 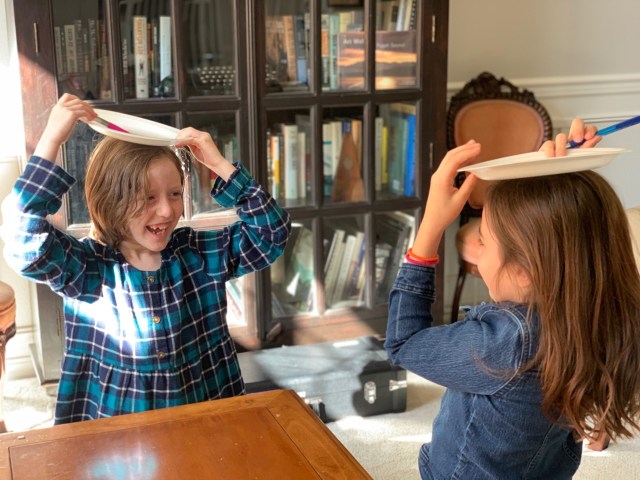 Silly Snowmen
If there’s one thing grade-schoolers love, it’s showing off their mad skills. In this game, it’ll take a lot of skill, artistic inspiration and concentration to win. While the game seems simple at first glance—the kids draw snowmen on the paper plates—there’s a simple, yet hilarious twist that makes this a party-worthy activity. The kids can’t see what they’re drawing because the plates are on top of their heads. As they draw, make sure the kids add all the requisite snowman parts to their masterpiece—three-body balls, a hat, eyes, arms, buttons and the iconic carrot nose. Have them share their silly creations to choose who wins this creative competition.

Mitten Pictionary
You can find Pictionary at any old party, but this is your party, so it needs to be special. Crank up the laughter on a typical Pictionary game by having guests wear mittens (the thicker the better) while they draw their way to a win illustrating winter words like a snowman, polar bear and penguins on the board. Want to make it more challenging? Have the little artists don ski goggles too! 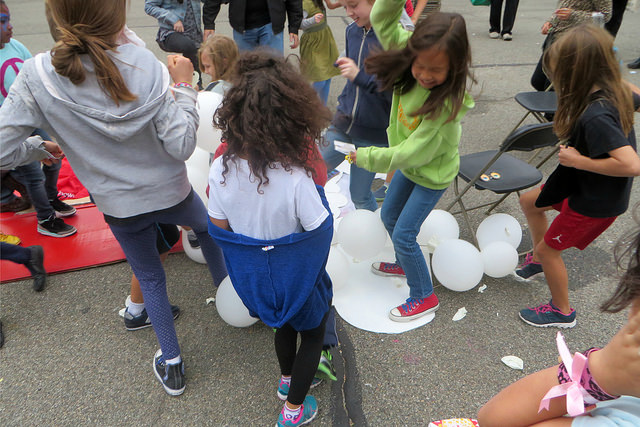 Snowball Stomp
This super cute snowball stomp idea from Birthday Party Ideas 4 Kids takes a lot of hot air and a lot of space. Blow up white balloons for each player, and then tie the balloons around their ankles, so there’s some distance between them and their snowball. Give the “go!” sign, then give them plenty of space to stomp on each other’s snowballs. Super fast and super fun, this is sure to be a popular game with this group!

Blizzard
This adorable game found on Coolest Holiday Parties is a flurry that plays like hockey, without the hard-hitting checking. Instead of a puck, players use a white balloon, and instead of sticks, they use air to propel the “puck” into the other team’s goal (no hands or feet, please!). Paper plate paddles sound like the perfect fit for this one. When the buzzer sounds, the team with the most goals wins!

Topsy Turvey Snowman Cups Your party animals will work up a serious sweat when they divide into two groups and play this cup turning game. Ahead of time, draw snowman faces on a slew of white solo cups. When they’re ready to play, spread the snowman cups out on the ground so that half are upright and half are upside down. Team One’s goal is to make all snowmen upright. Team Two's goal is just the opposite; it’s snowman side down for them. Yell Go! and watch the madness unfold. Play for about five minutes before you add up the scores and play again (and again and again!). They’ll earn their cake with this one! 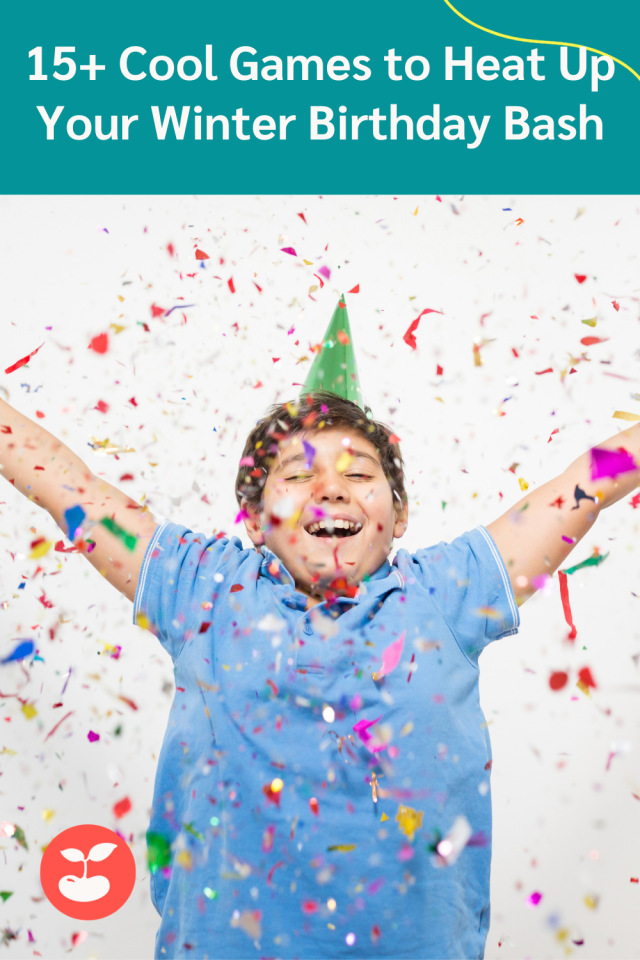