Kellogg’s recently announced the return of fan fave cereal SMORZ to store shelves. As if this news isn’t good enough for the sweet cereal-lover, Kellogg’s is upgrading the chocolaty graham goodness with a jumbo-fied snack-time version!

The new Kellogg’s SMORZ Jumbo Snax is more than just cereal. Even though your kiddo may have enjoyed a breakfast bowl of the original SMORZ, this time around they can snack on the sweets in a whole new way. Instead of milk and spoon, this version of SMORZ is made to eat on-the-go, with your hands. 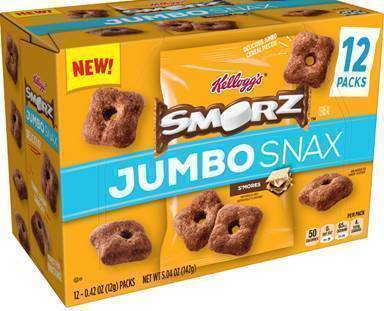 SMORZ Jumbo Snax are conveniently packaged in individual pouches. The over-sized version of the cereal still has the same chocolate flavor of a toasty s’more—minus the ooey, gooey marshmallow mess of the real deal.

Kellogg’s New Little Debbie Cereal Is Out of This World

Smucker’s Unicorn Magic Shell Is Everything Your Ice Cream Needs