If Your Kids Love ‘Harry Potter,’ Read These Books Next

Help Encourage Your Kids to Read With This Mysterious Read

There are plenty of things your kids wish they could ban. Broccoli for instance. Or bedtimes. But we’re guessing books wouldn’t make their list. Promote the power of “yes” by pulling these banned books off the shelf and into your evening reading routine. You won’t be disappointed … and neither will the kids!

Save this to your fave Pinterest board by clicking here!

When you read this book title as a directive, rather than as an innocent and undeniably catchy rhyme, it’s easy to see why a Toronto father’s rights advocate challenged the wildly popular Dr. Seuss book. But pulling it from library shelves because it “encouraged children to use violence against their fathers” was only the tip of the iceberg for his 2014 challenge. He also thought the library should fork over some cash to cover “damages resulting from the book.” Ages 3-7

If you haven’t read this story about humble, radiant Wilbur (a.k.a. Some Pig) then you’re in for a treat. Although a group of concerned parents disagreed in 2006. They tried to have this book banned from classrooms because they found the book’s talking animals to be disrespectful to God. Ages: 8-12

Let’s be honest. This book is every parent’s fantasy. After all who doesn’t want a song-activated magic pot that cooks them dinner? The late Tomie dePaola’s classic tale of the Grandma Witch has been banned in several U.S. school libraries for promoting witchcraft. Want more timeless tales like this one? Check out our list of children’s classics. Ages: 4-8.

It seems a certain 1987 version of this book would have fared better in Europe than it did in the States, where it was banned in both Michigan and New York in the mid-1990s. Although the story behind finding the now-infamous “nude bather,” that caused the version to be pulled from the shelves, has since been lost, we’re guessing it had something to do with one reader’s relentless search for Waldo. Ages: 5-9

When it comes to dystopian novels, tweens and teens just can't get enough of them. And Lois Lowry's Newbery Award-winning classic continues the trend. But parents in Blue Springs, Missouri grew concerned over "twisted" and "lewd" content in the book and tried to have it removed from an eighth-grade reading list in 2003. The good news is, the compelling story is continued on in three more books in the series. Ages: 12 & up

Readers the world over love Harriet the Spy, because not only does she tells it like it is, she also rides a dumbwaiter, and who wouldn’t want to try that? Over the years, the book has been banned in school libraries because parents are concerned it teaches children to “lie, spy, talk back and curse.” Ages: 8-12

Where the Sidewalk Ends

Kids have loved the quirky drawings and odd poetry of Shel Silverstein for generations. But in 1986, the West Allis Milwaukee School District banned this particular poetry collection because of “drug reference, suicide, death and a disrespect for truth and authority.” Shortly after, a school district in Pennsylvania did the same. Ages: 6-8

The Lion, the Witch and the Wardrobe

Magical wardrobes, talking lions and evil queens: Narnia’s got dibs on some of the best fantasy elements ever written. But the first book in this popular series was first banned in 1990 because adults were concerned by its “graphic violence, mysticism and gore.” Then in 2005, a group focused on the separation of church and state tried banning the book from Florida’s public schools after then-Governor, Jeb Bush, promoted it in a statewide reading contest. Ages: 8 & up

The 10th most challenged and banned book of 2017, I am Jazz is an autobiographical picture book chronicling the early years of transgender reality TV star, Jazz Jennings. It first appeared on the banned list when a group of Wisconsin parents objected to its reading at school. They were concerned about sex education, language and offensive viewpoints. Ages: 4-8

Where the Wild Things Are

You’ve read this one to your sidekick so many times, you’ve got it memorized. But when this classic hit the scene in 1963, it caused quite a stir. Banned in many southern states for depicting child abuse (the no-go supper for Max), it’s also been challenged for being “too dark” and showing supernatural elements. If you’re looking for more books to put on your nighttime reading list try one of these all-time faves. Ages: 4-8

The surprisingly dark tales spun by the Brothers Grimm have been challenged many times. But we bet the specifics behind this particularly gruesome classic will surprise you. Was it because of images of cannibalism? Or perhaps because it promoted unhealthy eating habits or tooth decay? Nope. In 1992 two witches challenged this book claiming it painted witches in a bad light. Ages: 5 & up

A Wrinkle in Time

This Newbery Award winner’s been challenged a few times for undermining religious beliefs, and in 1985 it was challenged at a Florida elementary school for promoting witchcraft, crystal balls and demons. Ages: 10-14

First came Roy. Then came Silo. Then came a baby and made their family complete. Based on the true story of two male penguins at New York’s Central Park Zoo, this ALA Notable Children’s Book made its way onto the banned book list for featuring a same-sex relationship. Ages: 2-5

More a case of mistaken identity than concern over content, Bill Martin’s classic children’s book was banned by the Texas State Board of Education in 2010. It turns out that the children’s author didn’t also pen Ethical Marxism: The Categorical Imperative of Liberation. Oops! Ages: 2-5

If you think your house is filled with drama, you haven’t been to middle school lately. Get a refresher with this tween graphic novel that follows theater geek Callie as she strives to build a Broadway-worthy set and figure out … well, boys. But the real drama for this book came when it was banned in one school district and two school libraries in Texas because it features LGBTQ characters. Ages: 10-14

We dare you not to shed a tear over this touching story of a selfless tree who loves a boy. But it was a cynical interpretation of the tree’s selfless giving as “sexist content” that landed this Shel Silverstein classic on a Colorado library’s banned book list in 1988. Ages: 1-8

J.K. Rowling’s Harry Potter series has been translated into 68 different languages, distributed in over 200 different territories worldwide, and has sold over 450 million copies at last count. And the number of challenges and bans on this series, usually for depicting witchcraft and wizardry and promoting anti-family themes, is also impressive. By 2000, it had been challenged about 650 different times. Ages: 8 & up

Another Newbery Award-winner, this story of friendship and loss is a definite tearjerker. But it wasn’t the tragic death of a friend that led the New Brighton Area School District in Pennsylvania to remove it from their 5th-grade classrooms. They were concerned about the disrespect, foul language and confusion that could be created when kids read about Terabithia, the fantasy world dreamed up by BFFs Jesse and Leslie. Ages: 9 & up

Roald Dahl is no stranger to the banned book list. James and the Giant Peach is on there. Charlie and the Chocolate Factory is too. But it’s his classic tale of a boy-turned-mouse and his cigar-smoking grandmother who fight against witches that continues to find its way onto the list again and again and again. It was challenged at least ten times in the late 1980s and early 1990s for things like “being too sophisticated” and “not teaching moral values.” Ages: 8-12

Families coming in all shapes, sizes and colors is the theme of this popular Todd Parr book. But concerns over depicting families that have two moms or two dads kept this bold and colorful paperback off the shelves in the Erie School District in Illinois in 2012. Ages: 5-6

One of Avi’s lesser-known works, it’s the story of 13-year-old Jonathan, who wants to fight beside his brother and cousin, against the British, during the Revolutionary War. This ALA-notable book was banned at the Bay District school library in 2008 over parent concerns around the use of profanity. Ages: 9 & up

If your kid has read the book, watched the movie and bought the T-shirt, then you’re not alone. But you might be surprised to find that this popular Dave Pilkey series was at one time the most banned book in the country. In the early books, concerns were raised over content that wasn’t suited for the age group and encouraging disobedience. The release of the 12th book caused new concerns over references to Harold being gay. Ages: 7-10

Anne Frank: The Diary of a Young Girl

The powerfully poignant diary of Anne Frank, who spent two years hiding from the Nazis, with her family in the cramped “Secret Annexe” of an office building, often shows up on the banned book list. Although concern over sexually explicit material is the reason usually cited, once in 1983 the Alabama State Textbook Committee tried to ban it because they thought the diary was “a real downer.” Ages: 10-13

Sylvester and the Magic Pebble

This story of a donkey who wishes himself into a rock set off alarm bells with the Illinois Police Association. In 1977 they challenged the book because the police are depicted as pigs in the story. In the aftermath, it was banned in many parts of the U.S. Ages: 3-7

If you cringe every time you read Junie B. Jones to your kids and she “runned speedy quick” or “did a shrug” or commits some other crime against grammar, you’re not alone. In fact, most of the challenges to this series are about Junie’s speech patterns and the fact it might encourage young readers to follow suit. Ages: 6-9

This book has been banned by a North Carolina school district claiming that the book taught children to be transgender. Jacob's New Dress is actually about acceptance and anti-bullying when Jacob wants to wear a dress to school. Ages: 4-7

Maus has been banned in a Tennessee county for profanity, nudity, violence and suicide, although it presents the argument of how to honestly portray the Holocaust without those things. Maus is a Pulitzer-prize winning graphic novel that follows Spiegelman's parents' traumatic interment at Auschwitz. Ages: 11 & up

New Kid was written by author Jerry Craft about his own life experiences, then a Texas school district banned it for "Critical Race Theory and Marxism." When Jordan Banks starts at a new private school, he was one of the only students of color, and he discovers this new struggle of fitting in when there is very little diversity. New Kid is the winner of the Newbery Medal, the Coretta Scott King Author Award and the Kirkus Prize for Young Reader's Literature. Ages: 8-12

The Best Indie Bookstores for Kids in Every State (& D.C.!)

The 51 BEST Bedtime Stories of All Time 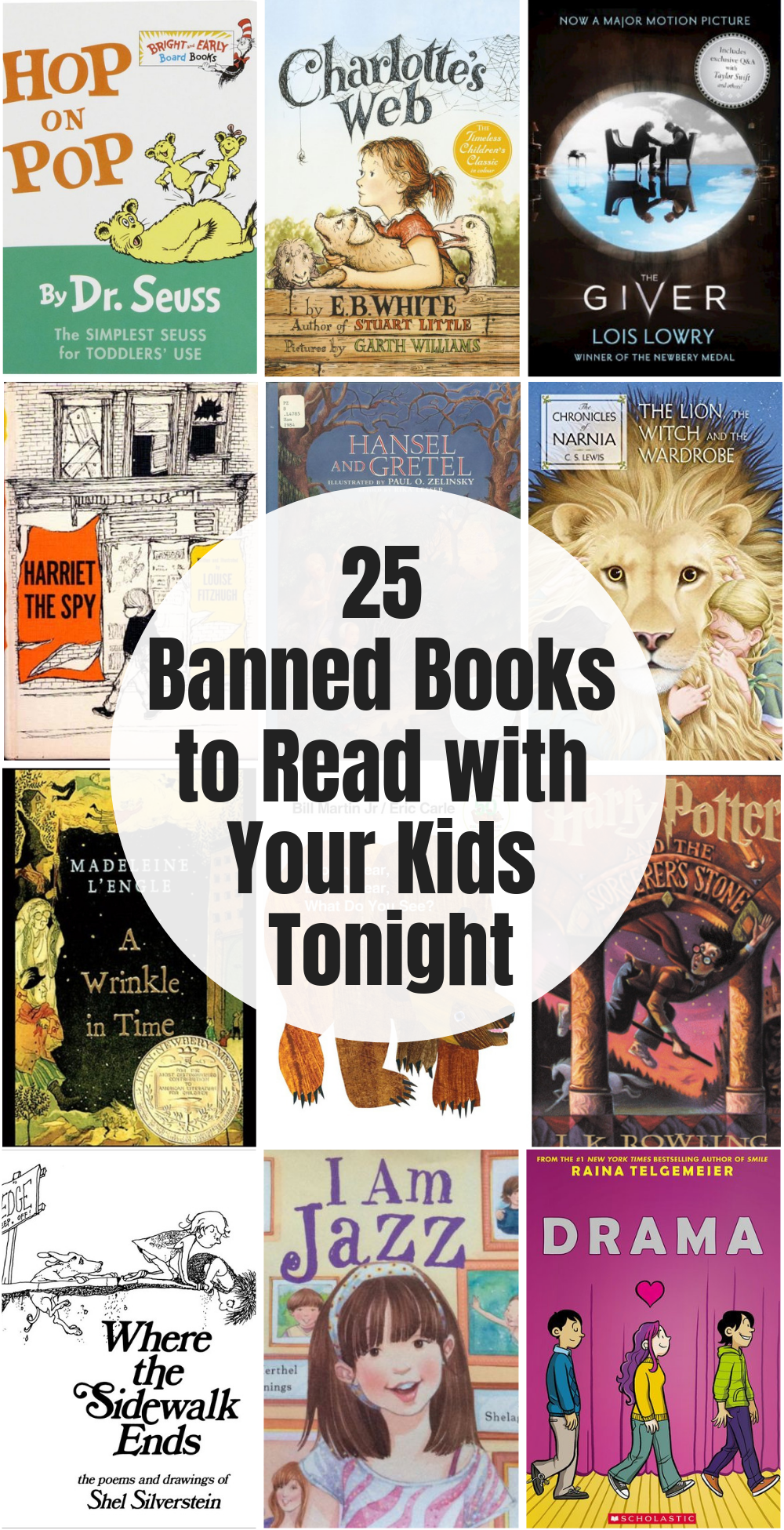