Kid’s music has come a long way from “The Wheels on the Bus.” These days, artists stand out with tunes that are everything from super-meaningful to super-silly. Why? The bottom line is, if kids won’t listen, it’s not going to get played, while at the same time if it annoys you, it’s gonna get shut off. To help you create the perfect family playlist, we listened to a heap of new and cool kid music and found the best of the best in 2020 (so far). Don’t be surprised if you find yourself listening to some of these while no one else is around! 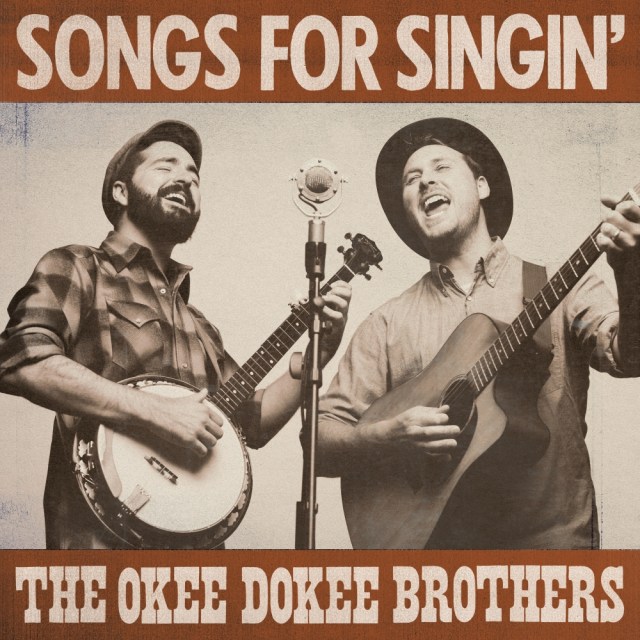 'Songs for Singin' by The Okee Dokee Brothers

Justin Lasing and Joe Mailander are the Okee Dokee Brothers, and we wish we were friends with them. We love these guys. They speak truth in tunes like “Campin’” (“Campin’ is fun. Campin’ is fun. If you say it enough, campin’ is fun.”) and Grandmaderation (about how grandma stays young). You’ll get the biggest bang for your buck with this two-CD collection with songs loosely separately by “Day” and “Night.” The set features 27 blue-grassy songs and a songbook complete with lyrics and guitar chords. The songs range from silly to the sweet all done in the spirit of American fold legends Woody Guthrie and Pete Seeger. The “Day” CD focuses on the joys of daytime while “Night” starts out with “Raise a Ruckus” and other energetic tunes before slowly winding down with “Hushabye.” Songs for Singin’ include a variety of musical instruments too. There’s a lot to take in here and enjoy. 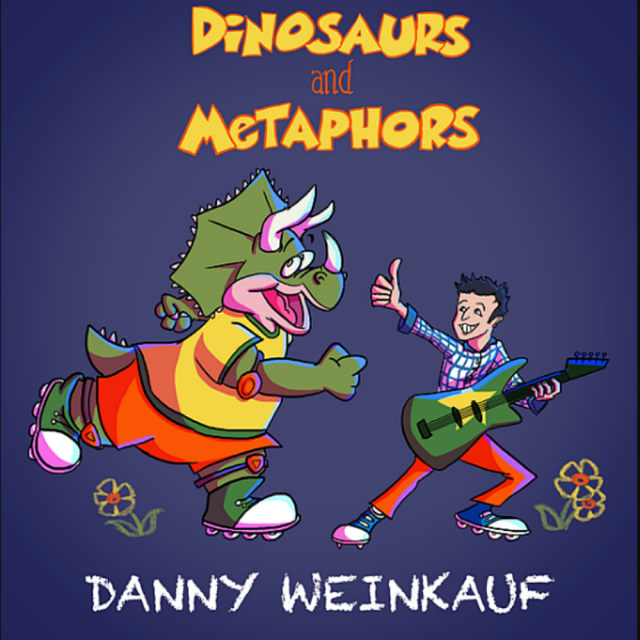 'Dinosaurs and Metaphors' by Danny Weinkauf

This isn’t Danny Weinkauf’s first rodeo. In addition to performing as a bassist in the band, They Might Be Giants, Dinosaurs and Metaphors is Weinkauf’s fifth album for children and families. The 15-song album doesn’t take itself too seriously. It’s a hodgepodge of toe-tapping tunes that won’t annoy parents with fun titles like “Dinosaurs on Roller Skates,” “My Nose Knows” and “Your Love is a Metaphor.” It features a few light lessons too, like how to change one’s perspective of a certain day of the week (“Hooray it’s Monday!”) to learning how to be brave with a barber (“Don’t Want a Haircut”). You might be tempted to skip over the song, “Cut the Cheese,” but your kids will love it, and after a listen or two, you'll probably think it’s quite clever too. 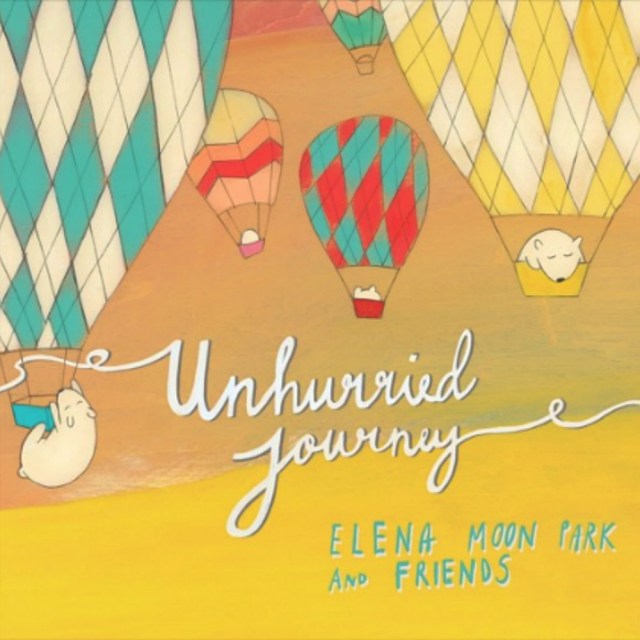 This 15-song collection by world-traveling musician Elena Moon Park is the most unique on this list. After playing with different artists all over the world for eight years, this album brings it all together with a crazy mix of east and southeast Asian music and western-style songs. It is also filled with sounds of nature, encouraging listeners to take time to listen to quiet sounds that surround us. While some songs like “Brilliant New Idea” and “Unhurried Journey” are pretty mainstream, a lot of this new album is about music appreciation with a lot of cultural influence. 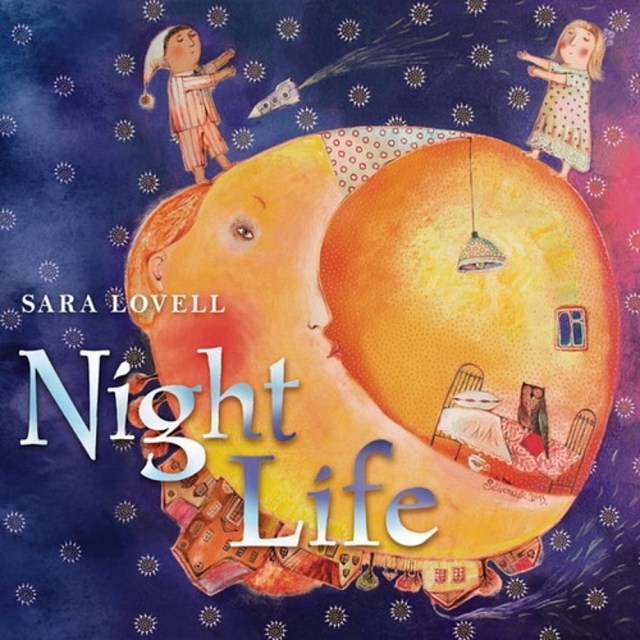 Night Life is Lovell’s third kid’s music album, which showcases a variety of musical styles and genres while going along with the theme of “what happens between the resistance and the surrender when day turns to night.” Lovell’s voice is lovely, and her music stylings are beautiful. We could listen to “I Don’t Want to Go to Bed” all day long. It’s catchy and contains very clever lyrics. While technically a lullaby album, Night Life starts offs with a little more energy than one would expect, but soon, the tone quiets down to nice peaceful rhythms, which isn’t much different than how our kids usually settle in for the night. There is even a song dedicated to mom and dad entitled, “Lullaby for Grownups” that teaches kids and parents the importance of bedtime rituals. 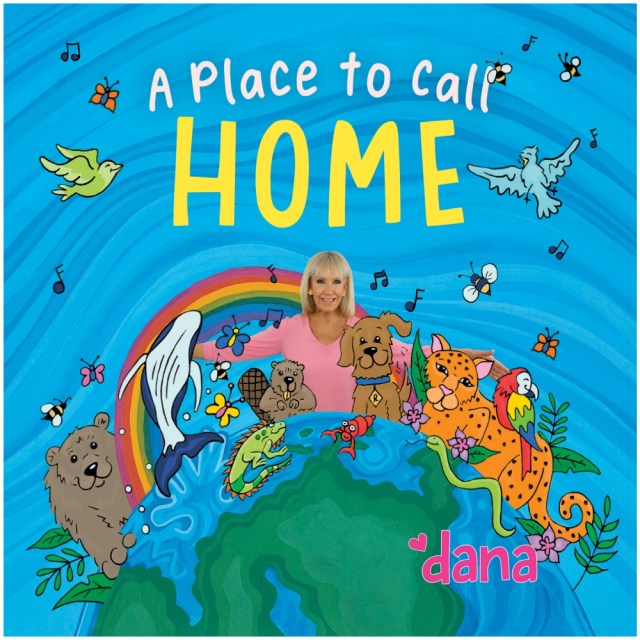 'A Place to Call Home' by Dana

With a theme about how every living thing has a place that they call home, this album surprised us. With fun, rockin' tunes like “Underground Traffic Jam” about animals who burrow their way and meet up with others, it’s a lot of fun. Other songs focus on other animal homes, including beavers (“Let’s Build a Dam”), bees (“Honey Bee Bee Bop”) and a hermit’s crab relentless quest to find another place to stay (“Movin’ Day”). The album not only represents a variety of musical genres but it also naturally appeals to a child’s love of animals. It is almost impossible to listen and not start singing along. 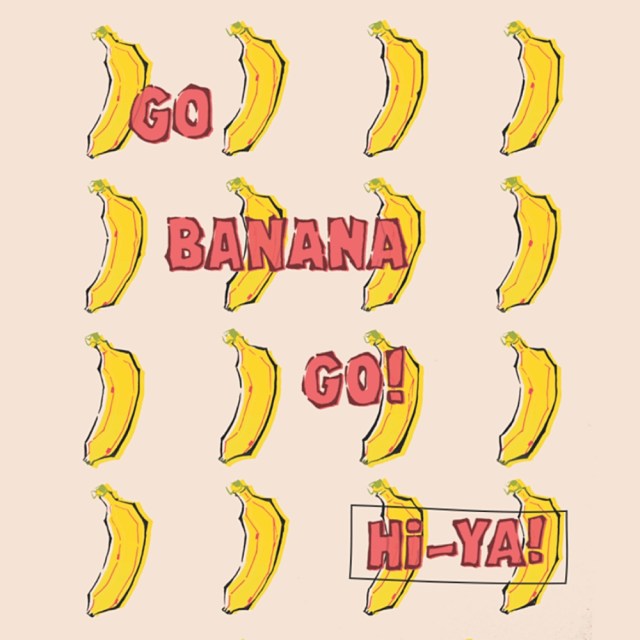 For something completely different … Hi-Ya’s high energy album is full of silly fun. Created by Jim Roach and Brian Wecht, this is their first family-comedy album, and we suspect it won’t be their last. From the get-go, very little makes sense here with song titles that include “Pizza Feet,” “Super Cow” and “Stinky Diapers.” The band also sneaks in a few worthwhile lessons, including one about how to get along with others “Queen of No Share,” bedtime business (“Brush and Brush and Brush”) and even a silly German language lesson. Perhaps the cleverest bit is “Dinosaur Chicken Nugget,” about a woman who freaks out when she discovers that one of her chicken nuggets is shaped like a dinosaur. Comedy gold. 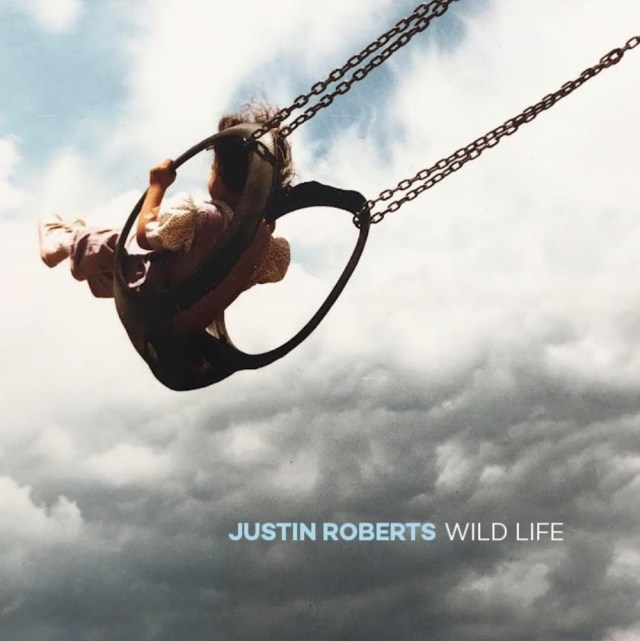 This is Roberts' 14th album of original songs for children, and Wild Life goes a completely different direction than his prior work. In fact, it's more of a lullaby album for parents rather than children. Including an eclectic group of instrumentalists like pianist Lisa Kaplan (Eighth Blackbird), baroque cellist Anna Steinhoff, percussionist Gerald Dowd (Robbie Fulks) and vocalist Nora O’Connor (Flat Five, the Decemberists), Roberts says this collection of songs is his most personal project yet. It was inspired by the pregnancy of his wife and is filled with musings about his daughter. With songs like “Maybe She’ll Have Curly hair” to “When You First Let Go,” this album is tender, full of love and would make a great gift to an expecting couple. We can totally see this as the go-to album when trying to get a cranky little one to nod off during a long road trip.

Order it or download it from Amazon it here. 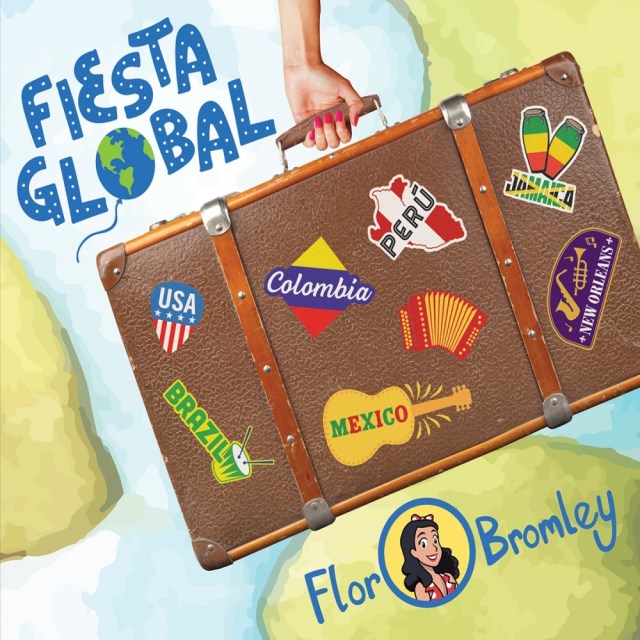 You might say that Flor Bromley is an over-achiever. She is a bilingual recording artist, singer/songwriter, actress, storyteller and puppeteer. Fiesta Global is her second children’s album which is a Latin-fusion party for kids celebrating the creativity, color and rhythms of Latin culture. It includes a variety of Latin performers including 123 Andrés, Noemi Gasparini, Damaris, Claudio Vega, and Jazzy Ash. The album begins with the introduction song “Fiesta” welcoming kids to the party then transitions to a short history lesson in “We Came to America” before plunging into a vibrant world of music. 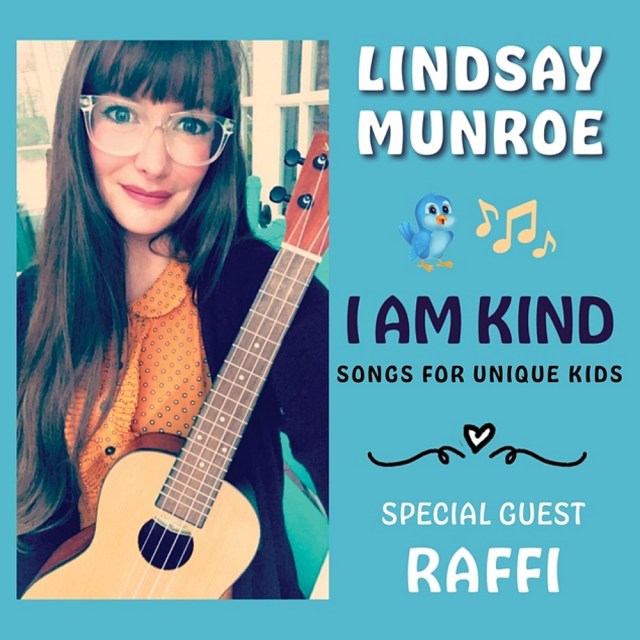 'I Am Kind' By Lindsay Munroe

The iconic children’s musician Raffi Cavoukian’s own record label, Troubadour Music, is proud to release a new artist, Lindsay Munroe. Not only does Munroe receive Raffi’s blessing, but he sings with her on the new album as well. It is somewhat of a throwback to a time of simpler children’s music with classic tunes like “This Little Light of Mine,” “Frère Jacques” and “The More We Get Together” along with folk songs like “Peace Like a River” and “Bluebird Bluebird” and some original tunes too. Raffi joins in while also playing guitar, ukulele, electric piano, bongos, and train whistle. Not bad for a 71-year-old. 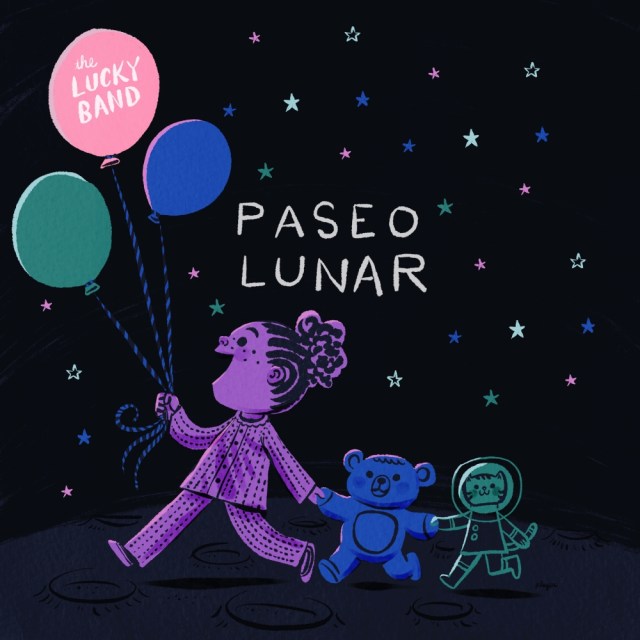 'Paseo Lunar' By The Lucky Band

A Red Tricycle favorite, The Lucky Band is back with a new release that has a surprisingly quieter tone than their usual upbeat and danceable music. The band, which consists of Lucky Diaz and his wife Alisha Gaddis, had just returned from a whirlwind tour and found themselves exhausted with a four-year-old that didn't sleep. "Everything we've done lately is so big and so amped. We wanted to make something really simple," says Diaz. “I hope this work can help soothe families and help the little ones to sleep. We can all use a bit of rest." The result is a collection of beautiful, slowed-down Latin tunes that are sure to relax restless souls even if you don’t understand the words. We especially like “Goodnight My Love.”

Press Play: Why Music Is Beneficial to Your Kid’s Development

3 Cool Reasons Parents Should Use Music in Their Instagram Stories