A bagel is one of those 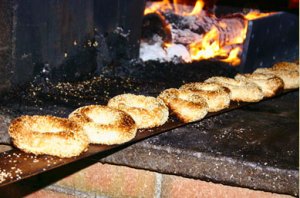 perfect foods for kids that moms count on, especially on the go. We don’t have a bagel culture in Seattle like they do in New York, but Eltana Wood-Fired Bagel Café may change that. The café is only about three months old, but it’s been getting great buzz for its hand-rolled bagels that are boiled in honey water and then baked in a wood-fired oven. The result is a deliciously chewy bagel with a hint of char/smoke. Bagel flavors include: plain, salt, sesame, sesame wheat, poppy, everything, and wheat.

You can get regular cream cheese on your bagel, but Eltana specializes in Eastern Mediterranean flavors. Try the date-walnut cream cheese, eggplant-pomegranate spread, or the caramelized onion hummus. On the sweet side, the fig-apricot compote is a kid favorite. If you go at lunchtime, you also can order soups and salads, such as lentil-bulgur-feta or crispy chickpea and leek. There is room for a stroller or two, but the space isn’t meant to be a romper room. The atmosphere is casual and there’s enough ambient sounds to muffle the occasional screech. Another benefit of going to Eltana: It’s just down the street from Izilla Toys!