There’s no doubt – Seattle has soccer fever… or maybe we should call it by its proper name, football. The Seattle Sounders Football Club has won the hearts of Seattleites — including soccer obsessed kids and families – and having just kicked off their third season.  Families across the city are already anxious to get to Century Link Field to watch them play. “But wait a minute,” you must be saying to yourself right now, “Kids? At a major sporting event? Are you sure?” We are! This family outing will be a far cry from an afternoon at the park and can take some advanced planning, but a Sounders match is, by far, the hottest new kid-friendly activity in Seattle. 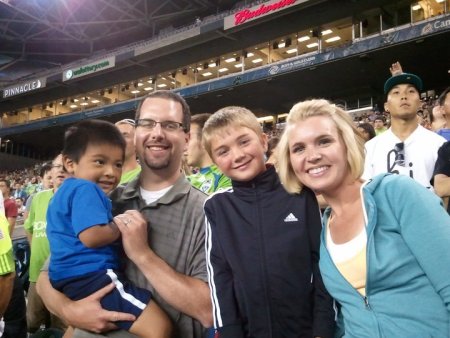 Let us help you make it the best it can be with these insider tips for taking kids to a Seattle Sounders FC match.

1. Buy tickets in advance. Seems obvious, right? As cool as taking your kids to a Sounders match may be, it will be much better if you do some planning, rather than go on a whim. Tickets can be purchased online easily and you can even print them right at home to avoid standing in that never ending will-call line at the stadium.

2. Kids under three go for free. The littlest Sounders fans must have their own ticket when they turn three years old, but they are free until then, provided they sit on the lap of a parent during the match. Is a Sounders match a good idea for the pre-three crowd? Probably not (read more below for why…) but in case you’re planning on bringing your tot, remember that they don’t need their own ticket.

4. The closer you sit to the field… That being said, a good rule of thumb, when purchasing Sounders tickets for your family, is that the closer to the field you are, the rowdier and more enthusiastic the fans will be. There’s no doubt that soccer fans are a passionate bunch, so save those lower section seats for a date-night match and bring it back a bit for a more mellow, family-friendly crowd for a match with the kids along. 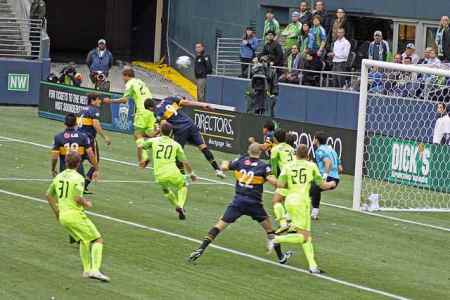 5. Park as close as you can afford. Parking around the stadium is pricey and if you’re driving to Sodo and don’t want to walk three-miles from your car, park as close to the stadium as you can stand to pay. Another great option? Drop off one parent and the kids at the passenger drop-off zone (off of First Avenue South at Railroad Way South and Occidental Avenue) – the other parent can go park the car and the kids won’t waste all their cheering energy on the walk to the stadium. Also, remember that the earlier you make it to Sodo, the easier it will be to find parking – many of the closest lots sell out on match days. Coming by bus or Light Rail? Check out the Sounders’ Transportation Guide for more info on how to get to the stadium easily.

6. Hit up Autograph Alley on the way in. Before you get to your seats, stop by Autograph Alley booth – the first 50 kids (ages 14 and under) who spin the wheel and land on a winning space get a wristband to get three player autographs after the game. The Sounders even provide the memorabilia to be signed – bonus!

7. Let’s talk about food. The bad news? Food at the stadium is super expensive… and kind of a pain to go get when you’re trying to direct some very short fans through a sea of people who are looking for the closest beer station. The good news? You can bring your own food and drinks! Be sure to leave any glass containers at home and be prepared to have to go through the bag search line to enter the stadium, but packing snacks, juice boxes and treats can easily save this family outing. Water bottles need to be plastic, store-bought and still factory sealed (to make sure that water isn’t actually alcohol… not that any of you parents would ever try that trick, right?), pack all your food in clear, plastic gallon Zip-Lock-style bags so that they can easily see what’s inside, and use a tote, rather than a backpack, to haul it into the stadium. Be sure to throw an extra plastic bag in there too, for packing up your food garbage as you eat – much better than having it all piled around your feet.

8. What to wear. If you’re ever been to Century Link, you know that it’s an open-roof stadium and even on the sunniest Seattle days, it can get a bit breezy, particularly on the upper-levels. Layer up with clothes that are lightweight and can easily be peeled off as the sun shines or put on as the sun goes down and it gets chilly. Hats and sunglasses (if your kids will wear them) and comfy shoes are a must too! 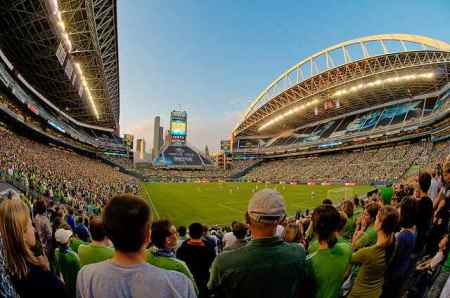 9. Be prepared to stand up… the entire time. No matter where you sit during the match – from the seats down close to the field to the seats furthest away – plan on standing up for the entire match… because the entire stadium will be on their feet, cheering on the Sounders for all 90+ minutes. This is a great way to determine if your kiddos are old enough to go to a Sounders match – do you think that can last that long on their feet? If not, consider waiting one more year…

10. Get VIP access for your kids. Before you attend your first Sounders match with the kids, sign-up them up for the Sounders FC Junior Alliance online! It costs $10 per child, but they’ll receive their own custom Junior Sounders Scarf in the mail to wear to the match, plus access to a ton of other cool VIP kid Sounders events.

For detailed information about attending a Sounders game, read the Stadium Guide, where you can find the specific rules about what you can and cannot bring into the stadium, guidelines about food and beverages, what to do if you are separated from your child and more.

What is the number one piece of advice you’d share with other parents considering making a Sounders match a family outing? Tell us in the comments section below!