Do you have a picky eater? Try Chinese food this time. Dim sum restaurants are a great 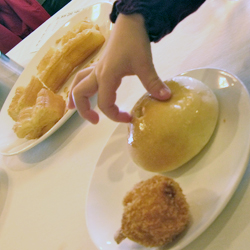 place to take kids. Servers present a variety of foods in small portions that are served on rolling carts. The atmosphere is fun and family-focused. The service is lighting fast. And the food keeps coming so there’s no waiting. Because everyone picks exactly what he or she wants, even picky eaters will find something they like. And it’s all inexpensively priced.

What to order: New to dim sum? Favorites for kids include BBQ pork buns, dumplings, potstickers, and tasty desserts like egg custard tarts. Even if your kids are picky eaters, they will love picking items off the carts.

What is THAT? Sometimes your servers will speak English; sometimes they won’t. So you’ll just have to trust your instincts. (There’s a 50/50 chance that dumpling or potsticker has shrimp or pork in it.)

When to go: Avoid lines by going for weekday lunch. On weekends, go before noon, when the lines begin forming. This is particularly true at very popular restaurants like Wong’s King and Ocean City.

Where to go: You would expect to find Portland’s best dim sum in historic Chinatown downtown. But most of the best eateries can be found on 82nd Avenue, what many people call “the new Chinatown.”

Before you go: Download this PDF guide to common dishes. Books like Dim Sum for Everyone are also a fun way to introduce your child to dim sum.

Wong’s King, 82nd Avenue
The dim sum options go on and on at Wong’s King and are all unbelievably good. Kids will love the large fish tanks.

Fong Chong, Chinatown/Old Town
Not the best dim sum in Portland, but if you’re in Chinatown visiting the Classical Chinese Garden and craving dim sum, try this stand by. It’s kind of a dive and the restrooms are grungy, but the dim sum is solid. Bonus: The dim sum carts roll on all day.

Jin Wah, Beaverton
Not a fan of waiting in line for dim sum?  Head to Jin Wah on the west side of town.