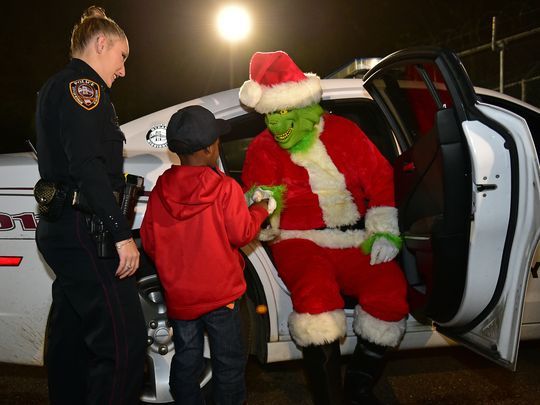 We all know the Grinch and how his “ginchiness” nearly ruined Christmas. Yeah, yeah, he’s a fictional character. You understand that — largely because you’re an adult and have no illusions (or delusions) that there’s really a furry green character lurking in your home, ready to steal Christmas away. But the kiddos don’t feel the same. To the mini moviegoer (or TV watcher) the Grinch is kind of real. And to one 5-year-old, he is incredibly real.

When 5-year-old TyLon Pittman watched the Grinch videos he wasn’t exactly thrilled that the whole ruining the holidays thing. The plan that the Grinch cooked up didn’t sit right with TyLon and he wasn’t going to let anything happen to Christmas.

What do you do when someone is threatening to commit serious grinchiness? In TyLon’s case, you call 911. Yep, the little boy called 911 in his town of Byram, Mississippi. Knowing that the police are there to help, he made the call and alerted the officials of the Grinch’s not-so-nice plans.

When Officer Lauren Develle heard about the boy’s 911 call she drove to his home to let TyLon know that the police would certainly stop the Grinch. When Officer Develle asked TyLon what he’d do if the Grinch try to steal Christmas he replied, “I want y’all to come back to my house and take him to jail.”

As it turns out, the police did indeed “catch” the Grinch. They even invited TyLon to come to the station and help to lock him up. During his trip to the police station, TyLon (who wants to be a police office when he grows up) was made an honorary junior officer.

What do your kids think about the Grinch? Tell us in the comments below.