First birthdays are a really big deal. Sure, the birthday boy or girl just sort of “shows up” to the party, but parents and friends have a real reason to celebrate. That’s exactly why Tyler’s parents decided that they wanted to throw a very special party for their son inspired by his favorite book The Very Hungry Caterpillar by Eric Carle. With careful prep work and a few shortcuts, Tyler’s parents were able to turn the dining hall of their go-to restaurant into a party-worthy space for Tyler and all of his guests. Between the large balloon sculpture, the bubble entertainer, and the tasty food offerings, Tyler’s parents sure had their hands full managing the party guests. So they called in a little backup and asked superstar photographer Sue Choi to capture all the hilarious and precious moments of the party. Thanks to Tyler’s parents and Sue Choi Photography, we’re able to share all the fun memories from Tyler’s special day. Check out all the hard work that went into planning this cool caterpillar party. 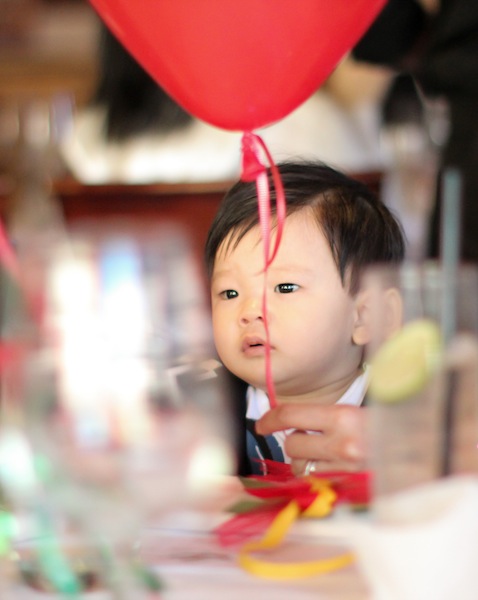 Tyler’s parents were inspired by the book The Very Hungry Caterpillar and it’s colorful illustrations. They own the 40th anniversary pop-up edition and the Chinese language version, and because it’s one of the birthday boy’s favorite stories, his parents thought it was the perfect theme for their little man’s first birthday. The party took place at Kingfish Restaurant in San Mateo. With it’s New Orleans-influenced menu and brightly-colored decor, Tyler and his family were already big fan of Kingfish and its authentically delicious beignets. The large hall upstairs seemed like the perfect place to throw Tyler’s very first party. We love the red and green balloons that look like floating caterpillars all throughout the party! 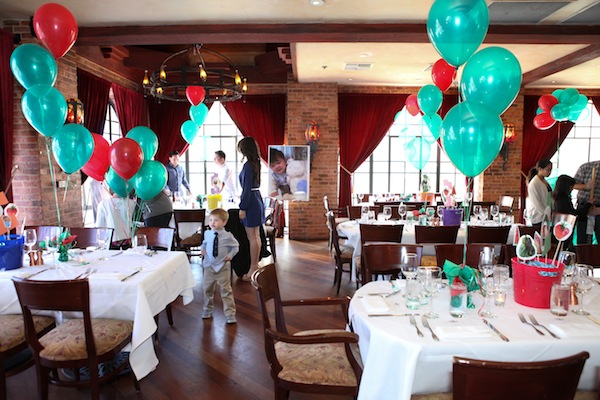 We have to hand it to Tyler’s parents–they created just about every decoration at the party. The centerpieces and banners alone took three days to complete. Tyler’s mom printed images of the foods from The Very Hungry Caterpillar and hot-glued them to wooden dowels. Then they were arranged into a bouquet alongside a big construction paper cutout of the number 1 in fun colored buckets and set atop the tables. The big photos of birthday boy were created by Tyler’s dad, who glued giant poster-sized pictures onto foam board and set them up in a little gallery. 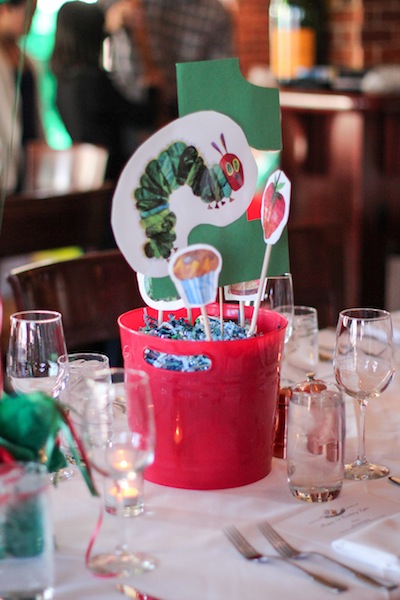 Anyone who’s a fan of The Very Hungry Caterpillar knows that both kids and caterpillars have very big appetites. 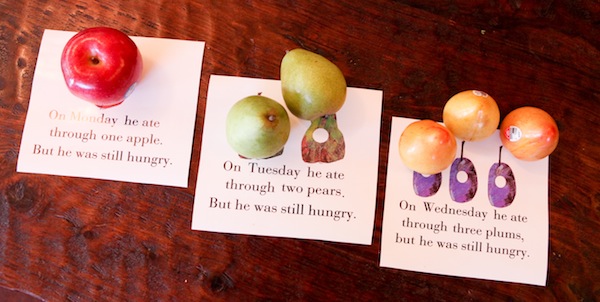 Tyler’s parent’s literally brought the star of Tyler’s favorite book to life with the coolest balloon animal we’ve ever seen–a larger-than-life balloon caterpillar! Little partygoers loved taking photos with the giant balloon creation with its googly eyes and silly smile. The balloon caterpillar was designed and delivered by a local balloon company.

For treats, local bakery Sibby’s Cupcakery created green cupcakes that Tyler’s parents arranged into a caterpillar shape and added a fun construction paper face. These little bites were perfect for the kids to grab and go. One thing’s for sure, that’s one caterpillar we wouldn’t mind taking a bite out of! 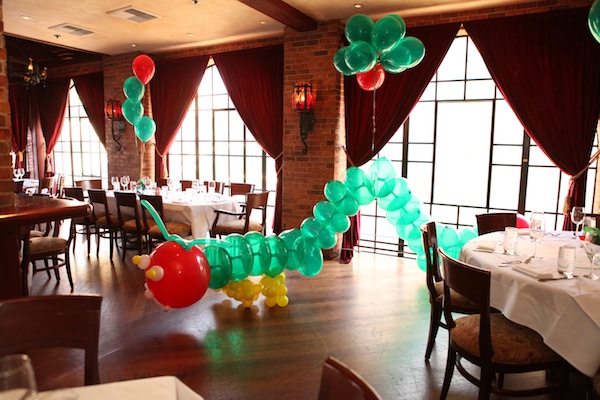 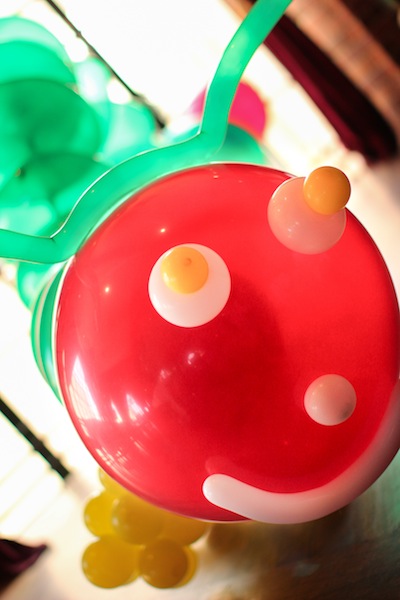 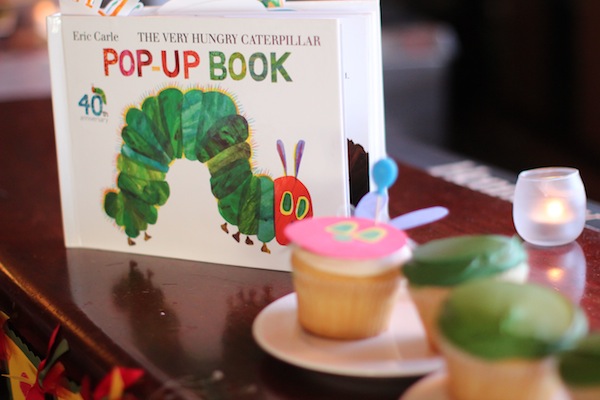 To add a little more fun to the party, Tyler’s guests were treated to the whimsically entertaining Bubble Lady. Far and away the biggest hit at the party, this bubble-rific entertainer was able to capture the attention of a room filled with kids (and parents) for a full 30 minutes. Kids stepped inside of a bubble tube, blew giant bubbles, and even got some bubble haircuts. Tyler was thoroughly impressed, as “bubble” was one of the first words he learned to say! 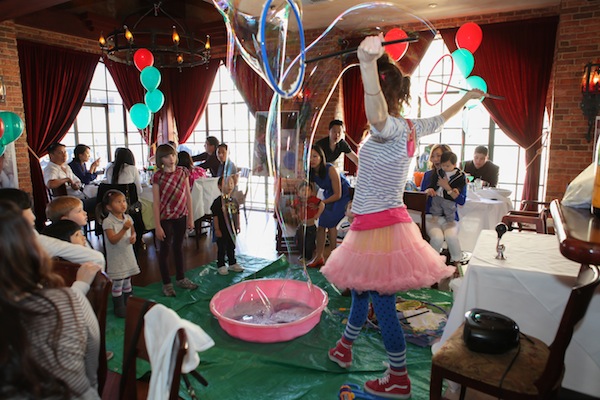 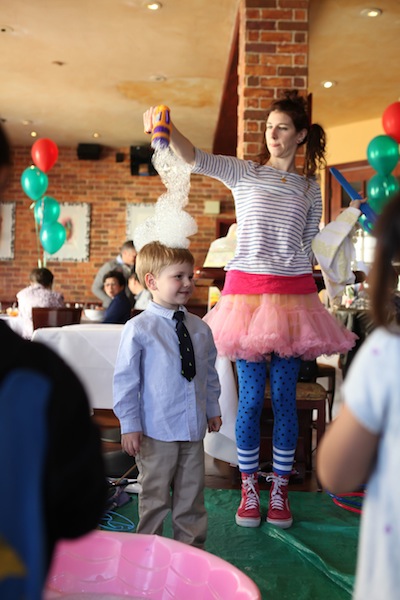 By the looks of the photos, Tyler’s party was a huge success. When asked what they would have done differently,  Tyler’s parents said the only change would be to have everyone order their food earlier. With such a large group the food understandably took awhile to serve–especially since Tyler arrived late due to his scheduled morning nap.

Before leaving, each of Tyler’s guests were given some bubbles to work on their bubble blowing skills at home. For favors, Tyler’s mom used green chocolate malt balls and red chocolate-covered cherries to create tiny chocolate caterpillars. She combined these with custom ordered chocolate butterfly lollipops to make a little treat bag to remind everyone of how much fun they had at Tyler’s party. 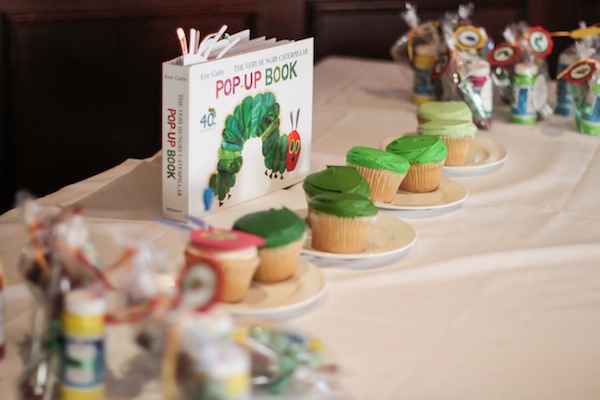 So how do we pull of a party like this for our birthday babies? Tyler’s mom suggests looking online for printables, saving her precious time and resources. She also recommends looking around for tips to make the DIY portions easier. As a newbie to the DIY and craft scene, Tyler’s mom knew that these projects would take a long time, making her all the more grateful for the shortcuts she came across online. 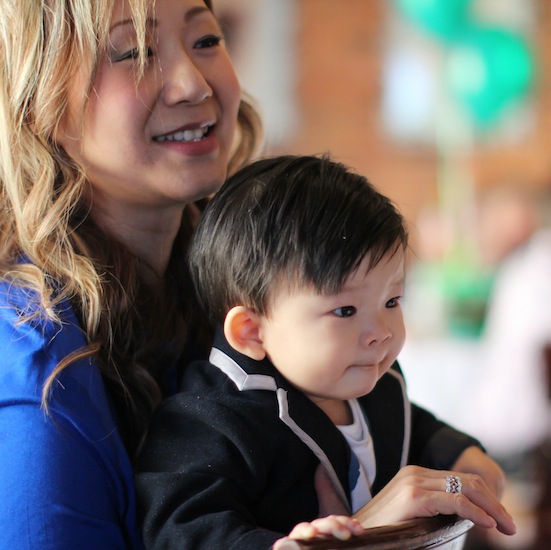 Not bad for a first attempt at planning a DIY party! We can only imagine what Tyler’s parents have planned for their little guy’s second birthday.

What do you have planned for your upcoming birthday? Which of these ideas inspired you?

A very special thanks to Tyler’s parents and Sue Choi for all their help!